Out of Segregation, Pelican Bay SHU 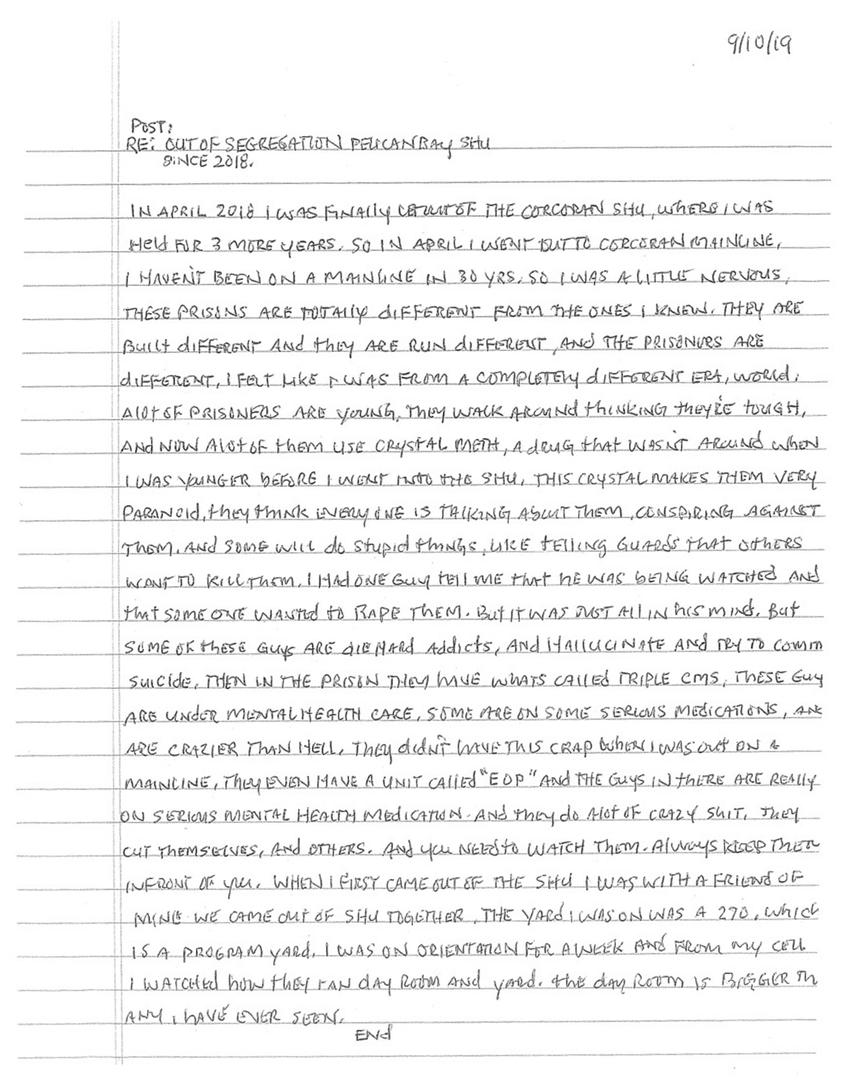 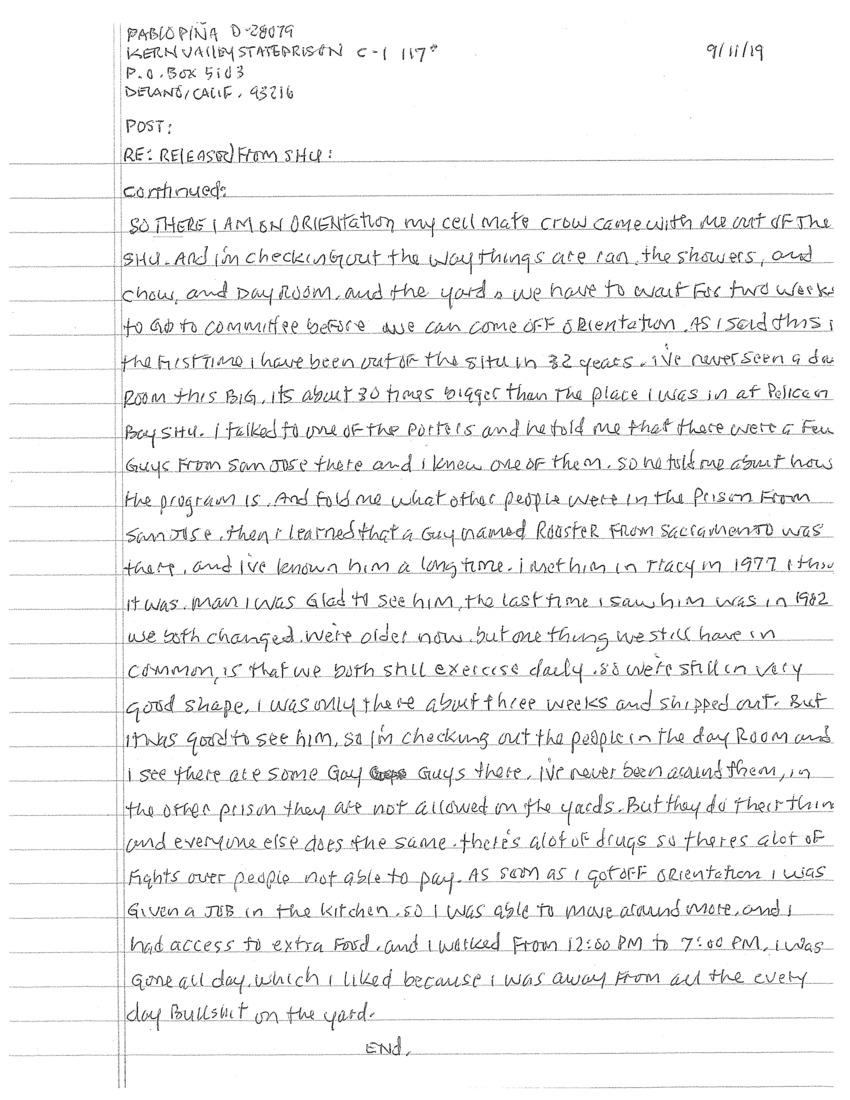 Post:
Re: Out of Segregation Pelican Bay SHU
Since 2018

In April 2018 I was finally let out of the Corcoran SHU, where I was held for three more years. So, in April, I went but to Corcoran Mainline. I haven't been on a mainline in 30 years, so I was a little nervous. These prisons are totally different from the ones I knew. They are built different and they are run different, and the prisoners are different. I felt like I was from a completely different era, world.

A lot of prisoners are young. They walk around thinking they're tough and now a lot of them use crystal meth, a drug that wasn't around when I was younger, before I went to the SHU. This crystal makes them very paranoid. They think everyone is thinking about them, conspiring against them. And some will do stupid things, like telling guards that others want to kill them. I had one guy tell me that he was being watched and that someone wanted to rape them. But it was just all in his mind.

But some of these guys are die hard addicts. They hallucinate and try to commit suicide. Then in the prison they have, what's called Triple CMs, these guys are under mental health care. Some are on some serious medications and are crazier than hell. They didn't have this crap when I was out on a mainline. They even have a unit called EOP, and the guys in there are really on serious mental health medication. And they do a lot of crazy shit. They cut themselves and others. And you need to watch them. Always keep them in front of you.

When I first came out of SHU, I was with a friend of mine. We came out of SHU together. The yard I was on was a 270, which is a program yard. I was on orientation for a week and from my cell, I watched how they ran dayroom and yard. The dayroom is bigger than any I have ever seen.

RE: Release From SHU
Continued

So there I am on orientation. My cellmate Crow came with me out of the SHU. And I'm checking about the way things are ran. The showers, the chow, and dayroom. And the yard.

We have to wait for two weeks to go to committee before we can come off orientation. As I said this, the first time I have been out of the SHU in 32 years. I've never seen a dayroom this big. It's about 30 times bigger than the place I was in at Pelican Bay SHU. I talked to one of the portels and he told me that there were a few guys from San Jose there and I know one of them. So, he told me how the program is. And he told me what other people were in the prison from San Hose.

Then I learned that a guy named Rooster from Sacramento was there. And I've known him a long time. I met him in Tracy in 1977, I think it was. Man, I was glad to see him. The last time I saw him was in 1982. We both changed. We're older now. But one thing we still have in common is that we both still exercise daily. So, we're still in very good shape. I was only there about three weeks and shipped out. But it was good to see him.

So, I'm checking out the people in the dayroom and I see there are some gay guys there. I've never been around them. In the other prison, they are not allowed on the yards. But they do their thing, and everyone else does the same.

There's a lot of drugs, so there's a lot of fights over people not able to pay. As soon as I got off orientation, I was given a job in the kitchen. So I was able to move around more, and I had access to extra food. And I walked from 12 PM to 7 PM. I was gone all day. Which I liked because I was away from all the everyday bullshit on the yard.

Hey Daddy,
I don't believe I have ever stressed to you just how much I love you... That if I had a choice between having you as my father or some other mutha fcka who would be actively around/in my life from the day I came home from the hospital... I would still choose you bcuz you are an amazingly strong intelligible man who doesn't just love me bcuz I am his blood kin. Please forgive me for saying and thinking like this but I really think God fckd up when he took you from me and left me in the unloving and uncaring selfish & heartless monster of a mother. 36 years Daddy, all I have ever wanted was to know what it was like to have just one parent who would die for you, kill for you, comfort you, love you and support you or just pull threw in the clutch when you need it the most... Linda has never been any of Those Things or even remotely close. Hell she has never showed one kind gesture, said a kind word to me. I would go back repeatedly making excuses for why she said and did the things she did to hurt me, I kept telling myself she didn't mean none of it, all I ever wanted was my mommy but I would never be good enough for her time,attention or love when I was the only one who wanted to be around her, the only one who helped her. At 15 Dad I had dropped out of school and got me G.e.d. so I could work full time and pay the bills and take care of my two younger sisters and baby brother while she shot up and I cleaned up her messes. I hate her Dad, it should've been her and not you. You should be out here with me, that bitch is so cold hearted I don't understand why God continuously let's her walk this earth. It's not fair Dad! I apologize to for not being the daughter you deserve. I have been shitty, I need you in my life Daddy! I was talking to my homegirl while I was locked up in county doing 6months when I realized why I was going down the road I have been for so long and it was bcuz I was alone, I was lost so I hung out with drug dealers and gangsta's becuz I somehow wanted to feel close to you. And I have met some really amazing ppl who are more family than my blood. It's sad it not pose to be like that, Grandma Nora never raised us to be against one another. I miss her Daddy. I hope that there is a life after this one so we get the chance to do over what our hearts ache the most for. I was so busy looking for the love and acceptance in my life that I never realized that by me doing so I missed out on my children's lives. Daddy I love them and I am nothing like Linda but what I did to my kids even tho I never abused them mentally or physically don't mean I haven't hurt them as much as I hurt. I never intended to hurt them, dad please help me , they don't want nothing to do with me and I've respectfully listened to em when they asked me to leave them alone but like a coward I did that bcuz it was easier than to fight for them and lose. I couldn't stand another rejection, I wouldn't survive their rejection. Any way dad 8649084332 call me