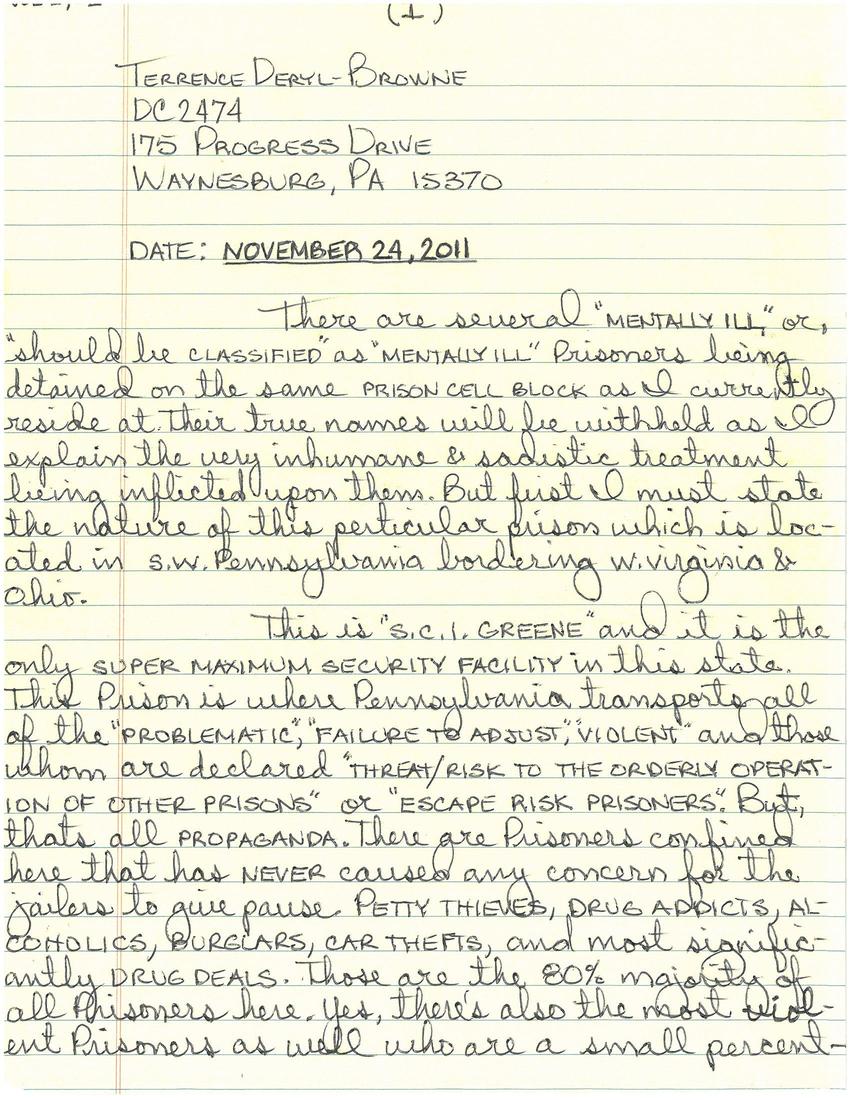 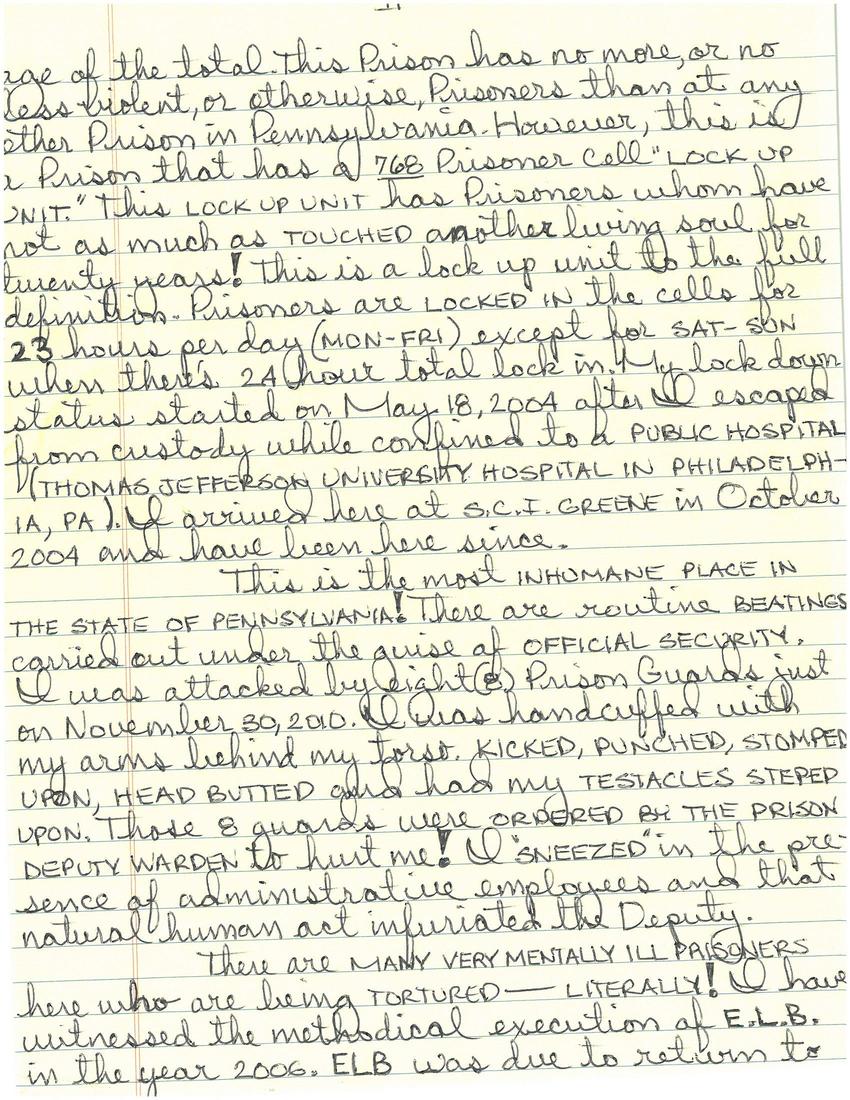 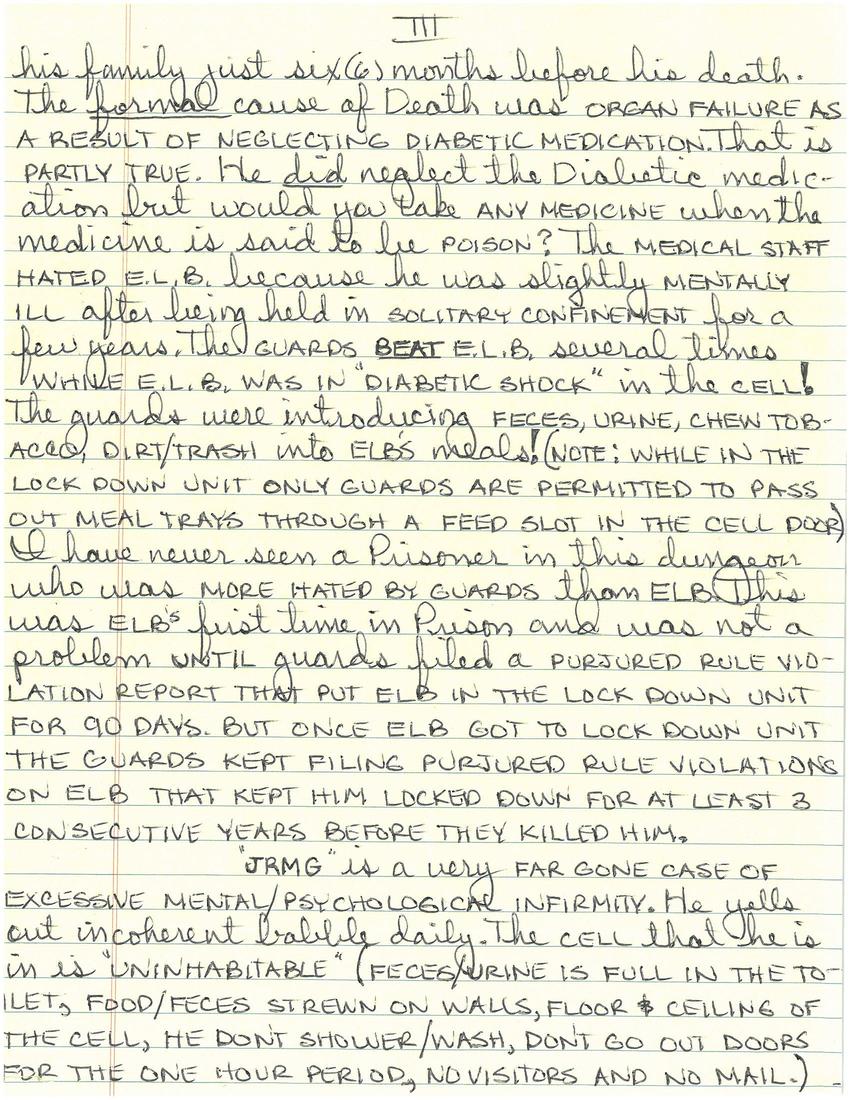 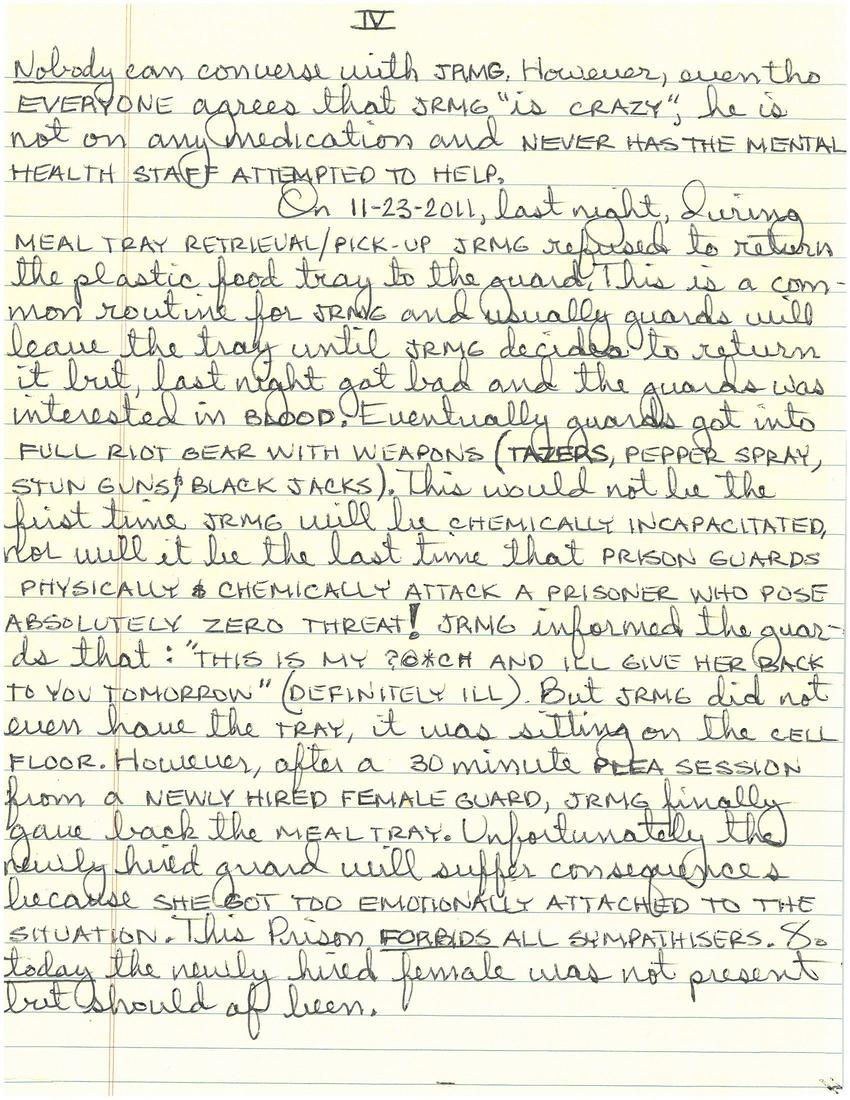 There are several "mentally ill" or "should be classified" as mentally ill prisoners being detained on the same prison cell block as I currently reside at their true names will be withheld as I explain the very inhumane and sadistic treatment being inflicted upon them. But first I must state the nature of this particular prison which is located in S.W. Pennsylvania bordering W. Virginia and Ohio.

This is S.C.I. Greene and It is the only super maximum security facility in this state. This prison is where Pennsylvania transports all of the "problematic," failure to adjust, violent, and those whom are declared a threat or risk to the orderly operation of other prisons or escape risk prisoners. But that's all propaganda. There are prisoners confined here that has never caused any concern for the jailers to give pause: petty thieves, drug addicts, alcoholics, burglars, car thefts, and most significantly drug deals. Those are the 80% majority of all prisoners here. Yes, there's also the most violent prisoners as well who are a small percentage of the total. This prison has no more or no less violent or otherwise prisoners than at any other prison in Pennsylvania.

However, this is a prison that has a 768 prisoner cell "lock up unit." This lock up unit has prisoners whom have not as much as touched another living soul for twenty years! This is a lock up unit to the full definition. Prisoners are locked in the cells for 23 hours per day (Mon-Fri) except for Sat-Sun when there's 24 hours total lock in. My lockdown status started on May 18, 2004 after I escaped from custody while confined to a public hospital (Thomas Jefferson University Hospital in Philadelphia). I arrived here at S.C.I. Greene in October 2004 and have been here since.

This is the most inhumane place in the state of Pennsylvania! There are routine beatings carried out under the guise of official security. I was attacked by eight prison guards just on November 30, 2010. I was handcuffed with my arms behind my torso. Kicked, punched, stomped upon, headbutted and had my testicles stepped upon. Those eight guards were ordered by the prison deputy warden to hurt me! I sneezed in the presence of administrative employees and that natural human act infuriated the deputy.

There are many very mentally ill prisoners here who are being tortured—literally! I have witnessed the methodical execution of E.L.B. in the year 2006. ELB was due to return to his family just six months before his death. The formal cause of death was organ failure as a result of neglecting diabetic medication. That is partly true. He did neglect the diabetic medication but would you take any medicine when the is said to be poison?

The medical staff hated E.L.B. because he was slightly mentally ill after being held in solitary confinement for a few years. The guards beat E.L.B. several times while E.L.B. was in diabetic shock in the cell! The guards were introducing feces, urine, chew tobacco, dirt and trash into E.L.B.'s meals! While in the lockdown unit only guards are permitted to pass out meal trays through a feed slot in the cell door. I have never seen a prisoner in this dungeon who was more hated by guards than E.L.B. This was E.L.B.'s first time in prison and was not a problem until guards filed a perjured rule violation report that put E.L.B. in the lockdown unit for 90 days. But once E.L.B. got to lock down unit the guards kept filing perjured rule violations on E.L.B. that kept him locked down for at least three consecutive years before they killed him.

JRMG is a very far gone case of excessive mental/psychological infirmity. He yells out incoherent babble daily. The cell that he is in is uninhabitable (feces and urine in full in the toilet; food and feces strewn on walls, floor and ceilings of the cell; he doesn't shower or wash himself; doesn't go outdoors for the one hour period; no visitors and no mail). Nobody can converse with JRMG. However, even though EVERYONE agrees that JRMG "is crazy," he is not on any medication and NEVER has the mental health staff attempted to help.

On 11-23-2011 (last night) during the meal tray retrieval and pick up, JRMG refused to return the plastic food tray to the guard. This is a common routine for JRMG and usually guards will leave the tray until JRMG decides to return it, but last night got bad and the guards were interested in BLOOD. Eventually, guards got into full riot gear with weapons (tazers, pepper spray, stun guns, and black jacks).

This would not be the first time JRMG will be chemically incapacitated, nor will it be the last time that prison guards physically and chemically attack a prisoner who pose absolutely zero threat! JRMG informed the guards that: "This is my ?@*ch and I'll give her back to you tomorrow" (DEFINITELY ILL).

But JRMG did not even have the tray. Unfortunately the newly hired guard will suffer consequences because she got too emotionally attached to the situation. This prison forbids all sympathizers. So today the newly hired female was not present but should have been.