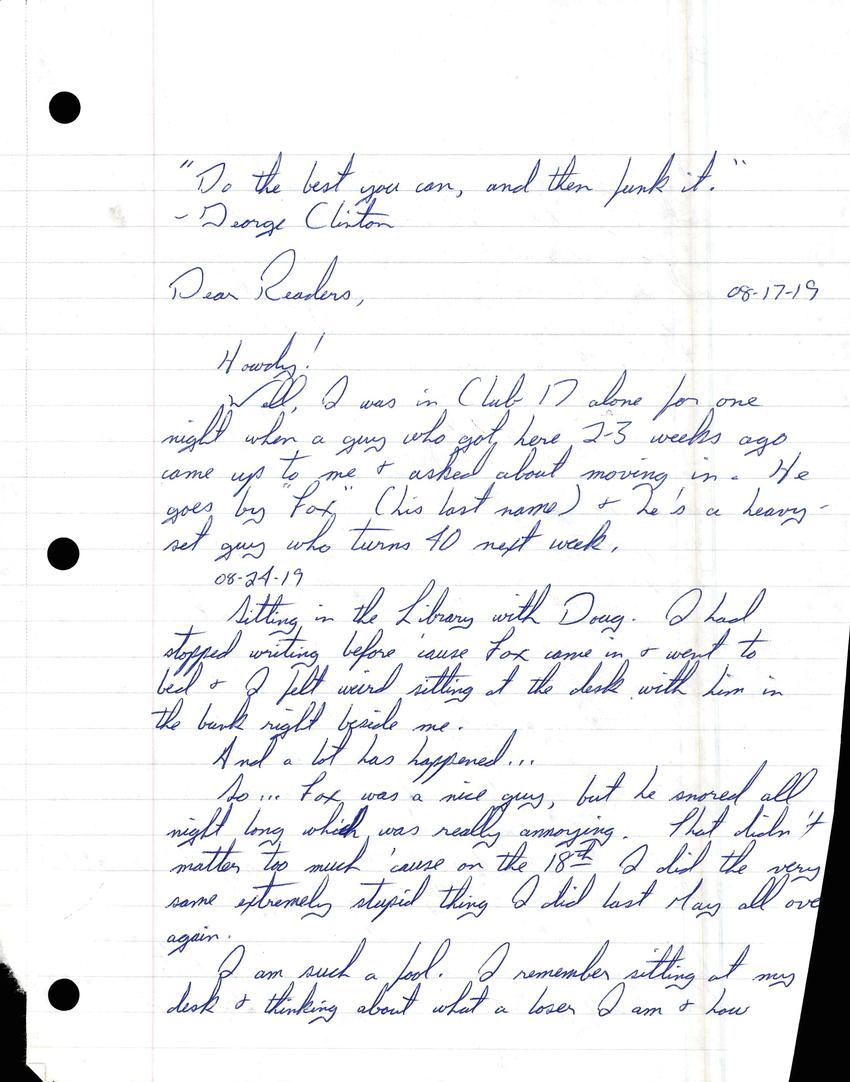 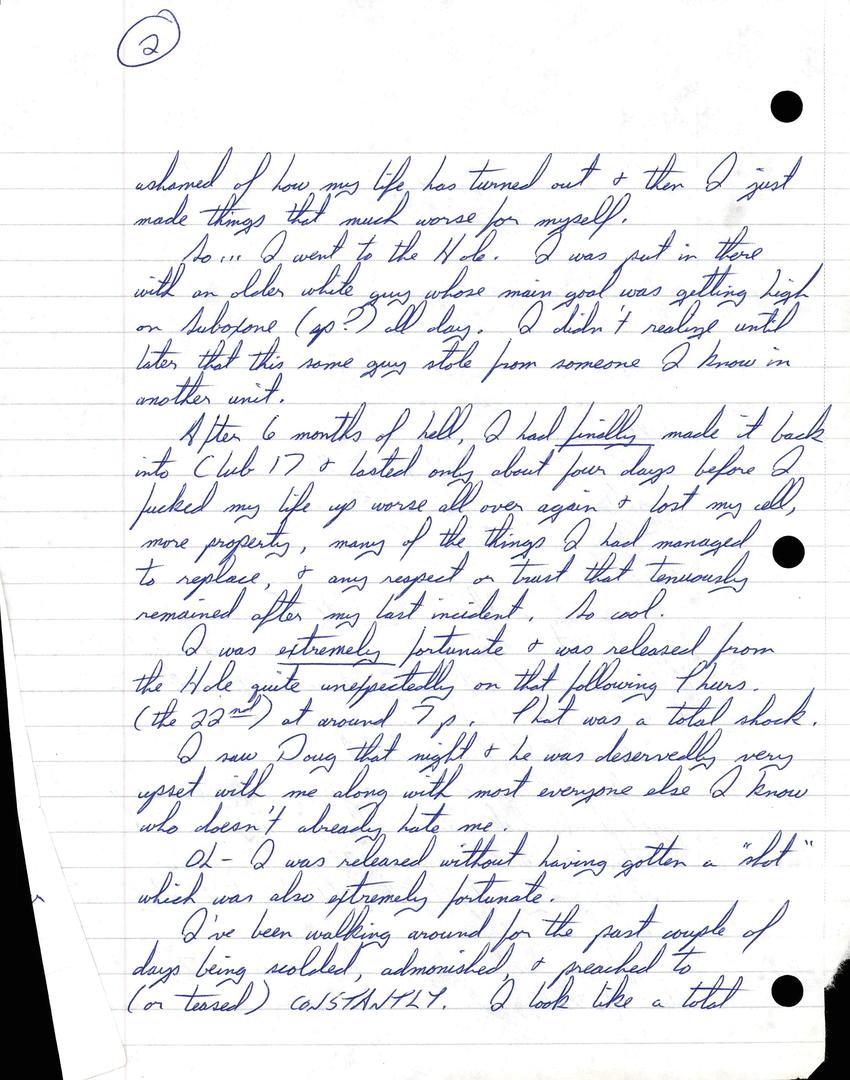 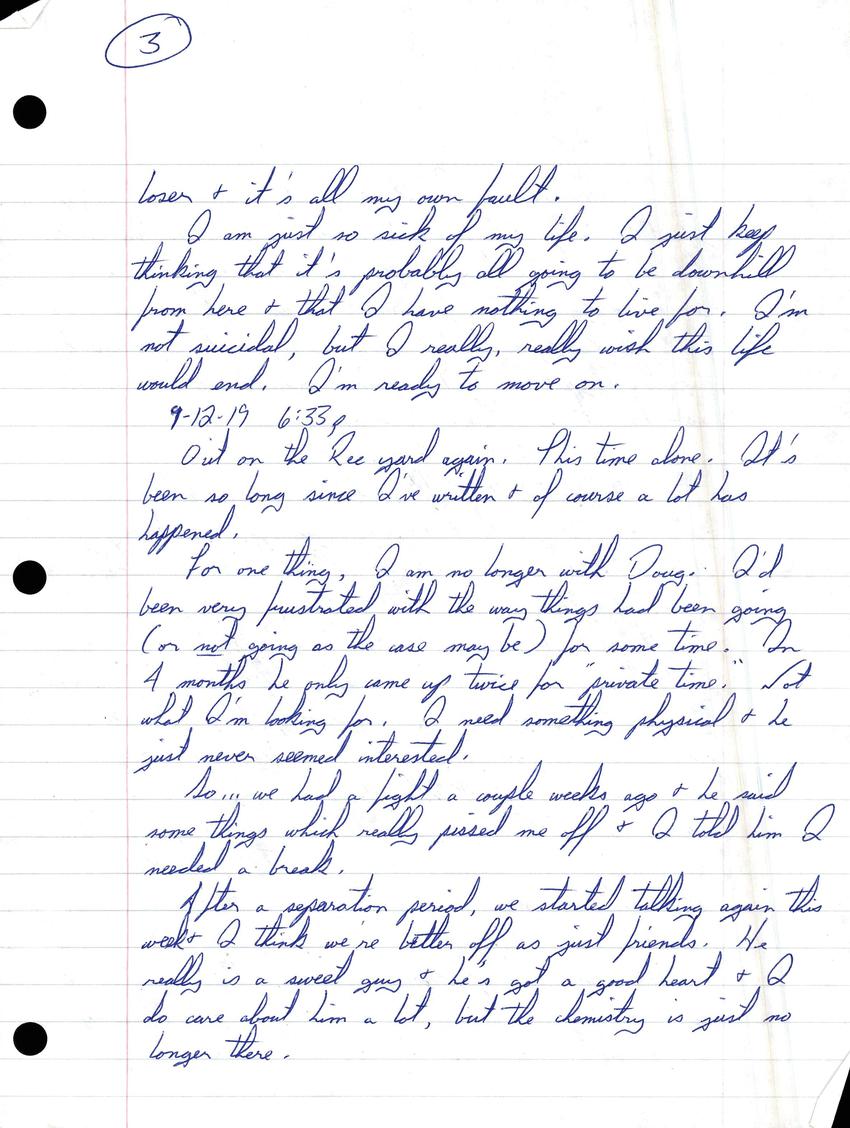 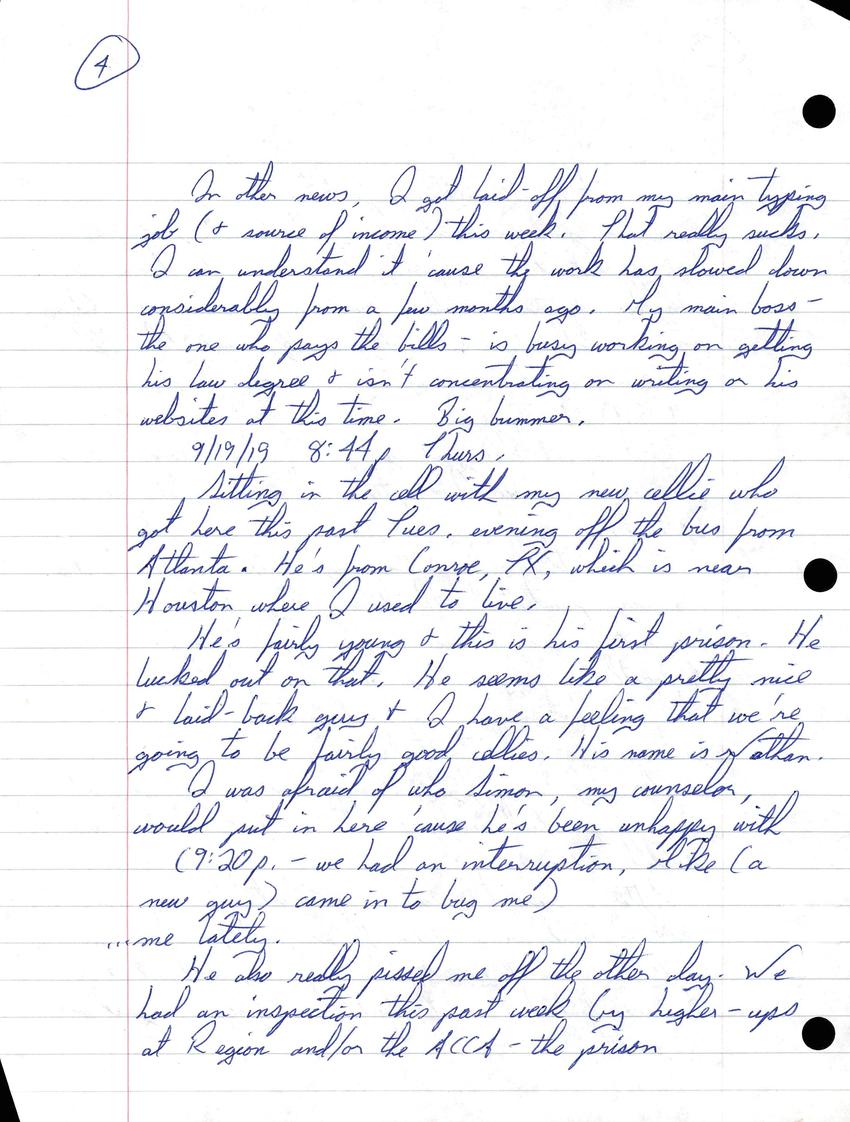 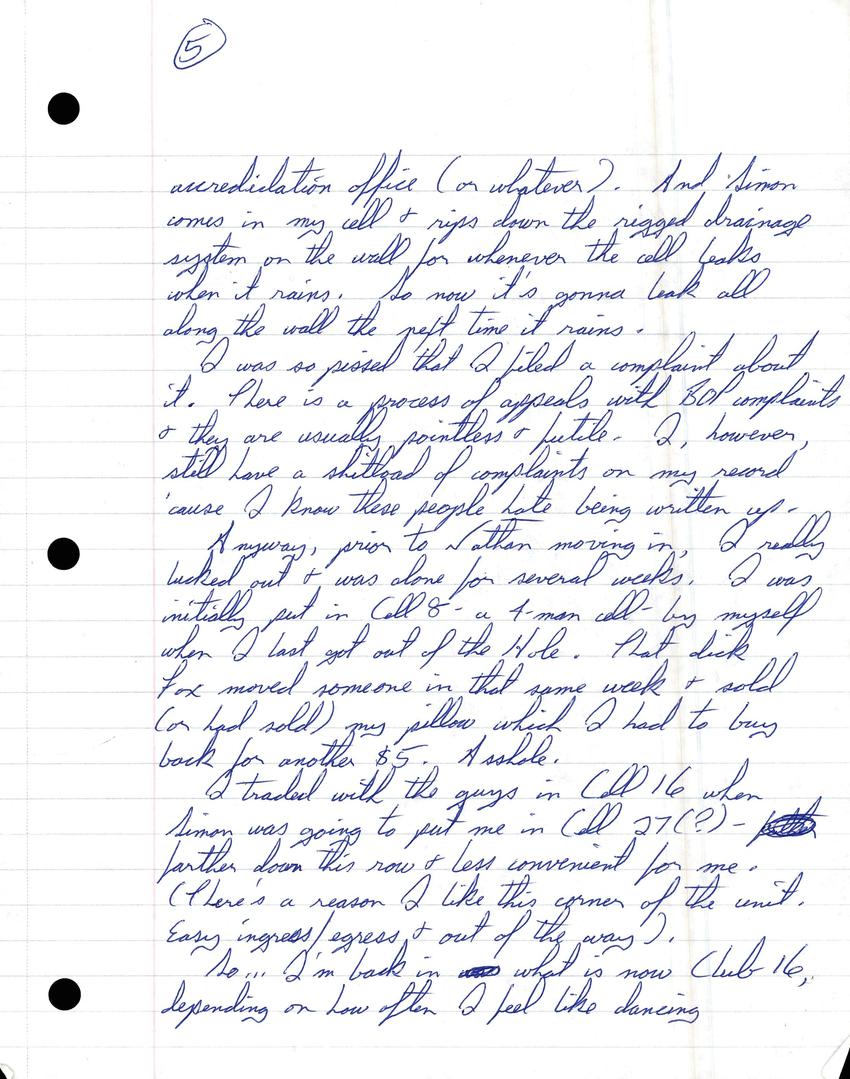 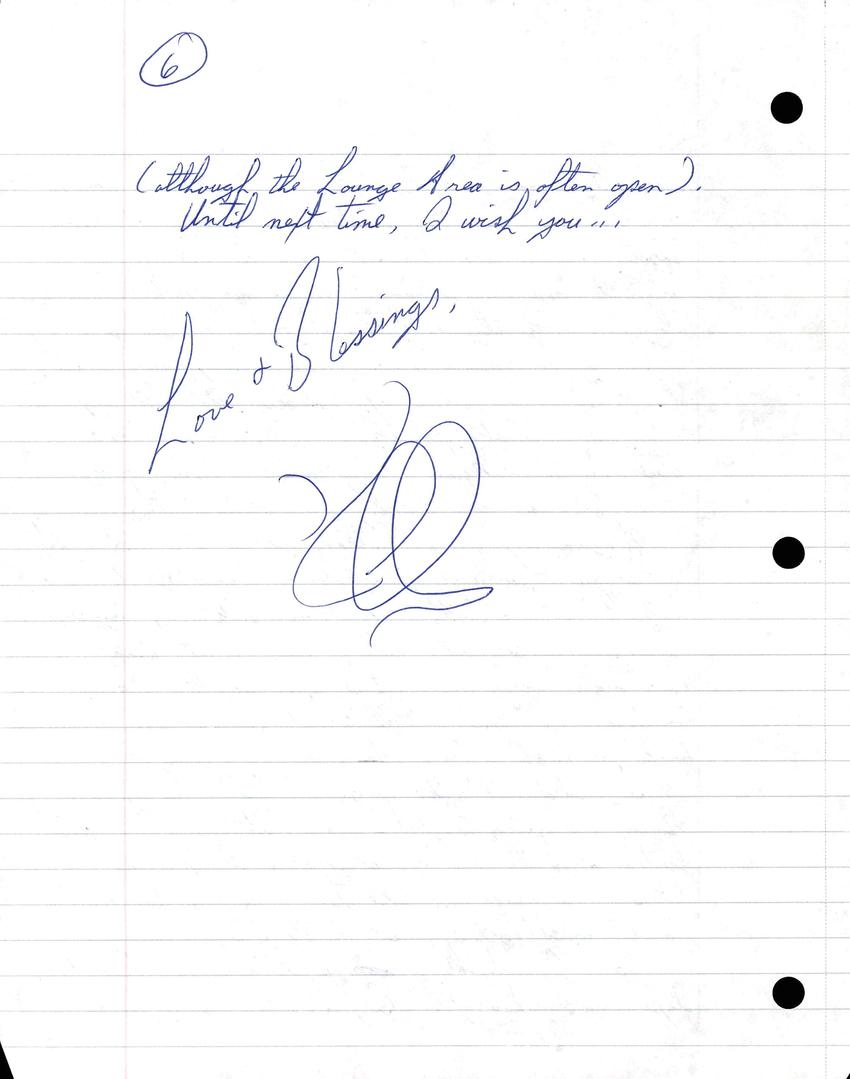 "Do the best you can, and then funk it."
—George Clinton

Well, I was in Club 17 alone for one night when a guy who got here two-three weeks ago come up to me and asked about moving in. He goes by Fox (his last name) and he's a heavy-set guy who turns 40 next week.

Sitting in the library with Doug. I had stopped writing before 'cause Fox came in and went to bed, and I felt weird sitting at the desk with him in the bunk right beside me. And a lot has happened.

So... Fox was a nice guy,but he snored all night long which was really annoying. That didn't matter too much 'cause on the 18th, I did the very same extremely stupid thing I did last May all over again. I am such a fool. I remember sitting at my desk and thinking about what a loser I am and how ashamed of how my life has turned out. Then I just made things that much worse for myself.

So... I went to the hole. I was put in there with an older white guy whose main goal was getting high on Suboxone (sp?) all day. I didn't realize until later that this same guy stole fro someone I know in another unit.

After six months of hell, I had finally made it back into Club 17 and lasted only about four days before I fucked my life up worse all over again and lost my cell, more property, many of the things I had managed to replace, and any respect or trust that tentatively remained after my last incident. So, cool.

I was extremely fortunate and was released from the hole quite unexpectedly on that following Thursday (the 22nd) at around 7 PM. That was a total shock. I saw Doug that night, and he was deservedly very upset with me along with most everyone else I know who doesn't already hate me.

Oh—I was released without having gotten a shot, which was also extremely fortunate.

I've been walking around for the past couple of days being scolded, admonished, and preached to (or teased) CONSTANTLY. I look like a total loser, and it's all my own fault.

I am just so sick of my life. I just keep thinking that it's probably all going to be downhill from here, and that I have nothing to live for. I'm not suicidal, but I really, really wish this life would end. I'm ready to move on.

Out on the rec yard again. This time alone. It's been so long since I've written and, of course, a lot has happened.

For one thing, I am no longer with Doug. I'd been very frustrated with the way things had been going (or not going as the case may be) for some time. In four months, he only came up twice for "private time." Not what I'm looking for. I need something physical and he just never seemed interested.

So... we had a fight a couple weeks ago, and he said some things which really pissed me off. I told him I needed a break.

After a separation period, we started talking again this week and I think we're better off as just friends. He really is a sweet guy, and he's got a good heart, and I do care about him a lot, but the chemistry is just no longer there.

In other news, I got laid off from my main typing job and source of income this week. That really sucks. I can understand 'cause the work has slowed down considerably from a few months ago. My main boss—the one who pays the bills—is busy working on getting his law degree and isn't concentrating on writing or his websites at this time. Big bummer.

Sitting in the cell with my new cellie who got here this past Tuesday evening off the bus from Atlanta. He's from Conroe, TX which is near Houston where I used to live.

He's fairly young and this is his first prison. He lucked out on that. He seems like a pretty nice and laid back guy. I have a feeling that we're going to be fairly good cellies. His name is Nathan.

I was afraid of who Simon, my counselor, would put in here 'cause he's been unhappy with—9:20 PM - we had an interruption. Mike, a new guy, came in to bug me—me lately. He's also really pissed me off the other day. We had an inspection this past week. My higher ups at Region and/or the ACCA—the prison accreditation office (or whatever). And Simon comes in my cell and rips down the rigged drainage system on the wall for whenever the cell leaks when it rains. So, now it's gonna leak all along the wall the next time it rains.

I was so pissed that I filed a complaint about it. There is a process of appeals with BOP complaints, and they are usually pointless and futile. However, I still have a shitload of complaints on my record 'cause I know these people hate being written up.

Anyway, prior to Nathan moving in, I really lucked out and was alone for several weeks. I was initially put in Cell 8 a four-man cell by myself when I last got out of the hole. That dick Fox moved someone in that same week and sold (or had sold) my pillows, which I had to buy back for another $5. Asshole.

I traded with the guys in Cell 16 when Simon was going to put me in Cell 27(?), further down this row and less convenient for me. There's a reason I like this corner of the unit. Easy ingress/egress and out of the way.

So... I'm back in what is now Club 16, depending on how often I feel like dancing—although the lounge area is often open.