Misinformation About Prison & The Harms It Causes 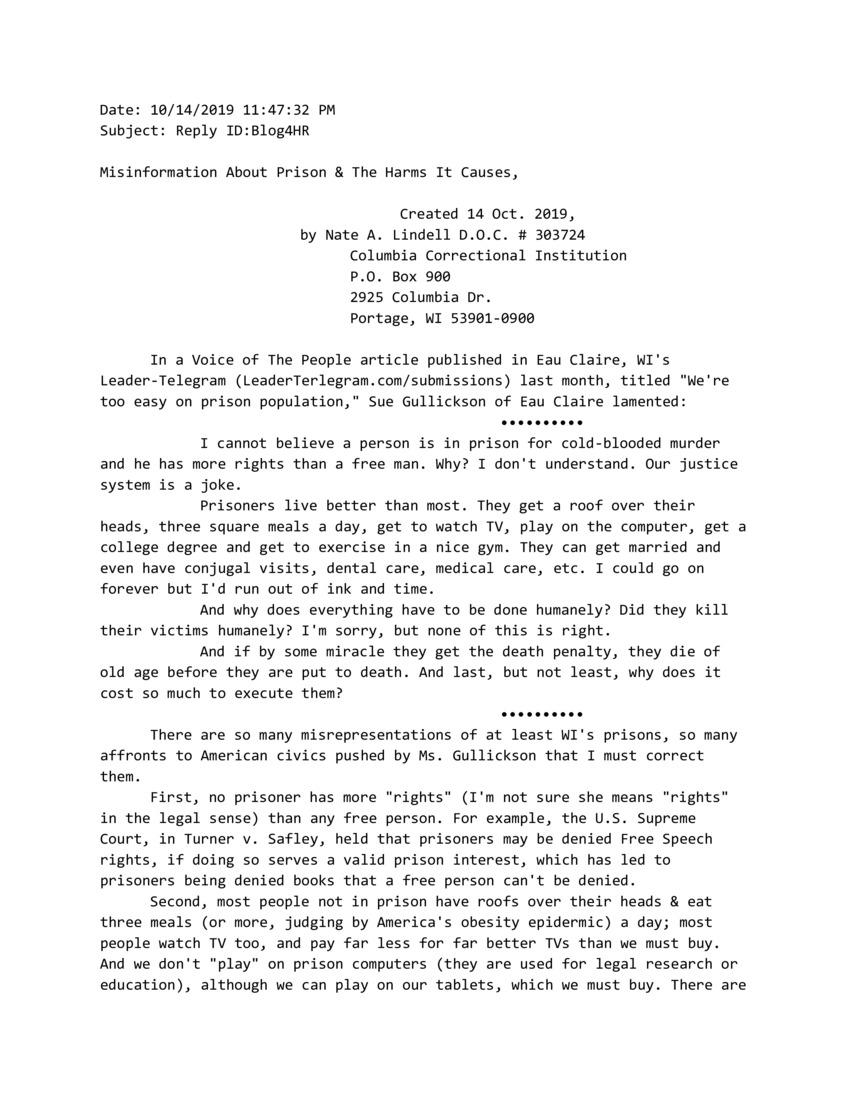 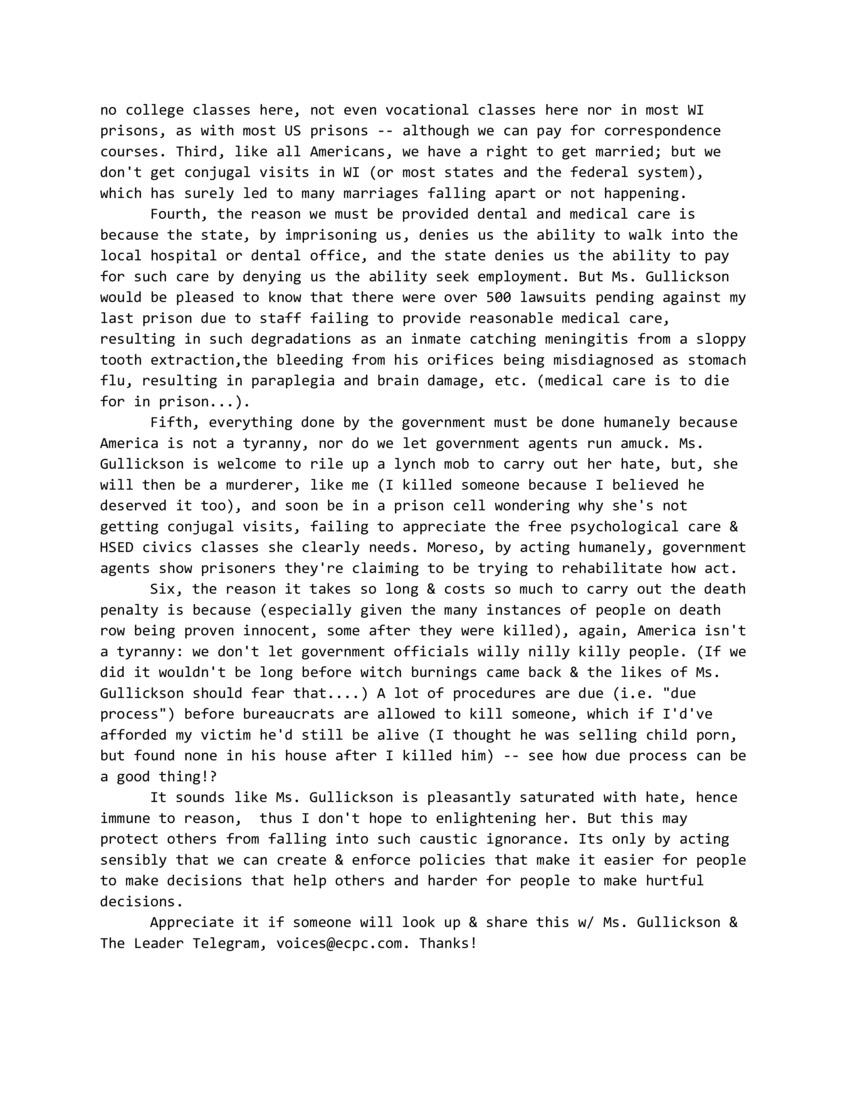 Date: 10/14/2019 11:47:32 PM Subject: Reply ID:Blog4HR
Misinformation About Prison & The Harms It Causes,
Created 14 Oct. 2019, by Nate A. Lindell D.O.C. # 303724
Columbia Correctional Institution P.O. Box 900 2925 Columbia Dr. Portage, WI 53901 - 0900
In a Voice of The People article published in Eau Claire, WI'S Leader-Telegram (LeaderTerlegram.com/submissions) last month, titled "We're too easy on prison population," Sue Gullickson of Eau Claire lamented:
I cannot believe a person is in prison for cold blooded murder and he has more rights than a free man. Why? I don't understand. Our justice system is a joke.
Prisoners live better than most. They get a roof over their heads, three square meals a day, get to watch TV, play on the computer, get a college degree and get to exercise in a nice gym. They can get married and even have conjugal visits, dental care, medical care, etc. I could go on forever but I'd run out of ink and time.
And why does everything have to be done humanely? Did they kill their victims humanely? I'm sorry, but none of this is right.
And if by some miracle they get the death penalty, they die of old age before they are put to death. And last, but not least, why does it cost so much to execute them?
There are so many misrepresentations of at least WI's prisons, so many affronts to American civics pushed by Ms. Gullickson that I must correct them.
First, no prisoner has more "rights" (I'm not sure she means "rights" in the legal sense) than any free person. For example, the U.S. Supreme Court, in Turner v. Safley, held that prisoners may be denied Free Speech rights, if doing so serves a valid prison interest, which has led to prisoners being denied books that a free person can't be denied.
Second, most people not in prison have roofs over their heads & eat three meals (or more, judging by America's obesity epidermic) a day; most people watch TV too, and pay far less for far better TVs than we must buy. And we don't "play" on prison computers (they are used for legal research or education), although we can play on our tablets, which we must buy. There are no college classes here, not even vocational classes here nor in most WI prisons, as with most US prisons -- although we can pay for correspondence courses. Third, like all Americans, we have a right to get married; but we don't get conjugal visits in WI (or most states and the federal system), which has surely led to many marriages falling apart or not happening.
Fourth, the reason we must be provided dental and medical care is because the state, by imprisoning us, denies us the ability to walk into the local hospital or dental office, and the state denies us the ability to pay for such care by denying us the ability seek employment. But Ms. Gullickson would be pleased to know that there were over 500 lawsuits pending against my
last prison due to staff failing to provide reasonable medical care, resulting in such degradations as an inmate catching meningitis from a sloppy tooth extraction, the bleeding from his orifices being misdiagnosed as stomach flu, resulting in paraplegia and brain damage, etc. (medical care is to die for in prison...).
Fifth, everything done by the government must be done humanely because America is not a tyranny, nor do we let government agents run amuck. Ms. Gullickson is welcome to rile up a lynch mob to carry out her hate, but, she will then be a murderer, like me (I killed someone because I believed he deserved it too), and soon be in a prison cell wondering why she's not getting conjugal visits, failing to appreciate the free psychological care & HSED civics classes she clearly needs. Moreso, by acting humanely, government agents show prisoners they're claiming to be trying to rehabilitate how act.
Six, the reason it takes so long & costs so much to carry out the death penalty is because (especially given the many instances of people on death row being proven innocent, some after they were killed), again, America isn't a tyranny: we don't let government officials willy nilly killy people. (If we did it wouldn't be long before witch burnings came back & the likes of Ms. Gullickson should fear that....) A lot of procedures are due (i.e. "due process") before bureaucrats are allowed to kill someone, which if I'd afforded my victim he'd still be alive (I thought he was selling child porn, but found none in his house after I killed him) -- see how due process can be a good thing!?
It sounds like Ms. Gullickson is pleasantly saturated with hate, hence immune to reason, thus I don't hope to enlightening her. But this may protect others from falling into such caustic ignorance. Its only by acting sensibly that we can create & enforce policies that make it easier for people to make decisions that help others and harder for people to make hurtful decisions.
Appreciate it if someone will look up & share this w/ Ms. Gullickson & The Leader Telegram, voices@ecpc.com. Thanks!