Your Past Doesn't Have To Be Your Future 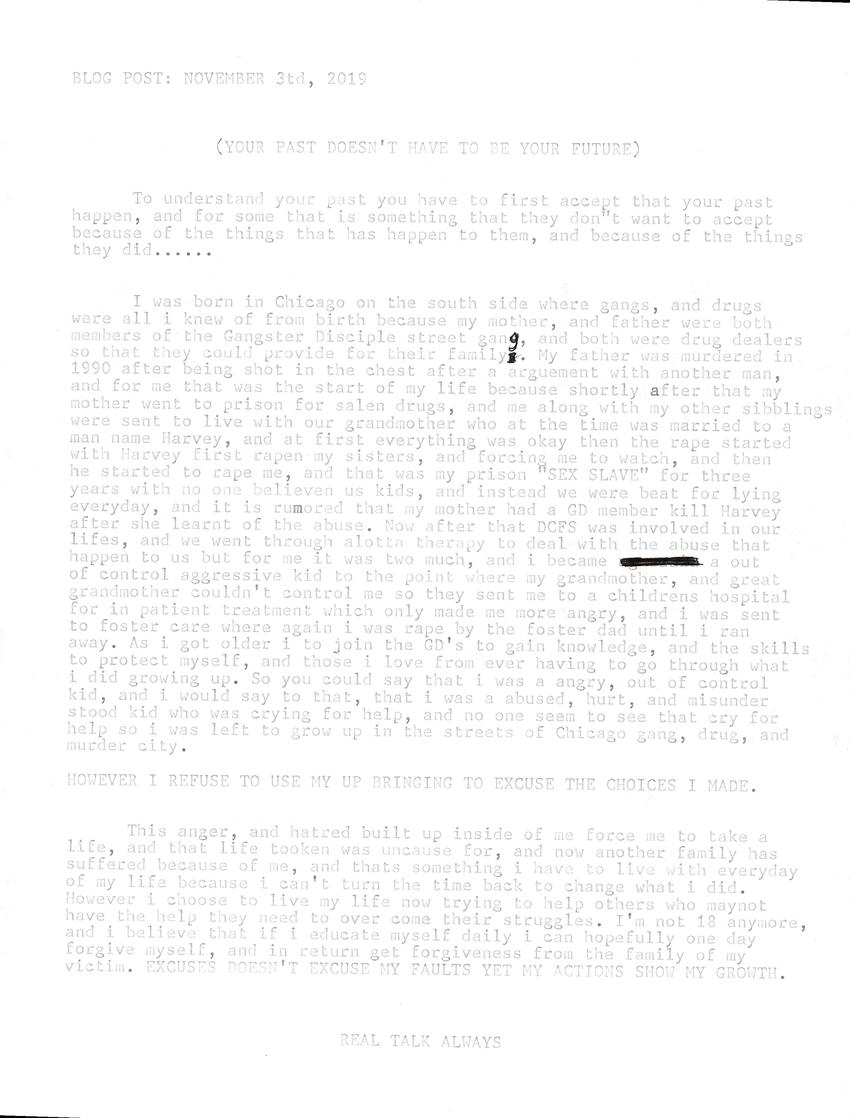 YOUR PAST DOESN'T HAVE TO BE YOUR FUTURE

I was born in Chicago on the south side where gangs and drugs were all I knew of from birth because my mother and father were both members of the Gangster Discipline street gang. Both were drug dealers so that they could provide for their family. My father was murdered in 1990 after being shot in the chest after an argument with another man and, for me, that was the start of my life because, shortly after that, my mother went to prison for selling drugs.

Me and my other siblings were sent to live with our grandmother who at the time was married to a man named Harvey. At first everything was okay. Then the rape started with Harvey first raping my sisters and forcing me to watch. Then he started to rape me. That was my prison, sex slave for three years with no one believing us kids. We were beaten for "lying" every day, and it is rumored that my mother had a GD member kill Harvey after she learned about the abuse.

Now after that, DCFS was involved in our lives. We went through a lotta therapy to deal with the abuse that happened to us. For me, it was too much, and I became a control aggressive kid to the point where my grandmother and great-grandmother couldn't control me. So, they sent me to a children's hospital for in patient treatment, which only made me more angry. I was sent away again.

As I got older, I joined the GD's to gain knowledge and the skills to protect myself and those I love from ever having to go through what I did growing up.

So, you could say that I was an angry, out of control kid. I would say I was an abused, hurt, and misunderstood kid who was crying for help. No one seemed to see that cry for help, so I was left to grow up in Chicago's street gangs, drugs, and murder city.

HOWEVER I REFUSE TO USE MY UPBRINGING TO EXCUSE THE CHOICES I MADE.

This anger and hatred built up inside of me forced me to take a life, and that taken life was uncalled for. Now, another family has suffered because of me. That's something I have to live with every day of my life. Because I can't turn the time back to change what I did.

However, I chose to live my life now, trying to help others who may not have the help they need to overcome their struggles. I'm not 18 anymore, and I believe that if I educate myself daily, I can hopefully one day forgive myself. In return, maybe the victim's family can forgive me too.

EXCUSES DOESN'T EXCUSE MY FAULTS YET MY ACTIONS SHOW MY GROWTH.