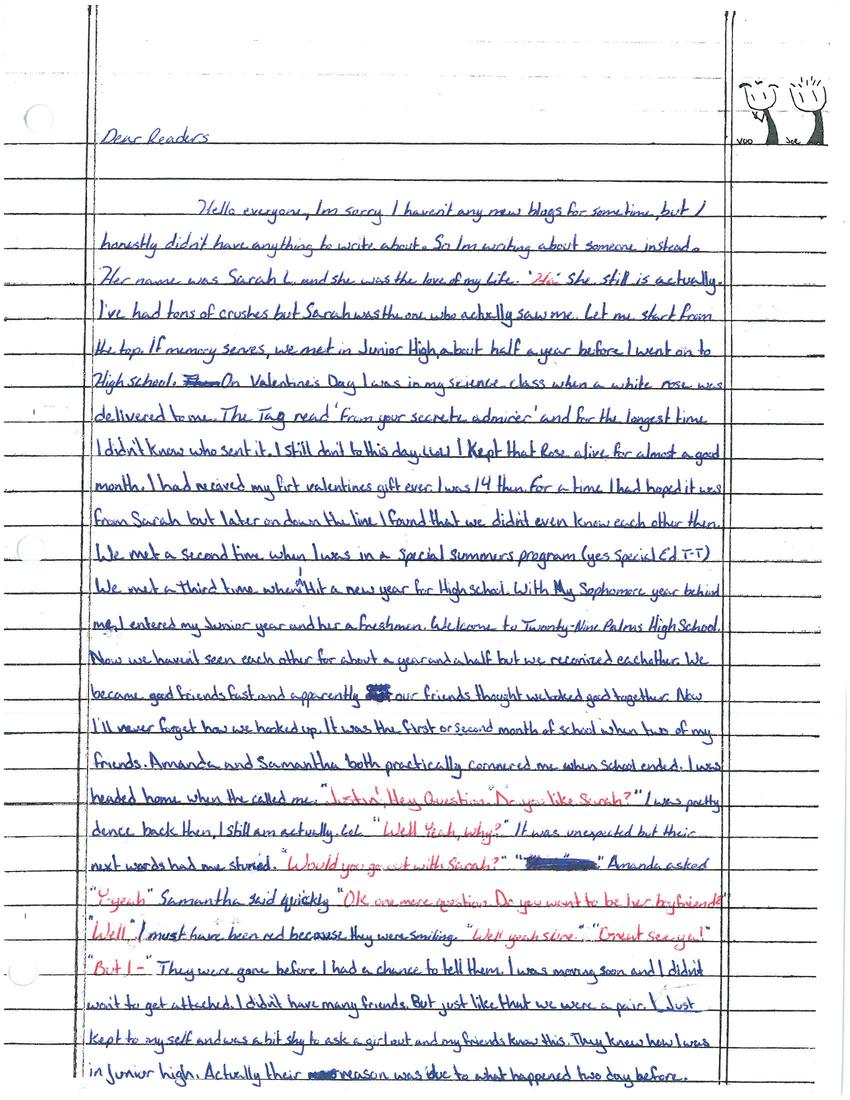 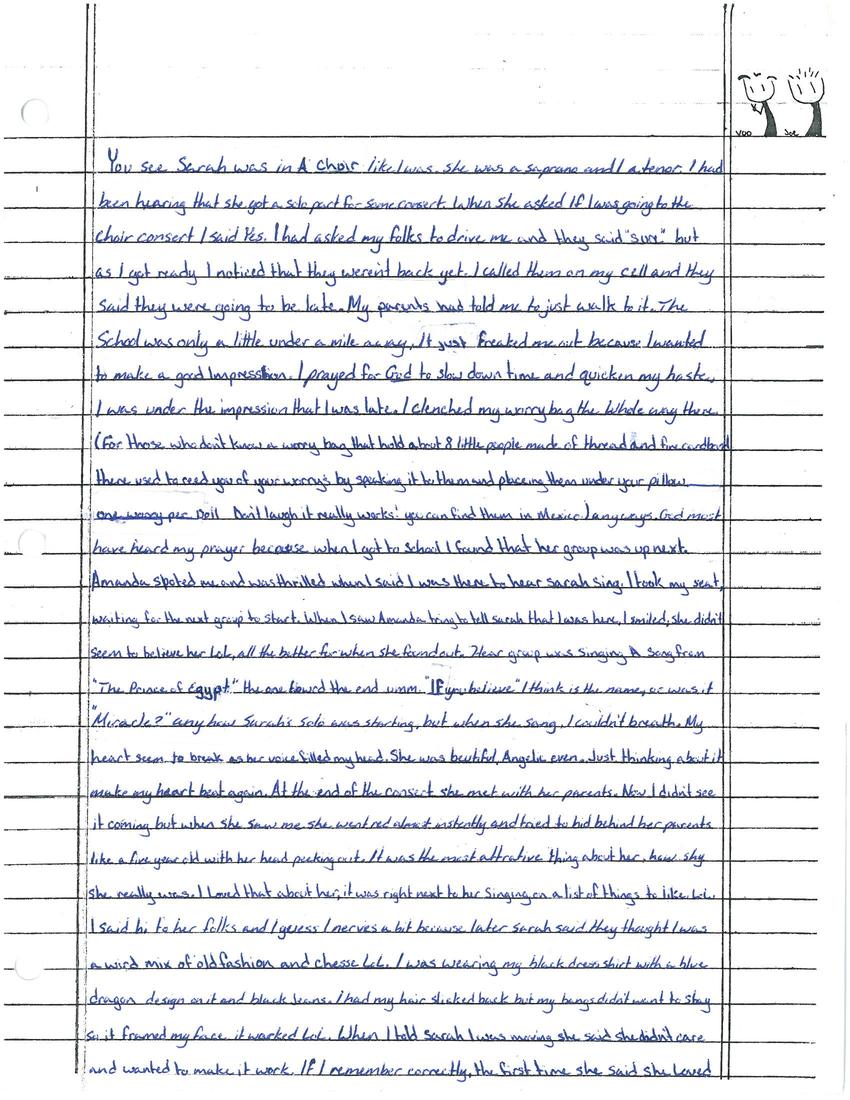 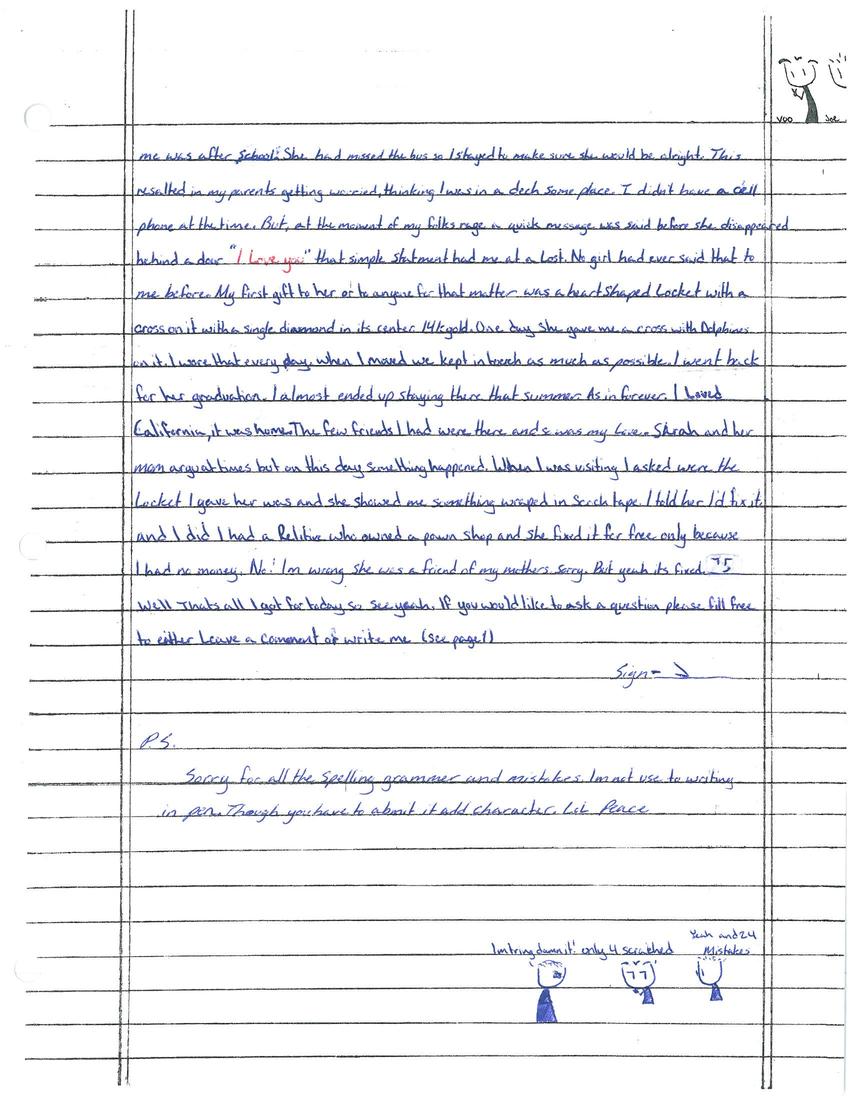 Hello everyone, I'm sorry I haven't any new blogs for sometime , but I honestly didn't have anything to write about. So I'm writing about someone instead.

Her name was Sarah L and she was the love of my life. 'Ha' She still is actually. I've had tons of crushes but Sarah was the one who actually saw me. Let me start from the top. If memory serves, we met in Junior High, about half a year before I went on to High School. On Valentine's Day I was in my science class when a white rose was delivered to me. The Tag read' from your secret admirer' and for the longest time I didn't know who sent it. I still don't to this day. How I kept that Rose alive for almost a good month. I had received my first valentines gift ever. I was 14 then for a time and I had hoped it was from Sarah but later on down the line I found that we didn't even know each other then.

We met a second tike when I was in a special summers program (yes Special Ed T.T). We met a third time where I hit a new year for High School. With my Sephomere year behind me, I entered my Junior year and her a freshman. Welcome to Twenty-Nine- Palms High School. Now we haven't seen each other for about a year and a half but we recognised each other. We became good friends first and apparently our friends thought we looked good together. Now i'll never forget how we hooked up. It was the first or second month of school when two of my friends. Amanda and Samantha both practically cornered me when school ended. I was headed home when the called me. "Justin! Hey Question. Do you like Sarah? I was pretty dence back then. I still am actually. Lol "well yeah, why?" It was unexpected but their next words had me stuned. "Would you go out with Sarah?" "Amanda asked "Y yeah" Samantha said quickly" "Ok one more question. Do you want to be her boyfriend" "Well" I must have been red because they were smiling. Well yeah sure" "Great see ya!" "But I -" They were gone before I had a chance to tell them. I was moving soon and I didn't want to get attached. I didn't have many friends. but just like that we were a pair. I just kept to myself and was a bit shy to ask a girl out and my friends know this. They knew how I was in Junior High. Actually their reason was due to what happened to days before.

You see Sarah was in a choir like I was. She was a saprano and I a tenor. I had been hearing that she got a solo part for some concert. When she asked if I was going to the choir concert I said yes. I had asked my folks to drive me and they said "SUN" but as I got ready I noticed tha tthey weren't back yet. I called them on my cell and they said they were going to be late. My parents had told me to just walk to it. The School was only a little under a mile away. It just freaked me out because I wanted to make a good impression. I prayed for God to slow down time and quicken my haste. I was under the impression that I was late. I clenched my worry bag the whole way there.

(For those who don't know worry bag that held about 8 people made of thread and fine cardboard they used to rid you of your worries by speaking it them and placing them under your pillow and worry per day. Don't laugh it really works! you can find them in Mexico languages. God must have heard any prayer because when I get to school I found that her group was up next.

Amanda spotted me and was thrilled when I said I was there to hear Sarah sing. I took my seat, waiting for the next group to start. When I saw Amanda trying to tell Sarah that I was here, I smiled, she didn't seem to believe her lol, all the better for when she found out. Her group was singing a song from "The Prince of Egypt" the one toward the end umm. "If you believe "I think is the name, or was it "Miracle?" any how suratis solo was starting, but the song, I couldn't breath. My heart seem to break as her voice filled my head. She was beautiful, Angelic even. Just thinking about it make my heart beat again.

At the end of the concert she met with her parents. Now I didn't see it coming but when she saw me she went red about it instantly and tried to hide behind her parents like a five year old with her head peeking out. It was the most attractive thing about her, how shy she really was. I loved than about her, it was right next to her singing on a list of things to like lol. I said hi to her folks and I guess I nerves a bit because later Sarah said they thought I was a weird mix of old fashion and chesse lol. I was wearing my black dress shirt with a blue dragon design on it and black jeans. I had my hair slicked back but my bangs didn't want to stay so it frowned my face it worked lol. When I told Sarah I was moving she said she didn't care and wanted to make it work. If I remember correctly, the first time she said she loved me was after school. She had missed the bus so I stayed to make sure she would be alright. This resulted in my parents getting worried thinking I was in a ditch some place. I didn't have a cell phone at the time, bu, at the moment of my folks rage a quick message was said before she disappeared behind a door" "I love you" that simple statement had me at a lost. No girl had ever said that to me before. My first gift to her or to anyone for that matter was a heart shaped locket with a cross on it with a single diamond in its center 141 gold. One day she gave me a cross with Dolphnis on it. I wear that every day. when I moved we kept in touch as much as possible. I went back for her graduation. I almost ended up staying there that summer as in forever. I loved California, it was home. The few friends I had were there and so wasmy love. Sarah and her Mom argue at times but on this day something happened. When I was writing I asked where the locket I gaveher was and she showed me something wrapoped in scotch tape. I told her I'd fix it and I did I had a relative who owned a pawn shop and she fixed it for free only because I had no money. No! I'm wrong she was a friend of my mothers sorry. but yeah it's fixed.

Well that's all I got for today so see yeah. If you would like to ask a question plese feel free to either leave a comment or write me (see page 1)

P.S. Sorry for all the spelling grammer and mistakes. I'm not used to writing in pen. Though you have to about it add character. Lol Peace