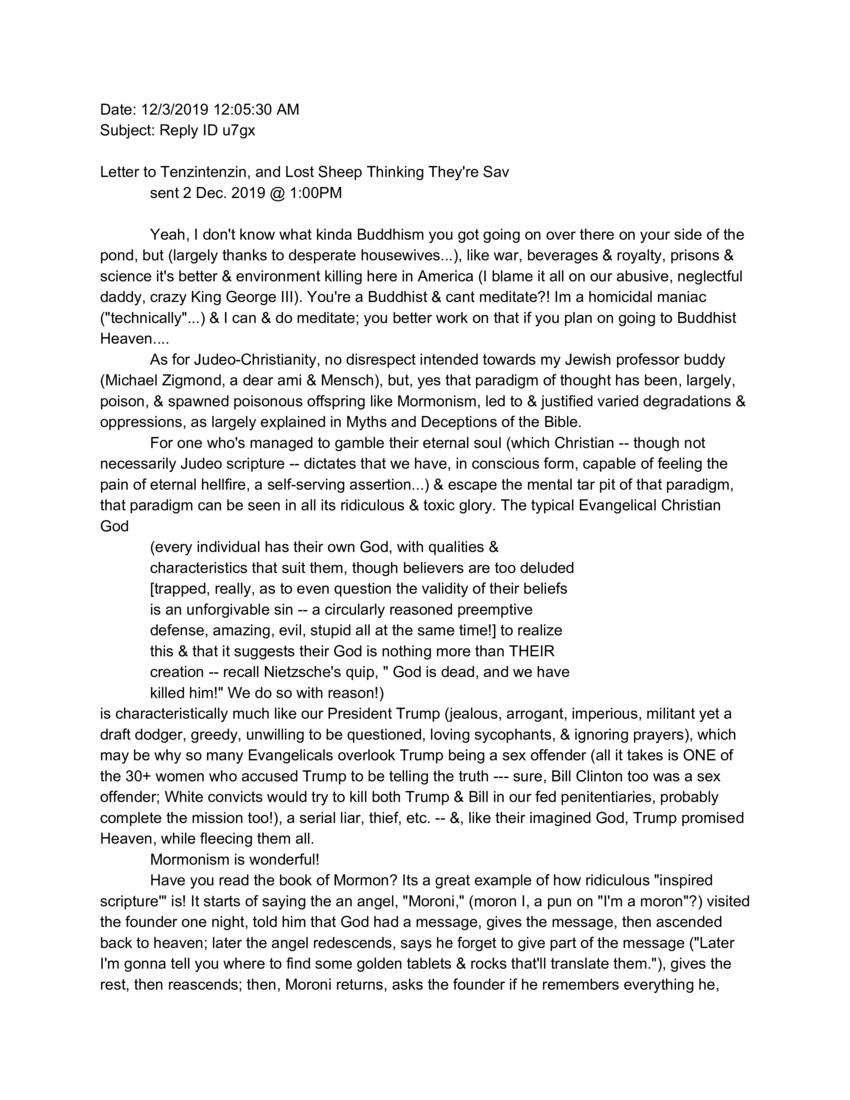 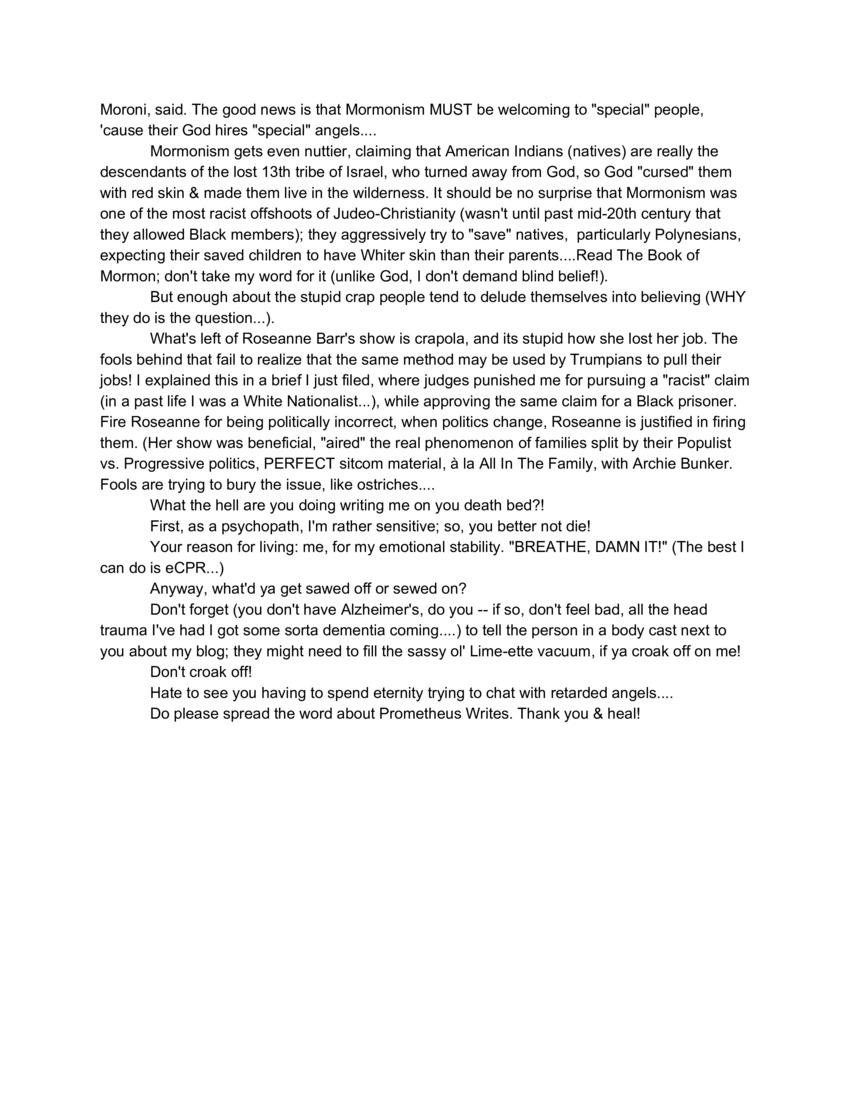 Yeah, I don't know what kinda Buddhism you got going on over there on your side of the pond, but (largely thanks to desperate housewives...), like war, beverages & royalty, prisons & science it;s better & environment killing here in America (I blame it all on our abusive, neglectful daddy, crazy King George III). You're a Buddhist & can't meditate?! I'm a homicidal maniac ("technically"...) & I can & do meditate; you better work on that if you plan on going to Buddhist Heaven...
As for Judeo-Christianity, no disrespect intended towards my Jewish professor buddy (Michael Zigmond, a dear ami & Mensch), but yes that paradigm of thought has been, largely, poison, & spawned poisonous offspring like Mormonism, led to & justified varied degradations & oppressions, as largely explained in Myths and Deceptions of the Bible.
For one who's managed to gamble their eternal soul (which Christian -- though not necessarily Judeo scripture -- dictates that we have, in conscious form, capable of feeling the pain of eternal hellfire, a self-serving assertion...) & escape the mental tar pit of that paradigm, that paradigm can be seen in all its ridiculous & toxic glory. The typical Evangelical Christian God
(every individual has their own God, with qualities & characteristics that suit them, though believers are too deluded [trapped, really, as to even question the validity of their beliefs is an unforgivable sin -- a circularly reasoned preemptive defense, amazing, evil, stupid all at the same time!] to realize this & that it suggests their God is nothing more than THEIR creation -- recall Nietzsche's quip, "God is dead, and we have killed him!" We do so with reason!)
is characteristically much like our president Trump (jealous, arrogant, imperious, militant yet a draft dodger, greedy, unwilling to be questioned, loving sycophants, & ignoring prayers), which may be why so many Evangelicals overlook Trump being a sex offender (all it takes is ONE of the 30+ women who accused Trump to be telling the truth -- sure, Bill Clinton too was a sex offender; White convicts would try to kill both Trump & Bill in our fed penitentiaries, probably complete the mission too!), a serial liar, thief, etc. -- &, like their imagined God, Trump promised Heaven, while fleecing them all.
Mormonism is wonderful!
Have you ever read the book of Mormon? Its a great example of how ridiculous "inspired scripture" is! It starts off saying the an angel, "Moroni," (moron I, a pun on "i'm a moron"?) visited the founder one night, told him that God had a message, gives the message, then ascended back to heaven; later the angel reascends, says he forgot to give part of the message ("Later I'm gonna tell you where to find some golden tablets & rocks that'll translate them."), gives the rest, then reascends; then, Moroni returns, asks the founder if he remembers everything he, Moroni, said. The good news is that Mormonism MUST be welcoming to "special" people, 'cause their God hires "special" angels...
Mormonism gets even nuttier, claiming that American Indians (natives) are really the descendants of the lost 13th tribe of Israel, who turned away from God, so God "cursed" them with red skin & made them live in the wilderness. I should be no surprise that Mormonism was on of the most racist offshoots of Judeo-Christianity (wasn't until past mid-20th century that they allowed Black members); they aggressively try to "save" natives, particularly Polynesians, expecting their saved children to have Whiter skin than their parents... read The Book of Mormon; don't take my word for it (unlike God, I don't demand blind belief!)
But enough about the stupid crap people tend to delude themselves into believing (WHY they do is the question..).
What's left of Roseanne Barr's show is crapola, and its stupid how she lost her job. The fools behind that fail to realize that the same method may be used by Trumpians to pull their jobs! I explained this in a brief I just filed, where judges punished me for pursuing a "racist" claim (in a past life I was a White Nationalist...), while approving the same claim for a Black prisoner. Fire Roseanne for being politically incorrect, when politics change, Roseanne is justified in firing them. (Her show was beneficial, "aired" the real phenomenon of families split by their Populist vs. Progressive politics, PERFECT sitcom material, a la All In The Family, with Archie Bunker. Fools are trying to bury the issue, like ostriches...
What the hell are you doing writing me on your death bed?!
First, as a psychopath, I'm rather sensitive; so you better not die!
Your reason for living: me, for my emotional stability. "BREATHE, DAMN IT!" (The best I can do is eCPR...)
Anyway, what'd ya get sawed off or sewed on?
Don't forget (you don't have Alzheimer's, do you -- if so, don't feel bad, all the head trauma I've had I got some sorta dementia coming...) to tell the person in a body cast next to you about my blog; they might need to fill the sassy ol' Lime-ette vacuum, if ya croak off on me!
Don't croak off!
Hate to see you having to spend eternity trying to chat with retarded angels...
Do please spread the word about Prometheus Writes. Thank you & heal!