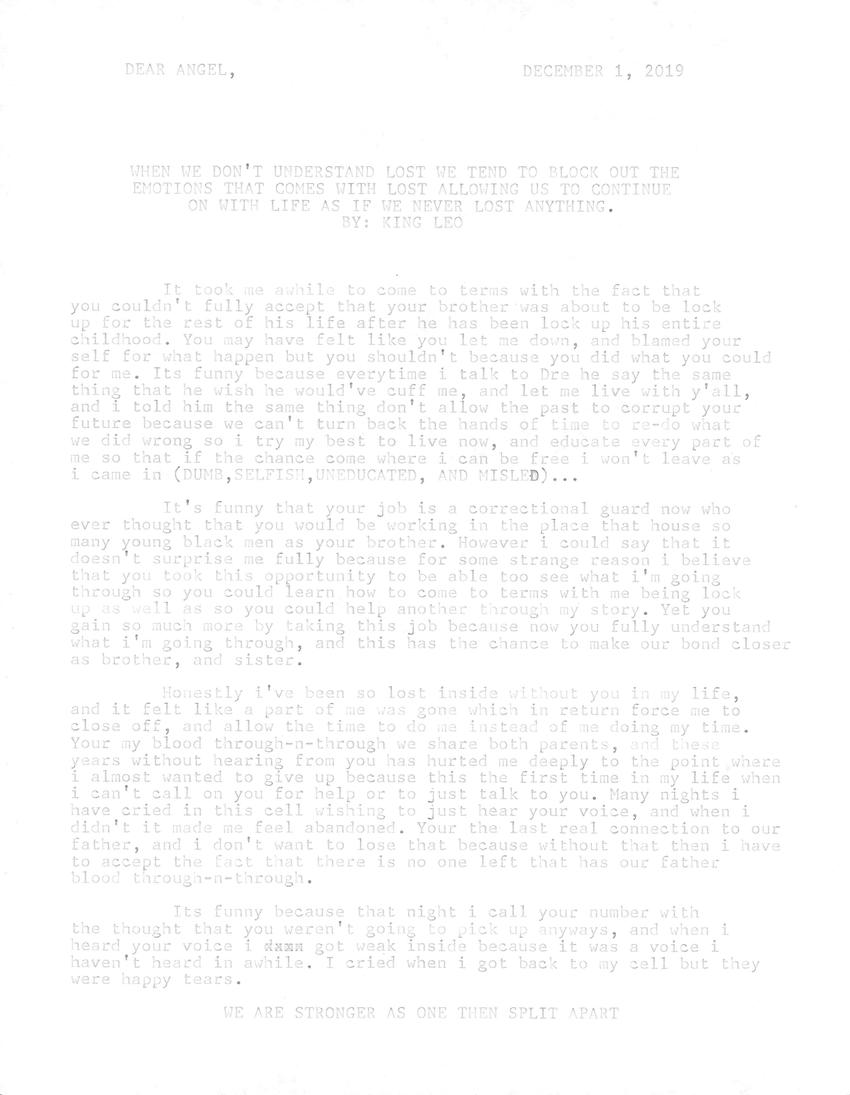 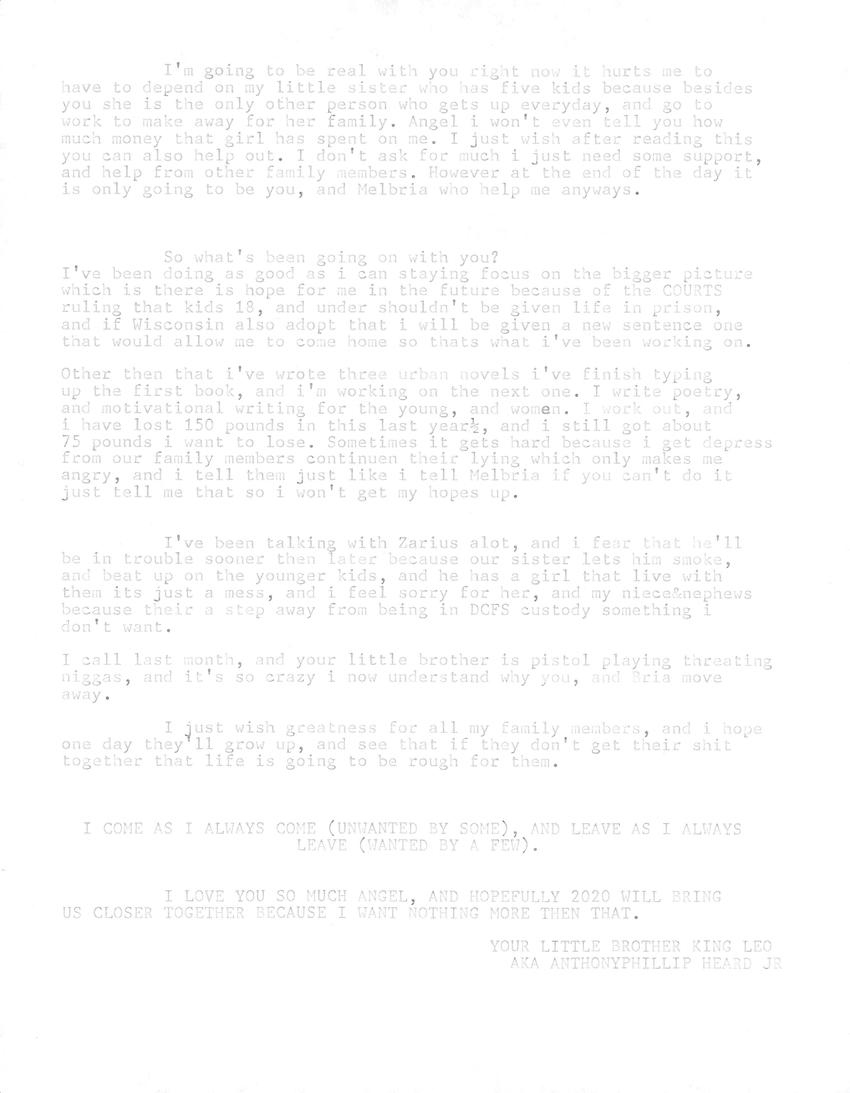 WHEN WE DON'T UNDERSTAND LOST WE TEND TO BLOCK OUT THE EMOTIONS THAT COMES WITH LOST, ALLOWING US TO CONTINUE ON WITH LIFE AS IF WE NEVER LOST ANYTHING.
By King Leo

Dear Angel,
It took me awhile to come to terms with the fact you couldn't fully accept your brother was about to be locked up for the rest of his life, after he had been locked up for his entire childhood. You may have felt you let me down, blamed yourself for what happened. But you shouldn't because you did what you could for me.

It's funny because every time I talk to Dre, he says the game thing that he wishes he would've cuffed me and let me live with y'all. I told him the same thing.

Don't allow the past to corrupt your future because we can't turn back the hands of time to redo what we did wrong. So, I try my best to live now and educate every part of me. If the chance comes where I can be free, I won't leave as I came in (DUMB, SELFISH, UNEDUCATED, MISLED)...

It's funny that your job is correctional guard now. Whoever thought that you would be working in the place that houses so many young black men like your brother. However, I could say that it doesn't fully surprise me because, for some strange reason, I believe you took this opportunity to be able to see what I'm going through. So you could learn how to come to terms with me being locked up and to help another through my story. Yet you gain so much more by taking this job because now you fully understand what I'm going through. This has the chance to make our bonds closer, as brother and sister.

Honestly I've been so lost inside without you in my life. Felt like a part of me was gone, which forces me to close off and allow the time to do me instead of me doing my time. You're my blood through and through. We share both parents. These years without hearing from you has hurt me deeply, to the point where I almost wanted to give up. Because this is the first time in my life when I can't call on you for help or just talk to you.

Many nights I have cried in this cell, wishing to just hear your voice. When I didn't, it made me feel abandoned. Your're the last real connection to our father, and I don't want to lose that. Without that, I have to accept the fact that there is no one left that has our father's blood through and through.

It's funny because that night I called your number with the thought you weren't going to pick up anyway, and I heard your voice, I damn got weak inside. Because it was a voice I haven't heard in awhile. I cried when I got back to my cell, but they were happy tears.

WE ARE STRONGER AS ONE THEN SPLIT APART

I'm going to be real with you right now. It hurts me to have to depend on my little sister who has five kids. Besides you, she is the only other person who gets up every day and goes to work to make away for her family. Angel, I won't even tell you how much money that girl has spent on me.

I just wish after reading this, you can also help out. I don't ask for much. I just need some support and help from other family members. However, at the end of the day, it is only going to be you and Melbria who help me anyway.

So, what's been going on with you?

I've been doing as good as I can, staying focused on the bigger picture. There is hope for me out there in the future because of the COURT'S ruling that kids 18 and under shouldn't be given life in prison. If Wisconsin also adopted that, I will be given a new sentence, one that would allow me to come home. So, that's what I've been working on.

Other than that, I've written three urban novels. I've finished typing up the first book and I'm working on the next one. I write poetry and motivational writing for the young and women. I work out and I have lost 150 pounds in this last year. I still got about 75 pounds I want to lose.

Sometimes it gets hard because I get depressed from our family members continue their lying. Makes me so angry. I tell them just like I tell Melbeia, if you can't do it just tell me so that I won't get my hopes up.

I've been talking with Zarlus a lot, and I fear that he'll be in trouble sooner than later. Our sister lets him smoke and beat up the younger kids, and he has a girl that lives with them. It's just a mess, and I feel sorry for her and my niece and nephews. They're a step away form being in DCFS custody, something I don't want.

I called last month, and your little brother is pistol playing. Threatening niggas. It's so crazy. I now understand why you and Bria moved away.

I just wish greatness for all my family, and I hope one day they'll grow up and see that if they don't get their shit together, their lives are going to be rough for them.

I LOVE YOU SO MUCH, ANGEL. HOPEFULLY 2020 WILL BRING US CLOSER TOGETHER BECAUSE I WANT NOTHING MORE THAN THAT.