Real Talk - The View of a Connecticut Prisoner Vol. 3 No. 6 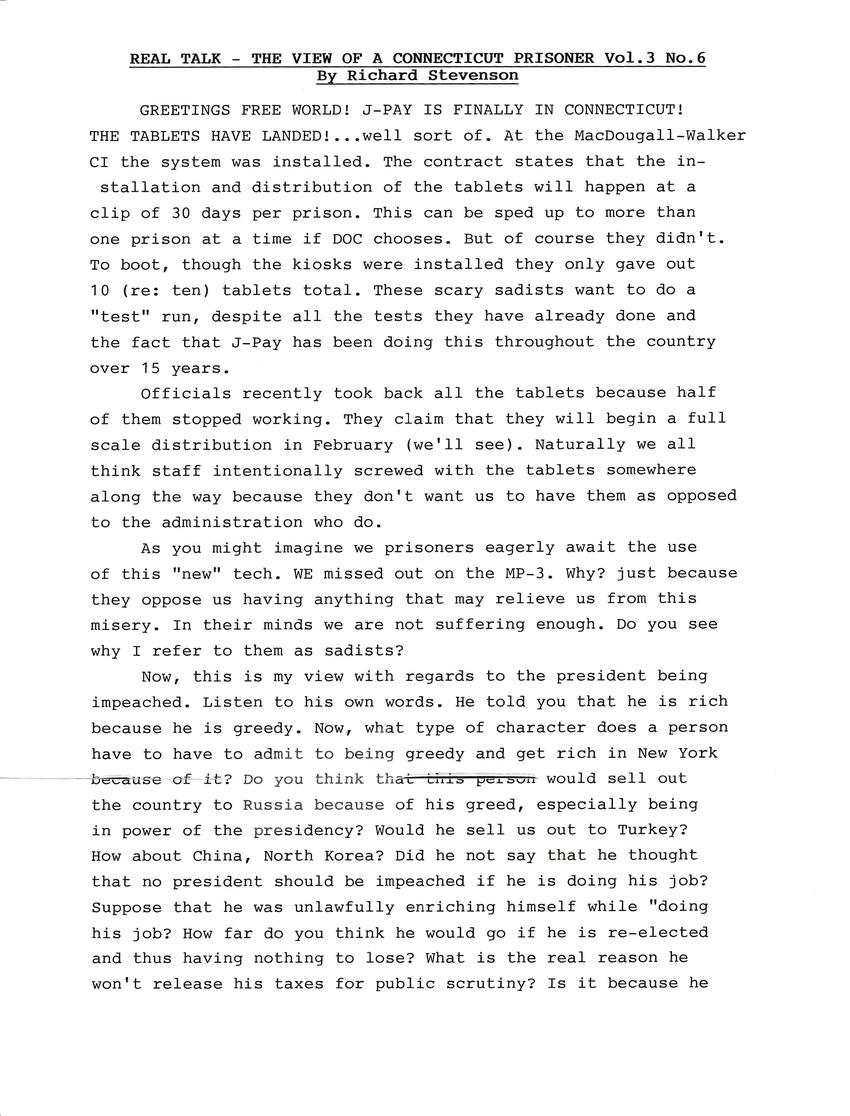 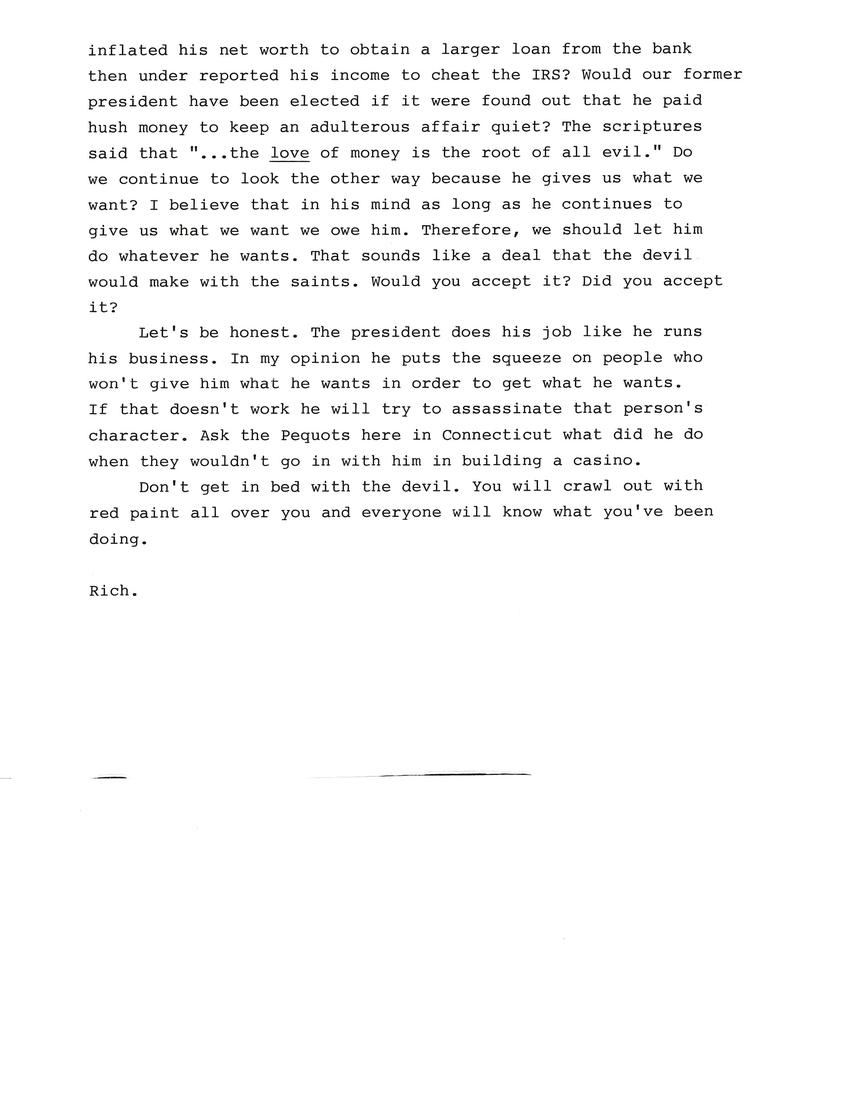 REAL TALK - THE VIEW OF A CONNECTICUT PRISONER Vol.3 No.6
By Richard Stevenson

GREETINGS FREE WORLD! J-PAY IS FINALLY IN CONNECTICUT! THE TABLETS HAVE LANDED!...well sort of. At the MacDougall-Walker CI the system was installed. The contract states that the installation and distribution of the tablets will happen at a clip of 30 days per prison. This can be sped up to more than one prison at a time if DOC chooses. But of course, they didn't. To boot, though the kiosks were installed they only gave out 10 (re: ten) tablets total. These scary sadists want to do a "test" run, despite all the tests they have already done and the fact that J-Pay has been doing this throughout the country over 15 years.
Officials recently took back all the tablets because half of them stopped working. They claim that they will begin a full-scale distribution in February (we'll see). Naturally, we all think staff intentionally screwed with the tablets somewhere along the way because they don't want us to have them as opposed to the administration who do.
As you might imagine we prisoners eagerly await the use of this "new" tech. We missed out on the MP-3. Why? just because they oppose us having anything that may relieve us from this misery. In their minds we are not suffering enough. Do you see why I refer to them as sadists?
Now, this is my view with regards to the president being impeached. Listen to his own words. He told you that he is rich because he is greedy. Now, what type of character does a person have to have to admit to being greedy and get rich in New York because of it? Do you think that this person would sell out the country to Russia because of his greed, especially being in power of the presidency? Would he sell us out to Turkey? How about China, North Korea? Did he not say that he thought that no president should be impeached if he is doing his job? Suppose that he was unlawfully enriching himself while "doing his job? How far do you think he would go if he is re-elected and thus having nothing to lose? What is the real reason he won't release his taxes for public scrutiny? Is it because he inflated his net worth to obtain a larger loan from the bank then under-reported his income to cheat the IRS? Would our former president have been elected if it were found out that he paid hush money to keep an adulterous affair quiet? The scriptures said that "... the love of money is the root of all evil." Do we continue to look the other way because he gives us what we want? I believe that in his mind as long as he continues to give us what we want we owe him. Therefore, we should let him do whatever he wants. That sounds like a deal that the devil would make with the saints. Would you accept it? Did you accept it?
Let's be honest. The president does his job like he runs his business. In my opinion he puts the squeeze on people who won't give him what he wants in order to get what he wants. If that doesn't work he will try to assassinate that person's character. Ask the Pequots here in Connecticut what did he do when they wouldn't go in with him in building a casino.
Don't get in bed with the devil. You will crawl out with red paint all over you and everyone will know what you've been doing.

Hello father long time, no speak. If you really think Connecticut prison system is scrip corrupt? They don't have "new" tech in the prisons down here and they're not even trying to get it! Yes your oldest son has been in the system. We can't even degrees in these prison. Only a ged. They don't even teach trade skills. Its sad. How can a father of 4 afford to raise his kids with a ged and no trade skills. Gd thing I'm intelligent!
(scanned reply – view as blog post)
uploaded March 9, 2020.  Original (PDF) 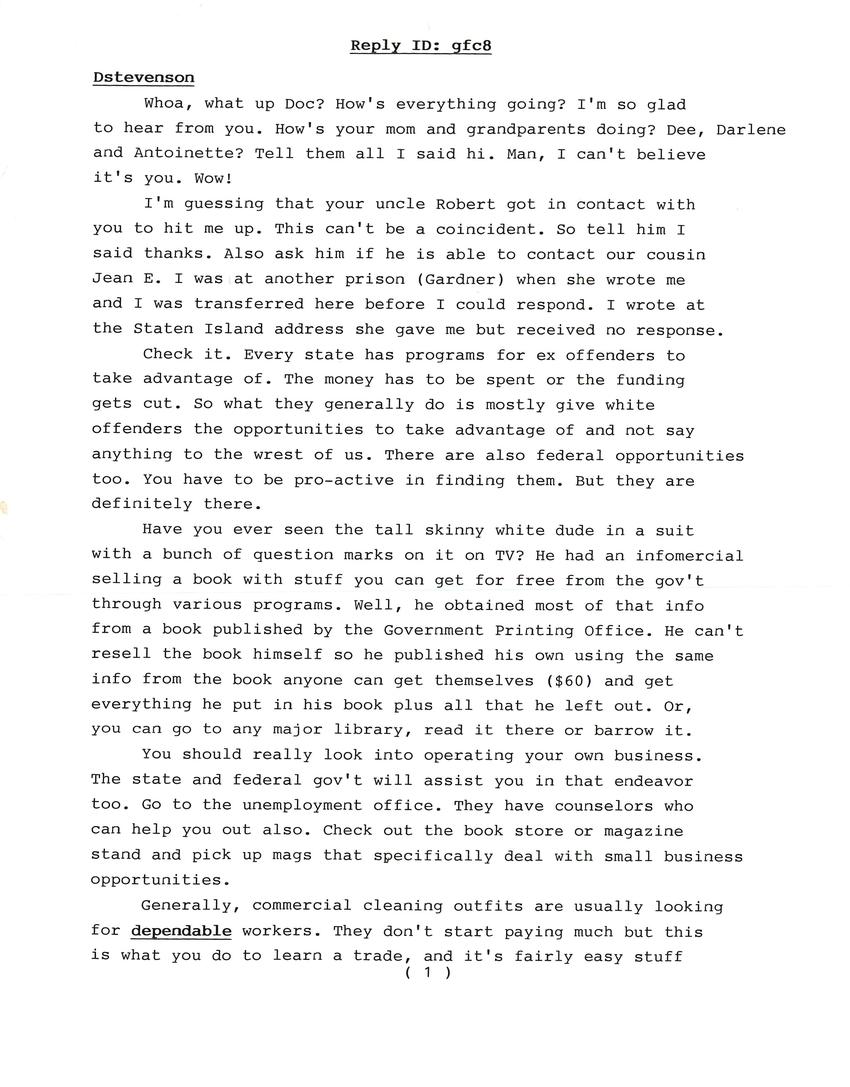 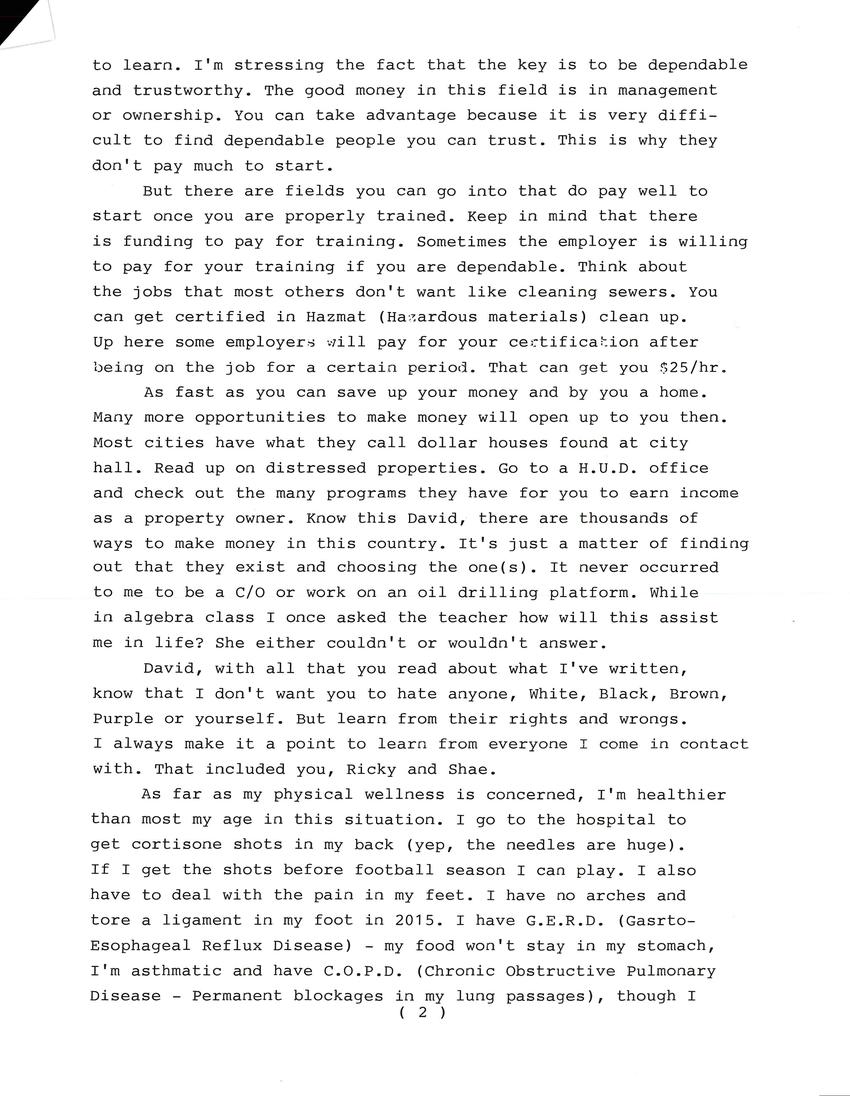 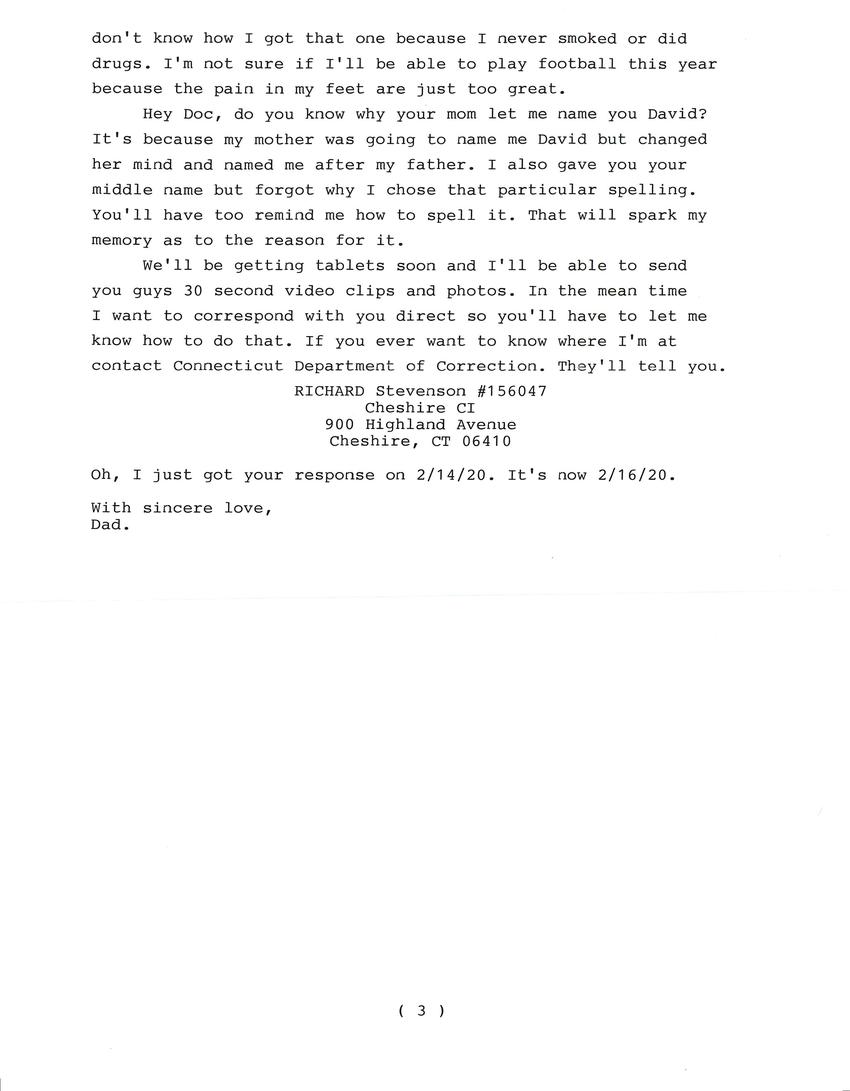