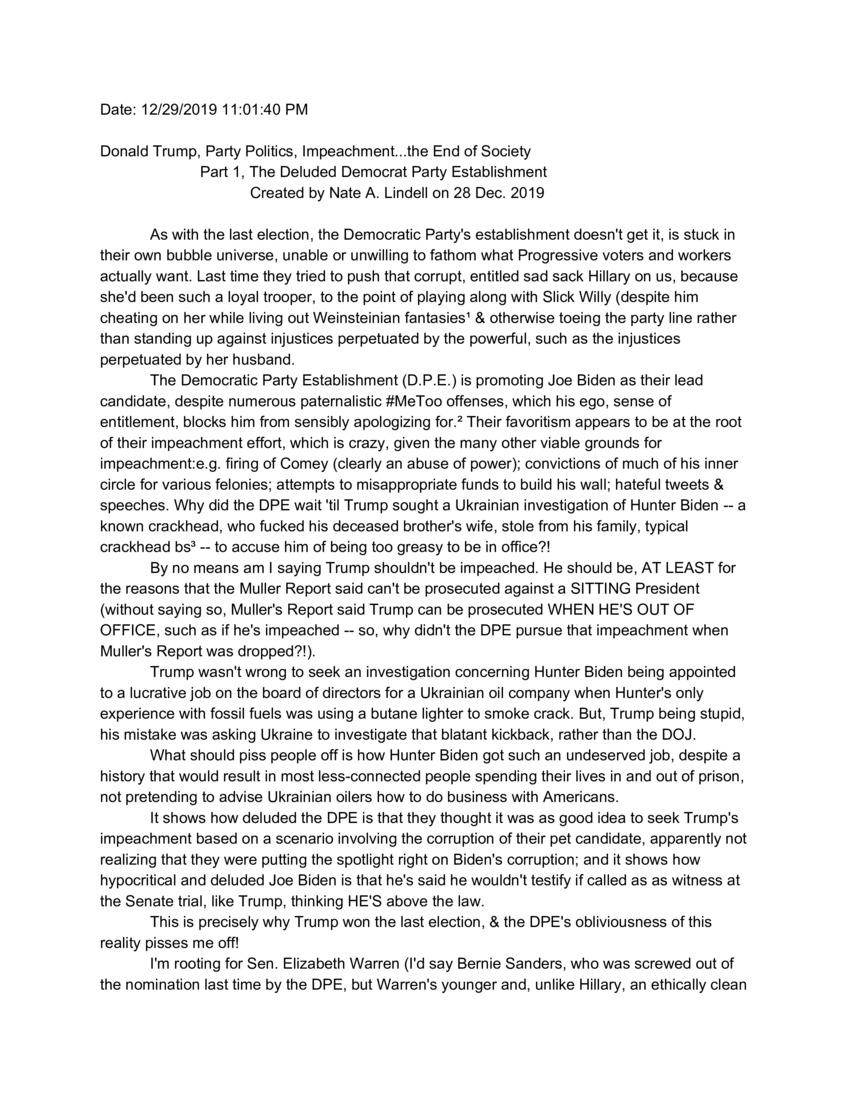 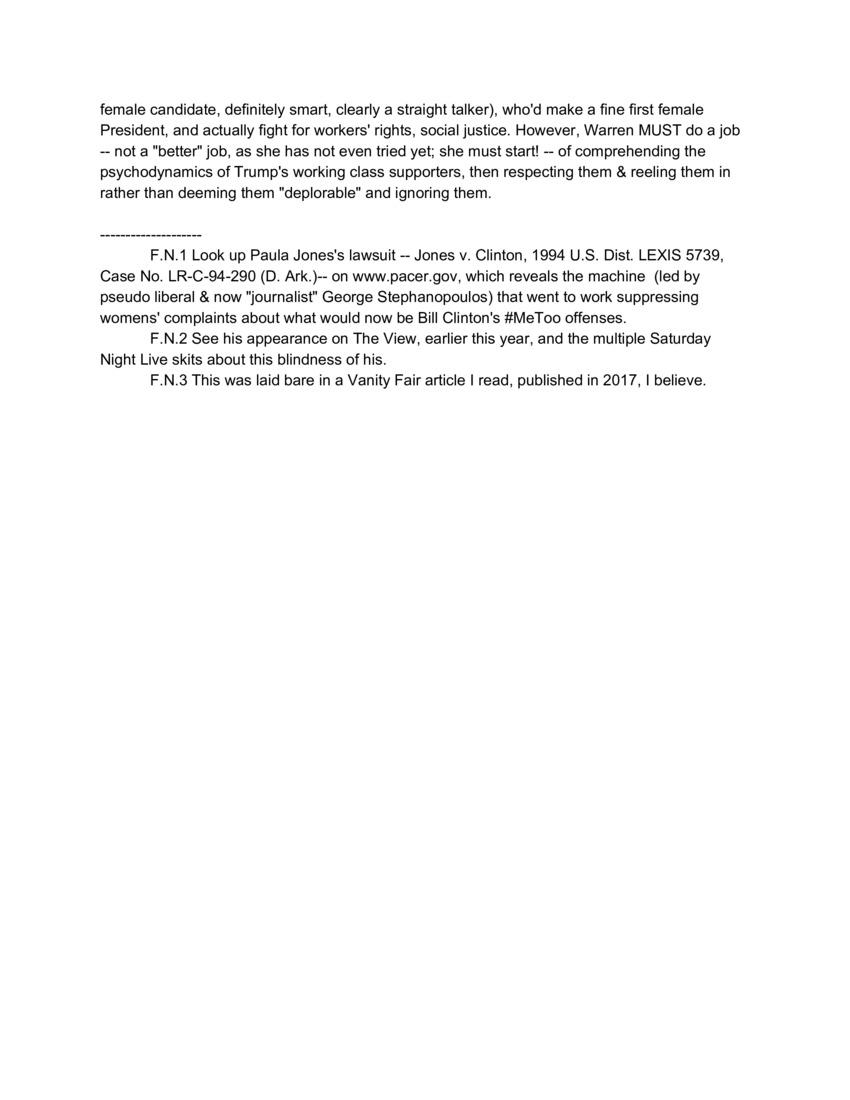 As with the last election, the Democratic Party's establishment doesn't get it, is stuck in their own bubble universe, unable or unwilling to fathom what progressive voters and workers actually want. Last time they tried to push that corrupt, entitled sad sack Hillary on us, because she'd been such a loyal trooper, to the point t of playing along with Slick Willy (despite him cheating on her while living out Weinsteinian fantasies¹ & otherwise toeing the party line rather than standing up against injustices perpetrated by the powerful, such as the injustices perpetrated by her husband.
The Democratic Party Establishment (D.P.E.) is promoting Joe Biden as their lead candidate, despite numerous paternalistic #MeToo offenses, which his ego, sense of entitlement, blocks him from sensibly apologizing for.² Their favoritism appears to be at the root of their impeachment effort, which is crazy, given the many other viable grounds for impeachment: e.g. firing of Comey (clearly an abuse of power); convictions of much of his inner circle for various felonies; attempts to misappropriate fund to build his wall; hateful tweets & speeches. Why did the DPE wait 'til Trump sought a Ukrainian investigation of Hunter Biden -- a known crackhead, who fucked his deceased brother's wife, stole from his family, typical crackhead bs³ -- to accuse him of being too greasy to be in office?!
By no means am I saying Trump shouldn't be impeached. He should be, AT LEAST for the reasons that the Muller Report said can't be prosecuted against a SITTING President (without saying so, Muller's Report said Trump can be prosecuted WHEN HE'S OUT OF OFFICE, such as if he's impeached -- so, why didn't the DPE pursue that impeachment when Muller's Report was dropped?!).
Trump wasn't wrong to seek an investigation concerning Hunter Biden being appointed to a lucrative job on the board of directors for a Ukrainian oil company when Hunter's only experience with fossil fuels was using a butane lighter to smoke crack. But, Trump being stupid, his mistake was asking Ukraine to investigate that blatant kickback, rather than the DOJ.
What should piss people off is how Hunter Biden got such an undeserved job, despite a history that would result in most less-connected people spending their lives in and out of prison, not pretending to advise Ukrainian oilers how to do business with Americans.
It shows how deluded the DPE is that they thought it was as good idea to seek Trump's impeachment based on a scenario involving the corruption of their pet candidate, apparently not realizing that they were putting the spotlight right on Biden's corruption; and it shows how hypocritical and deluded Joe Biden is that he's said he wouldn't testify if called as a witness at the Senate trial, like Trump, thinking HE's above the law.
This is precisely why Trump won the last election, & the DPE's obliviousness of this reality pisses me off!
I'm rooting for Sen. Elizbeth Warren (I'd say Bernie Sanders, who was screwed out of the nomination last time by the DPE, but Warren's younger and, unlike Hillary, an ethically clean female candidate, definitely smart, clearly a straight talker), who'd make a fine first female President, and actually fight for workers' rights, social justice. However Warren MUST do a job -- not a "better" job, as she has not even tried yet; she must start! -- of comprehending the psychodynamic of Trump's working class supporters, then respecting them & reeling them in rather than deeming them "deplorable" and ignoring them.

F.N. 1 Look up Paula Jone's lawsuit -- Jones v. Clinton, 1994 U.S. Dist. LEXIS 5379, Case No. LR-C-94-290 (D. Ark.)-- on www.pacer.gov, which reveals the machine (led by pseudo liberal & now "journalist" George Stephanopoulos) that went to work suppressing women's' complaints about what would now be Bill Clinton's #MeToo offenses.
F.N. 2 See his appearance on The View, earlier this year, and the multiple Saturday Night Live skits about this blindness of his.
F.N. 3 This was laid bare in a Vanity Fair article I read, published in 2017, I believe.