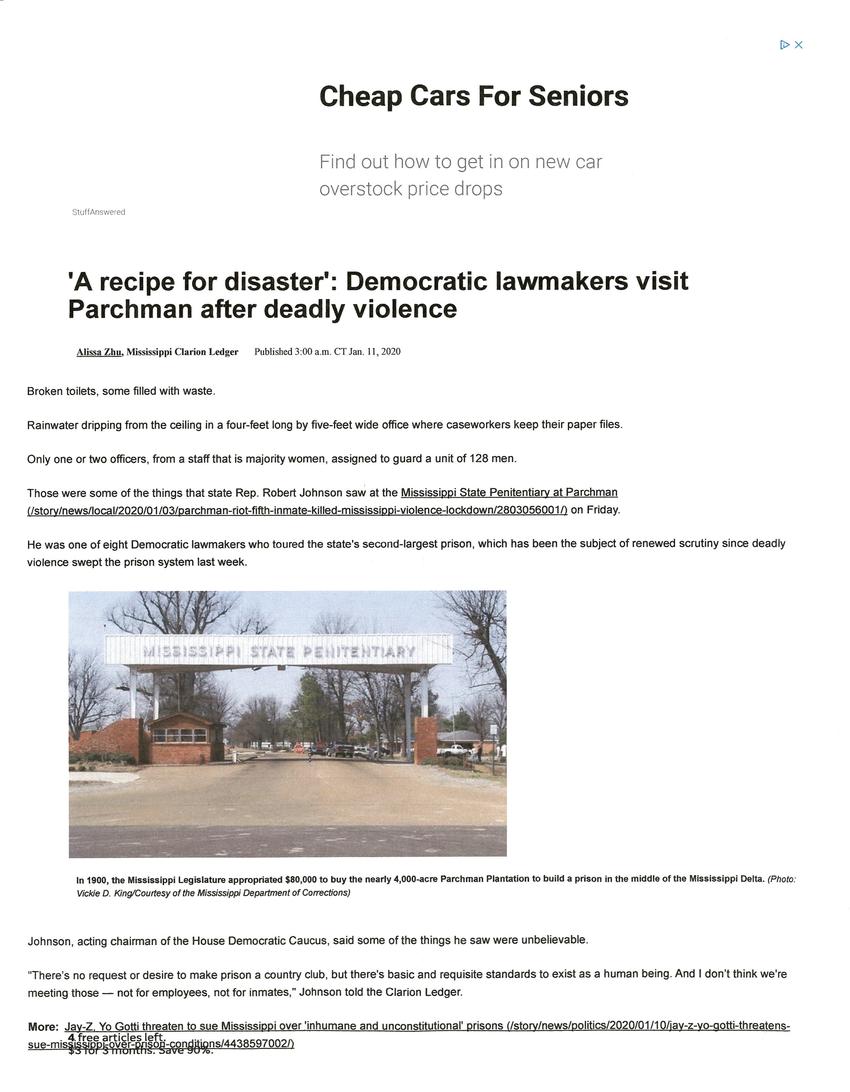 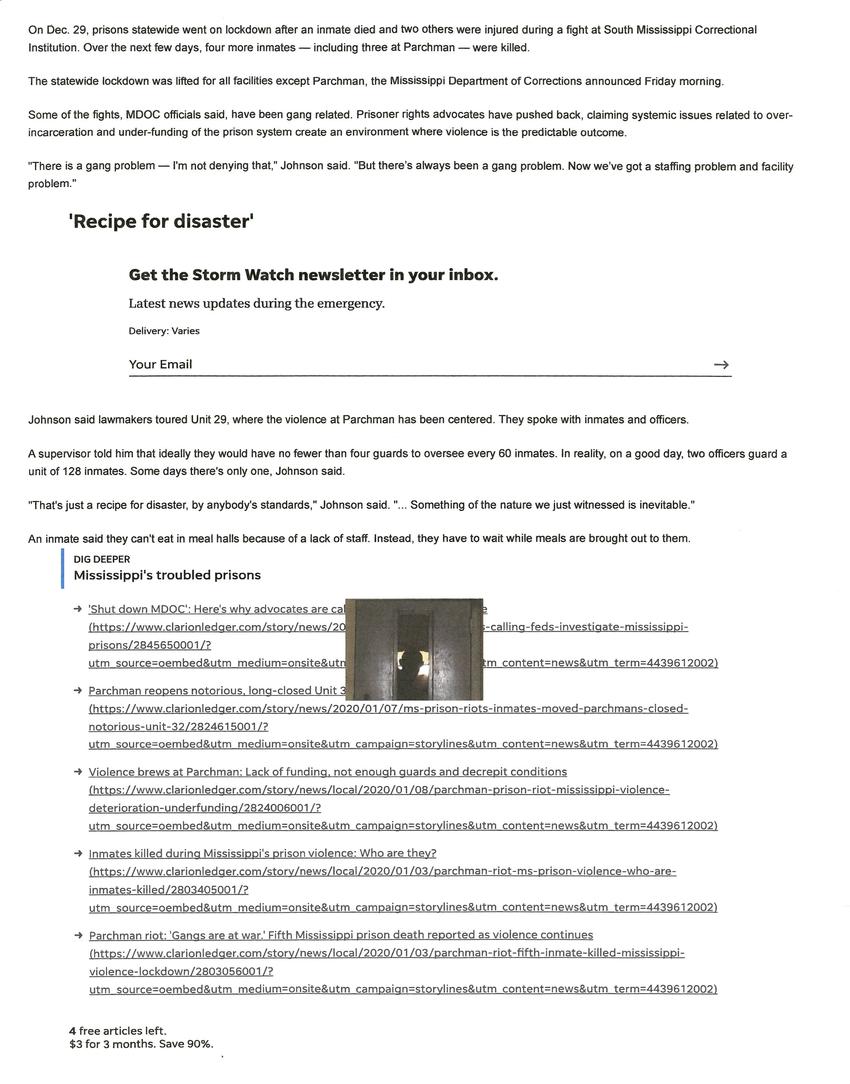 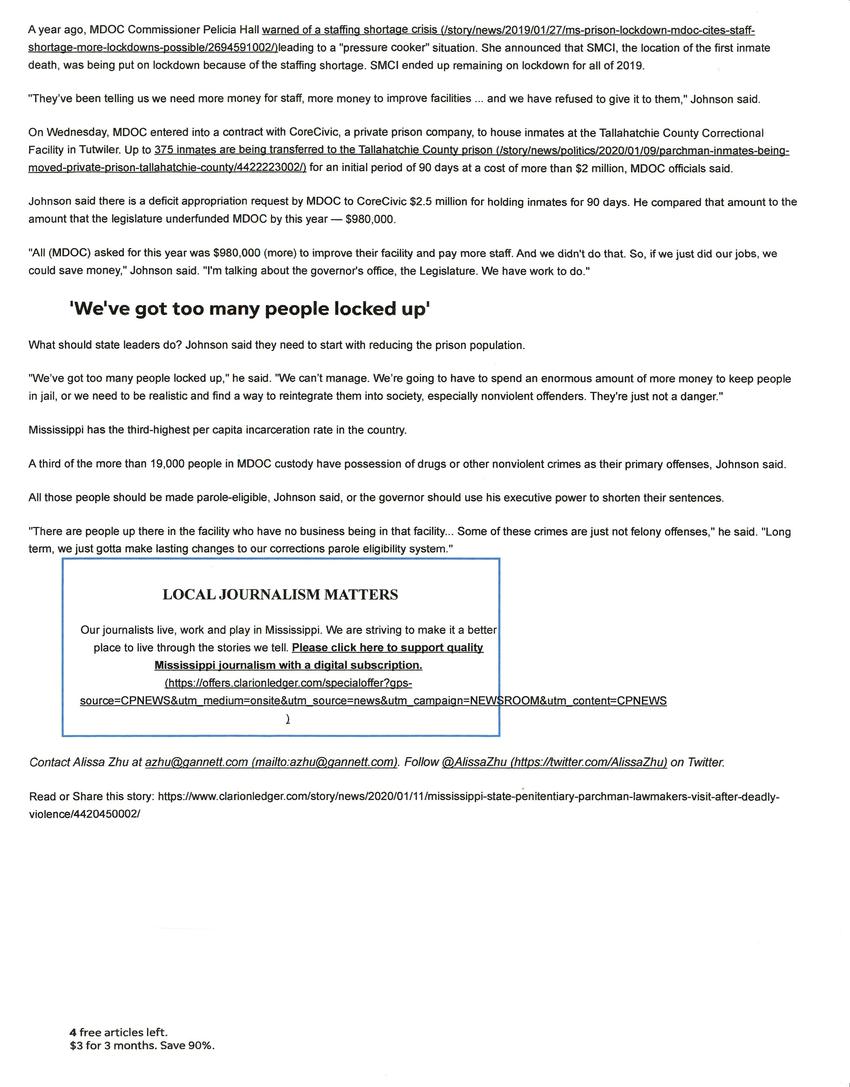 Broken toilets, some filled with waste.

Rainwater dripping from the ceiling in a four-feet long by five-feet wide office where caseworkers keep their paper files.

Only one or two officers, from a staff that is majority women, assigned to guard a unit of 128 men.

Those were some of the things that state Rep. Robert Johnson saw at the Mississippi State Penitentiary at Parchman on Friday.

He was one of eight Democratic lawmakers who toured the state's second-largest prison, which has been the subject of renewed scrutiny since deadly violence swept the prison system last week.
In 1900, the Mississippi Legislature appropriated $80,000 to buy the nearly 4,000-acre Parchman Plantation to build a prison in the middle of the Mississippi Delta.
Vickie D. King/Courtesy of the Mississippi Department of Corrections

Johnson, acting chairman of the House Democratic Caucus, said some of the things he saw were unbelievable.

"There’s no request or desire to make prison a country club, but there's basic and requisite standards to exist as a human being. And I don’t think we're meeting those — not for employees, not for inmates," Johnson told the Clarion Ledger.

More: Jay-Z, Yo Gotti threaten to sue Mississippi over 'inhumane and unconstitutional' prisons

On Dec. 29, prisons statewide went on lockdown after an inmate died and two others were injured during a fight at South Mississippi Correctional Institution. Over the next few days, four more inmates — including three at Parchman — were killed.

The statewide lockdown was lifted for all facilities except Parchman, the Mississippi Department of Corrections announced Friday morning.

Some of the fights, MDOC officials said, have been gang related. Prisoner rights advocates have pushed back, claiming systemic issues related to over-incarceration and under-funding of the prison system create an environment where violence is the predictable outcome.

"There is a gang problem — I'm not denying that," Johnson said. "But there’s always been a gang problem. Now we’ve got a staffing problem and facility problem."
'Recipe for disaster'

Johnson said lawmakers toured Unit 29, where the violence at Parchman has been centered. They spoke with inmates and officers.

A supervisor told him that ideally they would have no fewer than four guards to oversee every 60 inmates. In reality, on a good day, two officers guard a unit of 128 inmates. Some days there's only one, Johnson said.

"That's just a recipe for disaster, by anybody's standards," Johnson said. "... Something of the nature we just witnessed is inevitable."

An inmate said they can't eat in meal halls because of a lack of staff. Instead, they have to wait while meals are brought out to them.

A year ago, MDOC Commissioner Pelicia Hall warned of a staffing shortage crisis leading to a "pressure cooker" situation. She announced that SMCI, the location of the first inmate death, was being put on lockdown because of the staffing shortage. SMCI ended up remaining on lockdown for all of 2019.

"They’ve been telling us we need more money for staff, more money to improve facilities ... and we have refused to give it to them," Johnson said.

Johnson said there is a deficit appropriation request by MDOC to CoreCivic $2.5 million for holding inmates for 90 days. He compared that amount to the amount that the legislature underfunded MDOC by this year — $980,000.

"All (MDOC) asked for this year was $980,000 (more) to improve their facility and pay more staff. And we didn't do that. So, if we just did our jobs, we could save money," Johnson said. "I'm talking about the governor's office, the Legislature. We have work to do."
'We've got too many people locked up'

What should state leaders do? Johnson said they need to start with reducing the prison population.

"We’ve got too many people locked up," he said. "We can’t manage. We’re going to have to spend an enormous amount of more money to keep people in jail, or we need to be realistic and find a way to reintegrate them into society, especially nonviolent offenders. They're just not a danger."

Mississippi has the third-highest per capita incarceration rate in the country.

A third of the more than 19,000 people in MDOC custody have possession of drugs or other nonviolent crimes as their primary offenses, Johnson said.

All those people should be made parole-eligible, Johnson said, or the governor should use his executive power to shorten their sentences.

"There are people up there in the facility who have no business being in that facility... Some of these crimes are just not felony offenses," he said. "Long term, we just gotta make lasting changes to our corrections parole eligibility system."

I agree whole heartedly that non-violent offenders must be released to reduce the population.

But I also believe that those who have one felony on their record...a crime of passion...a one time act of violence...should be assessed for rehabilitation after ten years. Most one time violent offenders made a serious mistake that amounts to one bad decision...five minutes of their life really...that may not have happened had even one circumstance been changed.

This problem is not isolated in Mississippi. It is the status quo across much of America. California has taken a much different approach to rehabilitation...and should be looked at as a model for change. My deepest condolences to every family who has suffered for this crisis of mass incarceration. I pray the families of victims might open their hearts to mercy and compassion for the perpetrators of the crime that affected them for all their life.

I appreciate the social justice you represent Charles and I applaud Between the Bars for publishing your exposes.