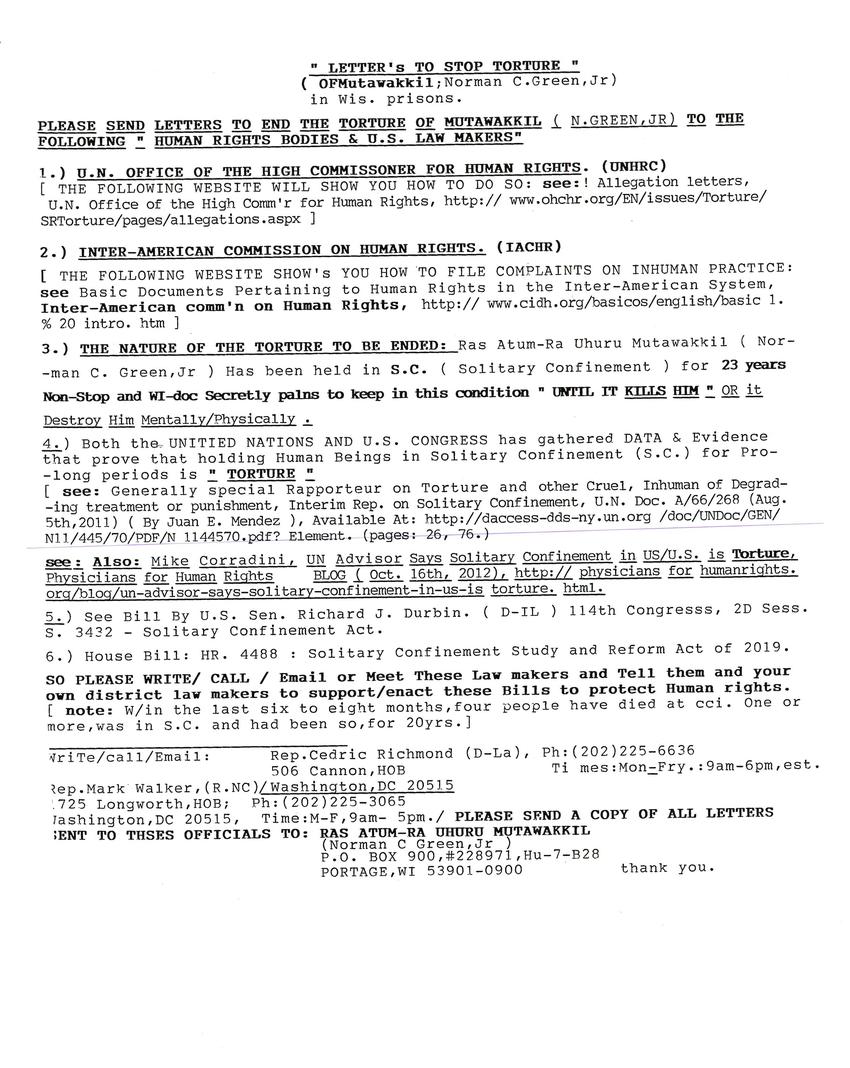 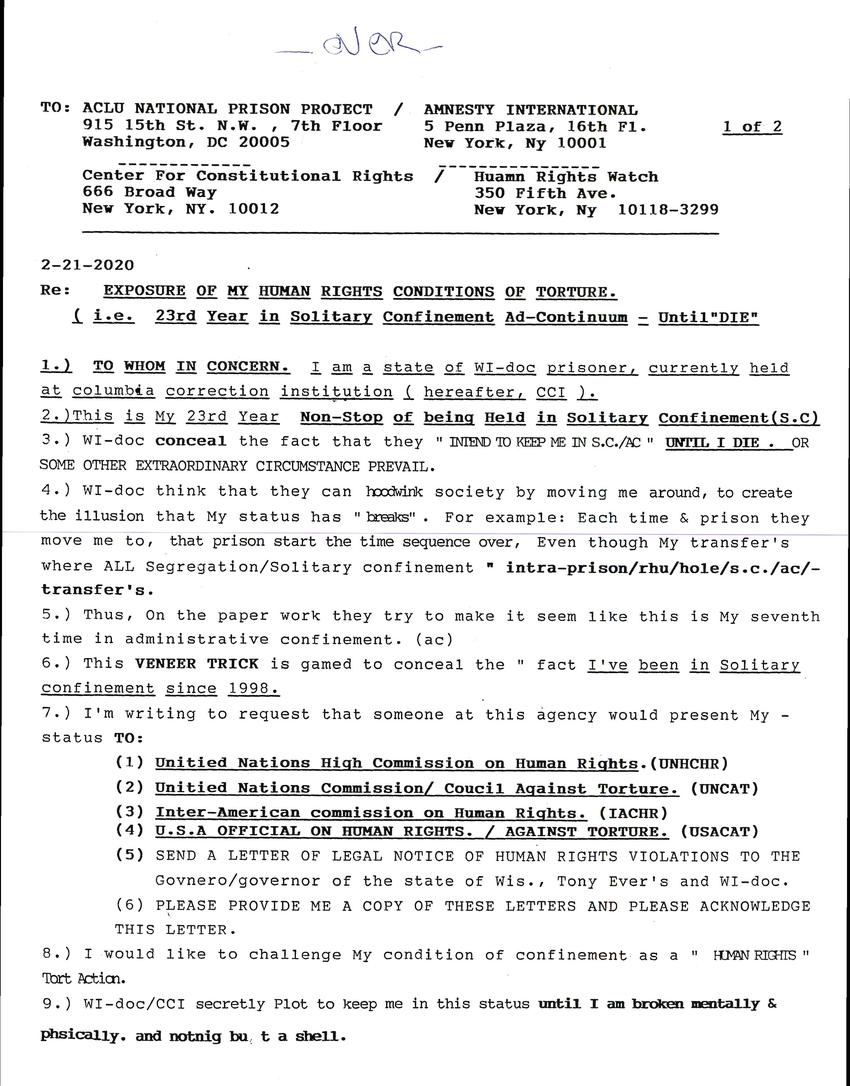 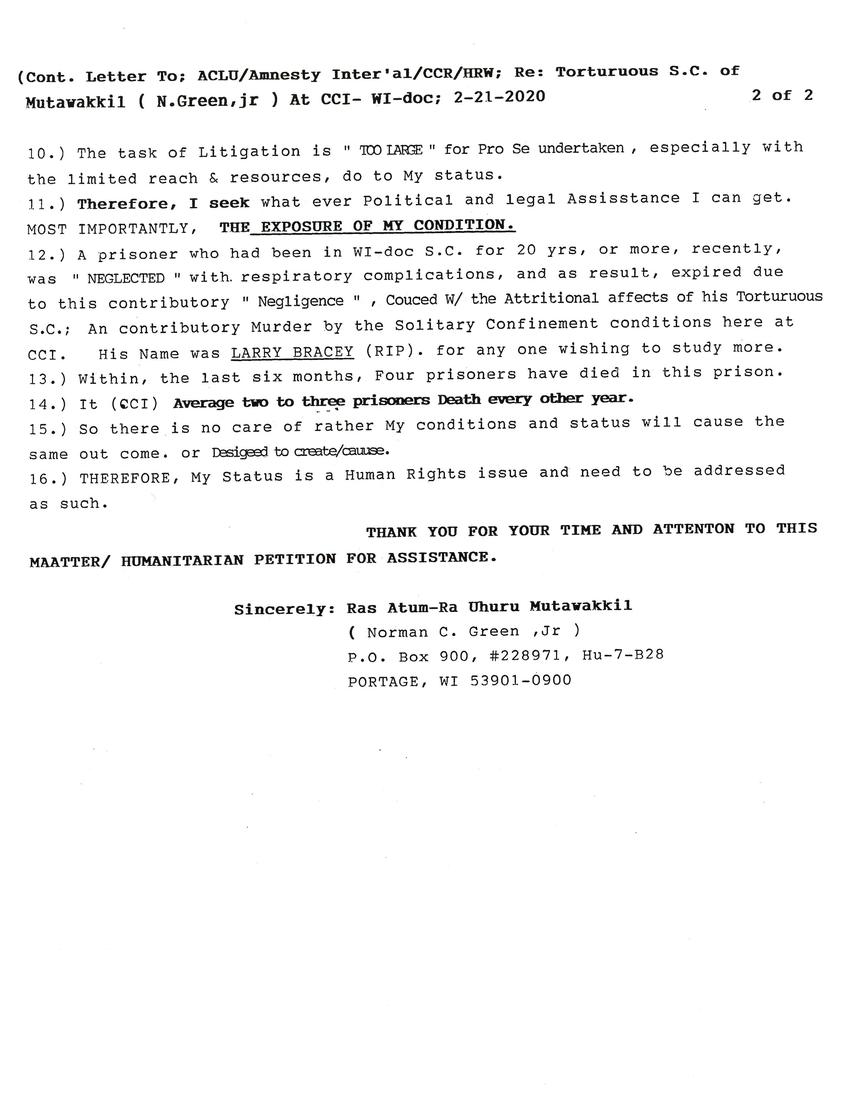 1.) U.N. OFFICE OF THE HIGH COMMISSIONER FOR HUMAN RIGHTS. (UNHRC)
[ THE FOLLOWING WEBSITE WILL SHOW YOU HOW TO DO SO: see: ! Allegation letters, U.N. Office of the High Comm'r for Human Rights, http://www.ohchr.org/EN/issues/Torture/SRTorture/pages/allegations.aspx ]

3.) THE NATURE OF THE TORTURE TO BE ENDED: Ras Atum-Ra Uhuru Mutawakkil ( Norman C. Green, Jr) Has been held in S.C. (Solitary Confinement) for 23 years Non-Stop and WI-doc Secretly plans to keep in this condition "UNTIL IT KILLS HIM" OR it Destroy Him Mentally/Physically.

SO PLEASE WRITE/ CALL/ Email or Meet These Law makers and Tell them and your own district law makers to support/enact these Bills to protect Human rights.
[ note: W/in the last six to eight months, four people have died at cci. One or more, was in S.C. and had been so, for 20yrs.]

Re: EXPOSURE OF MY HUMAN RIGHTS CONDITIONS OF TORTURE.
(i.e. 23rd Year in Solitary Confinement Ad-Continuum - Until "DIE"

1.) TO WHOM IN CONCERN. I am a state of WI-doc prisoner, currently held at Columbia correction institution (hereafter, CCI).
2.) This is My 23rd Year Non-Stop of being Held in Solitary Confinement (S.C)
3.) WI-doc conceal the fact that they "INTEND TO KEEP ME IN S.C./AC" UNTIL I DIE. OR SOME OTHER EXTRAORDINARY CIRCUMSTANCE PREVAIL.
4.) WI-doc think that they can hoodwink society by moving me around, to create the illusion that My status has "breaks". For example: Each time & prison they move me to, that prison start the time sequence over, Even though My transfer's where ALL Segregation/Solitary confinement "intra-prison/rhu/hole/s.c./ac/-transfer's.
5.) Thus, On the paper work they try to make it seem like this is My seventh time in administrative confinement. (ac)
6.) This VENEER TRICK is gamed to conceal the "fact I've been in Solitary confinement since 1998.
7.) I'm writing to request that someone at this agency would present My - status TO:
(1) United Nations High Commission on Human Rights. (UNHCHR)
(2) United Nations Commission/Council Against Torture. (UNCAT)
(3) Inter-American commission on Human Rights. (IACHR)
(4) U.S.A. OFFICIAL ON HUMAN RIGHTS. / AGAINST TORTURE (USACAT)
(5) SEND A LETTER OF LEGAL NOTICE OF HUMAN RIGHTS VIOLATIONS TO THE Govnero/governor of the state of Wis., Tony Ever's and WI-doc.
(6) PLEASE PROVIDE ME A COPY OF THESE LETTERS AND PLEASE ACKNOWLEDGE THIS LETTER.
8.) I would like to challenge My condition of confinement as a "HUMAN RIGHTS" Tort Action.
9.) WI-doc/CCI secretly Plot to keep me in this status until I am broken mentally & physically, and nothing but a shell.

10.) The task of Litigation is "TOO LARGE" for Pro Se undertaken, especially with the limited reach & resources, do to My status.
11.) Therefore, I seek what ever Political and legal Assistance I can get. MOST IMPORTANTLY, THE EXPOSURE OF MY CONDITION.
12.) A prisoner who had been in WI-doc S.C. for 20 yrs, or more, recently, was "NEGLECTED" with respiratory complications, and as result, expired due to this contributory "Negligence", Couced W/ the Attritional affects of his Torturous S.C.; A contributory Murder by the Solitaary Confinement conditions here at CCO. His Name was LARRY BRACEY (RIP). for any one wishing to study more.
13.) Within, the last six months, Four prisoners have died in this prison.
14.) It (CCI) Average two to three prisoners Death every other year.
15.) So there is no care of rather My condition and status will cause the same out come. or Designed to create/cause.
16.) THEREFORE, My Status is a Human Rights issue and need to be addressed as such.

THANK YOU FOR YOUR TIME AND ATTENTION TO THIS MATTER/ HUMANITARIAN PETITION FOR ASSISTANCE.