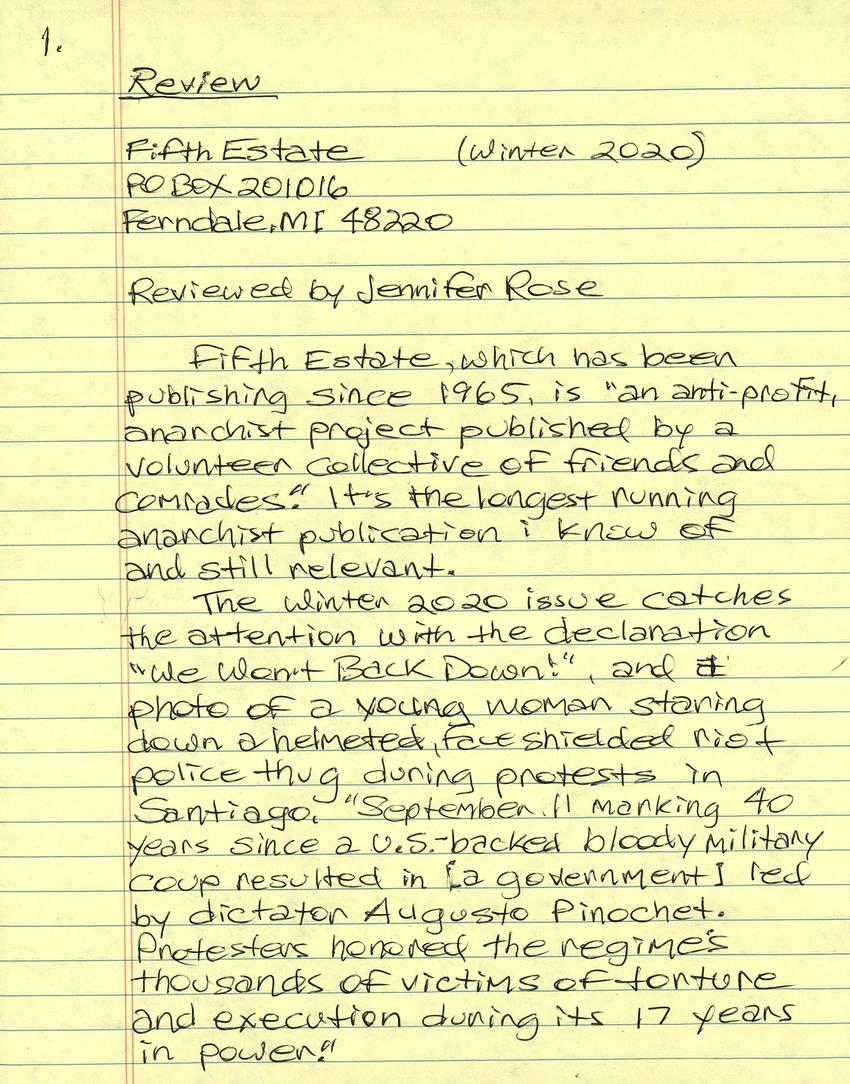 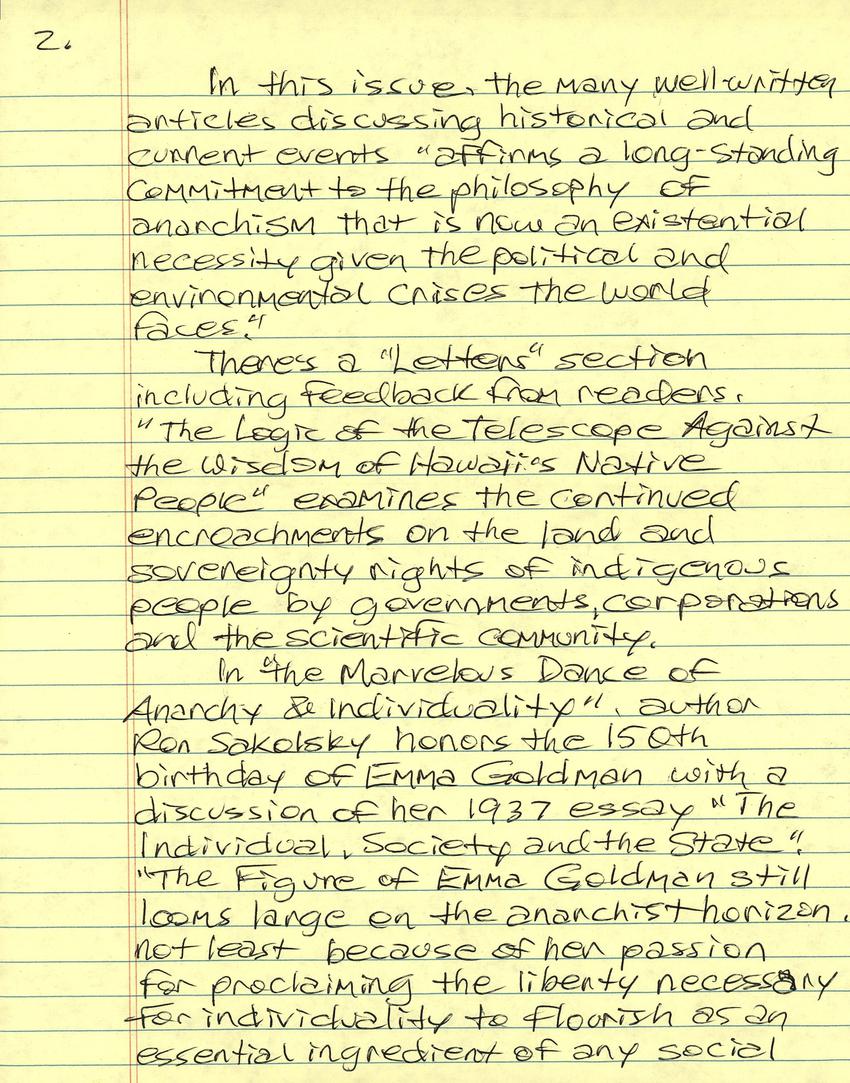 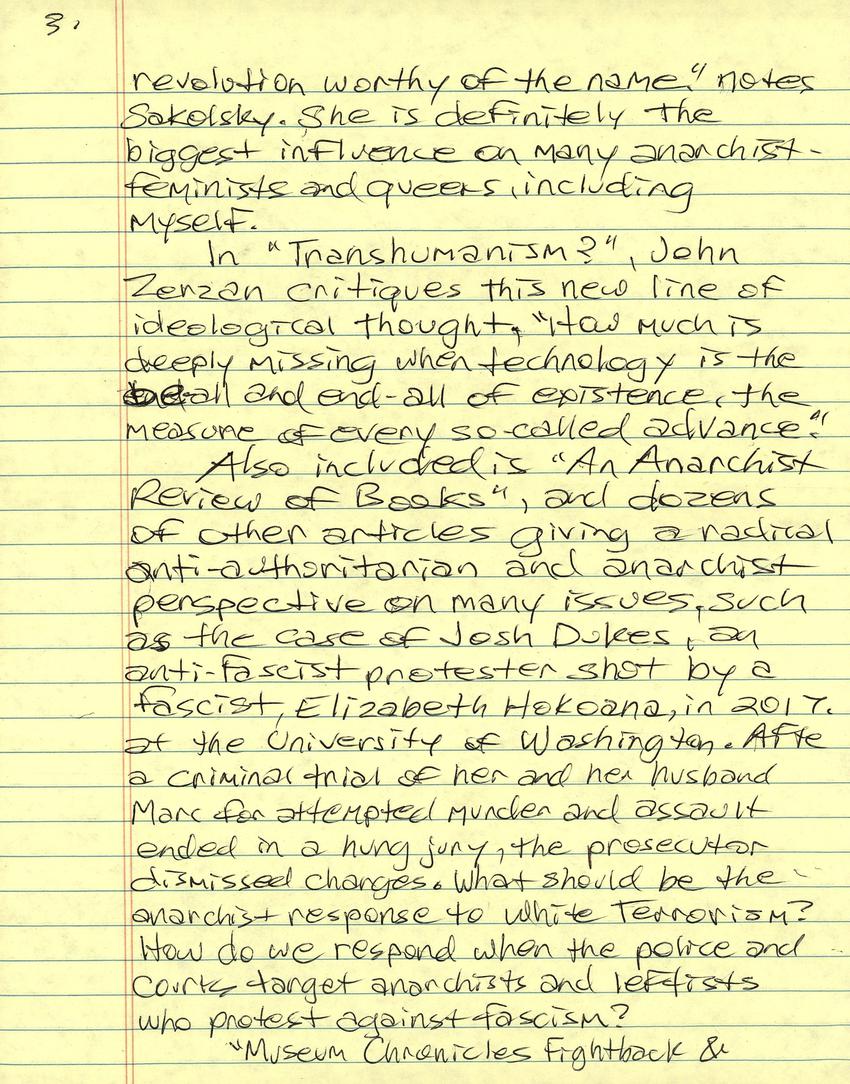 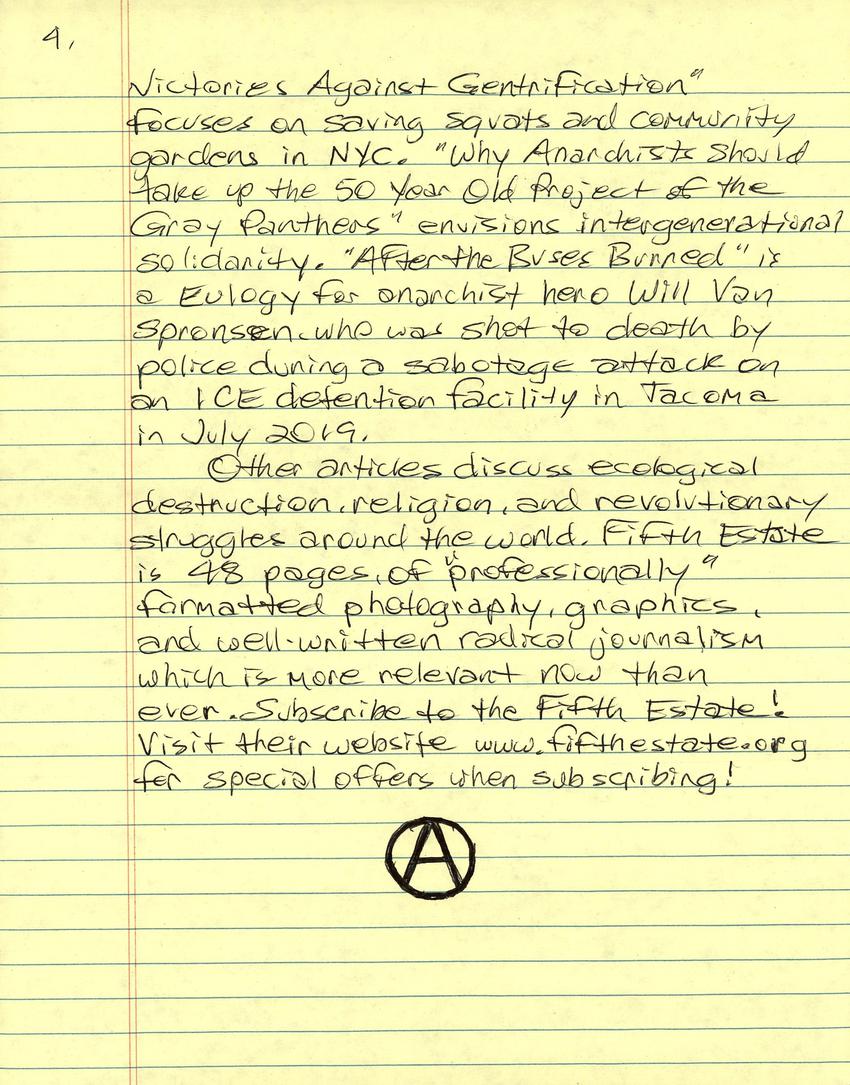 Fifth Estate, which has been publishing since 1965, is "an anti-profit, anarchist project published by a volunteer collective of friends and comrades." It's the longest running anarchist publication I know of and still relevant.
The Winter 2020 issue catches the attention with the declaration "We Won't Back Down!", and a photo of a young women staring down a helmeted, face shielded riot police thug during protests in Santiago, "September 11 marking 40 years since a U.S.-backed bloody military coup resulted in a government led by dictator Augusto Pinochet. Protestors honored the regimes thousands of victims of torture and execution during its 17 years in power."

2.
In this issue, the many well-written articles discussing historical and current events "affirms a long-standing commitment to the philosophy of anarchism that is now an existential necessity given the political and environmental crises the world faces."
There's a "Letters" section including feedback from reachers, "The Logic of the Telescope Against the Wisdom. of Hawaii's Native People" examines the continued encroachments on the land and sovereignty rights of indigenous people by governments, corporations and the scientific community.
In "The Marvelous Dance of Anarchy and Individuality" author Ron Sakolsky honors the 150th birthday of Emma Goldman with a discussion of her 1937 essay "The Individual, Society and the State". "The Figure of Emma Goldman still looms large on the anarchist horizon not least because of her passion for proclaiming the liberty necessary for individuality to flourish as an essential ingredient of any social
3.
revolution worthy of the name" notes Sakolsky. She is definitely the biggest influence on many anarchist feminists and queens, including myself.
In "Transhumantism?", John Zerzan critiques this new line of ideological thought, "How much is deeply missing when technology is the [?] and end-all of existence, the measure of every so called advance."
Also included is "An Anarchist Review of Books", and dozens of other articles giving a radical anti-fascist protester shot by a fascist, Elizabeth Hokoana, in 2017, at the University of Washington. After a criminal trial of her and her husband Marc for attempted murder and assault ended in a hung jury, the prosecutor dismissed charges. What should be the anarchist response to white terrorism? How do we respond when the police and courts target anarchist and leftists who protest against fascism?
"Museum Chronicles Fight back and

4.
Victories Against Gentrification" focuses on saving squats and community gardens in NYC. "Why Anarchists should take up the 50 Year Old Project of the Gray Panthers" envisions intergenerational solidarity. "After the Buses Burned" is a Eulogy for anarchist hero Will Van Spronsen, who was shot to death by police during a sabotage attack on an ICE detention facility in Tacoma in July 2019.
Other articles discuss ecological destruction , religion, and revolutionary struggles around the world. Fifth Estate is 48 pages of "professionally" formatted photography, graphics, and well-written radical journalism which is more relevant now than ever. Subscribe to the Fifth Estate! Visit their website www.fifthestate.org for special offers when subscribing!
[signed with the anarchist symbol]