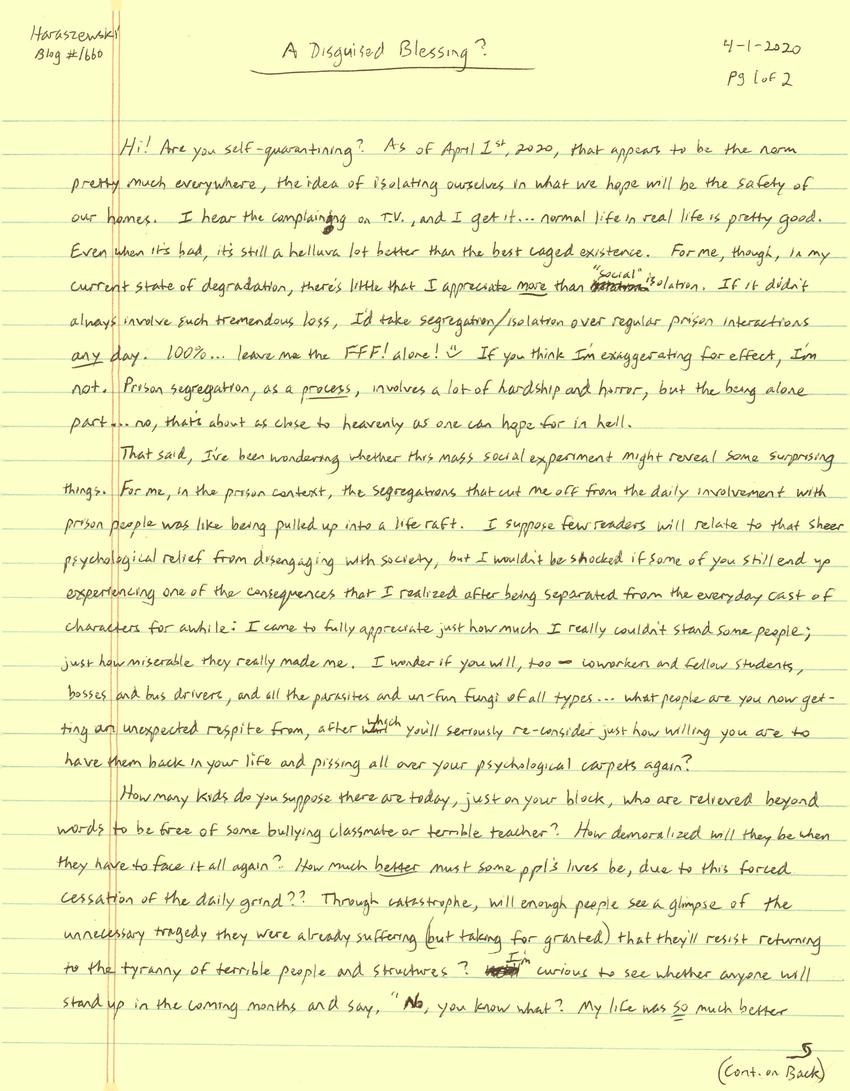 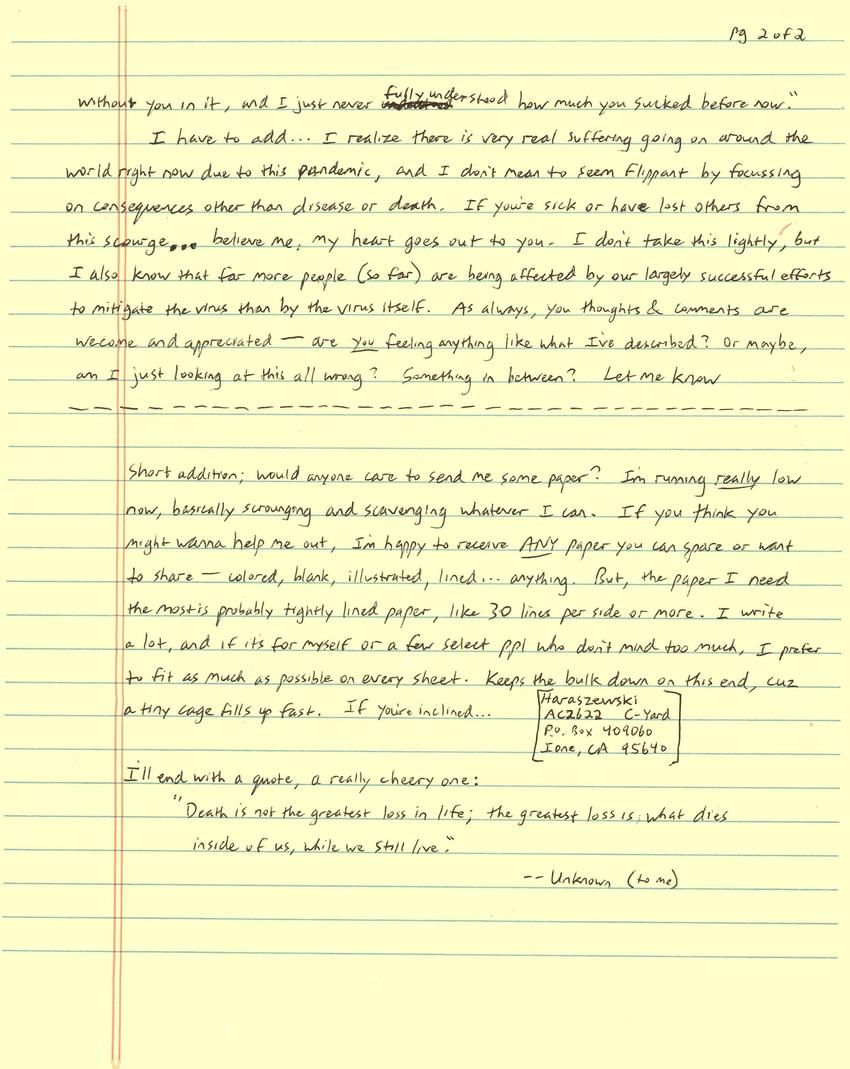 Hi! Are you self-quarantining? As of April 1st, 2020, that appears to be the norm pretty much everywhere, the idea of isolating ourselves in what we hope will be the safety of our homes. I hear the complaining on T.V., and I get it... normal life in real life is pretty good. Even when it's bad, it's still a helluva lot better than the best caged existence. For me, though, in my current state of degradation, there's little that I appreciate MORE than "social" isolation. If it didn't always involve such tremendous loss, I'd take segregation/isolation over regular prison interactions ANY day. 100%... leave me the FFF! alone! :) If you think I'm exaggerating for effect, I'm not. Prison segregation, as a PROCESS, involves a lot of hardship and horror, but the being alone part... no, that's about as close to heavenly as one can hope for in hell.

That said, I've been wondering whether this mass social experiment might reveal some surprising things. For me, in the prison context, the segregations that cut me off from the daily involvement with prison people was like being pulled up into a life raft. I suppose few readers will related to that sheer psychological relief from disengaging with society, but I wouldn't be shocked if some of you still end up experiencing one of the consequences that I realized after being separated from the everyday cast of characters for awhile: I came to fully appreciate just how much I really couldn't stand some people; just how miserable they really made me. I wonder if you will, too - coworkers and fellow students, bosses and bus drivers, and all the parasites and un-fun fungi of all types... what people are you now getting an unexpected respite from, after which you'll seriously re-consider just how willing you are to have them back in your life and pissing all over your psychological carpets again?

How many kids do you suppose there are today, just on your block, who are relieved beyond words to be free of some bullying classmate or terrible teacher? How demoralized will they be when they have to face it all again? How much BETTER must some people's lives be, due to this forced cessation of the daily grind?? Through catastrophe, will enough people see a glimpse of the unnecessary tragedy they were already suffering (but taking for granted) that they'll resist returning to the tyranny of terrible people and structures? I'm curious to see whether anyone will stand up in the coming months and say, "No, you know what? My life was SO much better without you in it, and I just never fully understood how much you sucked before now."

I have to add... I realize there is very real suffering going on around the world right now due to this pandemic, and I don't mean to seem flippant by focussing on consequences other than disease or death. If you're sick or have lost others from this scourge...believe me, my heart goes out to you. I don't take this lightly, but I also know that far more people (so far) are being affected by our largely successful efforts to mitigate the virus than by the virus itself. As always, your thoughts & comments are welcome and appreciated - are you feeling anything like what I've described? Or maybe, am I just looking at this all wrong? Something in between? Let me know

Short addition; would anyone care to send me some paper? I'm running really low now, basically scourging and scavenging whatever I can. If you think you might wanna help me out, I'm happy to receive ANY paper you can spare or want to share - colored, blank, illustrated, lined...anything. But, the paper I need the most is probably tightly lined paper, like 30 lines per side or more. I write a lot, and if it's for myself or a few select people who don't mind too much, I prefer to fit as much as possible on every sheet. Keeps the bulk down on this end cuz a tiny cage fills up fast. If you're inclined...