Put the Bunny Back in the Box 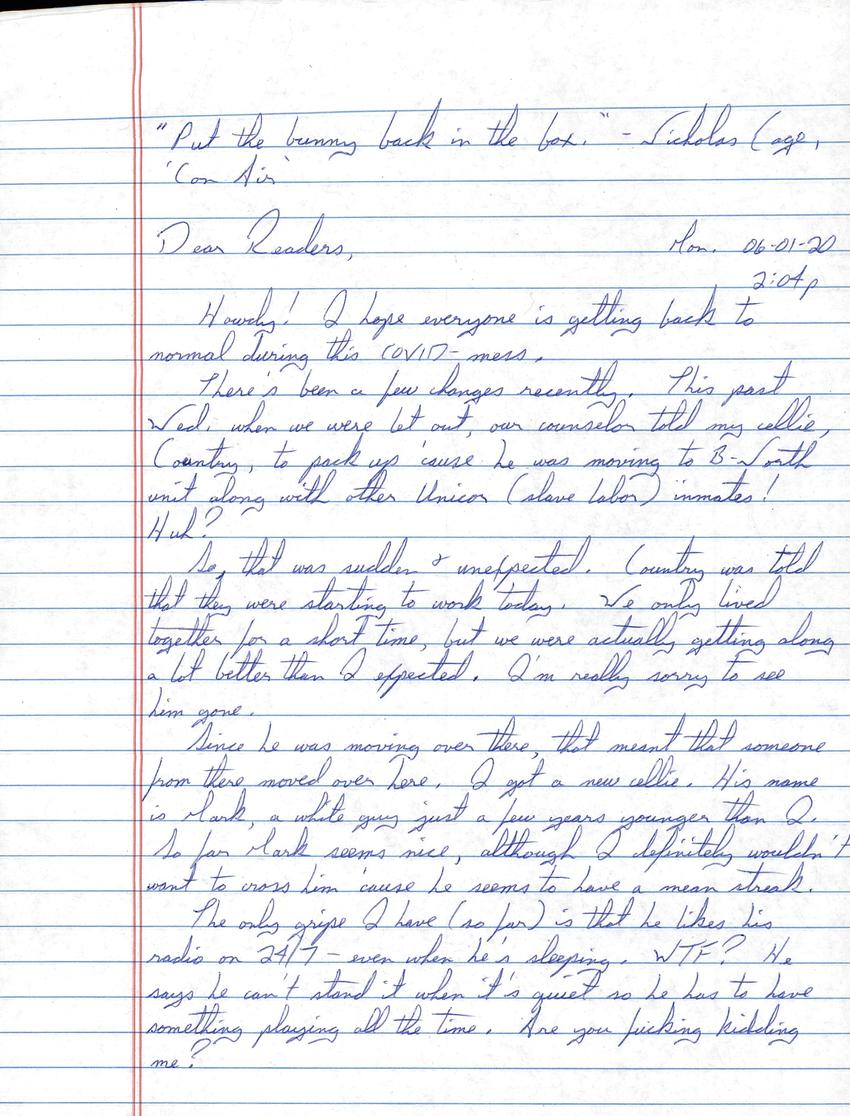 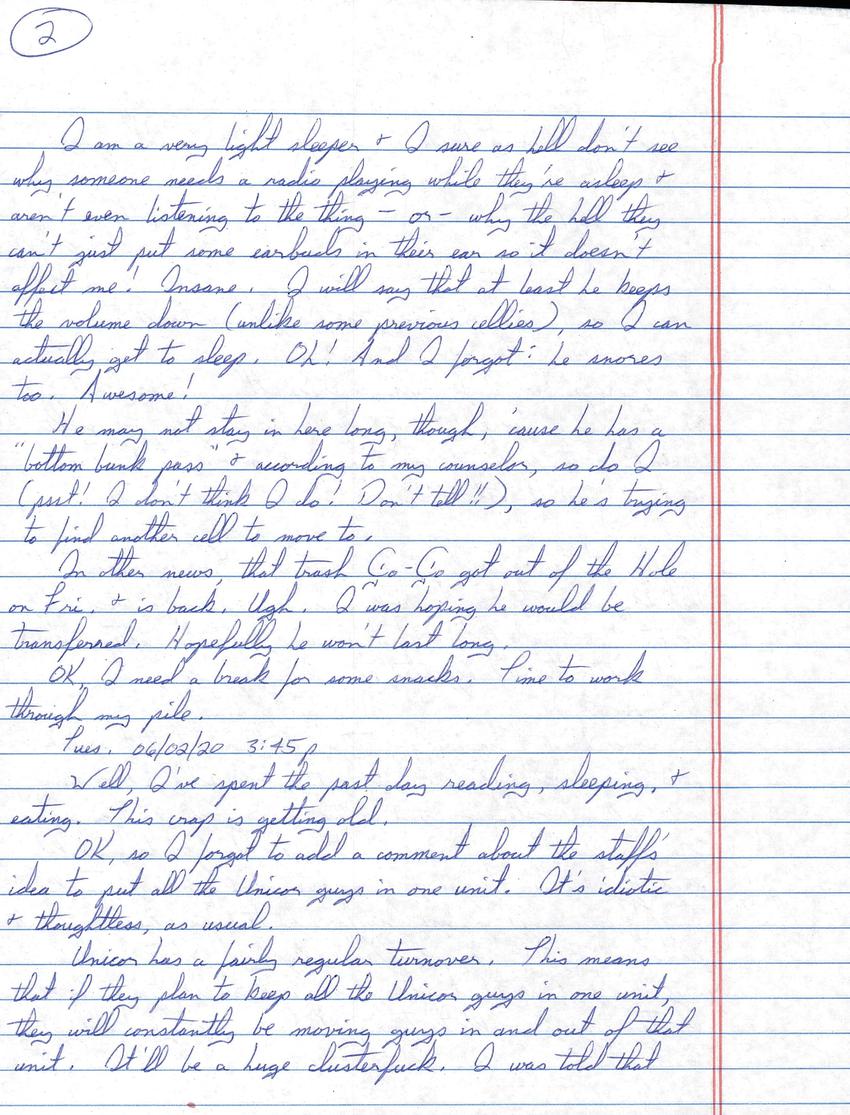 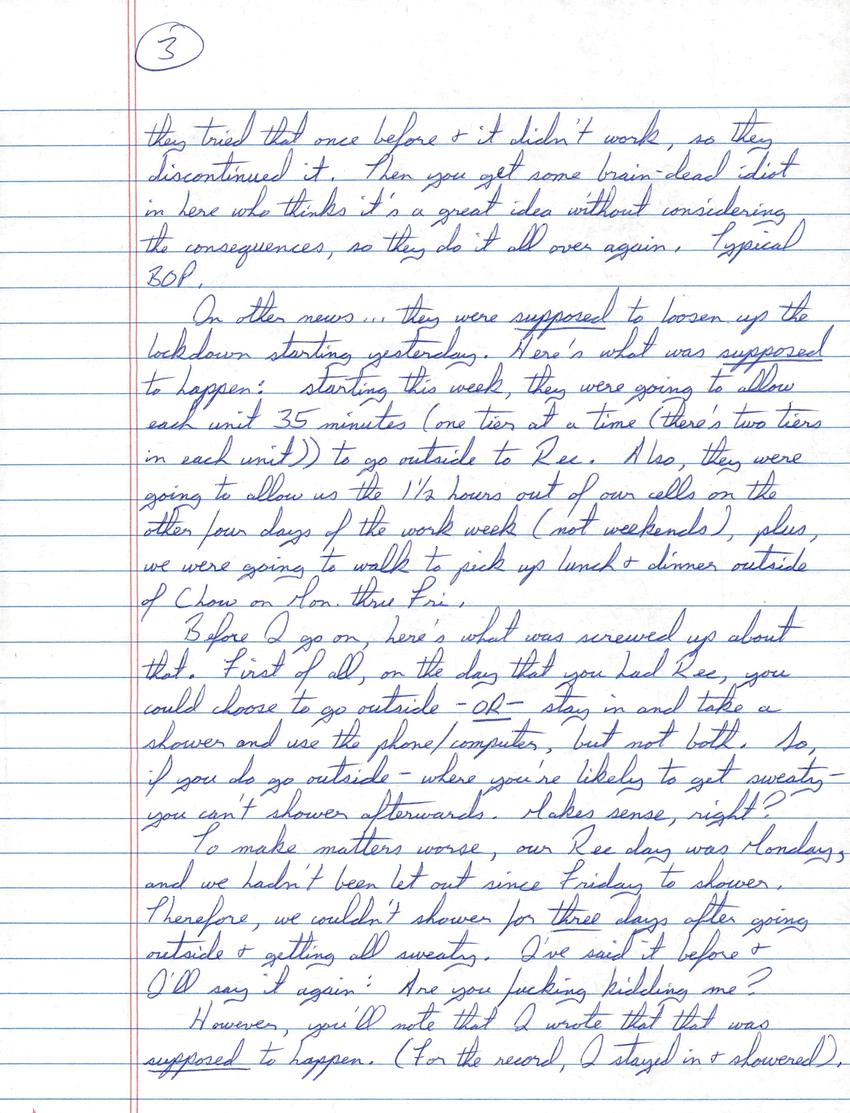 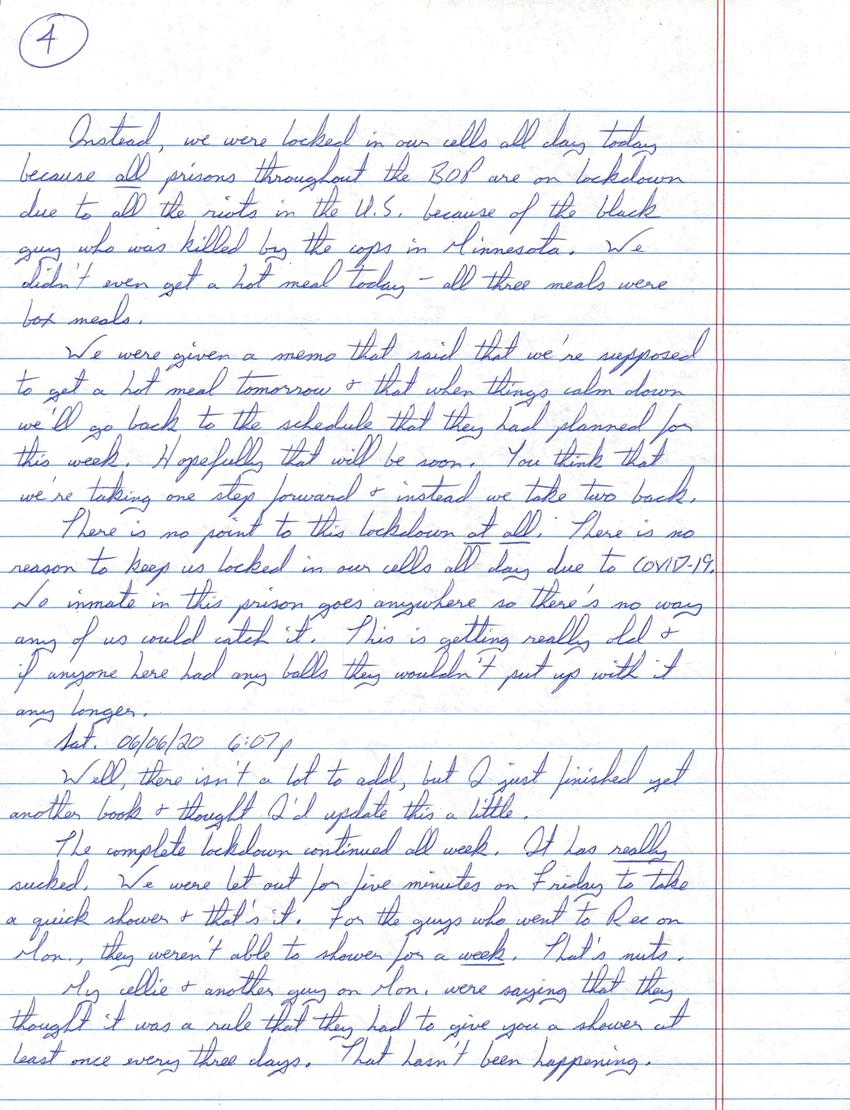 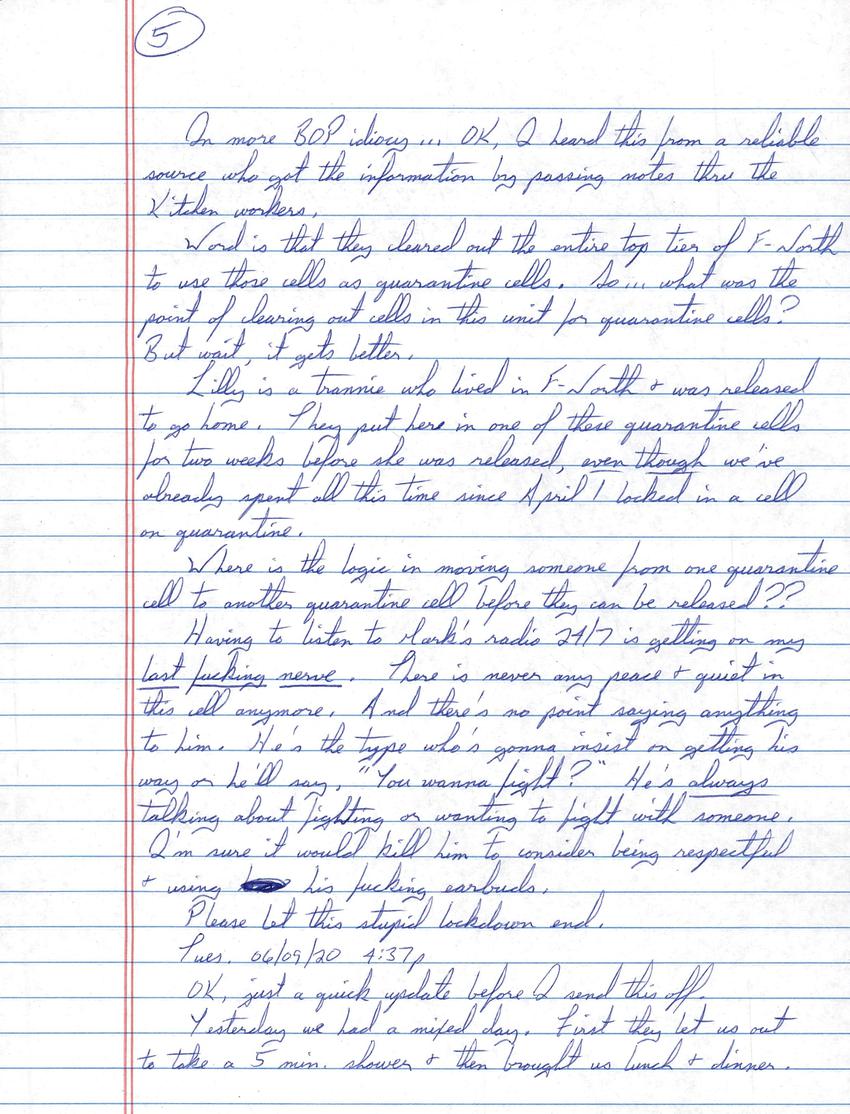 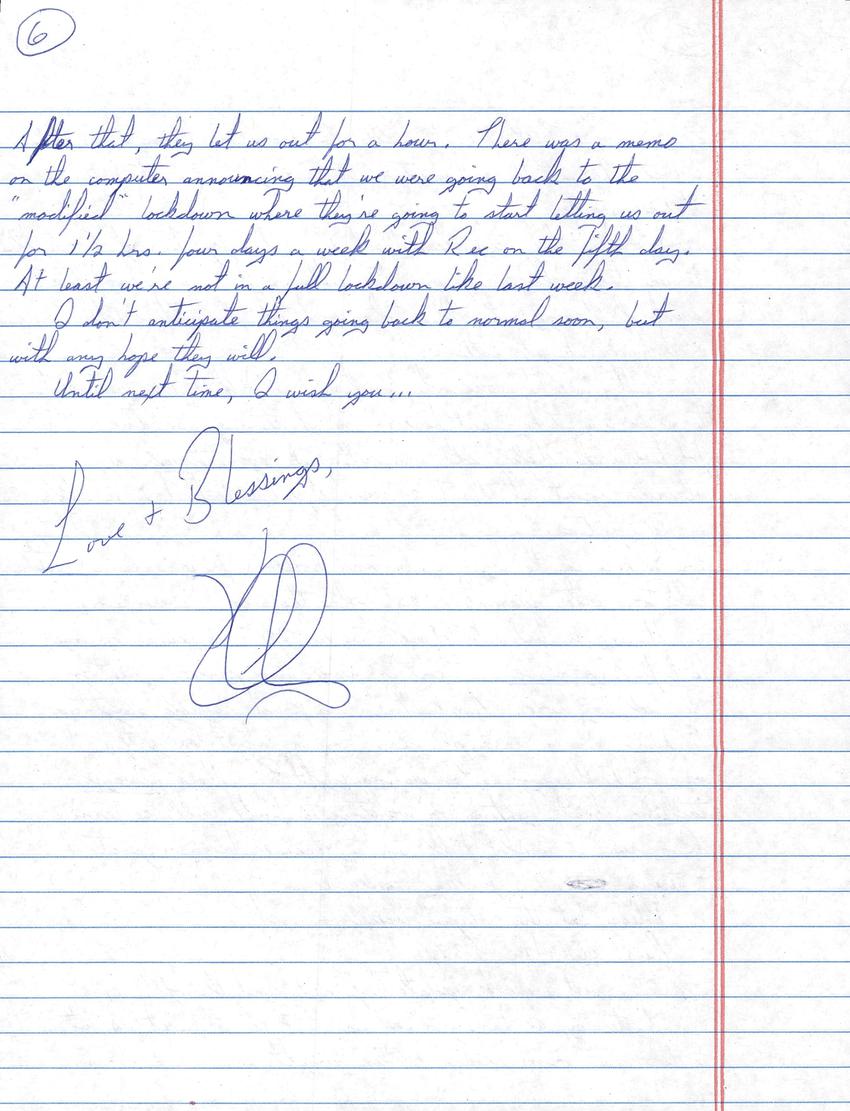 “Put the bunny back in the box,” -Nicholas Cage, ‘Con Air’

Howdy! I hope everyone is getting back to normal during this COVID-mess.
There’s been a few changes recently. This past Wed. When we were let out, our counselor told my cellie, Country, to pack ‘cause he was moving to B-North unit along with other Unicor (slave labor) inmates! Huh?
So, that was sudden and unexpected. Country was told that they were starting work today. We only lived together for a short time, but we were actually getting along a lot better than I expected. I’m really sorry to see him gone.
Since he was moving over there, that meant that someone from there moved over here. I got a new cellie. His name is Mark, a white guy just a few years younger than I. So far, Mark seems nice, although I definitely wouldn’t want to cross him ‘cause he seems to have a mean streak.
The only gripe I have (so far) is that he likes his radio on 24/7 –even when he’s sleeping. WTF? He says he can’t stand it when it’s quiet so he has to have something playing all the time. Are you fucking kidding me?
I am a very light sleeper, and I sure as hell don’t see why someone needs a radio playing while they’re asleep and aren’t even listening to the thing –or– why the hell they can’t just put some earbuds in their ear so it doesn’t affect me! Insane, I will say that at least he keeps the volume down (unlike some previous cellies), so I can actually get to sleep.Oh! And I forgot: he snores too. Awesome!
He may not stay here long, though, ‘cause he has a “bottom bunk pass” and according to my counselor, so do I (psst! I don’t think I do! Don’t tell!!), so he’s trying to find another cell to move to.
In other news, that trash Go-Go (?) got out of the Hole on Fri. and is back. Ugh. I was hoping he would be transferred. Hopefully he won’t last long.
OK, I need a break for some snacks. Time to work through my pile.

Tues. 06/02/20 3:45
Well, I've spent the past day reading, sleeping, + eating. The crap is getting old.
OK, so I forgot to add a comment about the staff's idea to put all the Unicon guys in one unit. It's idiotic + thoughtless, as usual.
Unicor has a fairly regular turnover. This means that if they plan to keep all the Unicor guys in one unit, they will constantly be moving guys in and out of that unit. It'll be a huge clusterfuck. I was told that they tried once before + it didn't work, so they discontinued it. Then you get some brain-dead idiot in here who thinks it's a great idea without considering the consequences, so they do it all over again. Typical BOP.
On other news... they were supposed to loosen up the lockdown starting yesterday. Here's what was supposed to happen: starting this week, they were going to allow each unit 35 minutes (one tier at a time (there's two tiers in each unit)) to go outside to Rec. Also, they were going to allow us the 1 1/2 hours out of our cells on the other four days of the work week (not weekends), plus, we were going to walk to pick up lunch + dinner outside of Chow on Mon. thru Fri.
Before I go on, here's what was screwed up about that. First of all, on the day that you had Rec, you could choose to go outside - OR - stay in and take a shower and use the phone/computer, but not both. So if you do go outside - where you're likely to get sweaty - you can't shower afterwards. Makes sense, right?
To make matters worse, our Rec day was Monday, and we hadn't been let out since Friday to shower.
Therefore, we couldn't shower for three days, after going outside + getting all sweaty. I've said it before + I'll say it again: Are you fucking kidding me?
However, you'll note that I wrote that was supposed to happen. (For the second, I stayed in + showered).
Instead, we were locked in our cells all day today because all prisons throughout the BOP are on lockdown due to all the riots in the U.S. because of the black guy who was killed by cops in Minnesota. We didn't even get a hot meal today - all three meals were box meals.
We were given a memo that said that we're supposed to get a hot meal tomorrow + that when things calm down we'll go back to the schedule that they had planned for this week. Hopefully that will be soon. You think that we're taking one step forward + instead we take two back.
There is no point to this lockdown at all. There is no reason to keep us locked in our cells all day due to COVID-19. No inmate in this prison goes anywhere so there's no way any of us could catch it. This is getting really old + if anyone here had any balls they wouldn't put up with it any longer.

Sat. 06/06/20 6:07p
Well, there isn't a lot to add, but I just finished yet another book + thought I'd update this a little.
The complete lockdown continued all week. It has really sucked. We were let out for five minutes on Friday to take a quick shower + that's it. For the guys who went to Rec on Mon., they weren't able to shower for a week. That's nuts.
My cellie + another guy on Mon. were saying that they thought it was a rule that they had to give a shower at least every three days. That hasn't been happening.
In more BOP idious... OK, I heard this from reliable source who got the information by passing notes thru the Kitchen workers.
Words is that they cleared out the entire top tire of F-North to use those cells as quarantine cells. So... what was the point of clearing out cells in this unit for quarantine cells? But wait, it gets better.
Lilly is a trannie who lived in F-North was released to go home. They put her in one of these quarantine cells for two weeks before she was released, even though we've already spent all this time since April 1 locked in a cell on quarantine.
Where is the logic in moving someone from one quarantine cell to another quarantine cell before they can be released??
Having to listen to Mark's radio 24/7 is getting on my last fucking nerve. There is never any peace + quiet in this cell anymore. And there's no point saying anything to him. He's the type who's gonna insist on getting his way or he'll say, "You wanna fight?" He's always talking about fighting or wanting to fight with someone. I'm sure it would kill him to consider being respectful + using his fucking earbuds.
Please let this stupid lockdown end.
Tues. 06/09/20 4:37p
OK, just a quick update before I send this off.
Yesterday we had a mixed day. First they let us out to take a 5 min. shower + then brought us lunch + dinner. After that, they let us out for a hour. There was a memo on the computer announcing that were going back to the "modified" lockdown where they're going to start letting us out for 1 1/2 hrs four days a week with Rec on the fifth day. At least we're not in a full lockdown like last week.
I don't anticipate things going back to normal soon, but with any hope they will.
Until next time, I wish you...

Thanks for writing! You letter was the first piece I’ve writing I’ve transcribed. I’m excited to start this journey, and I hope to transcribe for you in the future! Your comment about snacks gave me a laugh at my boring job taking temperatures at a nursing home.

Good to read your writing again. I am sorry that the authorities at your prison are not following basic guidelines for showers and rec, I'm gonna send them a letter to check in on that because that is simply not fair. What do you normally do during Rec? What have you been reading? Know that there are people on the outside who care about you and are actively trying to dismantle the prison industrial complex. I am sorry that your bunkmate hasn't gotten any less annoying, but even though I don't really know you I do know that you will persevere. For now, I hope you continue to stay safe and healthy, both mentally and physically. Till next time,
sona186 (06/17/20 12:07p)
Hi Kelly,
it's hurricane Julia, just wanted to say hello and keep your head up! Warm greetings
(scanned reply – view as blog post)
uploaded Aug. 5, 2020.  Original (PDF) 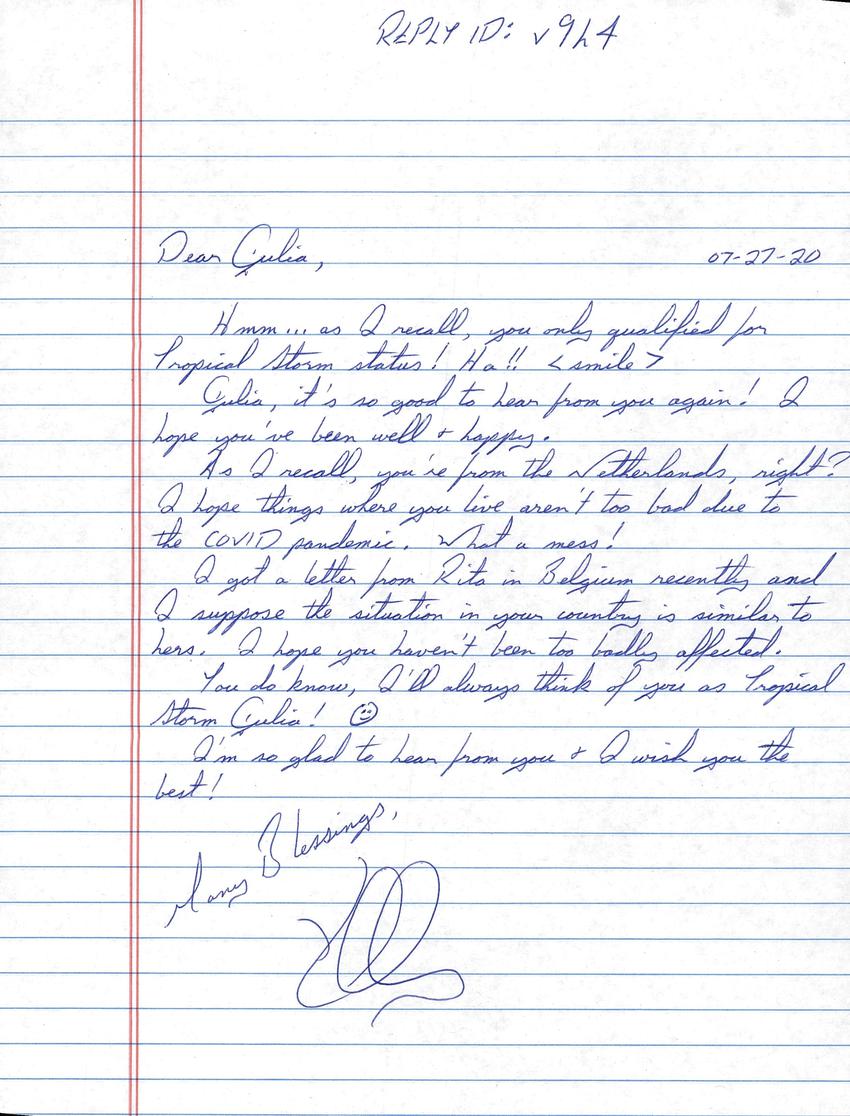 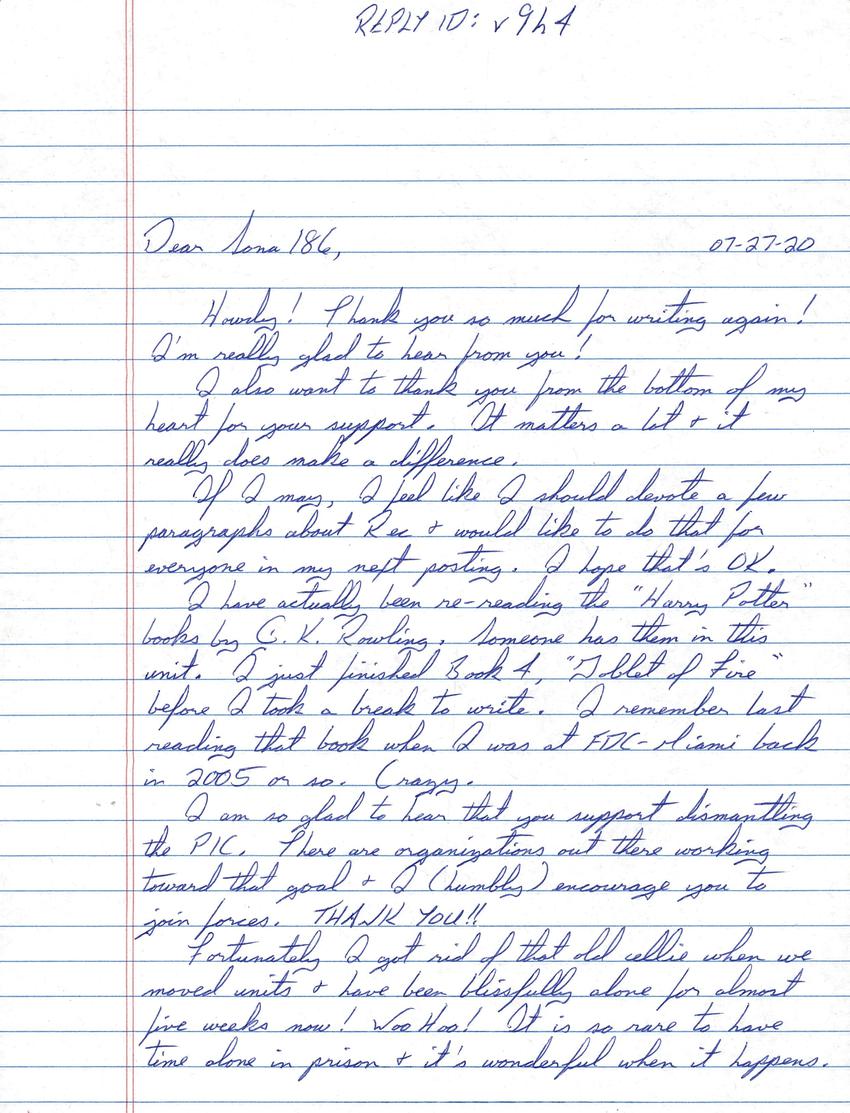 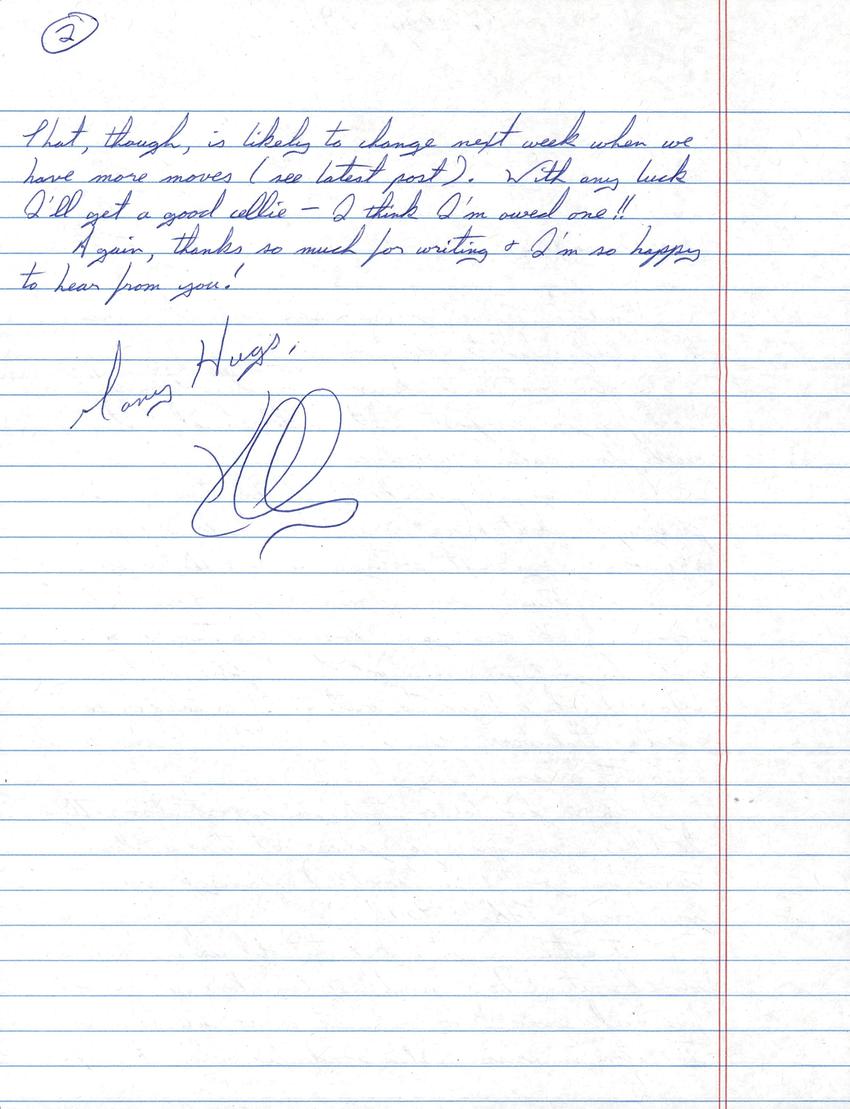 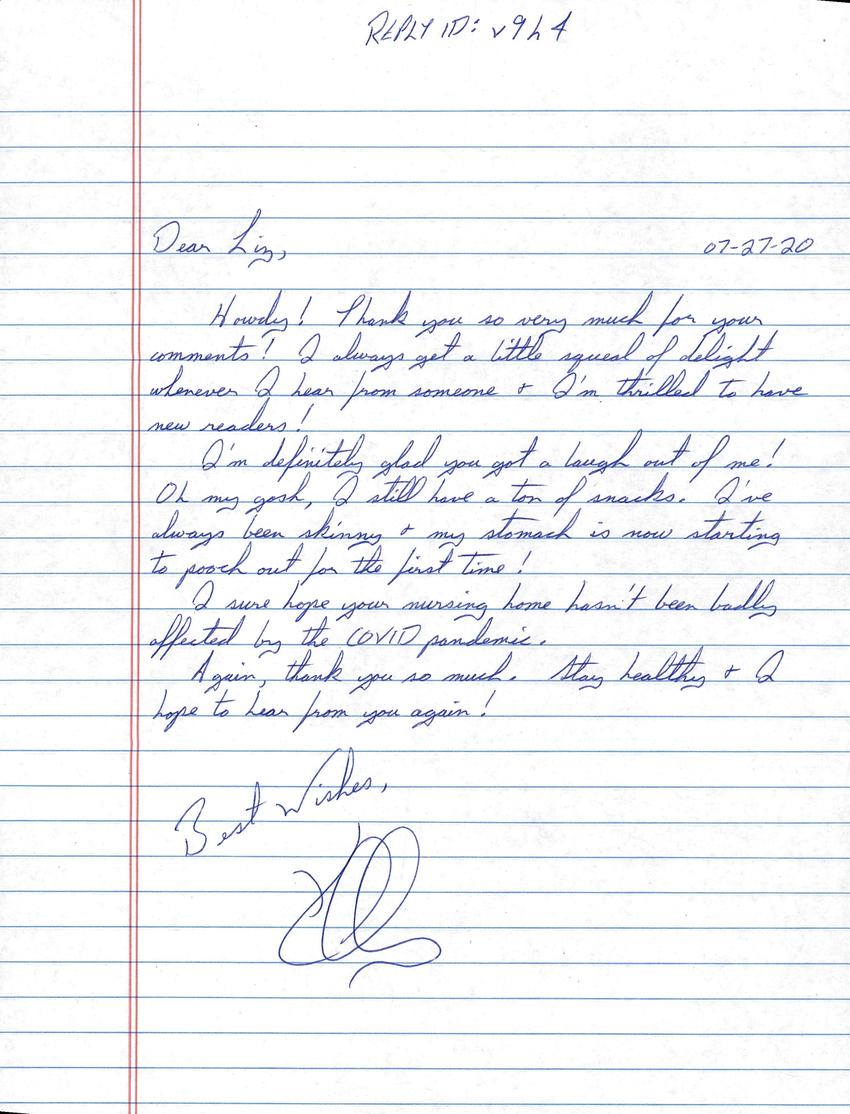 Hi Kelly,
oh my, not a hurricane but a tropical storm? I almost plunged into a whirlwind of identity crisis, but then I saw this headline: "2 tropical storms pose a potential double hurricane threat to U.S. Gulf Coast" and I guess not only gender is fluid. :)))
I am fine, the Netherlands has not the best COVID strategy but nobody can compete with the USA of course. It's really totally mind blowing what is going on.
Hope you are all right too,
warm greetings,
Julia
(scanned reply – view as blog post)
uploaded Sept. 26, 2020.  Original (PDF) 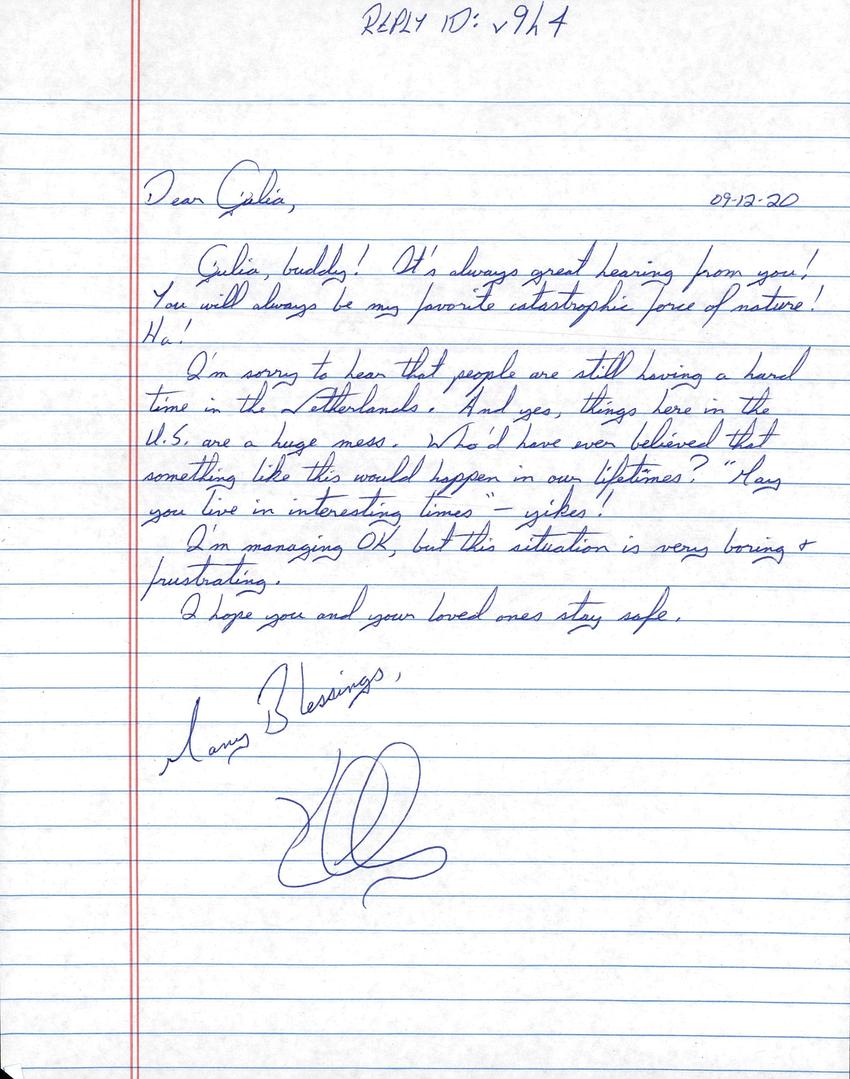 Dear Kelly,
your favorite catastrophic force of nature, oh my, you make me blush! Well, I guess those people who did have thought of this happening in our lifetimes are either virologists or depressed - seems one is actually more realistic when depressed, a friend who is a psychologist told me once.
You wrote that the situation is boring, makes me think of the satire article I read today, how tired people are of corona virus, and that they are looking forward to a new, fresh virus. Ouch. It's true that we really are used to a quicker news cycle than corona is giving us now, and not really an end in sight.
Apparently, our statistics are worse right now than USA, well, with what a small country can be great... But we recently got the strong advice to wear masks inside. Mind you, only advice, because "we all are adults in this country". Yes, right. Except, actually, no.
Anyways, not gonna bore you more with that, warm greetings, all the best, and stormy greetings, Julia