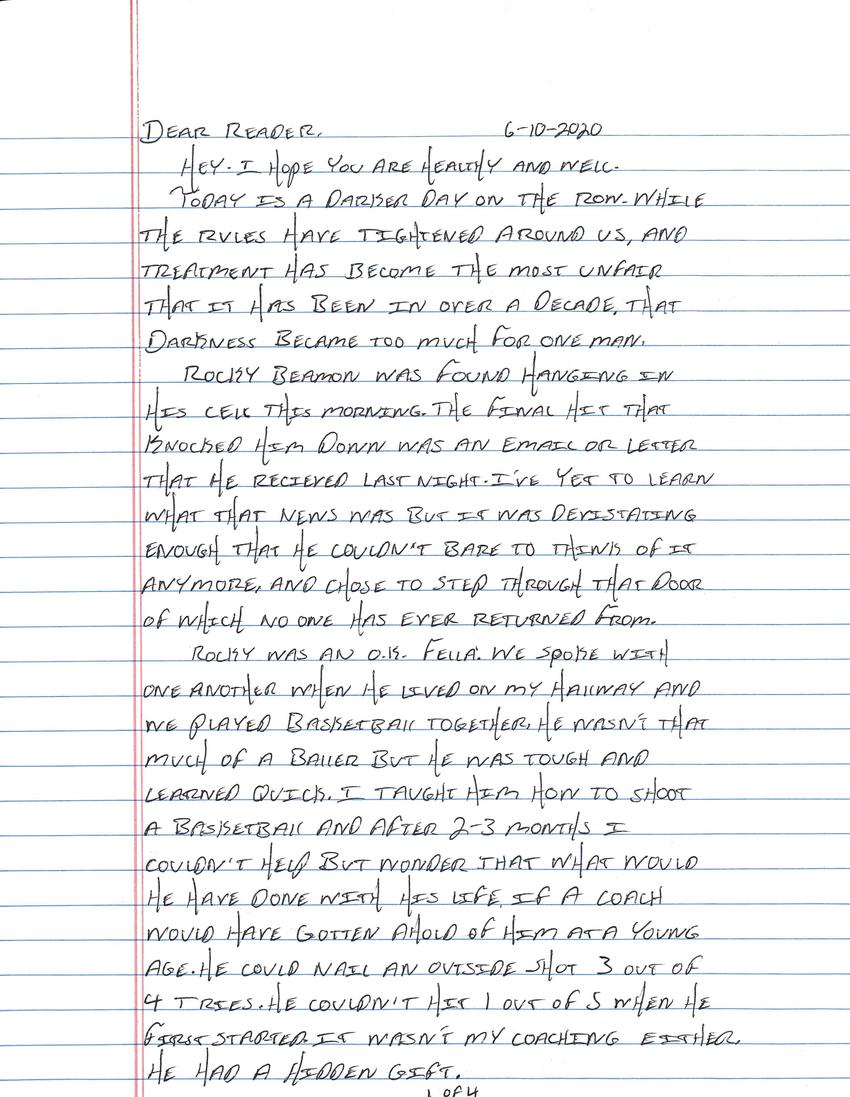 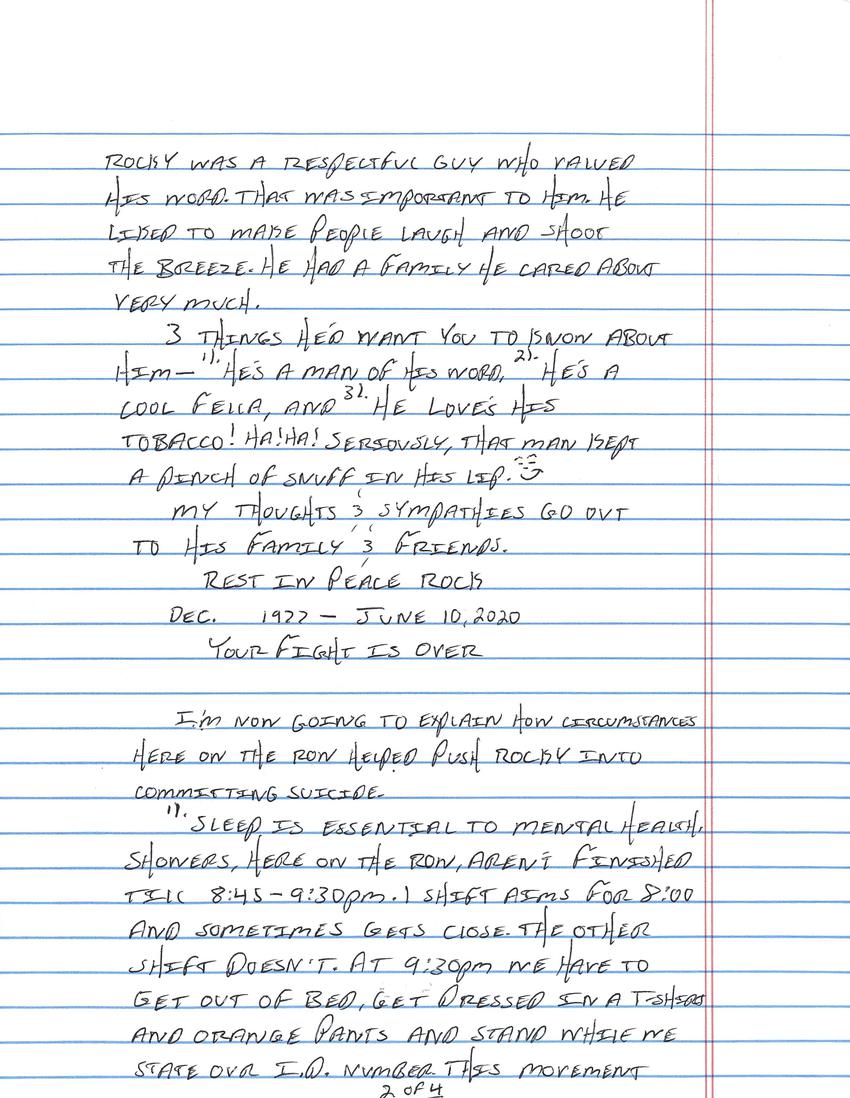 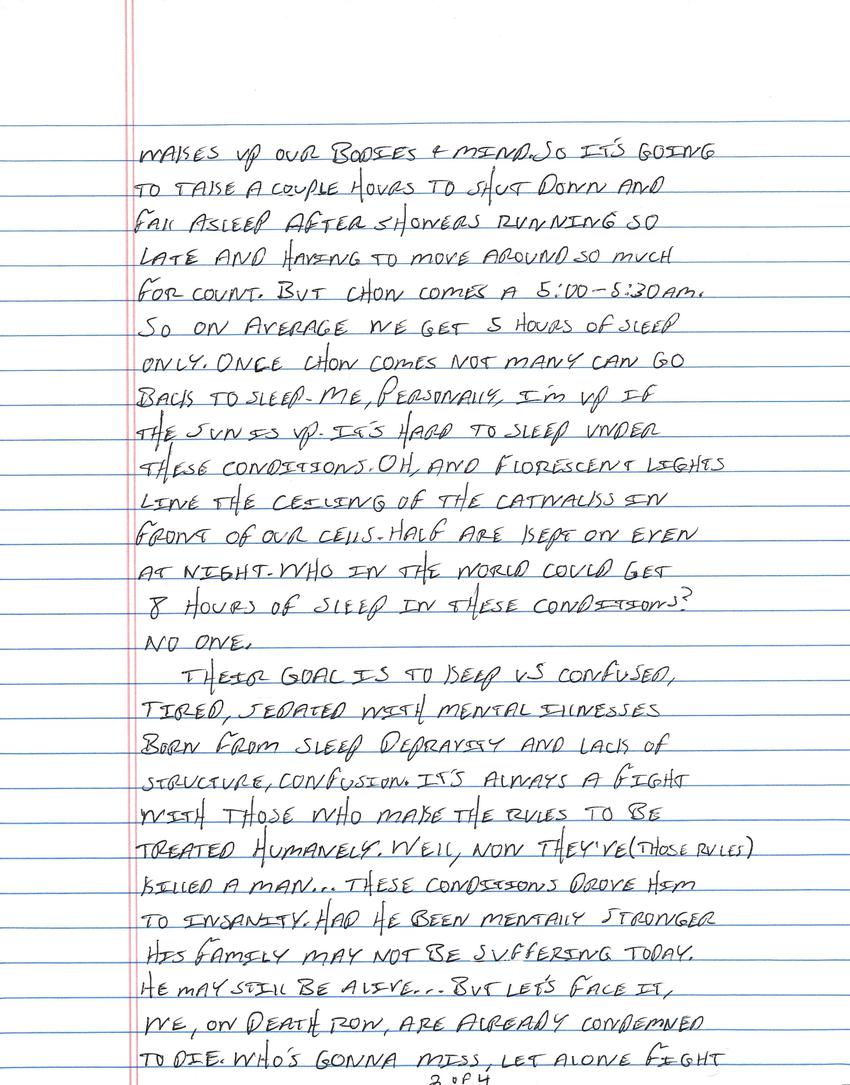 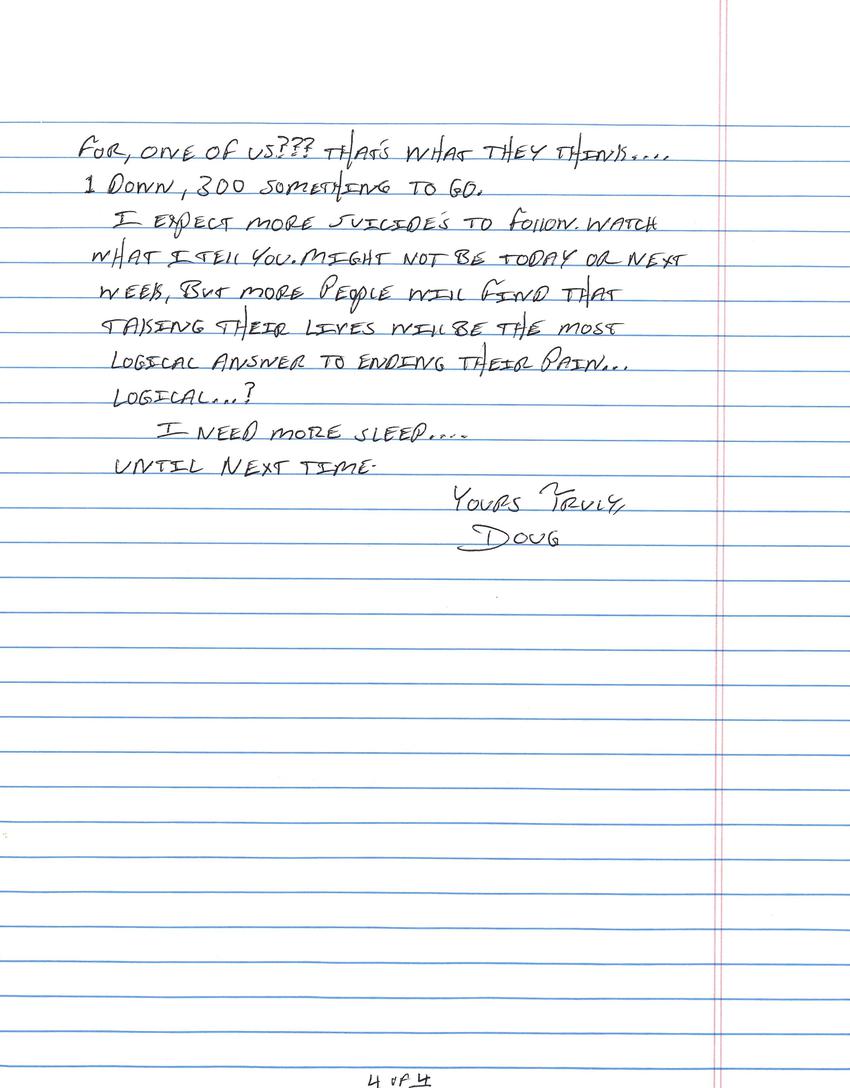 Dear Reader, 6-10-2020
Hey. I hope you are healthy and well. Today is a darker day on the row. While the rules have tightened around us, and treatment has become the most unfair that it has been in over a decade. That darkness became too much for one man. Rocky Beamon was found hanging in his cell this morning. The final hit that knocked him down was an email or letter that he received last night. I've yet to learn what that news was but it was devastating enough that he couldn't bare to think of it anymore, and chose to step through that door of which no one has ever returned from.

Rocky was an o.k. fella. We spoke with one another when he lived on my hallway and we played basketball together. He wasn't that much of a baller but he was tough and learned quick. I taught him how to shoot a basketball and after 2-3 months I couldn't help but wonder that what would he have done with his life if a coach would have gotten ahold of him at a young age. He could nail an outside shot 3 out of 4 tries. He couldn't hit 1 out of 5 when he first started. It wasn't my coaching either. He had a hidden gift. Rocky was a respectful guy who valued his word. That was important to him. He liked to make people laugh and shoot the breeze. He had a family he cared about very much.

1)Sleep is essential to mental health. Showers, here on the row aren't finished till 8:45 - 9:30pm. I shift aims for 8:00 and sometimes gets close. The other shift doesn't. At 9:30pm we have to get out of bed, get dressed in a t-shirt and orange pants and stand while we state our ID number. This movement wakes up our bodies & minds so it's going to take a couple hours to shut down and fall asleep after showers running so late and having to move around so much for count. But chow comes at 5:00-5:30am. So on average we get 5 hours of sleep only. once chow comes not many can go back to sleep. Me, personally, I'm up if the sun is up. It's hard to sleep under these conditions. Oh, and florescent lights line the ceiling of the catwalks in front of our cells. Half are kept on even at night. Who in the world could get 8 hours of sleep in these conditions? No one.

Their goal is to keep us confused, tired, sedated with mental illnesses born from sleep depravity and lack of structure, confusion. It's always a fight with those who make the rules to be treated humanely. Well, now they've (those rules)killed a man...These conditions drove him to insanity. Had he been mentally stronger, his family may not be suffering today. He may still be alive...but let's face it, we, on death row, are already condemned to die. Who's gonna miss, let alone fight for, one of us??? That's what they think...1 down, 300 something to go.

I expect more suicides to follow. Watch what I tell you. Might not be today or next week, but more people will find that taking their lives will be the most logical answer to ending their pain...logical...?

I need more sleep...until next time.