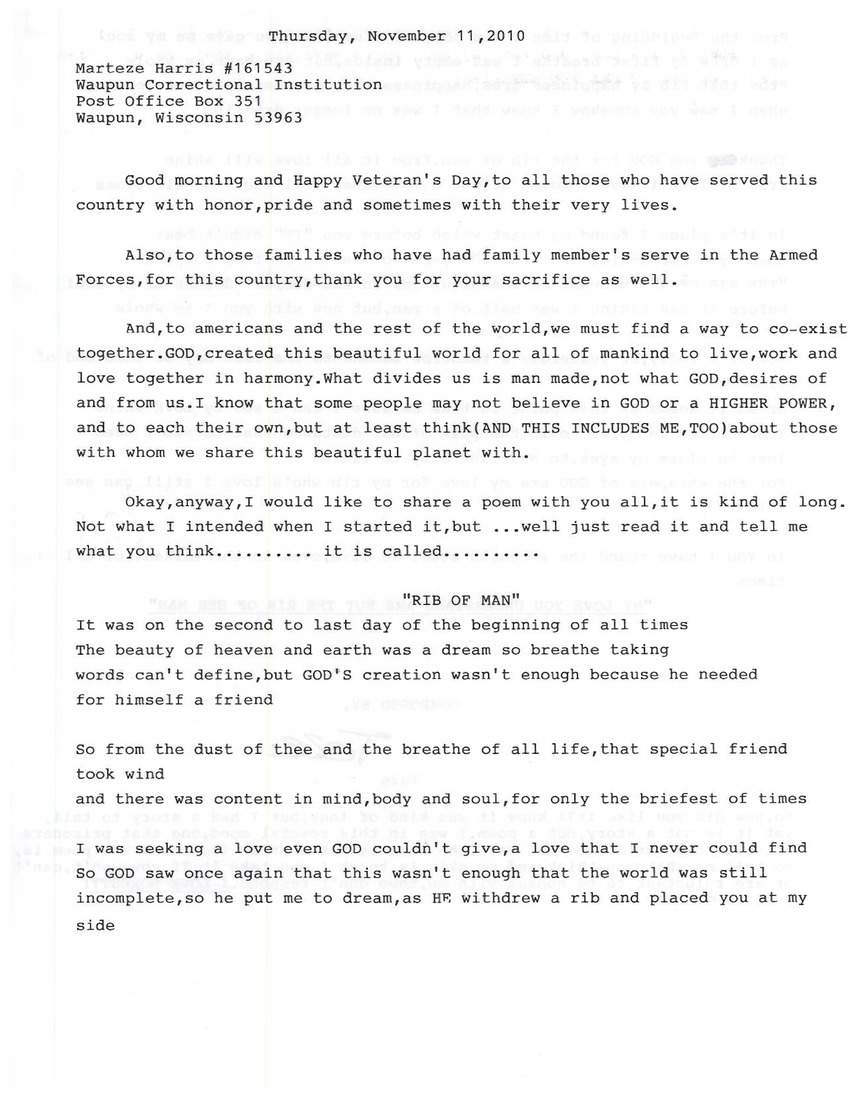 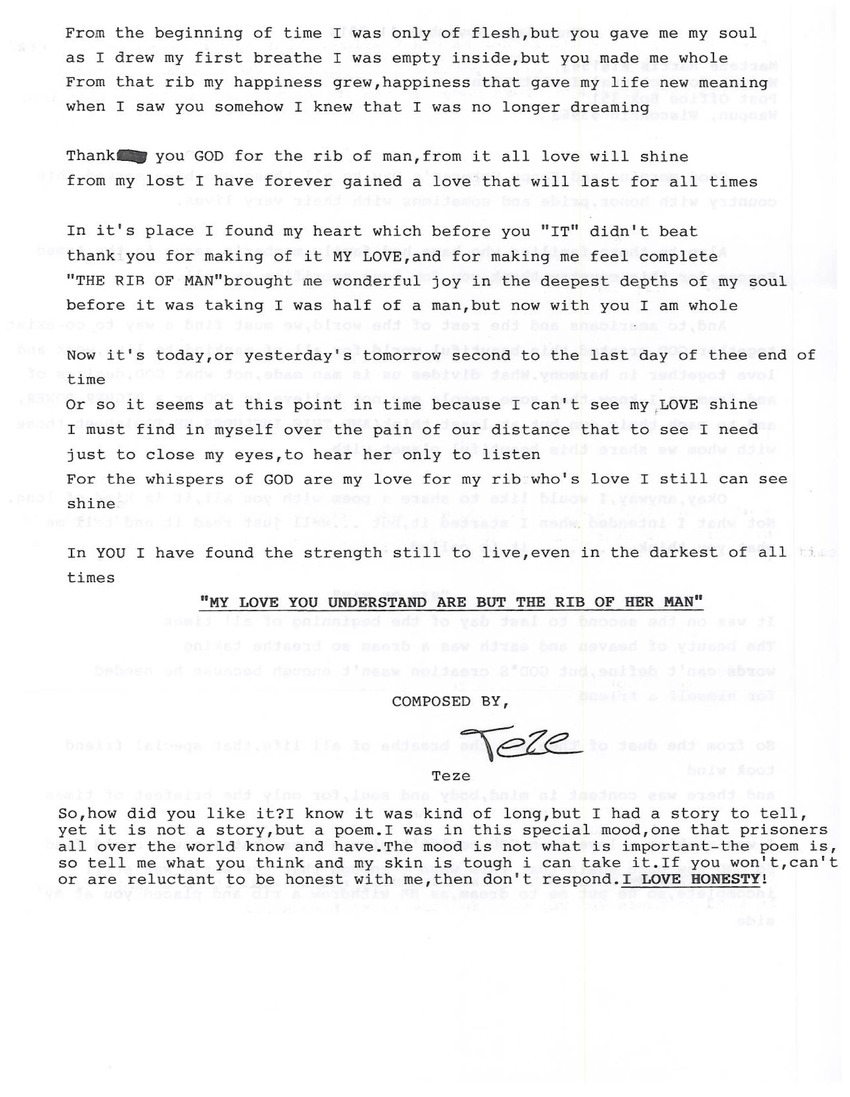 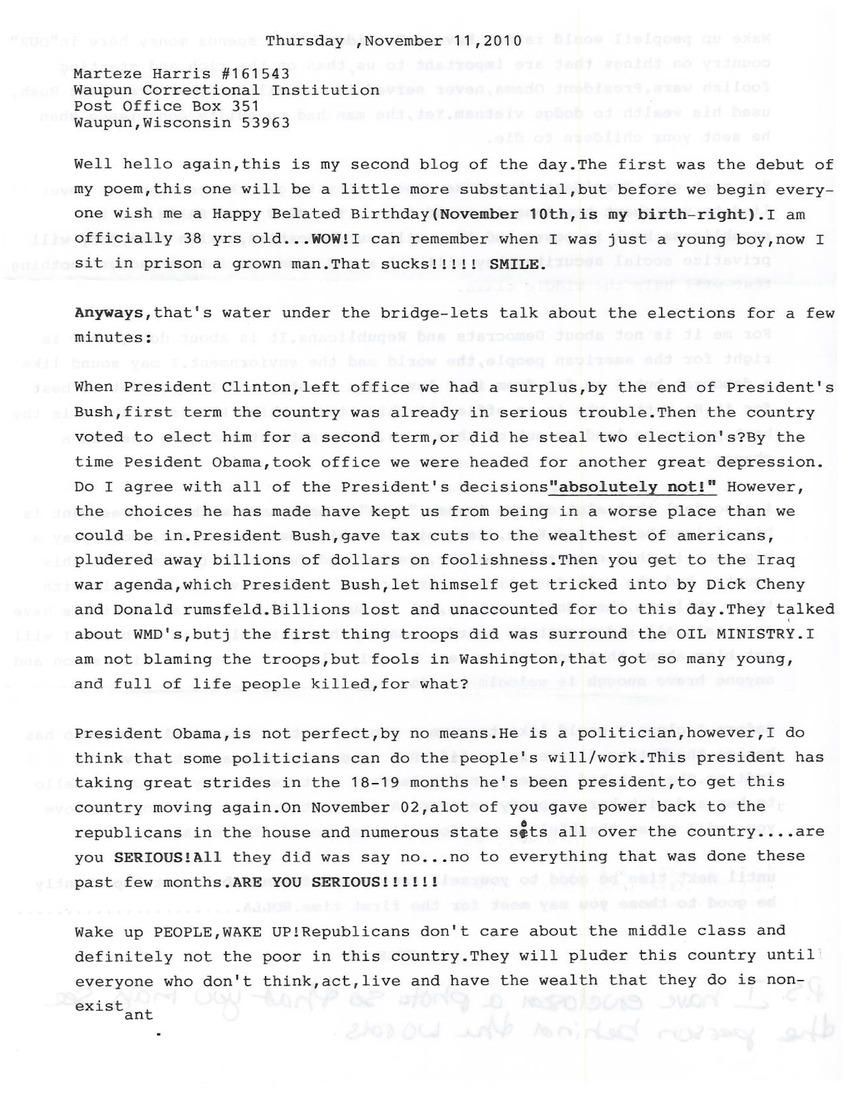 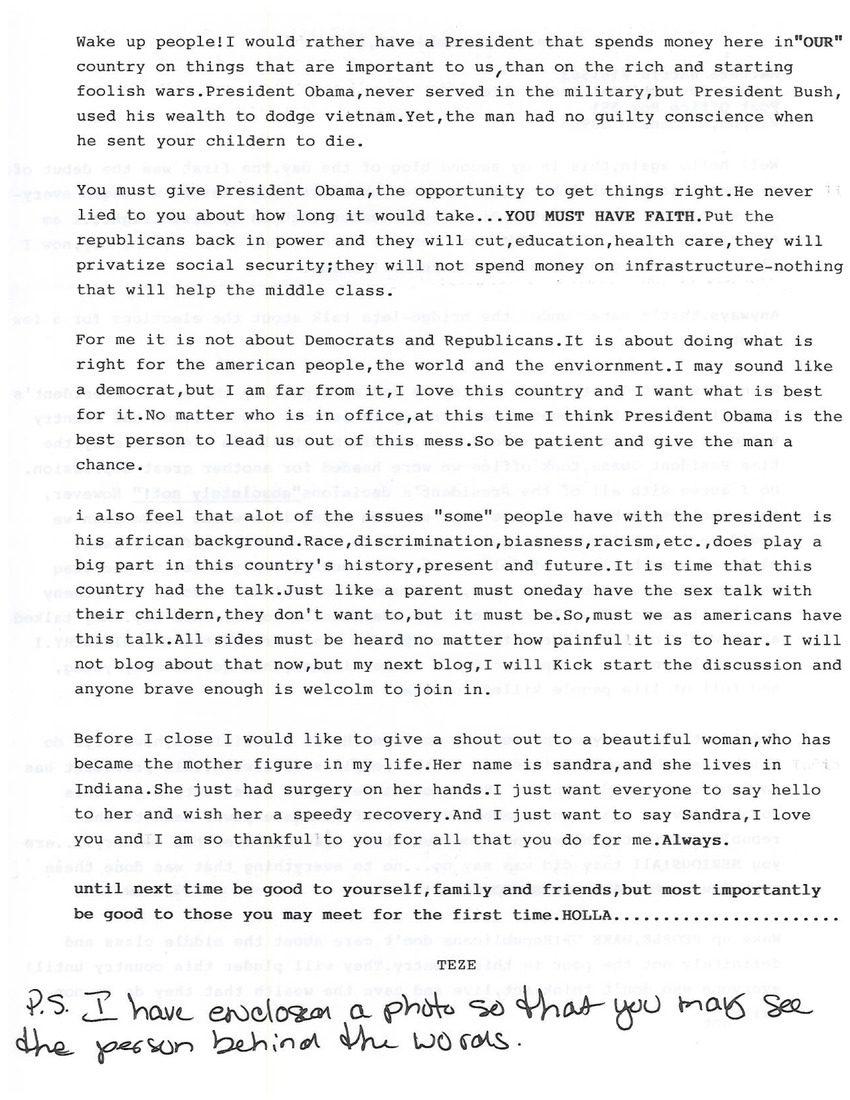 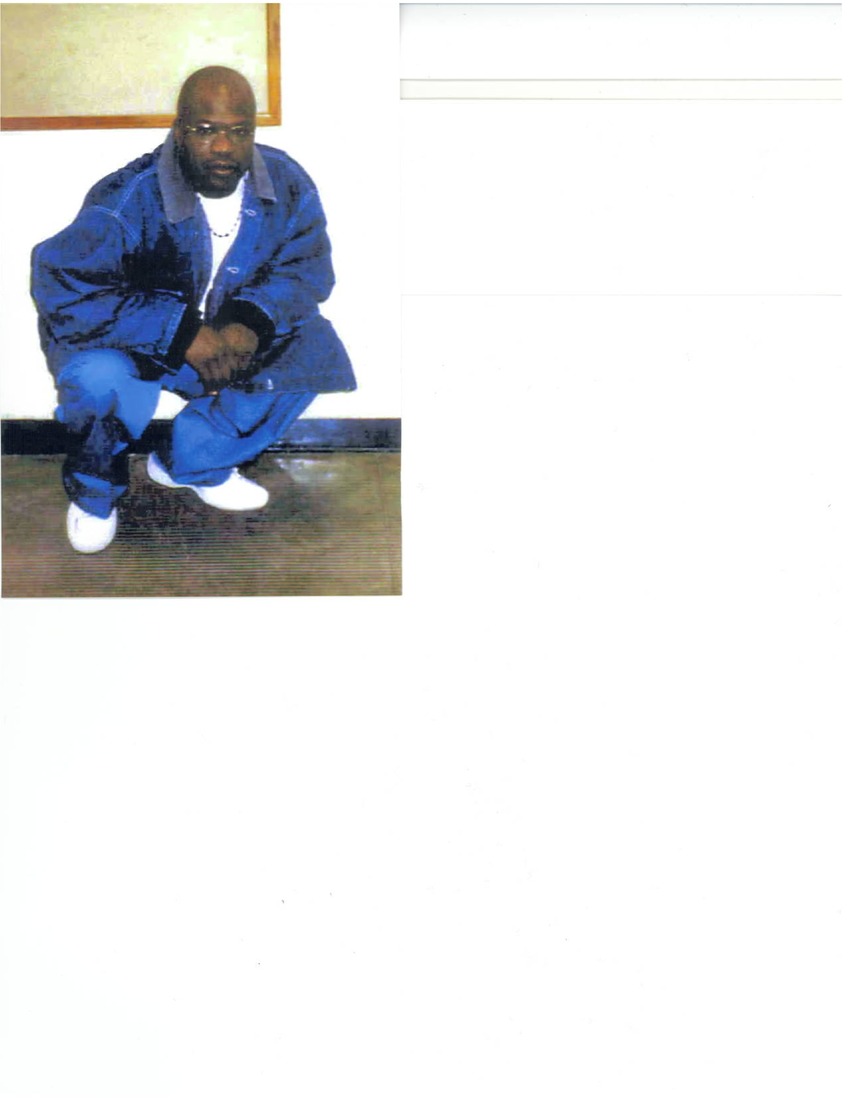 Good morning and Happy Veteran's Day to all those who have served this country with honor, pride and sometimes their lives.

Also, to those families who have had family member's serve in the Armed Forces, for this country, thank you for your sacrifice as well.

And, to Americans and the rest of the world, we must find a way to co-exist together. GOD, created this beautiful world for all of mankind to live, work and love together in harmony. What divides us is man made, not what GOD, desires of and from us. I know that some people may not believe in GOD or a HIGHER POWER, and to each their own, but at least think (AND THIS INCLUDES ME, TOO) about those with whom we share this beautiful planet with.

Okay, anyway, I would like to share a poem with you all, it is kind of long. Not what I intended when I started it, but... well just read it and tell me what you think... It is called:

It was on the second to last day of the beginning of all times
The beauty of heaven and earth was a dream so breathtaking words can't define, but GOD'S creation wasn't enough because he needed for himself a friend.

So from the dust of thee and the breath of all life, that special friend took wind and there was content in mind, body and soul, for only the briefest of times.

I was seeking a love even GOD couldn't give, a love that I never could find
So GOD saw once again that this wasn't enough that the world was still incomplete, so he put me to dream, as HE withdrew a rib and placed you at my side.

From the beginning of time I was only of flesh, but you gave me my soul as I drew my first breath I was empty inside, but you made me whole
From that rib my happiness grew, happiness that gave my life new meaning when I saw you somehow I knew that I was no longer dreaming.

Thank you GOD for the rib of man, from it all love will shine from my lost I have forever gained a love that will last for all time.

In its place I found my heart which before you "IT" didn't beat thank you for making of it MY LOVE, and for making me feel complete "THE RIB OF MAN" brought me wonderful joy in the deepest depths of my soul before it was taking I was half of a man, but now with you I am whole.

Now it's today, or yesterday's tomorrow second to the last day of thee end of time

Or so it seems at this point in time because I can't see my LOVE shine I must find in myself over the pain of our distance that to see I need just to close my eyes, to hear her only listen.
For the whispers of GOD are my love for my rib whose love I still can see shine.

In YOU I have found the strength still to live, even in the darkest of all times

"MY LOVE YOU UNDERSTAND ARE BUT THE RIB OF HER MAN"

So how did you like it? I know it was kind of long, but I had a story to tell, yet it is not a story, but a poem. I was in this special mood, one that prisoners all over the world know and have. The mood is not what is important – the poem is, so tell me what you think and my skin is tough I can take it. If you won't, can't or are reluctant to be honest with me, then don't respond. I LOVE HONESTY!

Well hello again, this is my second blog of the day. The first was the debut of my poem, this one will be a little more substantial, but before we begin everyone wish me a Happy Belated Birthday (November 10th is my birth-right). I am officially 38 years old... WOW! I can remember when I was just a young boy, now I sit in prison a grown man. That sucks!!! SMILE.

Anyways, that's water under the bridge – let's talk about the elections for a few minutes:

When President Clinton left office we had a surplus, by the end of President Bush's first term the country was already in serious trouble. Then the country voted to elect him for a second term, or did he steal two elections? By the time President Obama took office we were headed for another great depression. Do I agreed with all of the president's decisions "ABSOLUTELY NOT!" However, the choices he has made have kept us from being in a worse place than we could be in. President Bush gave tax cuts to the wealthiest of Americans, plundered away billion of dollars on foolishness. Then you get to the Iraq war agenda which President Bush let himself get tricked into by Dick Cheney and Donald Rumsfeld. Billions lost and unaccounted for to this day. They talked about WMDs, but the first thing troops did was surround the OIL MINISTRY. I am not blaming the troops, but fools in Washington, that got so many young and full of life people killed, for what?

President Obama is not perfect by any means. He is a politician, however, I do think that some politicians can do the people's will/work. This president has taken great strides in the 18-19 months he's been president to get this country moving again. On November 2, a lot of you gave power back to the republicans in the house and numerous state seats[?] all over the country... are you SERIOUS? All they did was say no... no to everything that was done these past few months. ARE YOU SERIOUS!!!

Wake up PEOPLE, WAKE UP! Republicans don't care about the middle class and definitely not the poor in this country. They will plunder this country until everyone who don't think, act, live and have the wealth that they do is nonexistant.

Wake up people! I would rather have a president that spends money here in "OUR" country on things that are important to us, than on the rich and starting foolish wars. President Obama never served in the military, but President Bush used his wealth to dodge Vietnam. Yet, the man had no guilty conscience when he sent your children to die.

You must give President Obama the opportunity to get things right. He never lied to you about how long it would take... YOU MUST HAVE FAITH. Put the republicans back in power and they will cut education, health care and they will privatize social security; they will not spend money on infrastructure – nothing that will help the poor or middle class.

For me it is not about democrats and republicans. It is about what is right for the American people, the world and the environment. I may sound like a democrat, but I am far from it, I love this country and I want what is best for it. No matter who is in office, at this time I think President Obama is the best person to lead us out of this mess. So be patient and give the man a chance.

I also feel that a lot of issues "some" people have with the president is his African background. Race, discrimination, bias, racism, etc., does play a big part in this country's history, present and future. It is time that this country had the talk. Just like a parent must one day have the sex talk with their children, they don't want to but it must be. So, must we as Americans have this talk. All sides must be heard no matter how painful it is to hear. I will not blog about that now, but in my next blog I will kick-start the discussion and anyone brave enough is welcome to join in.

Before I close I would like to give a shout out to a beautiful woman, who has become the mother-figure in my life. Her name is Sandra, and she lives in Indiana. She just had surgery on her hands. I just want everyone to say hello to her and wish her a speedy recovery. And I just want to say: Sandra, I love you and I am so thankful to you for all that you do for me. Always.

Until next time be good to yourself, family and friends, but most importantly be good to those you may meet for the first time. HOLLA...

P.S. I have enclosed a photo so that you may see the person behind the words.

I thought your poem was awesome! Interesting rhyme scheme, great subject. I really enjoyed reading it. I also am really glad you're following politics and sharing your thoughts with us.
Thanks for writing! I finished the transcription for your post.
(scanned reply – view as blog post)
uploaded June 26, 2012.  Original (PDF) 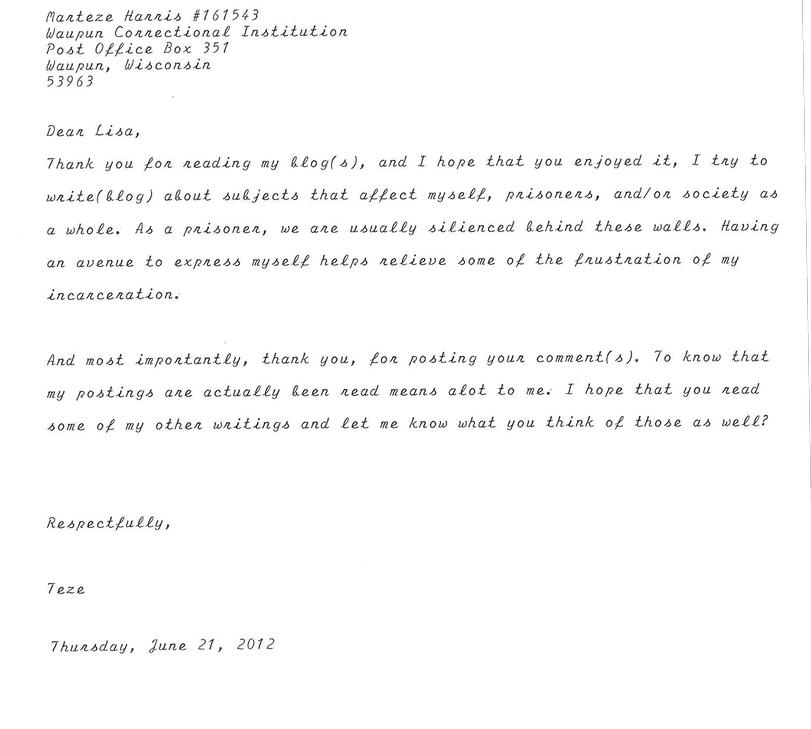