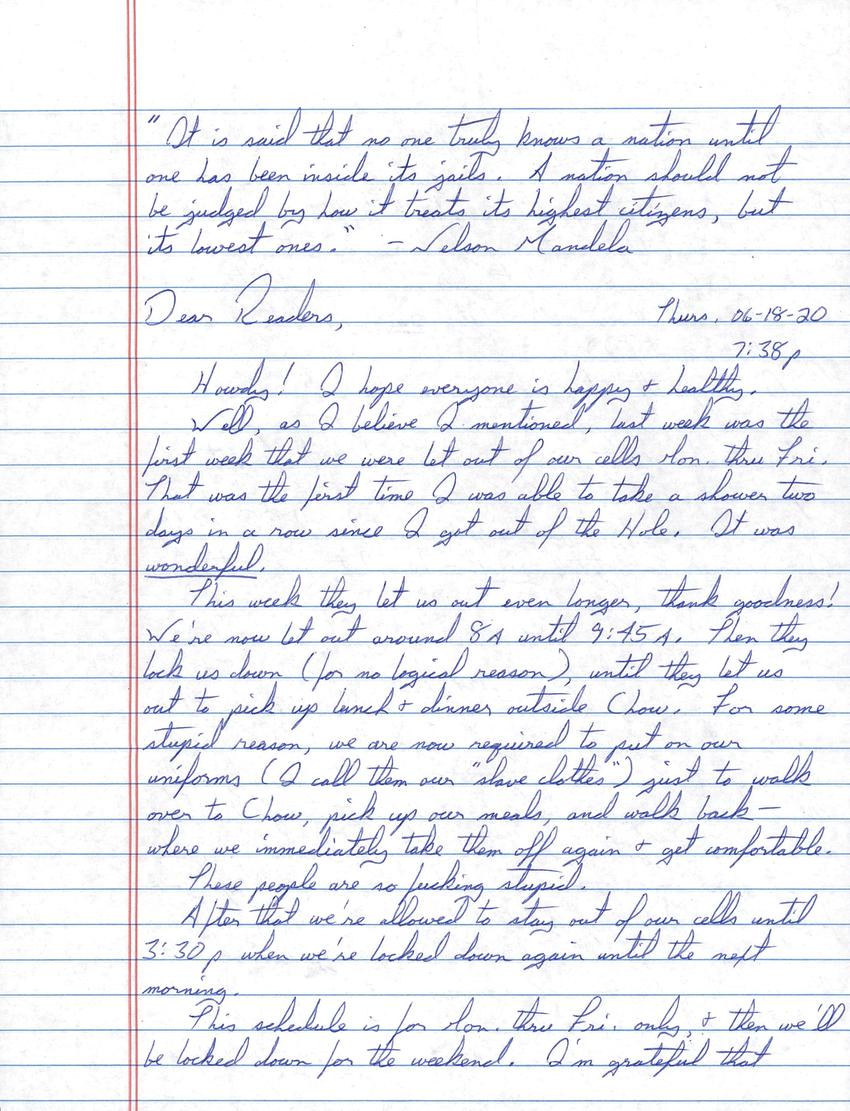 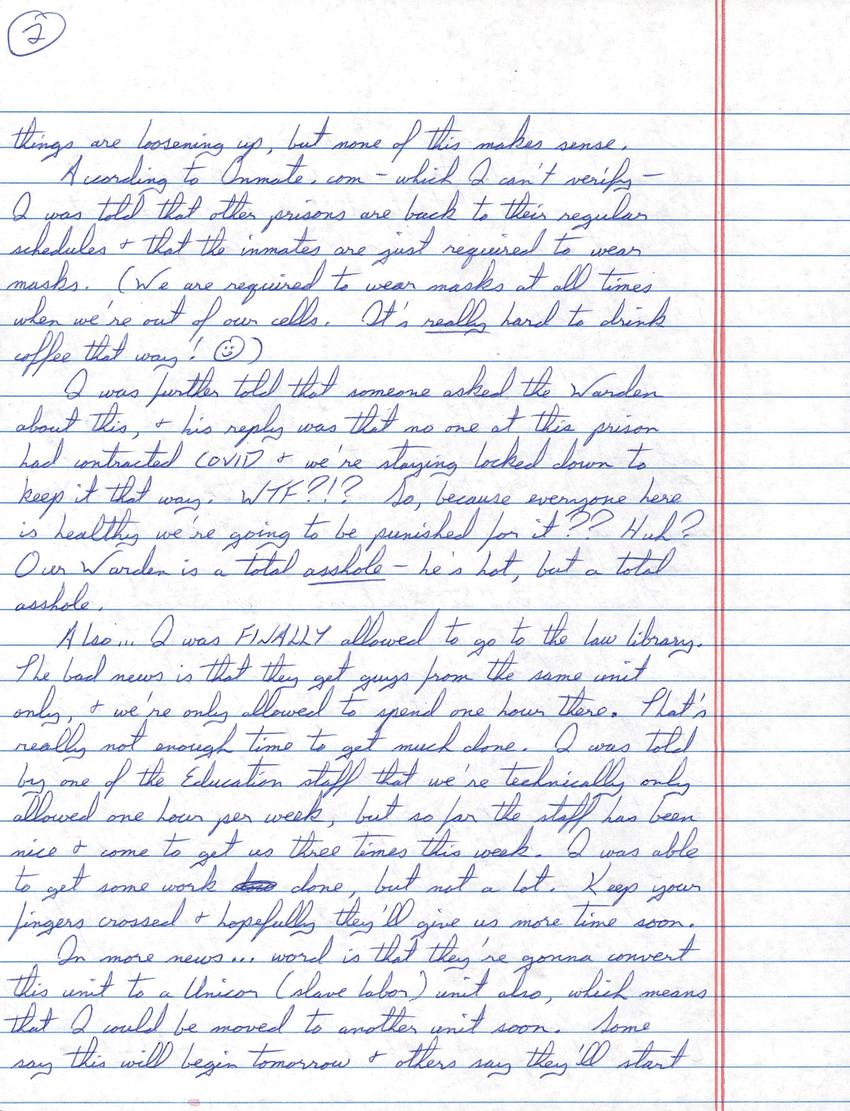 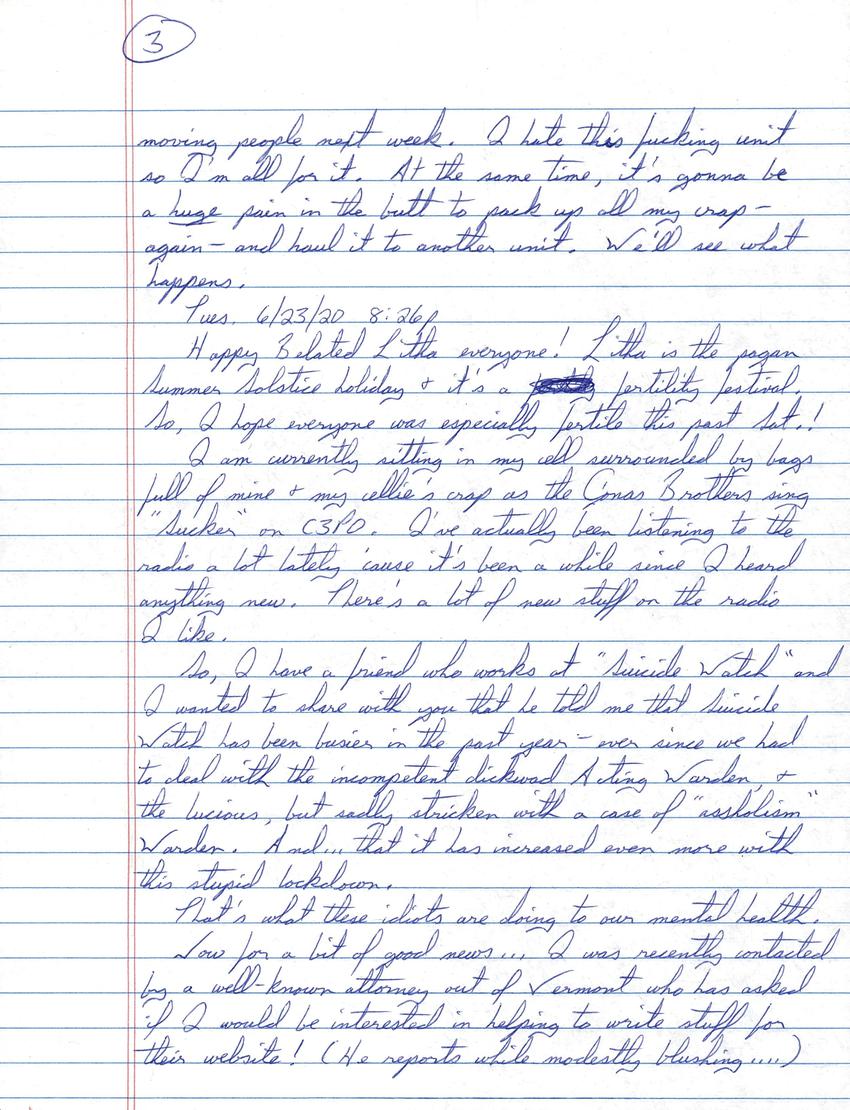 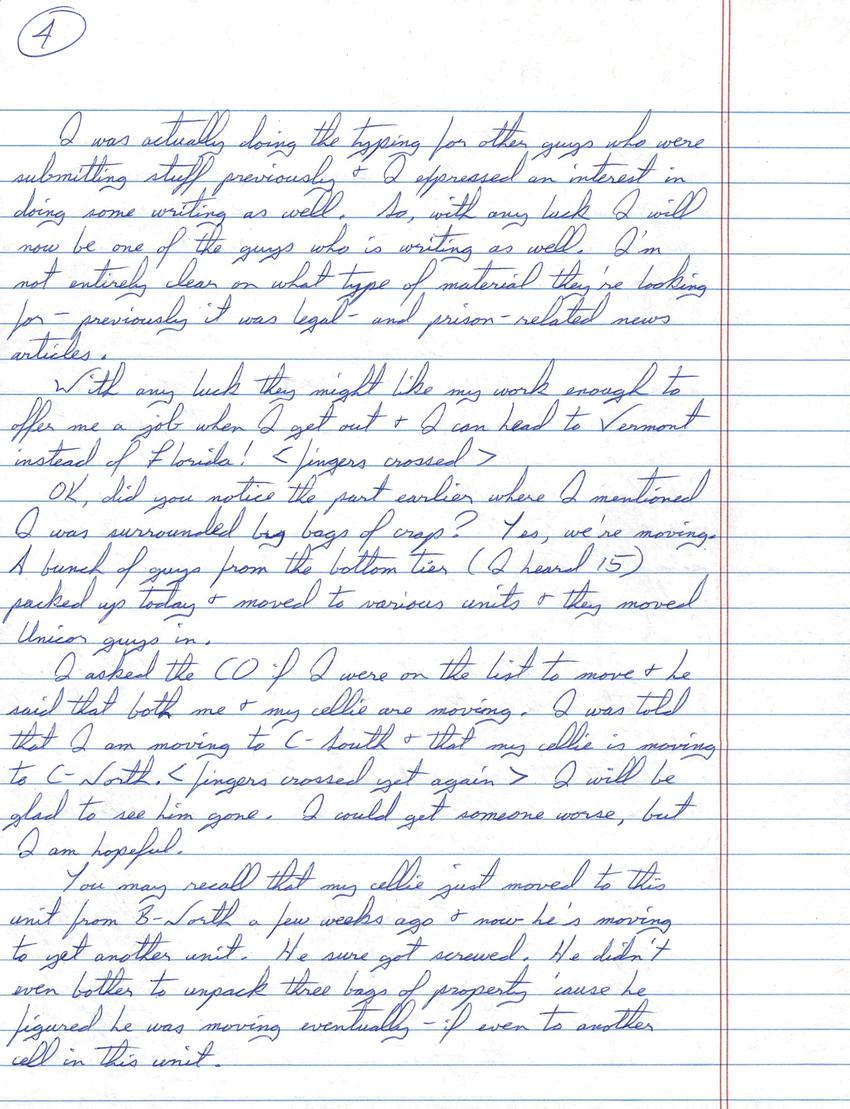 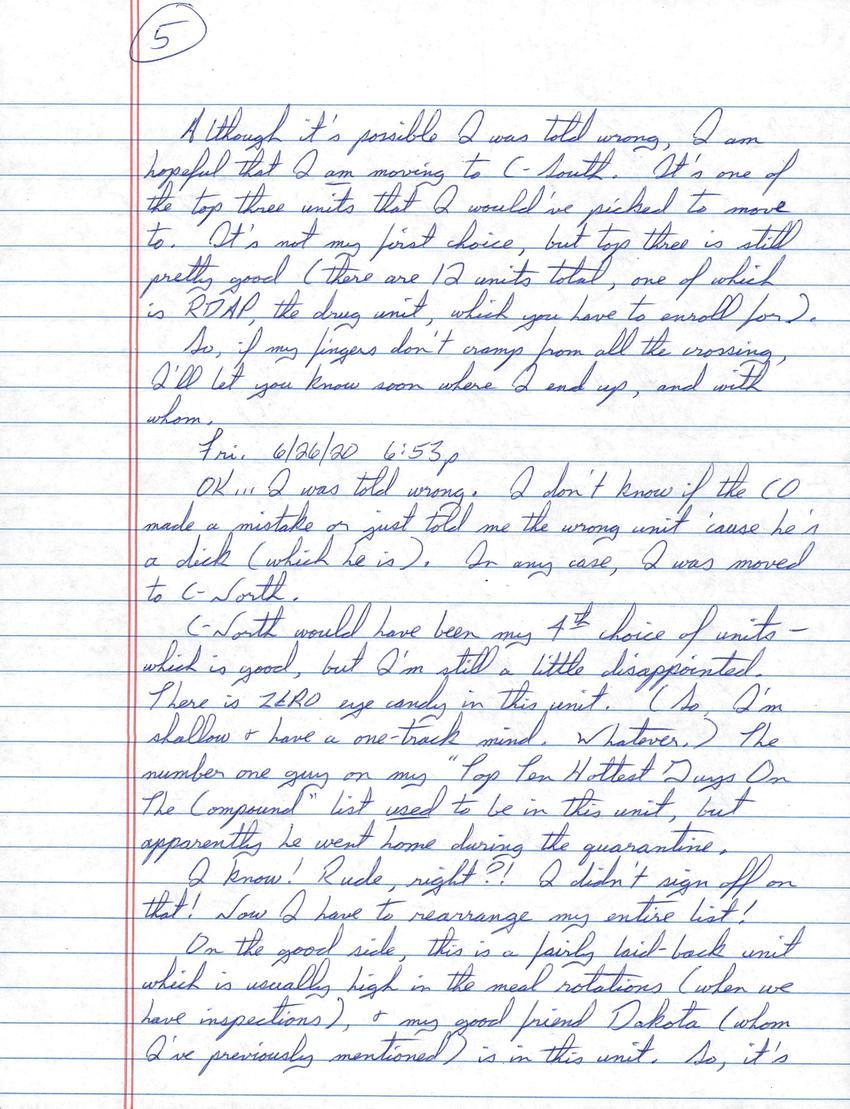 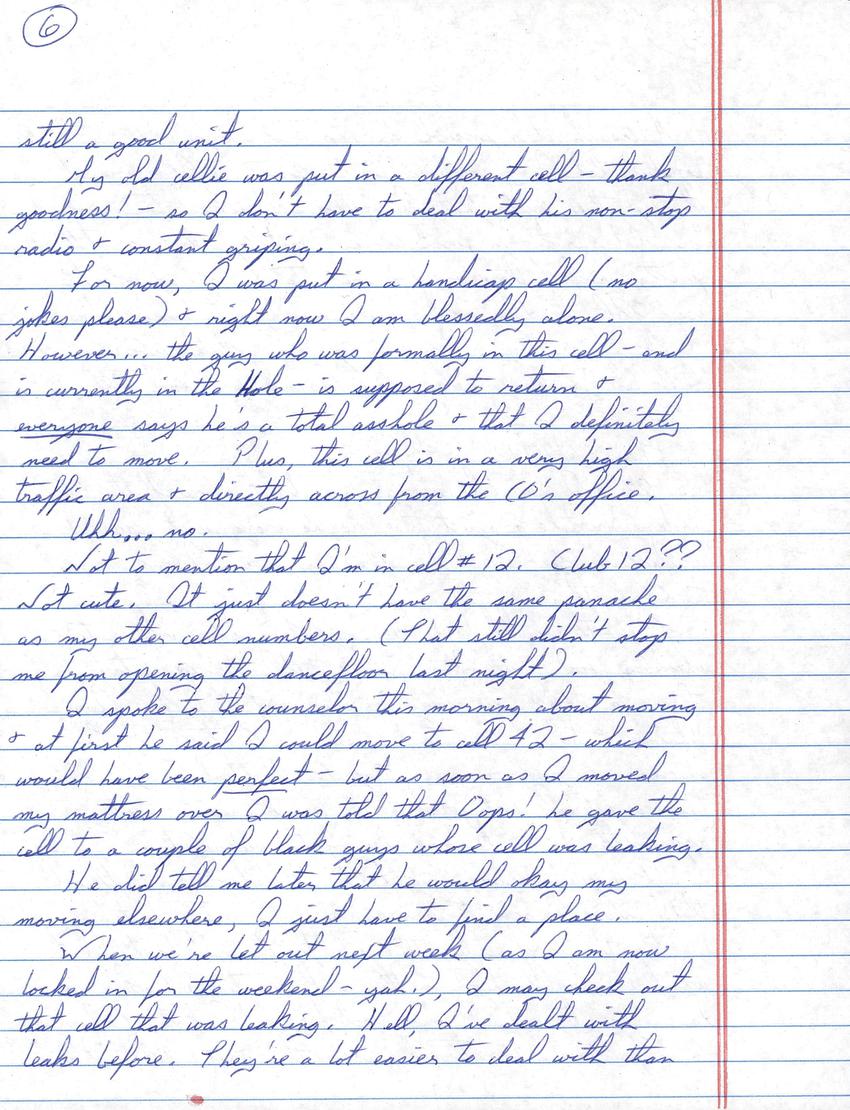 "It is said that no one truly knows a nation until one has been inside its jails. A nation should not be judged by how it treats its highest citizens, but its lowest ones." Nelson Mandela

Howdy! I hope everyone is happy & healthy. Well, as I believe I mentioned, last week was the first week that we are let out of our cells Monday through Friday. That was the first time I was able to take a shower two days in a row since I got out of the Hole. It was WONDERFUL.

This week they let us out even longer, thank goodness! We're now let out around 8:00 AM until 9:45 AM. Then they lock us down (for no logical reason) until they let us out to pick up lunch and dinner outside Chow. For some stupid reason, we are now required to put on our uniforms (I call them our "slave clothes") just to walk over to Chow, pick up our meals and walk back where we immediately take them off again and get comfortable.

These people are so fucking stupid.

After that we're allowed to stay out of our cells until 3:30 PM when we're locked down again until the next morning.

This schedule is for Monday through Friday only and then we'll be locked down for the weekend. I'm grateful that things are loosening up, but none of this makes sense.

According to Inmate.com - which I can't verify - I was told that other prisons are back to their regular schedules and that the inmates are just required to wear masks. (We are required to wear masks at all times when we're out of our cells. It's REALLY hard to drink coffee that way! :) smiley face

I was further told that someone asked the Warden about this and his reply was that no one at this prison had contracted COVID and we're staying locked down to keep it that way. WTF?!? So, because everyone here is healthy, we're going to be punished for it?? Huh? Our Warden is a total ASSHOLE - he's hot, but a total asshole.

Also, I was FINALLY allowed to go to the law library. The bad news is that they get guys from the same unit only and we're only allowed to spend one hour there. That's really not enough time to get much done. I was told by one of the Education staff that we're technically only allowed one hour per week, but so far the staff has been nice and came to get us three times this week. I was able to get some work done, but not a lot. Keep your fingers crossed and hopefully they'll give us more time soon.

In more news...word is that they're gonna convert this unit to a Unicom (slave labor) unit also which means that I could be moved to another unit soon. Some say this will begin tomorrow and others say they'll start moving people next week. I hate this fucking unit so I'm all for it. At the same time, it's gonna be a huge pain in the butt to pack up all of my crap - again - and haul it to another unit. We'll see what happens.

Happy belated Litha everyone! Litha is the pagan Summer Solstice holiday and it's fertility festival. So, I hope everyone was especially fertile this past Saturday!

I am currently sitting in my cell surrounded by bags full of mine and my cellie's crap as the Jonas Brothers sing "Sucker: on C3PO. I've actually been listening to the radio a lot lately cause it's been a while since I heard anything new. There's a lot of new stuff on the radio I like.

So, I have a friend who works at "Suicide Watch" and I wanted to share with you that he told me that Suicide Watch has been busier in the past year - ever since we had to deal with the incompetent dick-wad Acting Warden and the luscious, but sadly stricken with a case of "assholism" Warden. And...that it has increased even more with this stupid lock down.

That's what these idiots are dong to our mental health.

Now for a bit of good news...I was recently contacted by a well-known attorney out of Vermont who has asked if I would be interested in helping to write stuff for their website! (He reports while modestly blushing...)

I was actually doing this typing for other guys who were submitting stuff previously and I expressed an interest in doing some writing as well. So, with any luck, I will now be one of the guys who is writing as well. I'm not entirely clear on what type of material they're looking for - previously it was legal - and prison-related news articles.

With any luck they might like my work enough to offer me a job when I get out and I can head to Vermont instead of Florida! (fingers crossed)

OK, did you notice the part earlier where I mentioned I was surrounded by bags of crap? Yes, we're moving. A bunch of guys from the bottom tier (I heard 15) packed up today and moved to various units and they moved Unicor guys in.

I asked the CO if I were on the list to move and he said that both me and my cellie are moving. I was told that I am moving to C-South and that my cellie is moving to C-North (fingers crossed yet again). I will be glad to see him gone. I could get someone worse, but I am hopeful.

You may recall that my cellie just moved to this unit from B-North a few weeks ago and now he's moving to yet another unit. He sure got screwed. He didn't even bother to unpack three bags of property 'cause he figured he was moving eventually - if even to another cell in this unit.

Although it's possible I was told wrong, I am hopeful that I am moving to C-South. It's one of the top three units that I would've picked to move to. It's not my first choice, but top three is still pretty good (there are 12 units total, one of which is RDAP, the drug unit, which you have to enroll for). So, if my fingers don't cramp from all the crossing, I'll let you know soon where I end up, and with whom.

Ok...I was told wrong. I don't know if the CO made a mistake or just told me the wrong unit 'cause he's a dick (which he is). In any case, I was moved to C-North.

C-North would have been my 4th choice of units - which is good, but I'm still a little disappointed. This is ZERO eye candy in this unit. (So, I'm shallow and have a one-track mind. Whatever.) The number one guy on my "Top Ten Hottest Guys On The Compound" list USED to be in this unit, but apparently he went home during the quarantine. I know! Rude, right?! I didn't sign off on that! Now I have to rearrange my entire list!

On the good side, this is a fairly laid-back unit which is usually high in the meal rotations (when we have inspections) and my good friend, Dakota, (whom I've previously mentioned) is in this unit. So, it's still a good unit.

My old cellie was put in different cell - thank goodness! - so I don't have to deal with his non-stop radio and constant griping.

For now, I was put in a handicap cell (no jokes please) and right now I am blessedly alone. However...the guy who was formally in this cell - and is currently in the Hole - is supposed to return and EVERYONE says he's a total asshole and that I definitely need to move. Plus, this cell is in a very high traffic area and directly across from the CO's office.

Not to mention that I'm in cell #12. Club 12?? Not cute. It just doesn't have the same panache as my other cell numbers. (That still didn't stop me from opening the dance floor last night).

I spoke to the counselor this morning about moving and at first he said I could move to cell 42 - which would have been PERFECT - but as soon as I moved my mattress over, I was told that Oops! he gave the cell to a couple of black guys whose cell was leaking. He did tell me later that he would okay my moving elsewhere, I just have to find a place.

When we're let out next week (as I am now locked in for the weekend - yah), I may check out that cell that was leaking. Hell, I've dealt with leaks before. They're a lot easier to deal with than assholes.

It's always a little awkward moving to a new place and I'm trying to find my place. I did have one minor problem yesterday.

I set my chair out in the common area to watch TV. I was sitting closer to one of the "white" tables (of which there are only two - out of a total of about 11 (one is Hispanic)).

Anyway, the black guys at the table on my other side didn't like the fact that I was sitting there, even though there was plenty of space between me and their table. I really wasn't close to them or in their space at all. In fact, another white guy usually sits there and he places his chair closer to their table than I did.

I didn't even realize that there was a problem, but apparently these "people" kept giving the skank-eye to another white guy they know and he pulled me up to let me know what was going on.

In the end I ended up telling the white guy, "fuck those dudes" and I stayed right where I was. In fact, I stayed longer than I normally would have.

Thanks for writing! I finished the transcription for your post. I enjoyed reading your daily logs on our blog. You are a GREAT writer and wish you luck w/ your new writing job!! I hope he works out for you now and when you get out!!
(scanned reply – view as blog post)
uploaded Aug. 16, 2020.  Original (PDF) 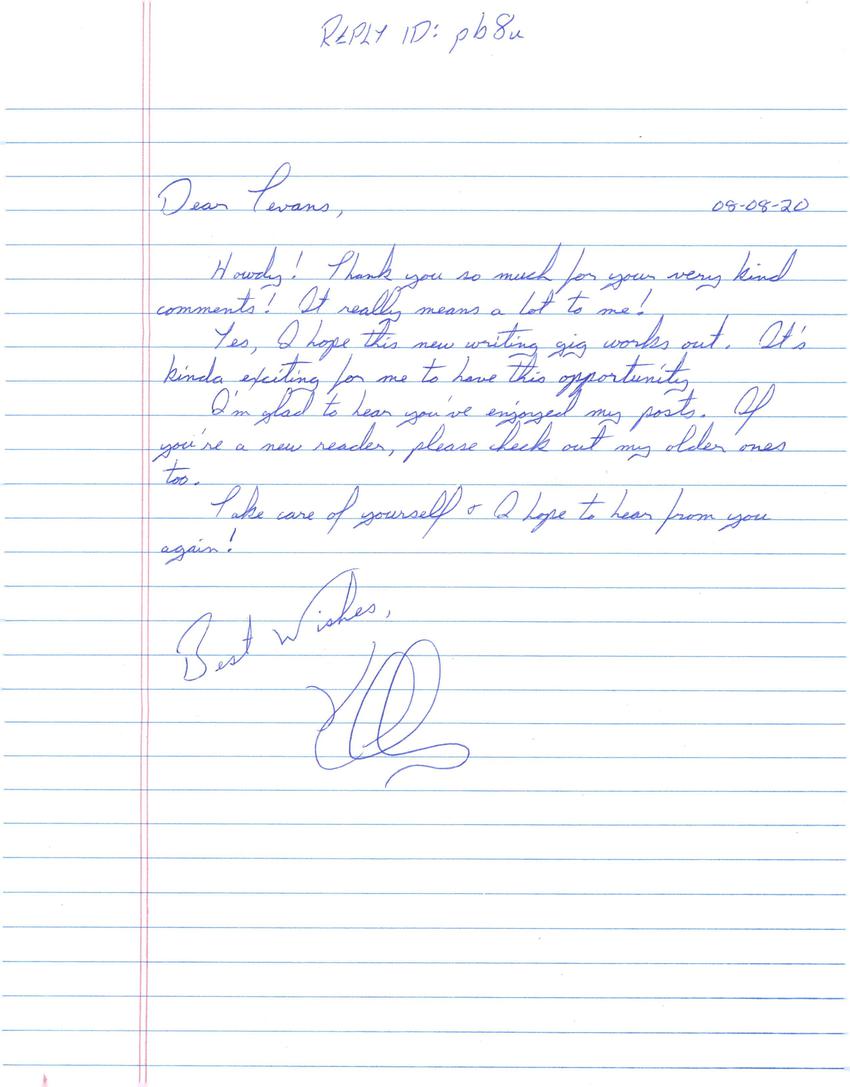