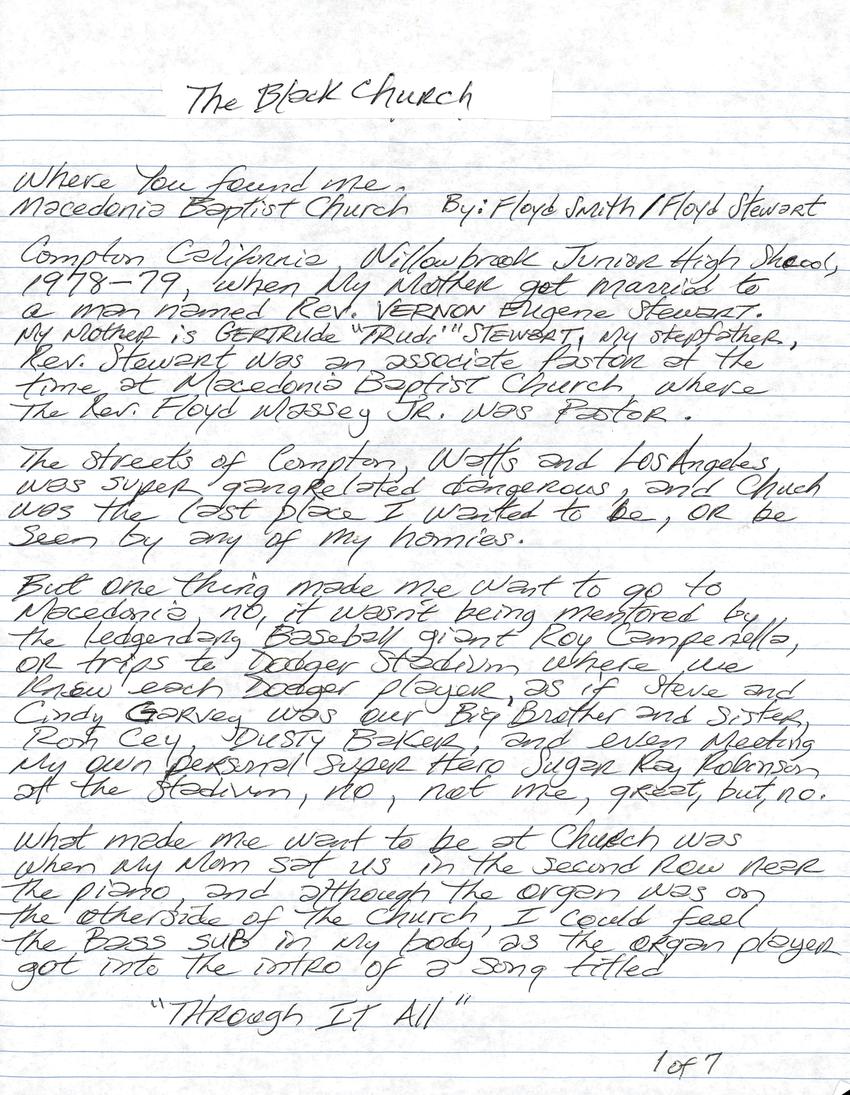 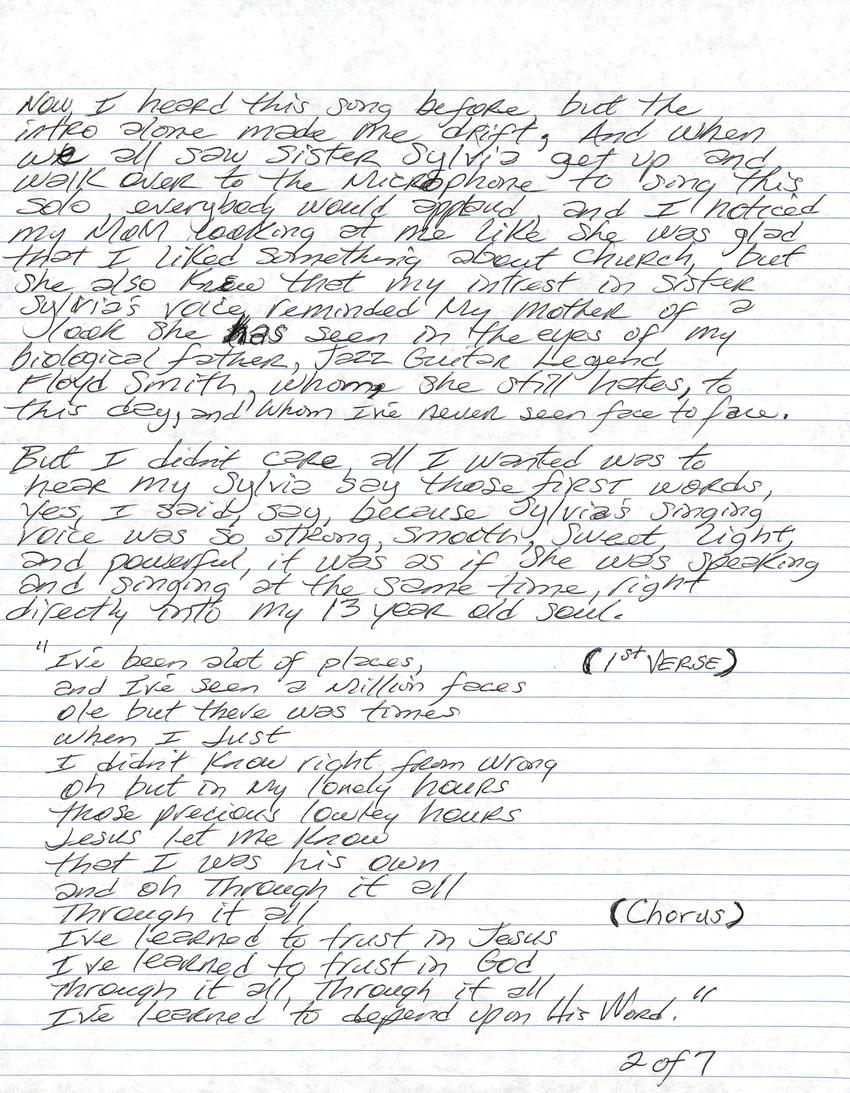 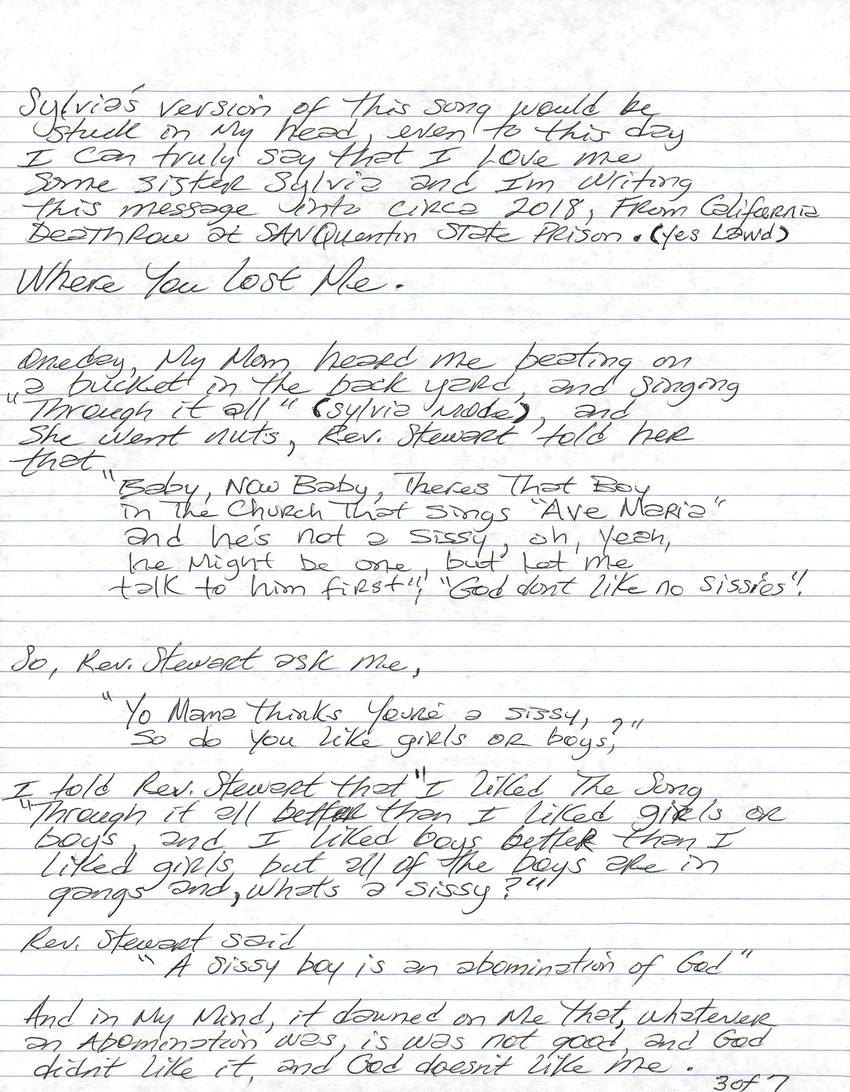 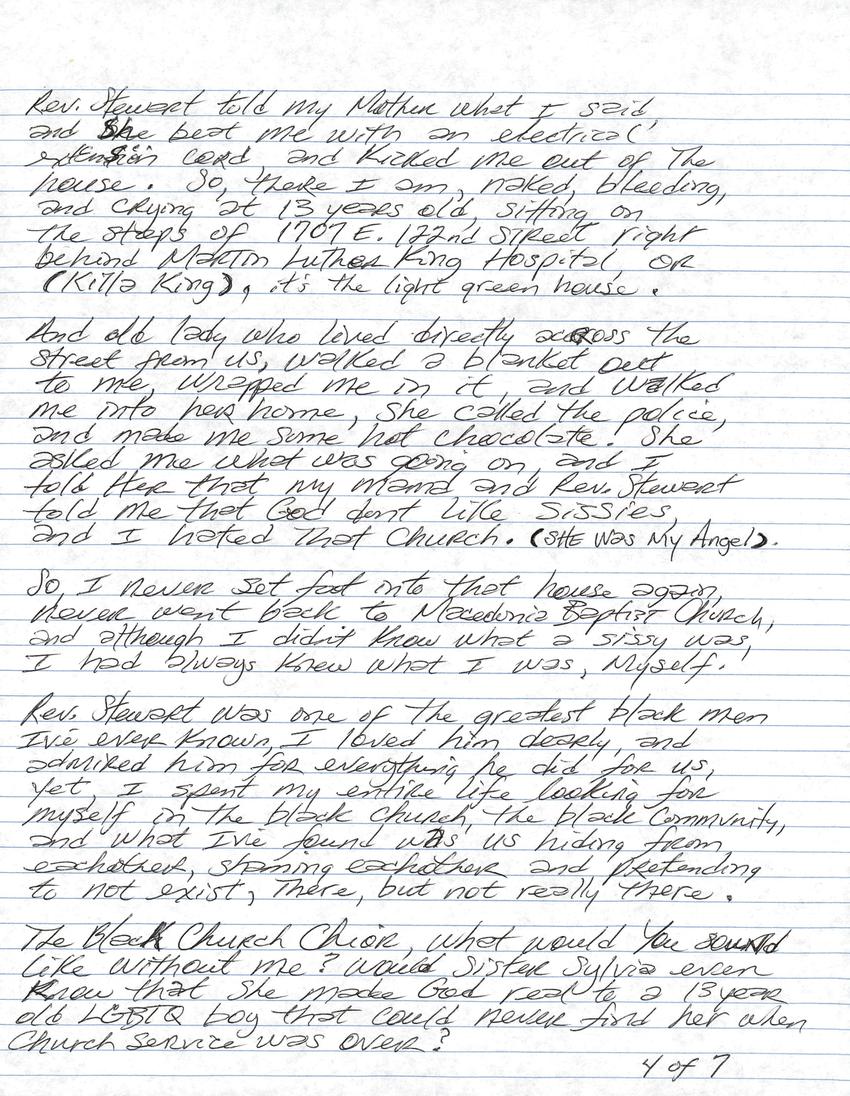 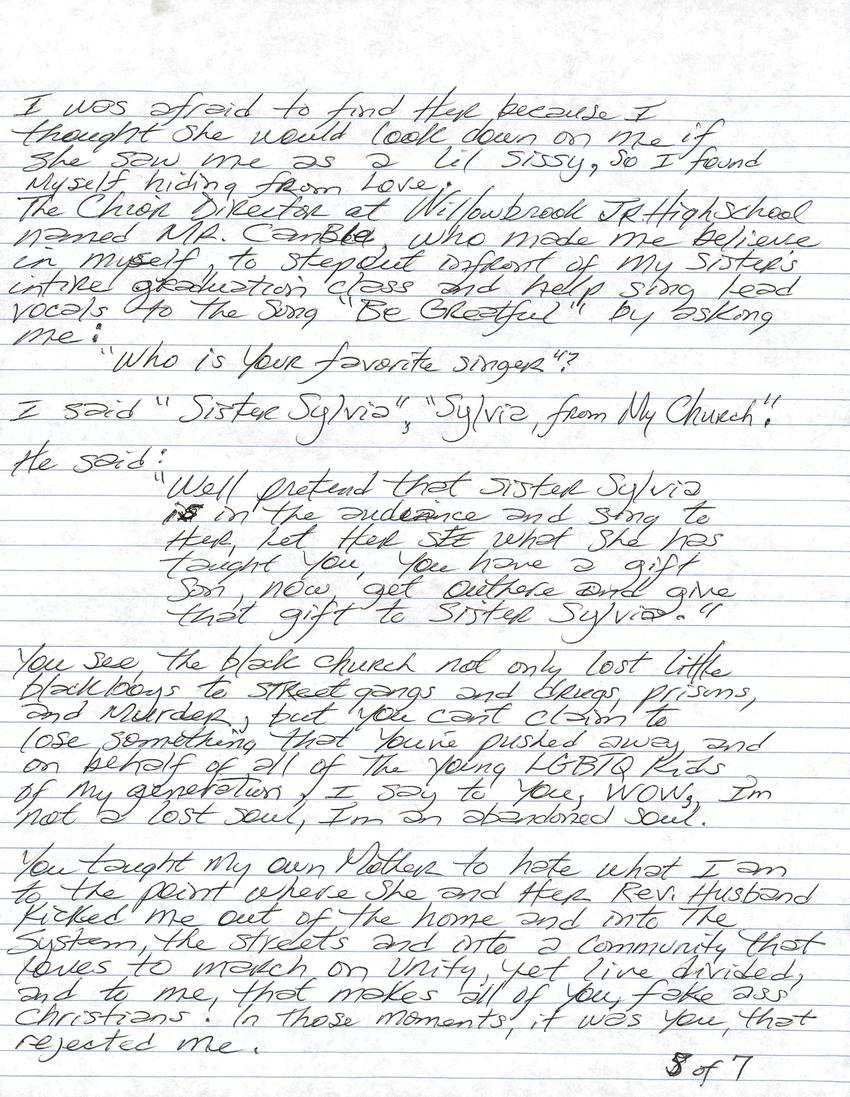 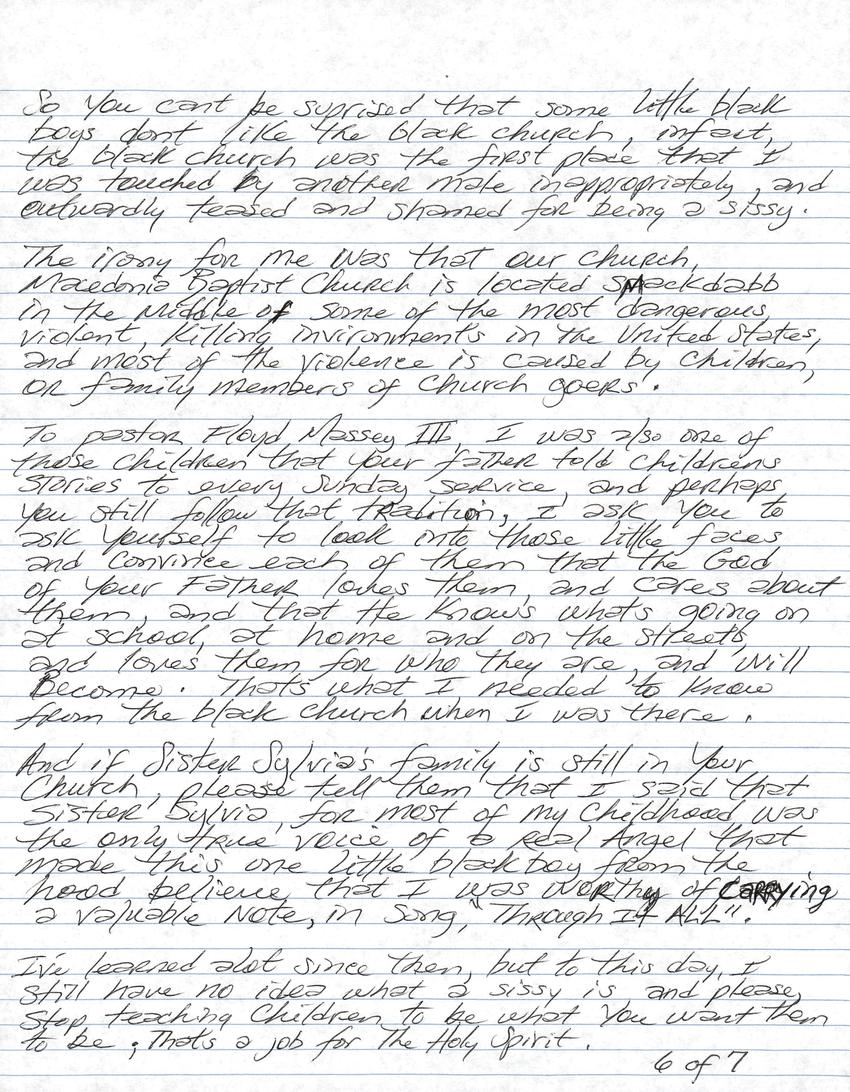 Where you found me.
Macedonia Baptist Church By: Floyd Smit/ Floyd Stewart

Compton California Willowbrook Junior High School, 1978-79, when
my mother got married to a man named Rev. Vernon Eugene Stewart.
My mother is Gertrude "Trudi" Stewart, my stepfather, Rev. Stewart
was an associate pastor at the time at Macedonia Baptist Church where
the Rev. Floyd Massey Jr. was pastor.

The streets of Compton, Watts and Los Angeles was super gang related
dangerous, and church was the last place I wanted to be, or be seen
by any of my homies.

But one thing made me want to go to Macedonia, no it wasn't being mentored
by the legendary baseball giant Roy Campenella, or trips to Dodger stadium
where we knew each Dodger player, as if Steve and Cindy Garvey was our big
brother and sister, Ron Cey, Dusty Baker, and even meeting my own super hero
Sugar Ray Robinson at the stadium, no, not me, great, but, no.

What made me want to be at church was when my Mom sat us in the second row
near the piano, and although the organ was on the other side of the church,
I could feel the bass sub in my body as the organ player got into the intro of
a song titled

Now, I heard this song before, but the intro alone made me drift. And when we all
saw Sister Sylvia get up and walk over to the microphone to sing this solo, everybody
would applaud, and I noticed my Mom looking at me like she was glad that I liked
something about church, but she also knew that my interest in Sister Sylvia's voice
reminded my mother of a look she has seen in the eyes of my biological father, Jazz
Guitar legend Floyd Smith, whom she still hates, to this day, and whom I've never seen
face to face.

But I didn't care, all I wanted was to hear my Sylvia say those first words, yes, I said,
say, because Sylvia's singing voice was so strong, smooth, sweet, light, and powerful, it
was as if she was speaking directly into my 13 year old soul.

Sylvia's version of this song would be stuck in my head, even to this day
I can truly say that I love me some Sister Sylvia and I'm writing this
message into circa 2018, from California Death Row at San Quentin State
Prison. (Yes Lawd)

Where you lost me.

One day, my Mom heard me beating on a bucket in the back yard, and singing
"Through it all" (Sylvia mode), and she went nuts, Rev. Stewart told her that
"Baby, now Baby, theres that boy in the church that sings "Ave Maria" and
he's not a sissy, oh, yeah, he might be one, but let me talk to him first",
"God don't like no sissies".

So, Rev. Stewart ask me,
"Yo Mama thinks you're a sissy, so do you like girls or boys?"

Rev. Stewart said: "A sissy boy is an abomination of God".

And in my mind, it dawned on me that, whatever an abomination was, it was not good,
and God didn't like it, and God doesn't like me.

Rev. Stewart told my mother what I said, and she beat me with an electrical extension
cord, and kicked me out of the house. So, there I am, naked, bleeding, and crying at
13 years old, sitting on the steps of 1707 E.122nd Street right behind Martin Luther King
Hospital, or (Killa King), it's the light green house.

An old lady who lived directly across the street from us, walked a blanket out to me,
wrapped me in it, and walked me into her home, she called the police, and made me some
hot chocolate. She asked me what was going on, and I told her that my mama and Rev. Stewart
told me that God don't like sissies, and I hated that church. (She was my Angel).

So, I never set foot into that house again, never went back to Macedonia Baptist Church,
and although I didn't know what a sissy was, I had always known what I was, Myself.

Rev. Stewart was one of the greatest black men I've ever known, I loved him dearly, and
admired him for everything he did for us, yet, I spent my entire life looking for myself
in the black church, the black community, and what I've found was us hiding from each other,
shaming each other and pretending to not exist. there, but not really there.

The Black Church Choir, what would you sound like without me? Would Sister Sylvia even know
that she made God real to a 13 year old LGBTQ boy that could never find her when church service
was over?

I was afraid to find her because I thought she would look down on me if she saw me as a lil sissy, so I found myself hiding from love.
The Choir Director at Willowbrook Jr. High School named Mr. Camble, who made me believe in myself, to step out in front of my sister's entire graduation class and help sing lead vocals to the song "Be Grateful" by asking me:
"Who is your favorite singer"?

I said "Sister Sylvia," "Sylvia, from my church."

He said:
"Well pretend that Sister Sylvia is in the audience and ing to her, let her SEE what she has taught you, you have a gift son, now get out there and give that gift to Sister Sylvia."

You see the black church not only lost little black boys to street gangs and drugs, prisons, and murder, but you can't claim to lose something that you've used away, and on behalf of all the young LGBTQ kids of my generation, I say to you, wow, I'm not a lost soul, I'm an abandoned soul.

You taught my own Mother to hate what I am to the 'point; where she and her Revi husband kicked me out of the home and into The System, the streets and into a community that loves to march on unity, yet live divided, and to me, that makes all fo you, fake ass Christians! In those moments, it was you, that rejected me. So you can't be surprised that some little black boys don't like the black church, in fact the black church as the first place that I was touched by another male inappropriately, and eventually teased and shamed for being a sissy.

The irony for me was that our church Macedonia Baptist Chruch is located Smackdabb in the middle of some of the most dangerous violent, killing environments in the United States, and most of the violence is caused by children, or family members of church goers.

To pastor Floyd Massey II, I was also one of those children that your father told children's stories to every Sunday service, and perhaps you still follow that tradition, I ask you to ask yourself to look into those little faces and convince each of them that the God of your Father loves them, and cares about them, and that He knows what's going on at school, at home and on the streets, and lose them for who they are, and will become. That's what I needed to know from the black church when I was there.

And if Sister Sylvia's family is still in Your Church, please tell them that I said that Sister Sylvia, for most of my childhood, was the only true voice of a real angel that made this one little black boy from the hood believe that I was worthy of carrying a valuable note, in song, "Through it ahh".

I've learned a lot since then, but to this day, I still have no idea what a sissy is and please, stop teaching children to be what you want them to be; That's a job for the Holy Spirit.
"Go ye therefore into all the world and preach the good news"

All the world means to me that everybody should know about the good news of God's mercy, if we can just start there, perhaps little black boys would engage this value.

I want to end this letter by saying to the young brother that sang the great classics like Ave Maria on occasion, at Macedonia Baptist Church in the late 1970s,

"You equally inspired me to invest in developing my own vocal skillset, at 13 years old, I saw you as an amazing vocalist, and one to he best form our hood, and although I don't know your name, I intentionally evaded knowing you because I didn't want for you to experience the stigma I was experiencing at the time. But I saw you, and I hope that your true genius is honored and respected."

I love all of you, and there is nothing you can do to stop my love. There is a new generation rising from the streets of L.A, Compton and Watts and I hope that I have said something in this letter to encourage all of you to encourage our innercity youth to view the Macedonia family, and Church as the home of all of God's children, in real time.