No Place To Land 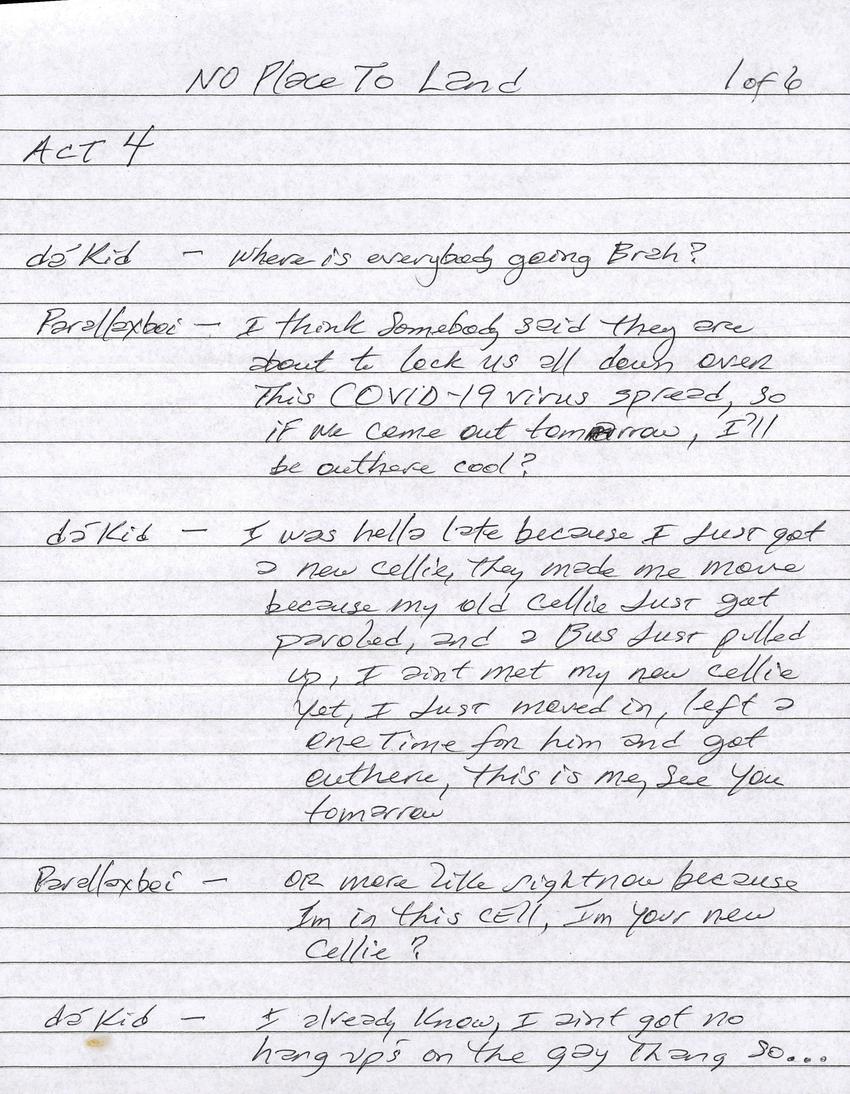 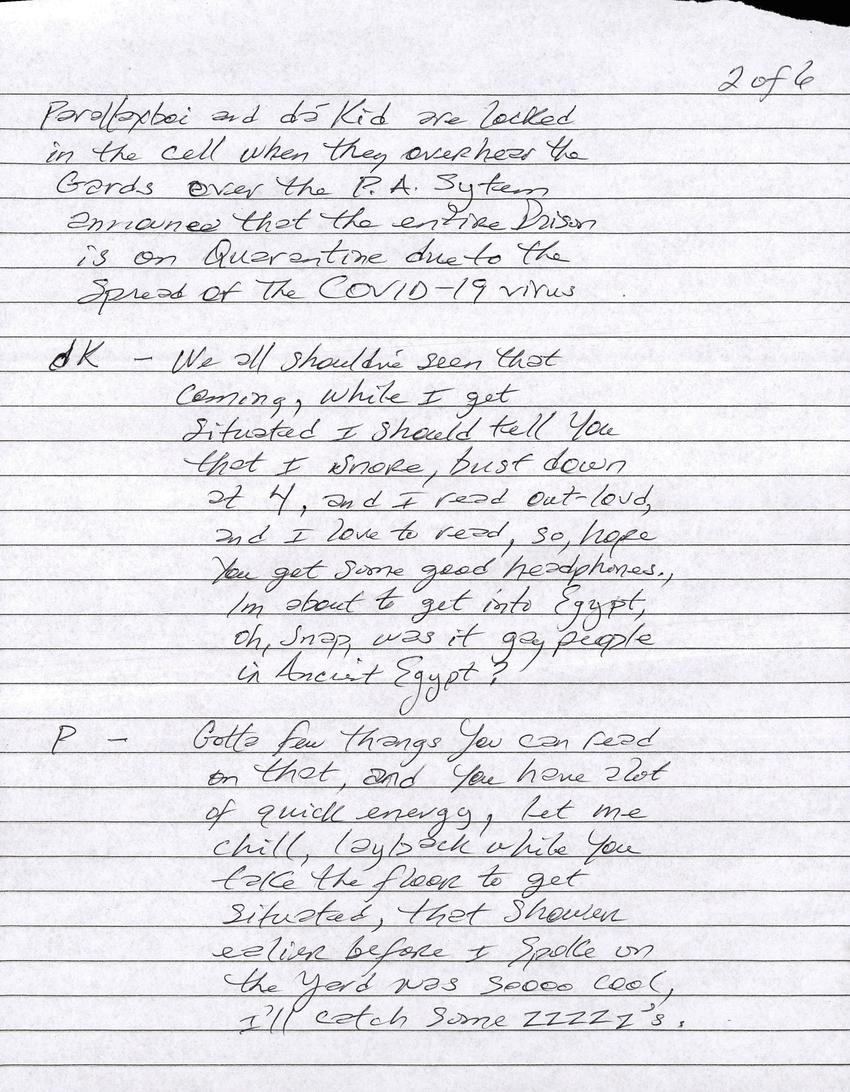 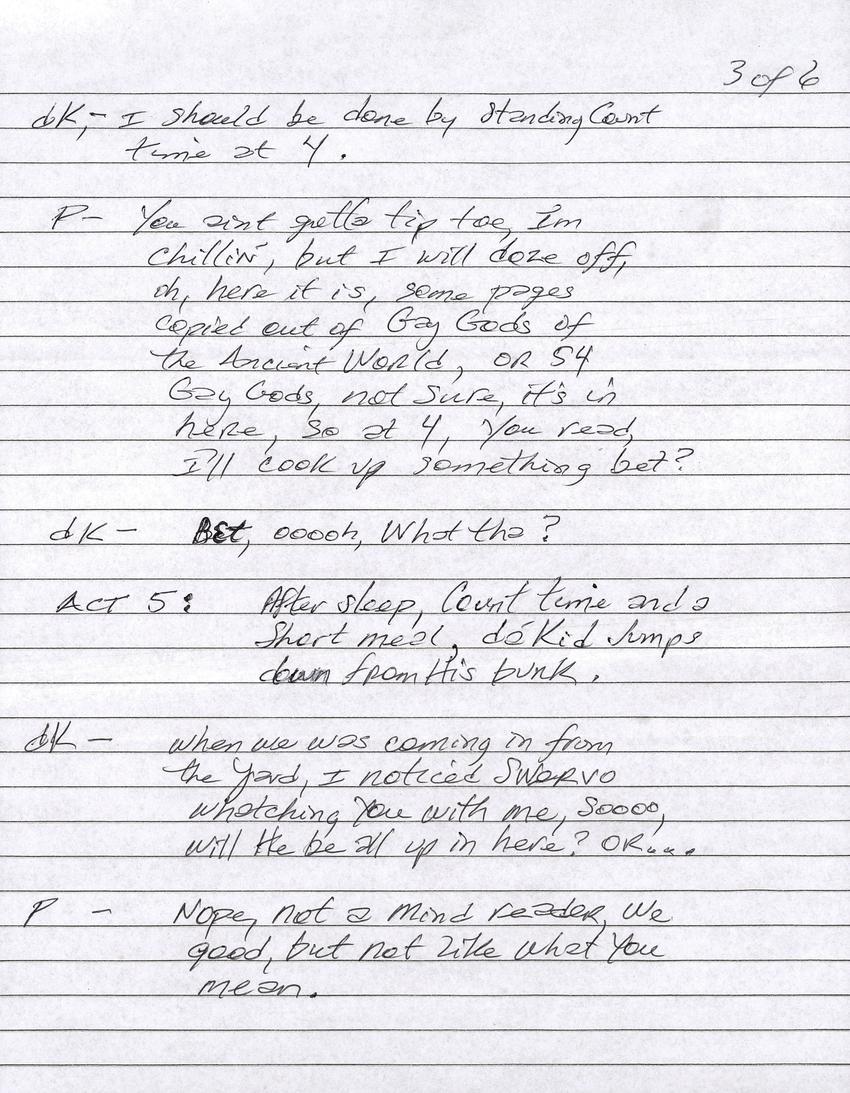 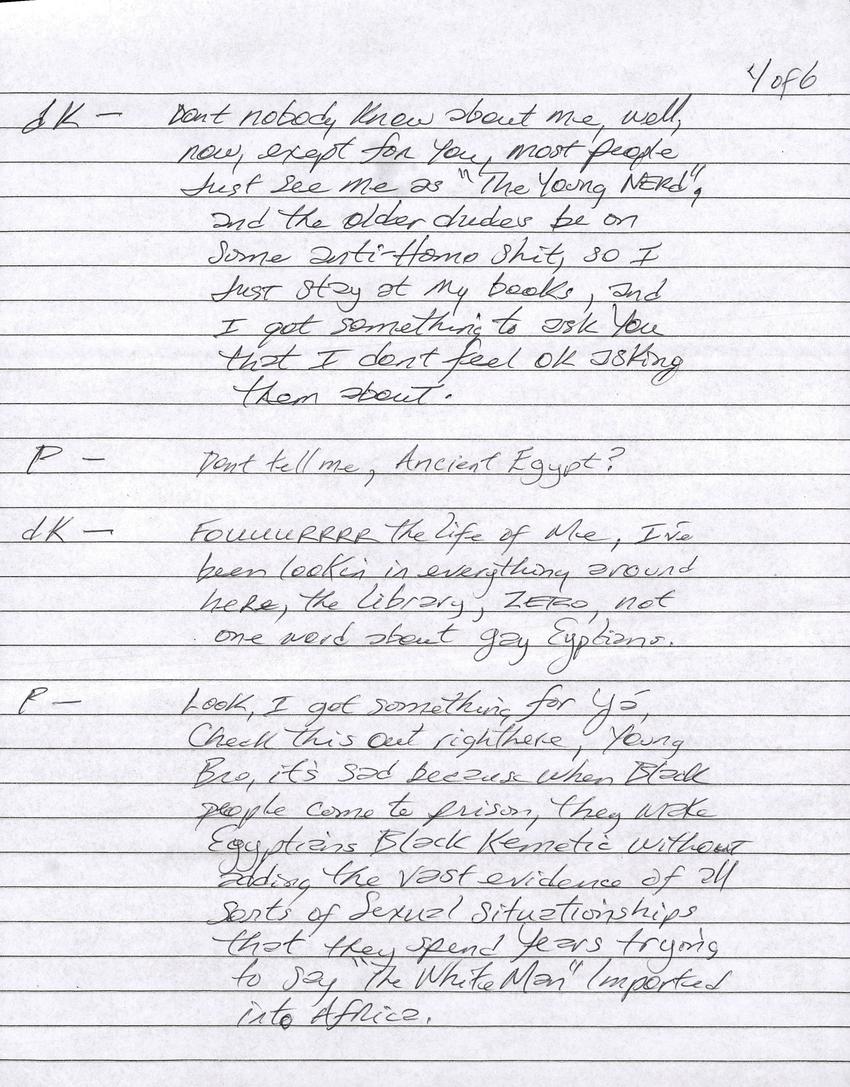 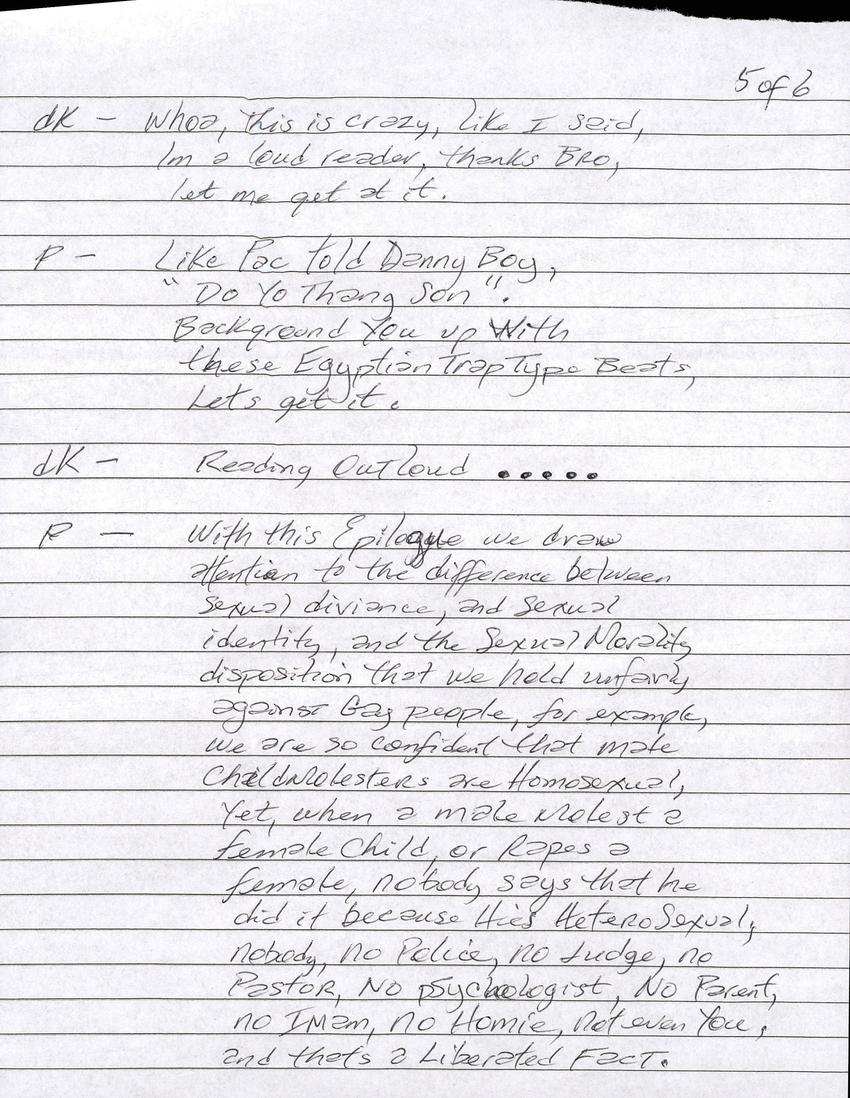 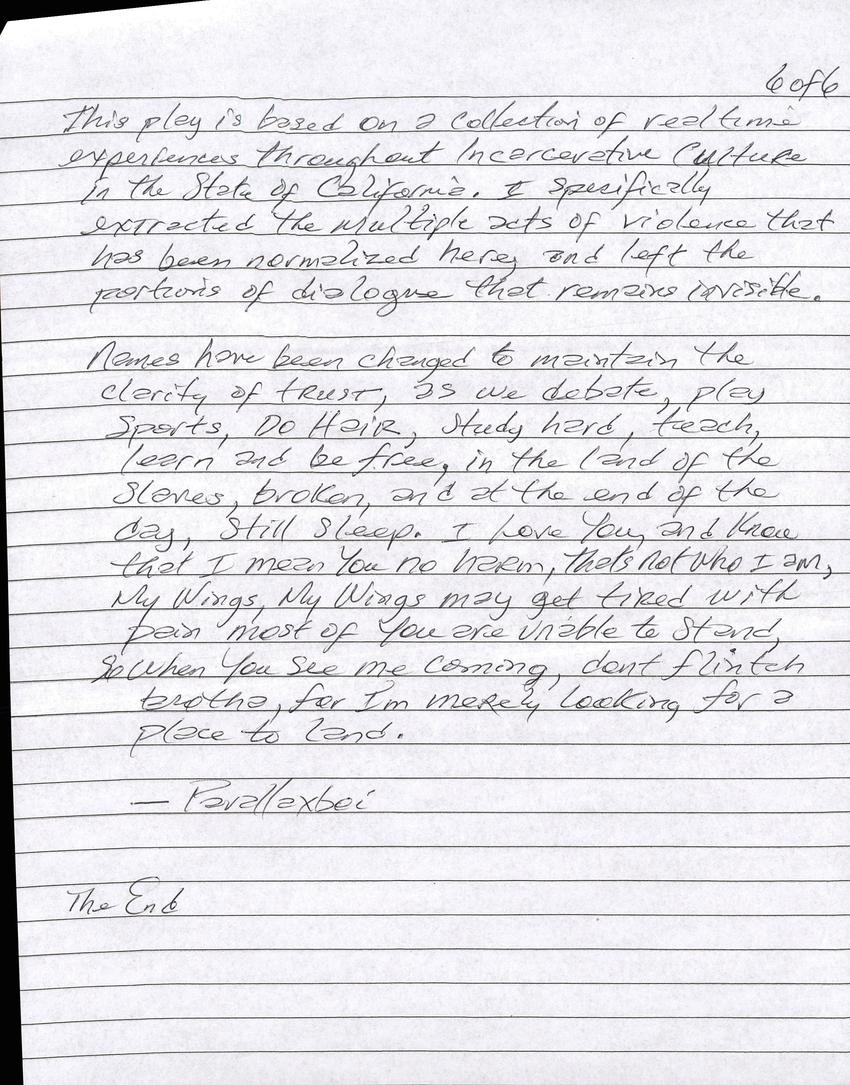 No Place to Land

da'Kid - Where is everybody going Brah?

Parallaxboi - I think somebody said they are about to lock us all down over this COVID-19 virus spread, so if we came out tomorrow, I'll be out there cool?

da-Kid - I was hella late because I just got a new cellie, they made me move because my old cellie just got paroled, and a bus just pulled up. I ain't met my new cellie yet, I just moved in, left at one time for him and got out there, this is me, see you tomorrow.

Parallaxboi - Or more like right now because I'm in this cell, I'm your new cellie?

Parallaxboi and da-Kid are locked in the cell when they overhear the guards over the P.A. system announce that the entire prison is on quarantine due to the spread of the COVID-19 virus.

da-Kid - We all should've seen that coming, wile I get situated I should tell you that I snore, bust down at 4, and I read out-loud, and I love to read, so hope you get some good headphones. I'm about to get into Egypt, oh, snap, was it gay people in Ancient Egypt?

Parallaxboi - Gotta few thangs you can read on that and you have a lot of quick energy, let me chill, lay back while you take the floor to get situated, that shower earlier before I spoke on the yard was soooo cool, I'll catch some zzzzz's.

da-Kid - I should be done by standing count time at 4.

Parallaxboi - You ain't gotta tip toe, I'm chillin, but I will doze off. Oh, here it is, some pages copied out of Gay Gods of The Ancient World, or 54 Gay Gods, not sure, it's in here, so at 4, you read, I'll cook up something bet?

After sleep, count time and a short meal, da-Kid jumps down from his bunk.

da-Kid - When we was coming in from the yard, I noticed SWERVO watching you with me, soooo, will he be all up in here? Ok...

Parallaxboi - Nope, not a mind reader, we good, but not like what you mean.

da-Kid - Don't nobody knew about me, well, now, except for you, most people just see me as "The Young Nerd" and the older dudes be on some anti-homo shit, so I just stay at my books, and I got something to ask you that I don't feel OK asking them about.

da-Kid - Fouuurrr the Life of me, I've been lookin in everything around here, the library, zero, not one word about gay Egyptians.

Parallaxboi - Look, I got something for ya, check this out right here, Young Bro, it's sad because when black people come to prison, they make Egyptians Black Kemetic without adding to vast evidence of all sorts of sexual situation-ships that they spend years trying to say "the White Man" imported into Africa.

Parallaxboi - Like Pac told Danny Boy, "do yo thang son". Background you up with the Egyptian trap type beats, let's get it.

Parallaxboi - With this Epilogue, we draw attention to the difference between sexual deviance, and sexual identity, and the sexual morality disposition that we hold unfairly against gay people, for example, we are so confident that male child molesters are homosexual, yet, when a male molest a female child, or rapes a female, nobody says that he did it because he's heterosexual, nobody, no police, no judge, no pastor, no psychologist, no parent, no Iman, no homie, not even you, and that's a liberated fact.

This play is based on a collection of real-time experiences throughout incarcerative culture in the State of California I specifically extracted the multiple acts of violence that has been normalized here, and left the portions of dialogue that remain invisible.

Names have been changed to maintain the clarity of trust, as we debate, play sports, do hair, study hard, teach, learn and be free, in the land of the slaves, broken, and at the end of the day, still sleep. I love you, and know that I mean you no harm, that's not who I am, my wings, my wings may get tired with pain most of you are unable to stand, so when you see me coming, don't flinch brotha, for I'm merely looking for a place to land.

Thanks for writing! I finished the transcription for your post. Interesting analogy. Keep writing!!