Cleaning Up The Tube 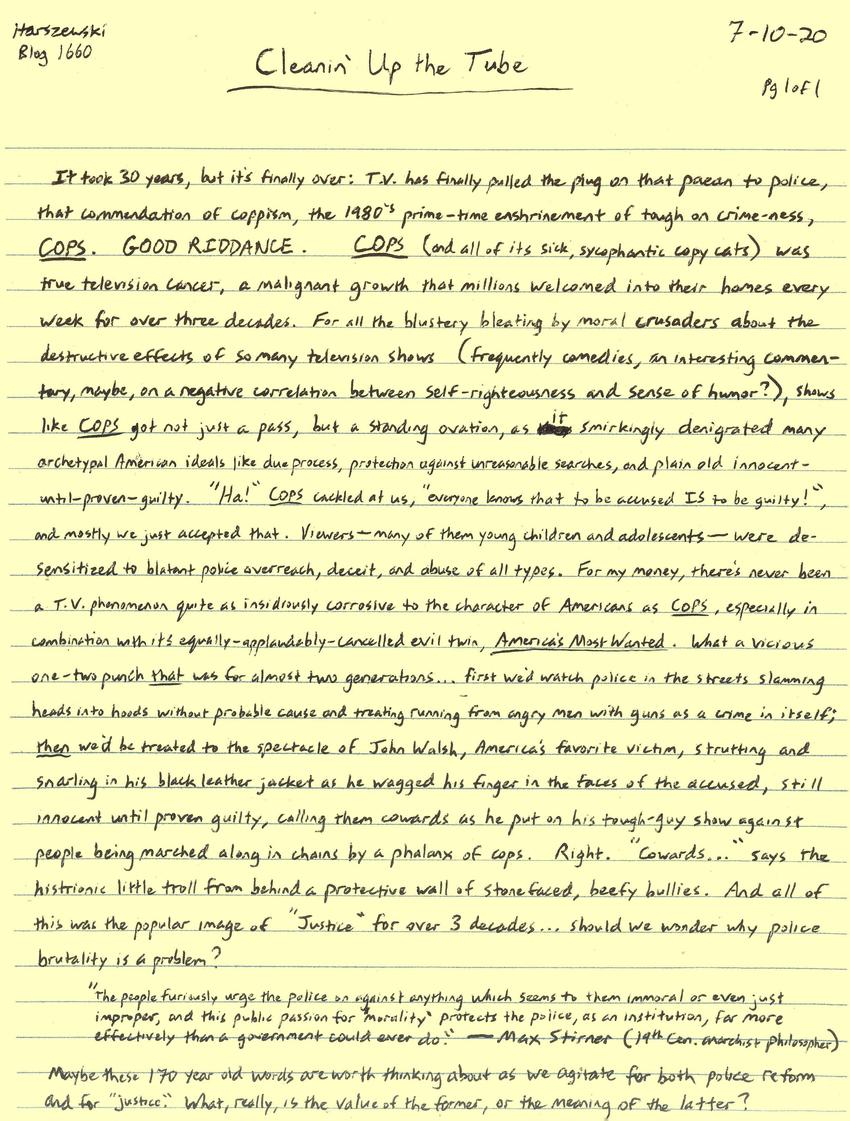 Cleanin' Up the Tube

It took 30 years, but it's finally over: T.V. has finally pulled the plug on that paean to police, that commendation of coppism, the 1980's prime-time enshrinement of tough on crime-ness, COPS. GOOD RIDDANCE. COPS (and all of its sick, sycophantic copycats) was true television cancer, a malignant growth that millions welcomed into their homes every week for over three decades. For all the blustery bleating by moral crusaders about the destructive effects of so many television shows (frequently comedies, an interesting commentary, maybe, on a negative correlation between self-righteousness and sense of humor?), shows like COPS got not just a pass, but a standing ovation, as it smirkingly denigrated many archetypal American ideals like due process, protection against unreasonable searches, and plain old innocent-until-proven-guilty. "Ha!" COPS cackled at us, "everyone knows that to be accused IS to be guilty!", and mostly we just accepted that. Viewers — many of them young children and adolescents — were desensitized to blatant police overreach, deceit, and abuse of all types. For my money, there's never been a T.V. phenomenon quite as insidiously corrosive to the character of Americans as COPS, especially in combination with its equally-applaudable-canceled evil twin, America's Most Wanted. What a vicious one-two punch that was for almost two generations...first we'd watch police in the streets slamming heads into hoods without probable cause and treating running from angry men with guns as a crime in itself; then we'd be treated to the spectacle of John Walsh, America's favorite victim, strutting and snarling in his black leather jacket as he wagged his finger in the faces of the accused, still innocent until proven guilty, calling them cowards as he put on his tough-guy show against people being marched along in chains by a phalanx of cops. Right. "Cowards..." says the histrionic little troll from behind a protective wall of stonefaced, beefy bullies. And all of this was the popular image of "Justice" for over 3 decades...should we wonder why police brutality is a problem?

"The people furiously urge the police on against everything which seems to them immoral or even just improper, and this public passion for "morality" protects the police, as an institution, far more effectively than a government could ever do." — Max Stirner (19th cen. anarchist philosopher)

Maybe these 170-year-old words are worth thinking about as we agitate for both police reform and for "justice." What, really, is the value of the former, or the meaning of the latter?

Damn....These are some powerful words. I humbly agree. TV shows like COPS, America's Most Wanted, or even more recently, Live PD, could be partially the reason why we have police brutality. It definitely is worth something to think about.

Either way, stay safe and healthy, my guy.