Donald Trump And The Statist Sidewalk 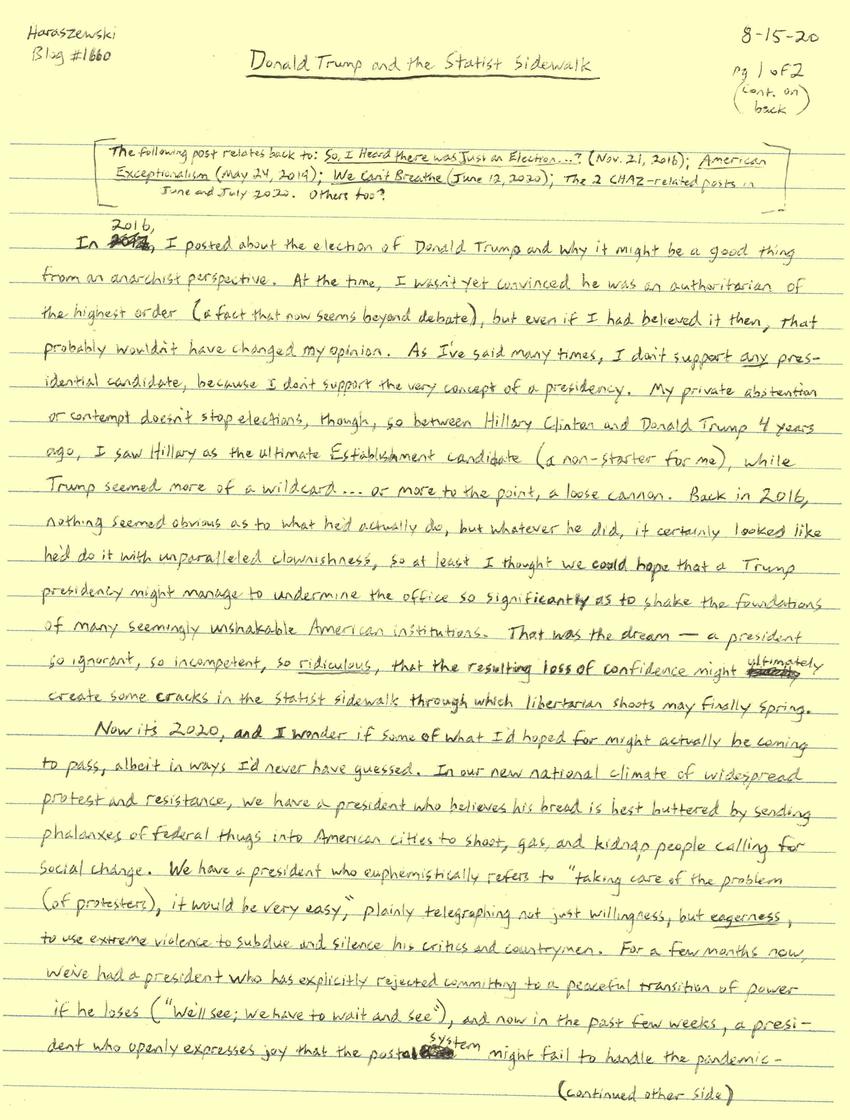 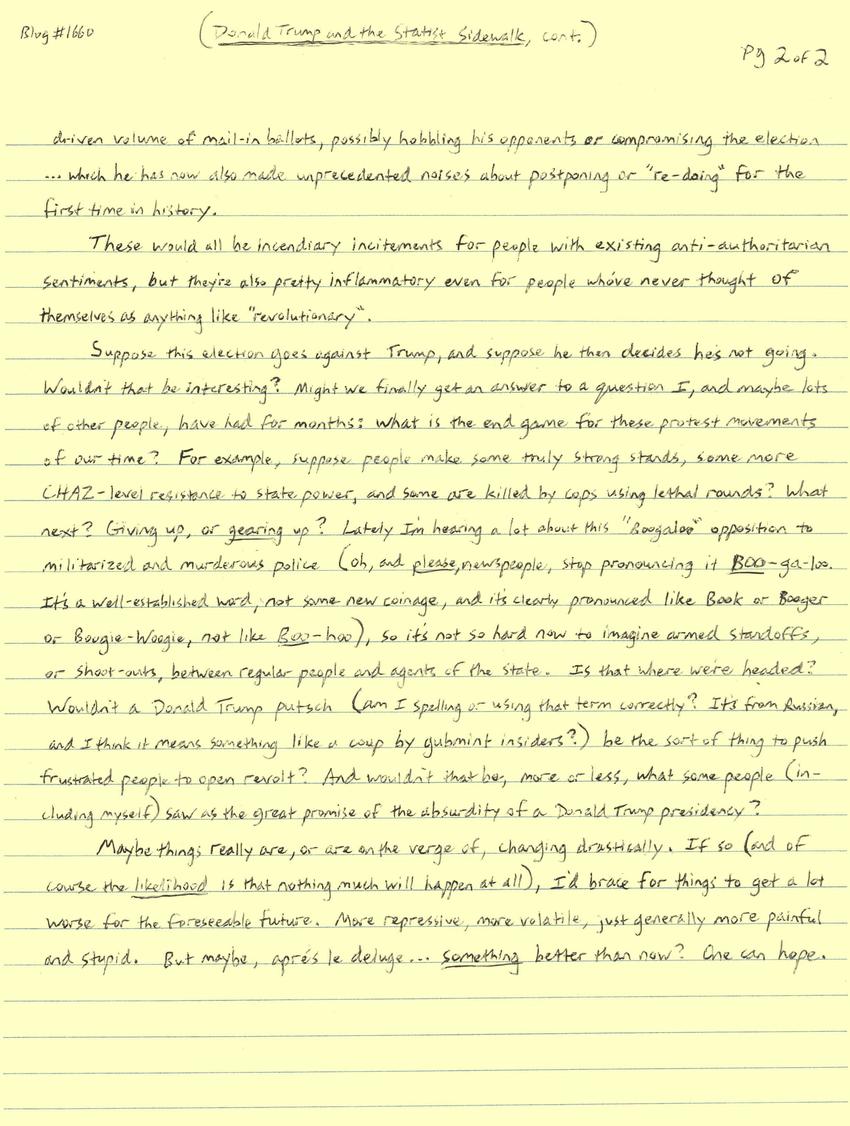 Donald Trump and the Statist Sidewalk

In 2016, I posted about the election of Donald Trump and why it might be a good thing from an anarchist perspective. At the time, I wasn't yet convinced he was an authoritarian of the highest order (a fact that now seems beyond debate), but even if I had believed it then, that probably wouldn't have changed my opinion. As I've said many times, I don't support any presidential candidate, because I don't support the very concept of presidency. My private abstention or contempt doesn't stop elections, though, so between Hillary Clinton and Donald Trump 4 years ago, I saw Hillary as the ultimate Establishment candidate (a non-starter for me), while Trump seemed more of a wildcard... or more to the point, a loose cannon. Back in 2016, nothing seemed obvious as to what he'd actually do, but whatever he did, it certainly looked like he'd do it with unparalleled clownishness, so at least I thought we could hope that a Trump presidency might manage to undermine the office so significantly as to shake the foundations of many seemingly unshakable American institutions. That was the dream - a president so ignorant, so incompetent, so ridiculous, that the resulting loss of confidence might ultimately create some cracks in the statist sidewalk through which libertarian shoots may finally spring.

Now it's 2020, and I wonder if some of what I'd hoped for might actually be coming to pass, albeit in ways I'd never have guessed. In our new national climate of widespread protest and resistance, we have a president who believes his bread is best buttered by sending phalanxes of federal thugs into American cities to shoot, gas, and kidnap people calling for social change. We have a president who euphemistically refers to "taking care of the problem (of protesters), it would be very easy," plainly telegraphing not just willingness, but eagerness, to use extreme violence to subdue and silence his critics and countrymen. For a few months now, we've had a president who has explicitly rejected committing to a peaceful transition of power if he loses ("We'll see; we have to wait and see"), and now in the past few weeks, a president who openly expresses joy that the postal system might fail to handle the pandemic- driven volume of mail-in ballots, possibly hobbling his opponents or compromising the election... which he has now also made unprecedented noises about postponing or "re-doing" for the first time in history.

These would all be incendiary incitements for people with existing anti-authoritarian sentiments, but they're also pretty inflammatory even for people who've never thought of themselves as anything like "revolutionary."

Suppose this election goes against Trump, and suppose he then decides he's not going. Wouldn't that be interesting? Might we finally get an answer to a question I, and maybe lots of other people, have had for months: what is the end game for these protest movements of our time? For example, suppose people make some truly strong stands, some more CHAZ-level resistance to state power, and some are killed by cops using lethal rounds? What next? Giving up, or gearing up? Lately I'm hearing a lot about this "Boogaloo" opposition to militarized and murderous police (oh, and please, newspeople, stop pronouncing it BOO-ga-loo. It's a well-established word, not some new coinage, and it's clearly pronounced like Book or Booger or Boogie-Woogie, not like Boo-hoo), so it's not so hard now to imagine armed standoffs, or shoot-outs, between regular people and agents of the state. Is that where we're headed? Wouldn't a Donald Trump putsch (am I spelling that term correctly? It's from Russian, and I think it means something like a coup by gubmint insiders?) be the sort of thing to push frustrated people to open revolt? And wouldn't that be, more or less, what some people (including myself) saw as the great promise of the absurdity of a Donald Trump presidency?

Maybe things really are, or are on the verge of, changing drastically. If so (and of course the likelihood is that nothing much will happen at all), I'd brace for things to get a lot worse for the foreseeable future. More repressive, more volatile, just generally more painful and stupid. But maybe, apres le deluge... something better than now? One can hope.