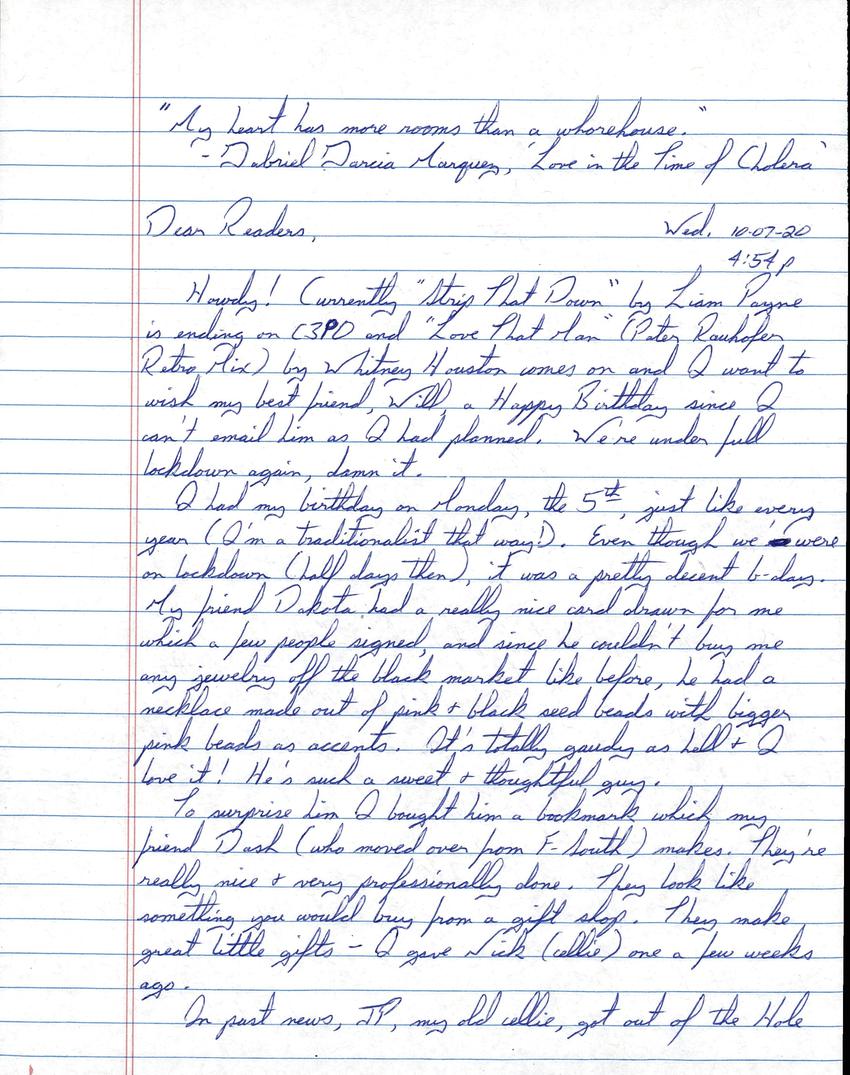 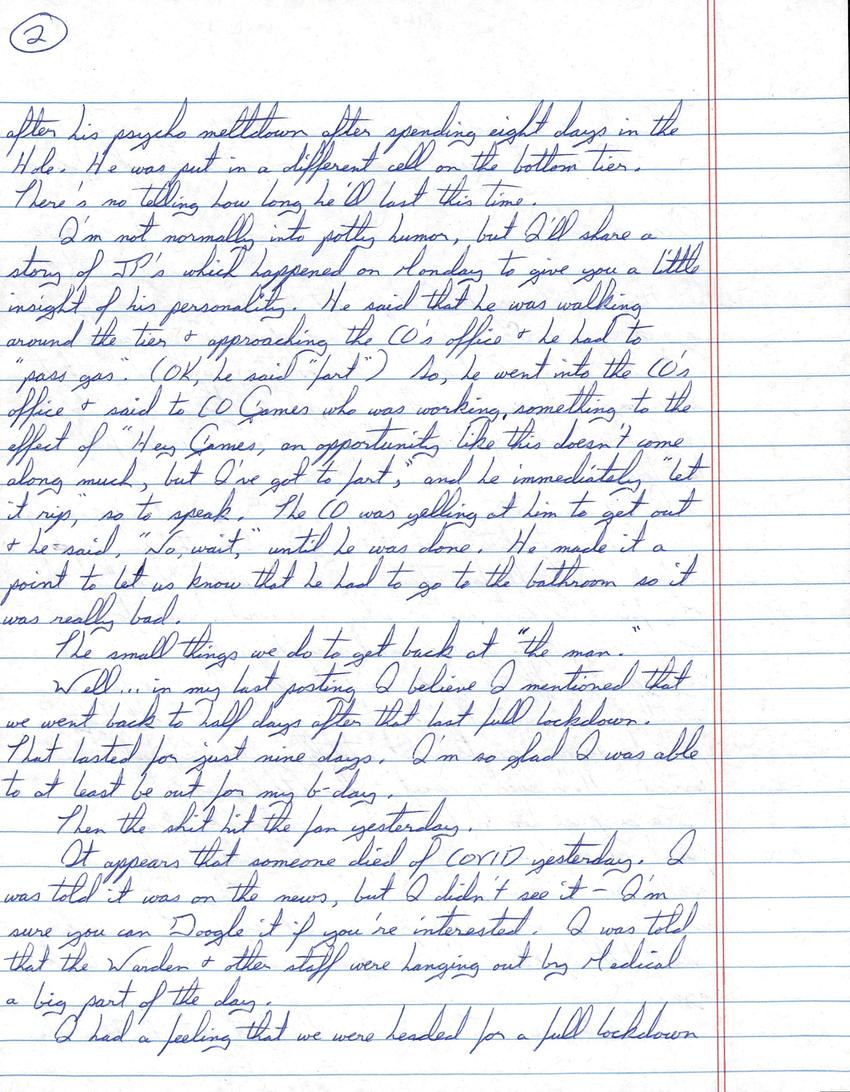 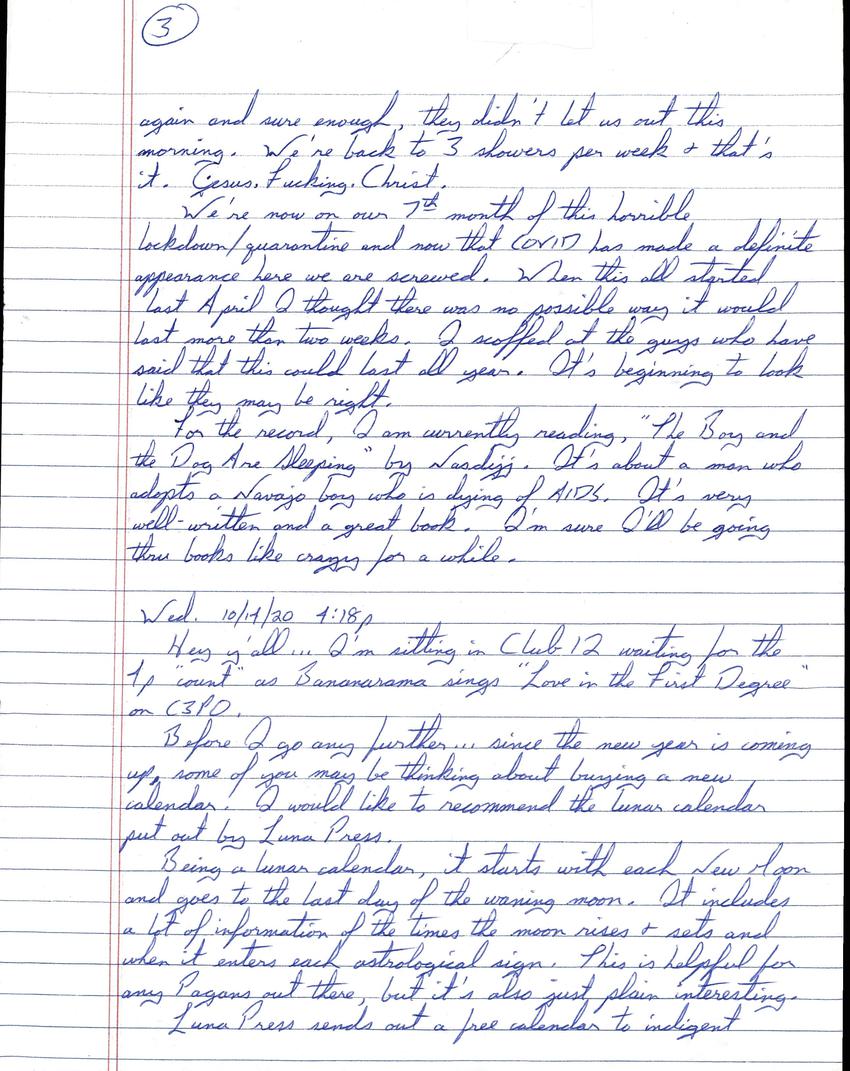 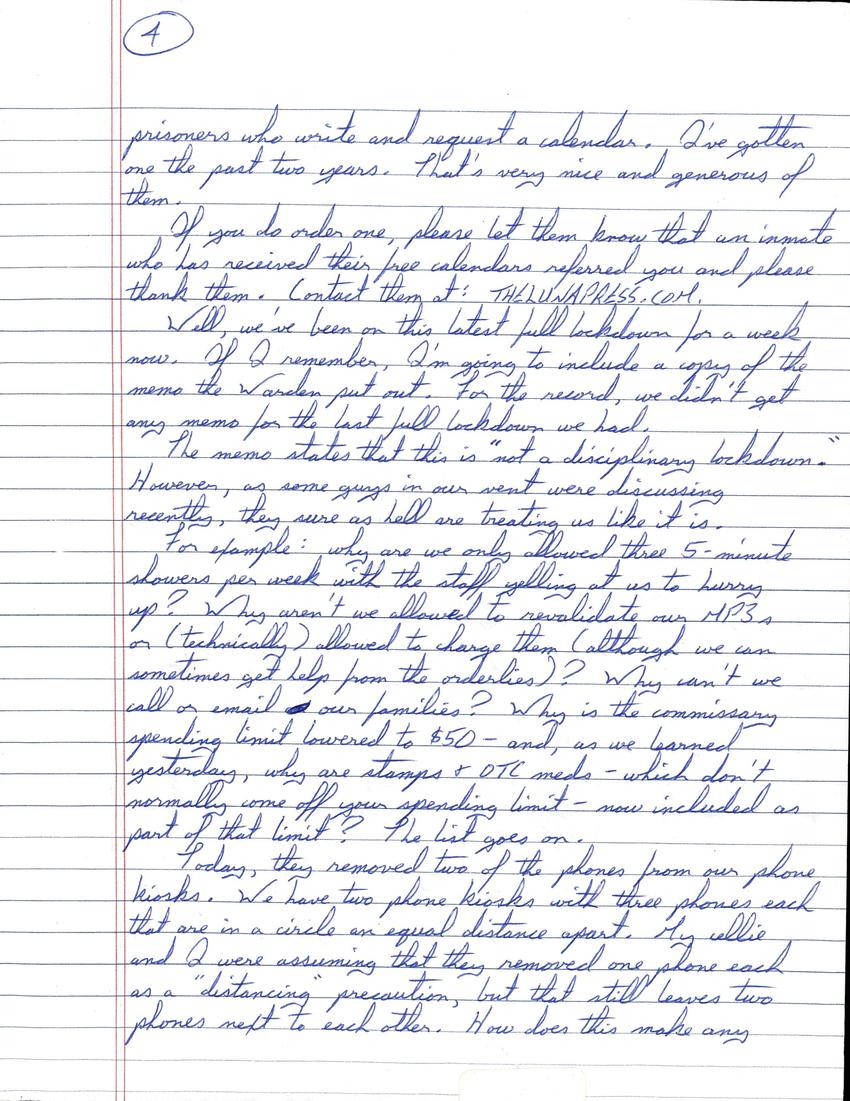 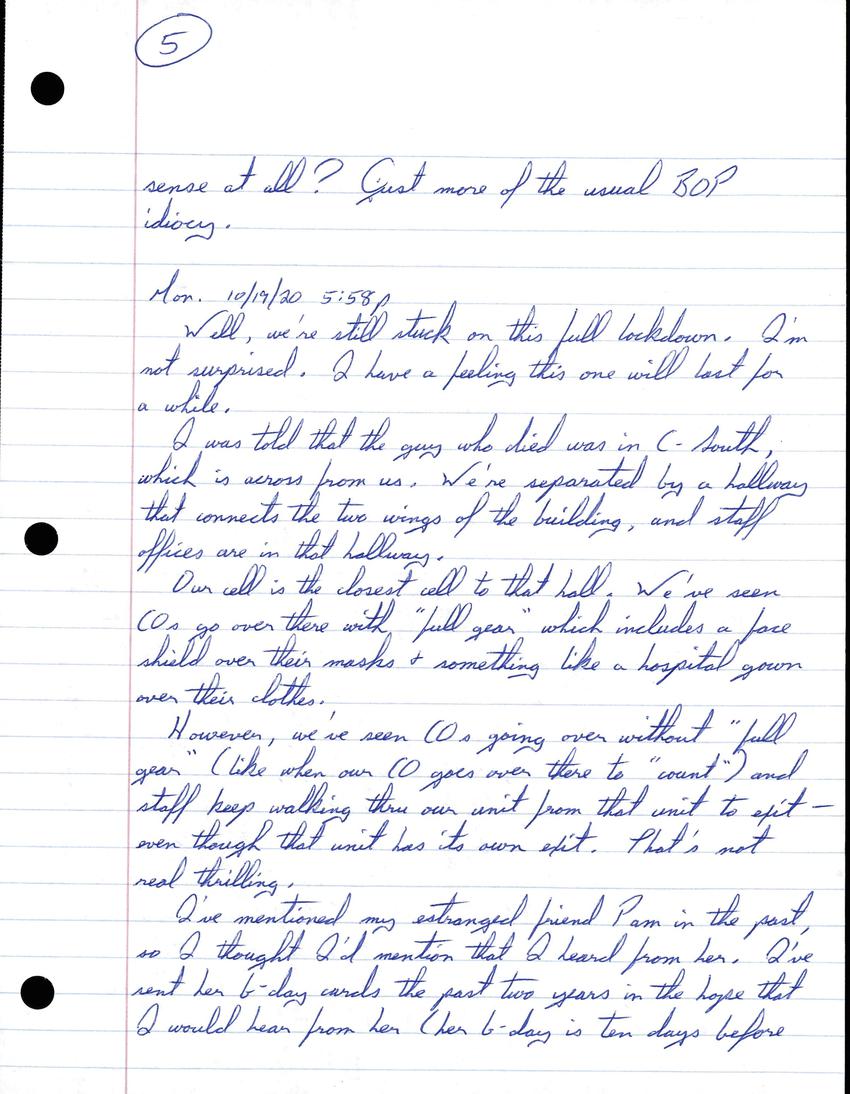 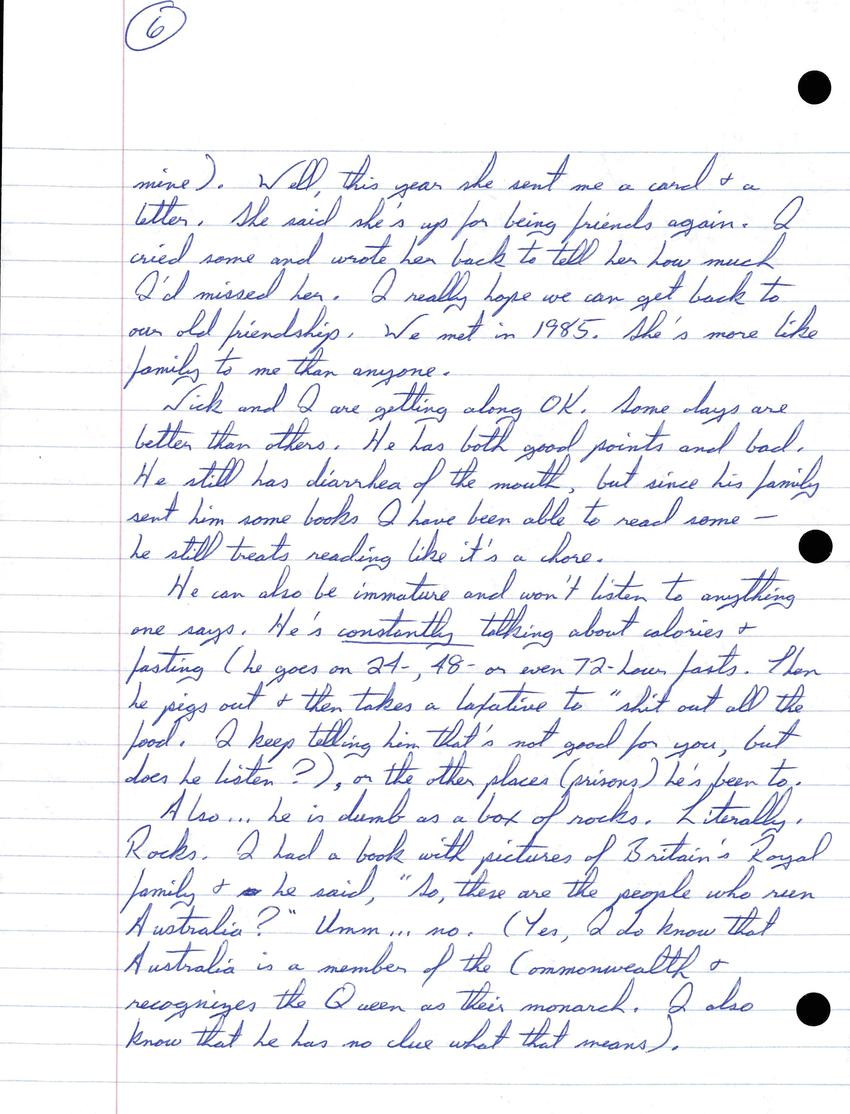 "My heart has more rooms than a whorehouse."
-Gabriel Garcia Marquez, 'Love in the Time of Cholera'

Dear Readers, Wed, 10-07-20
4:54 p
Howdy! Currently "Strip That Down" by Liam Payne
is ending on C3PO and "Love That Man" (Peter Rauhofer
Retro Mix) by Whitney Houston comes on and I want to
wish my best friend, Will, a Happy Birthday since I
can't email him as I had planned. We're under full
lockdown again, damn it.
I had my birthday on Monday, the 5th, just like every
year (I'm a traditionalist that way!). Even though we were
on lockdown (half days then), it was a pretty decent b-day.
My friend Dakota had a really nice card drawn for me
which a few people signed, and since he couldn't buy me
any jewelry off the black market like before, he had a
necklace made out of pink + black seed beads with bigger
pink beads as accents. It's totally gaudy as hell + I
love it! He's such a sweet + thoughtful guy.
To surprise him I bought him a bookmark which my
friend Dash (who moved over from F-South) makes. They're
really nice + very professionally done. They look like
something you would buy from a gift shop. They make
great little gifts - I gave Nick (cellie) one a few weeks
ago.
In past news, JP, my old cellie, got out of the Hole
after his psycho meltdown after spending eight days in the
Hole. He was put in a different cell on the bottom tier.
There's no telling how long he'll last this time.
I'm not normally into potty humor, but I'll share a
story of JP's which happened on Monday to give you a little
insight of his personality. He said that he was walking
around the tier + approaching the CO's office + he had to
"pass gas." (OK, he said "fart") So, "he went into the CO's
office + said to CO James who was working, something to the
effect of "Hey James, an opportunity like this doesn't come
along much, but I've got to fart," and he immediately "let
it rip," so to speak. The CO was yelling at him to get out
+ he said "No, wait," until he was done. He made it a
point to let us know that he had to go to the bathroom so it
was really bad.
The small things we do to get back at "the man."
Well... in my last posting I believe I mentioned that
we went back to half days after that last full lockdown.
That lasted for just nine days. I'm so glad I was able
to at least be out for my b-day.
Then the shit hit the fan yesterday.
It appears that someone died of COVID yesterday. I
was told it was on the news, but I didn't see it - I'm
sure you can Google it if you're interested. I was told
that the Warden + other staff were hanging out by Medical
a big part of the day.
I had a feeling that we were headed for a full lockdown
again and sure enough, they didn't let us out this
morning. We're back to 3 showers per week + that's
it. Jesus. fucking. Christ.
We're now on our 7th month of this horrible
lockdown/quarantine and now that COVID has made a definite
appearance here we are screwed. When this all started
last April I thought there was no possible way it would
last more than two weeks. I scoffed at the guys who have
said that this could last all year. It's beginning to look
like they may be right.
For the record, I am currently reading, "The Boy and
the Dog Are Sleeping" by Nasdijj. It's about a man who
adopts a Navajo boy who is dying of AIDS. It's very
well-written and a great book. I'm sure I'll be going
thru books like crazy for a while.

Wed 10/14/20 4:18p
Hey y'all... I'm sitting in Club 12 waiting for the
4p "count" as Bananarama sings "Love in the First Degree"
on C3PO.
Before I go any further... since the new year is coming
up, some of you may be thinking about buying a new
calendar. I would like to recommend the lunar calendar
put out by Luna Press.
Being a Lunar calendar, it starts with each New Moon
and goes to the last day of the waning moon. it includes
a lot of information of the times the moon rises + sets and
when it enters each astrological sign. This is helpful for
any Pagans out there, but it's also just plain interesting.
Luna Press send out a free calendar to indigent
prisoners who write and request a calendar. I've gotten
one the past two years. That's very nice and generous of
them.
If you do order one, please let them know that an inmate
who has received their free calendar referred you and please
thank them. Contact them at: THELUNAPRESS.COM.
Well, we've been on this latest full lockdown for a week
now. If I remember, I'm going to include a copy of the
memo the Warden put out. For the record, we didn't get
any memo for the last full lockdown we had.
The memo states that this is "not a disciplinary lockdown."
However, as some guys in our vent were discussing
recently, they sure as hell are treating us like it is.
For example: why are we only allowed three 5-minutes
showers per week with the staff yelling at us to hurry
up? Why aren't we allowed to revalidate our MP3s
or (technically) allowed to change them (although we can
sometimes get help from the orderlies)? Why can't we
call or email our families? Why is the commissary
spending limit lowered to $50 - and, as we learned
yesterday, why are stamps + OTC meds - which don't
normally come off your spending limit - now included as
a part of that limit? The list goes on.
Today, they removed two of the phones from our phone
kiosks. We have two phone kiosks with three phones each
that are in a circle an equal distance apart. My collie
and I were assuming that they removed one phone each
as a "distancing" precaution, but that still leaves two
phones next to each other. How does this make any
sense at all? Just more of the usual BOP
idiocy.

Mon 10/19/20 5:58p
Well, we're still stuck on this full lockdown. I'm
not surprised. I have a feeling this one will last for
a while.
I was told that the guy who died was in C-South,
which is across from us. We're separated by a hallway
that connects the two wings of the building, and staff
offices are in that hallway.
Our cell is the closest cell to that hall. We've seen
COs go over there with "full gear," which included a face
shield over their masks + something like a hospital gown
over their clothes.
However, we've seen COs going over without "full
gear" (like when our CO goes over there to "count") and
staff keep walking thru our unit from that unit to exit -
even though that unit has its own exit. That's not
real thrilling.
I've mentioned my estranged friend Pam in the past,
so I thought I'd mention that I heard from her. I've
sent her b-day cards the past two years in the hope that
I would hear from her (her b-day is ten days before
mie). Well, this year she sent me a card + a
letter. She said she's up for being friends again. I
cried some and wrote her back to tell her how much
I'd missed her. I really hope we can get back to
our old friendship. We met in 1985. She's more like
family to me than anyone.
Nick and I are getting along OK. Some days are
better than others. He has both good points and bad.
He still has diarrhea of the mouth, but since his family
sent him some books I have been able to read some -
he still treats reading like it's a chore.
He can also be immature and won't listen to anything
one says. He's constantly talking about calories +
fasting (he goes on 24-, 48- or even 72-hour fasts. Then
he pigs out + then takes a laxative to "shit out all the
food. i keep telling him that's not good for you, but
does he listen?), or the other places (prisons) he's been to.
Also... he is dumb as a box of rocks. Literally.
Rocks. I had a book with pictures of Britain's Royal
family + he said, "So, these are the people who run
Australia?" Umm... no. (Yes, I do know that
Australia is a member of the Commonwealth +
recognizes the Queen as their monarch. I also
know that he has no clue what that means).
We also had an argument recently 'cause he
didn't believe that the Earth spins in space. he
thinks the sun + everything else spins around while
the Earth is still.
His reasoning? Because he doesn't feel it spin;
because he's never seen any evidence/film of it
spinning; and because we say "sunrise" and "sunset,"
so it must be the sun moving.
Yes, I did verify that he wasn't kidding + that
he was serious. I couldn't believe it either. I
finally had to end that conversation 'cause I couldn't
take it.
On the plus side, he can be nice and generous
(he had his family buy two books for me that I wanted),
and we have some fun together.
Still, I do have my limits.
He only has a year left (he got a very short
sentence which is unusual), and we might manage to
stay cellies till he leaves. Maybe.
Please say a prayer that they find a vaccine/care
for COVID so we all can get back to normal.
Until next time, I wish you...
Love + Blessings

Effective Wednesday, October 7, 2020, FCC Petersburg Medium will reinstitute
movement modifications outlined in the initial COVID-19 Modified Operations Plan.
Inmates will remain in their respective housing unit's cell until otherwise informed. All
meals will be delivered and issued to the inmate population inside the housing units. In
addition, daily symptom checks and medication administration will be provided by
Health Services staff.

As this is not a disciplinary lockdown, inmates will still be able to purchase commissary
items, with a $50 maximum spending limit and showers will be conducted Monday,
Wednesday and Friday. The inmate population will continue to receive a hot meal for
breakfast, a hot meal for lunch, and a bag meal for dinner.

Staff and inmates are to continue adhering to the CDC's guidelines, including social
distancing of six (6) feet, wearing appropriate face coverings and washing hands
frequently.

Any questions should be directed to Correctional Services.