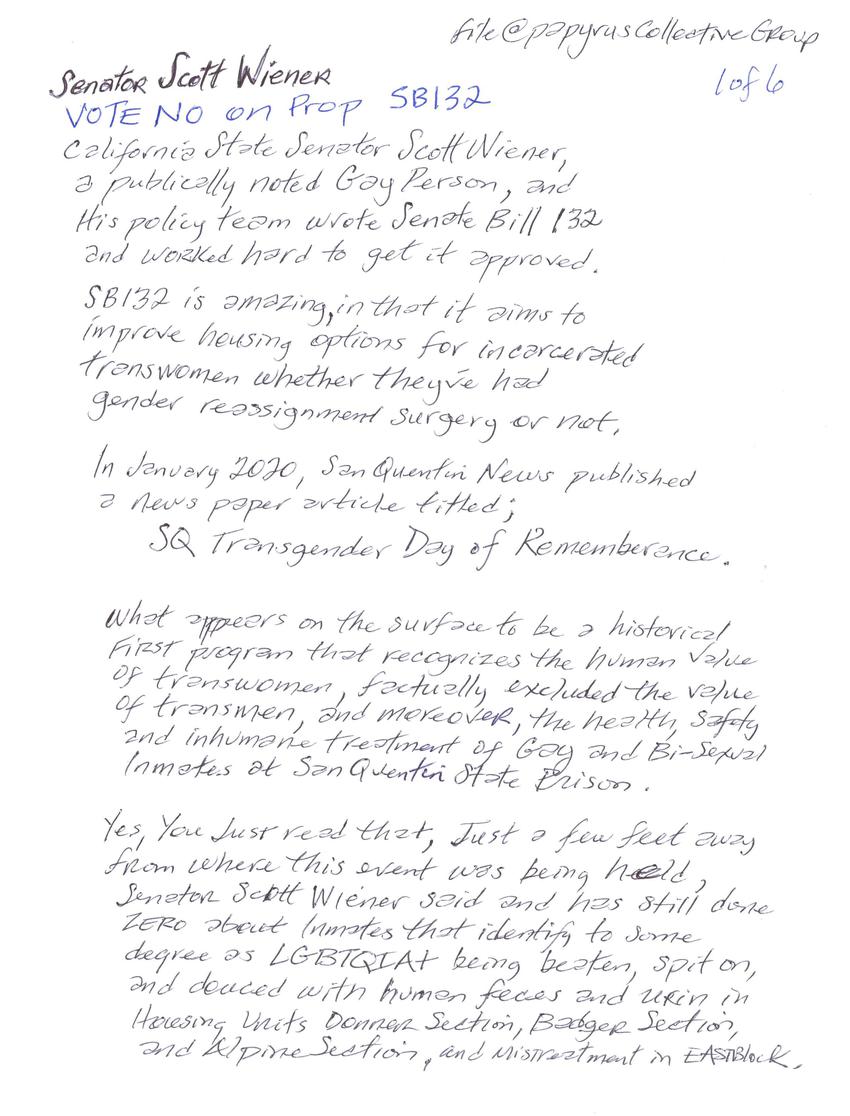 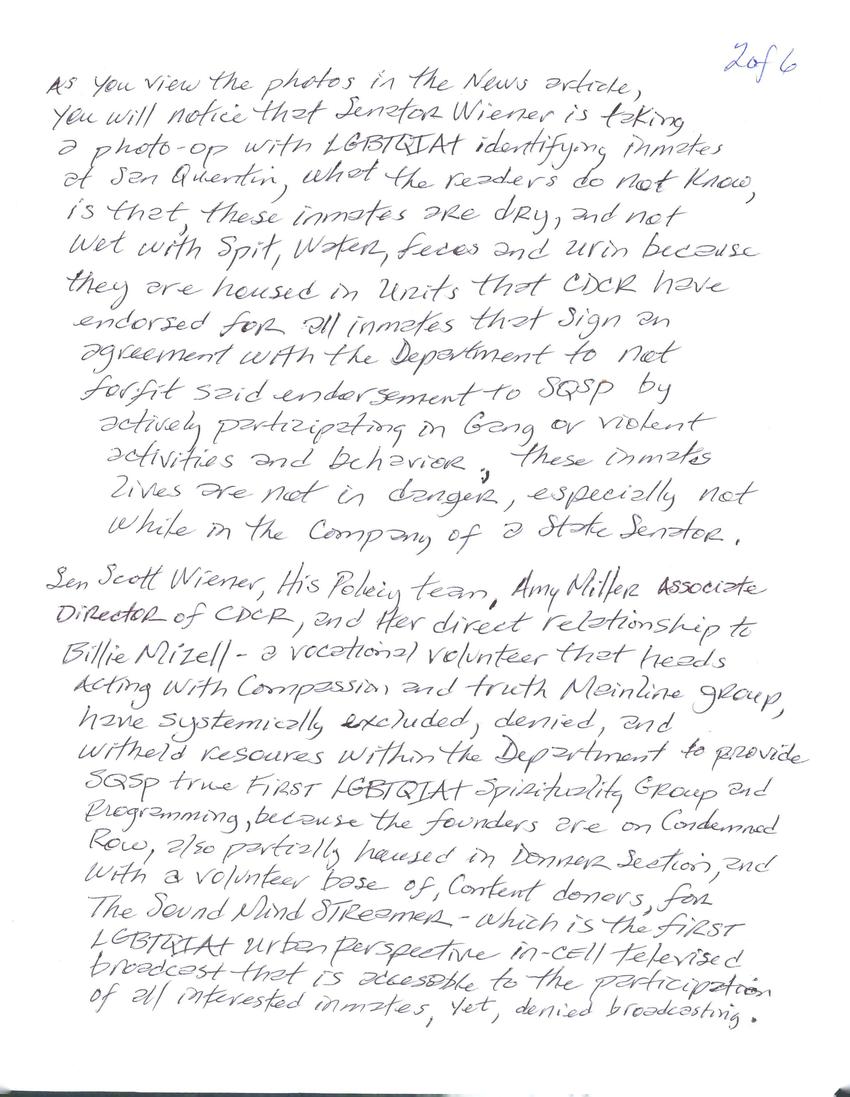 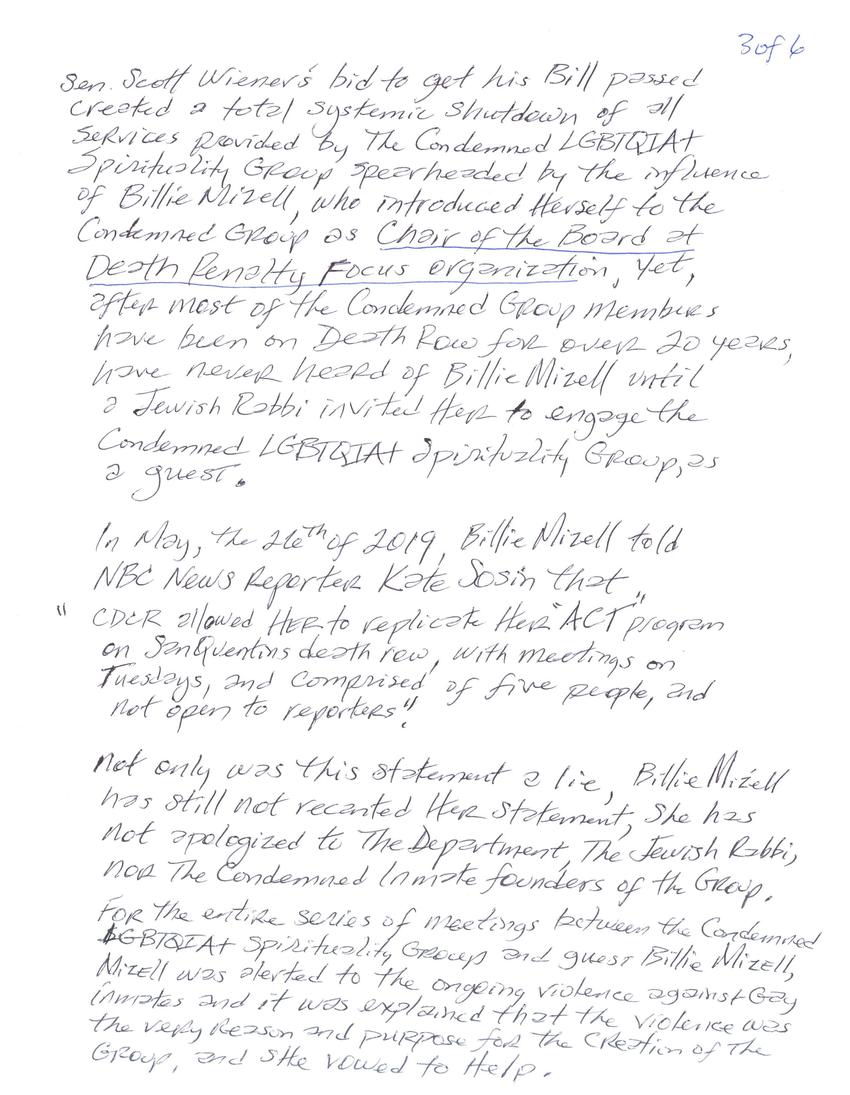 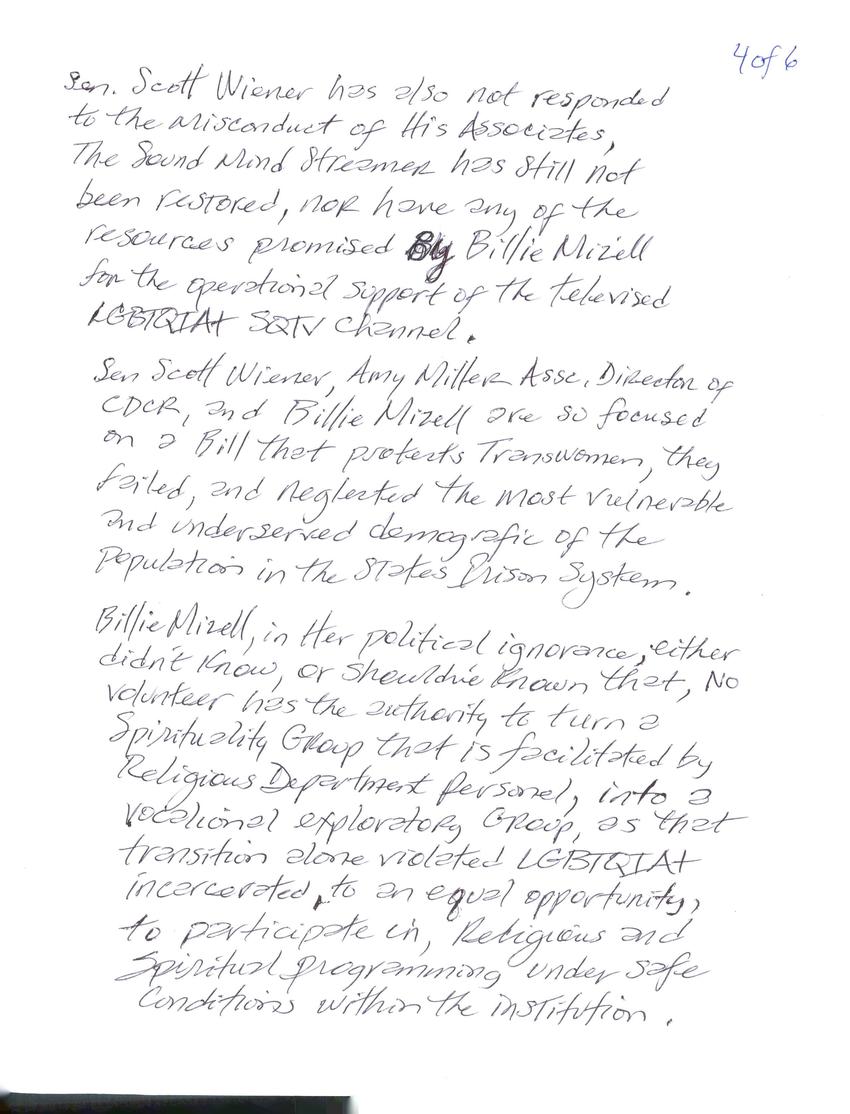 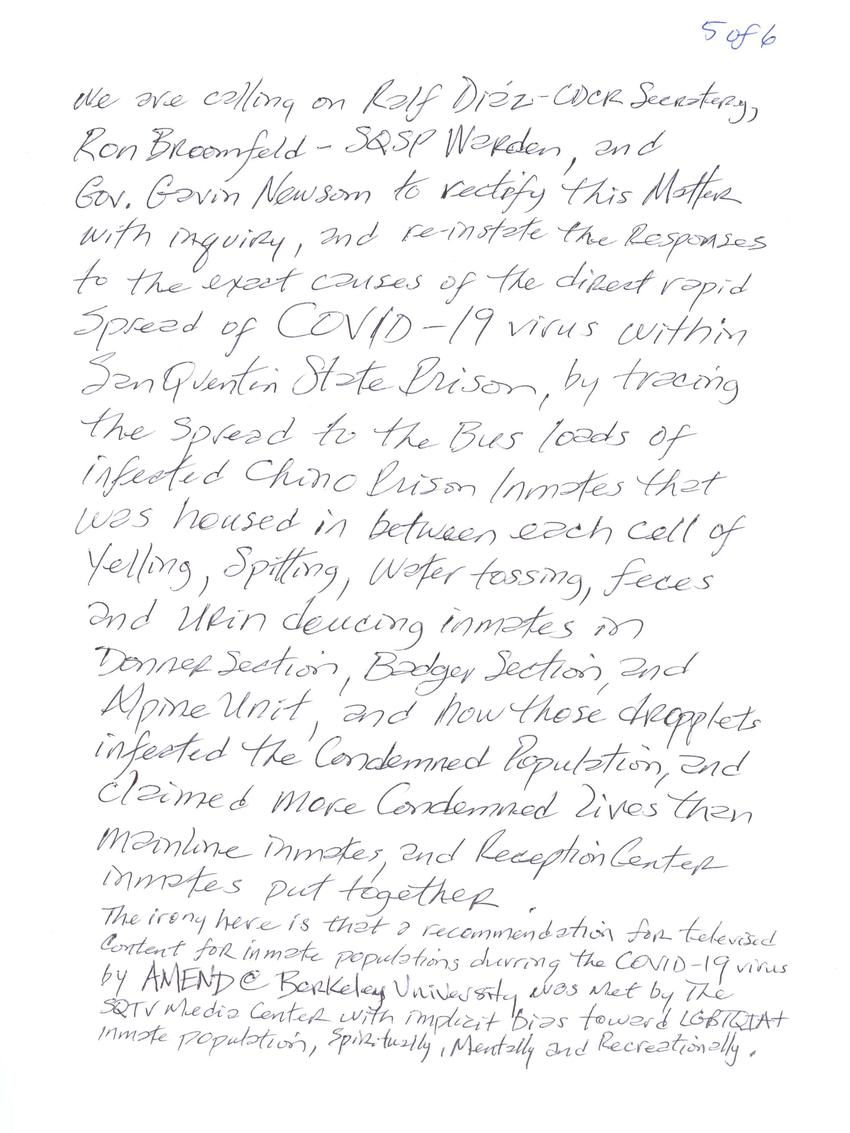 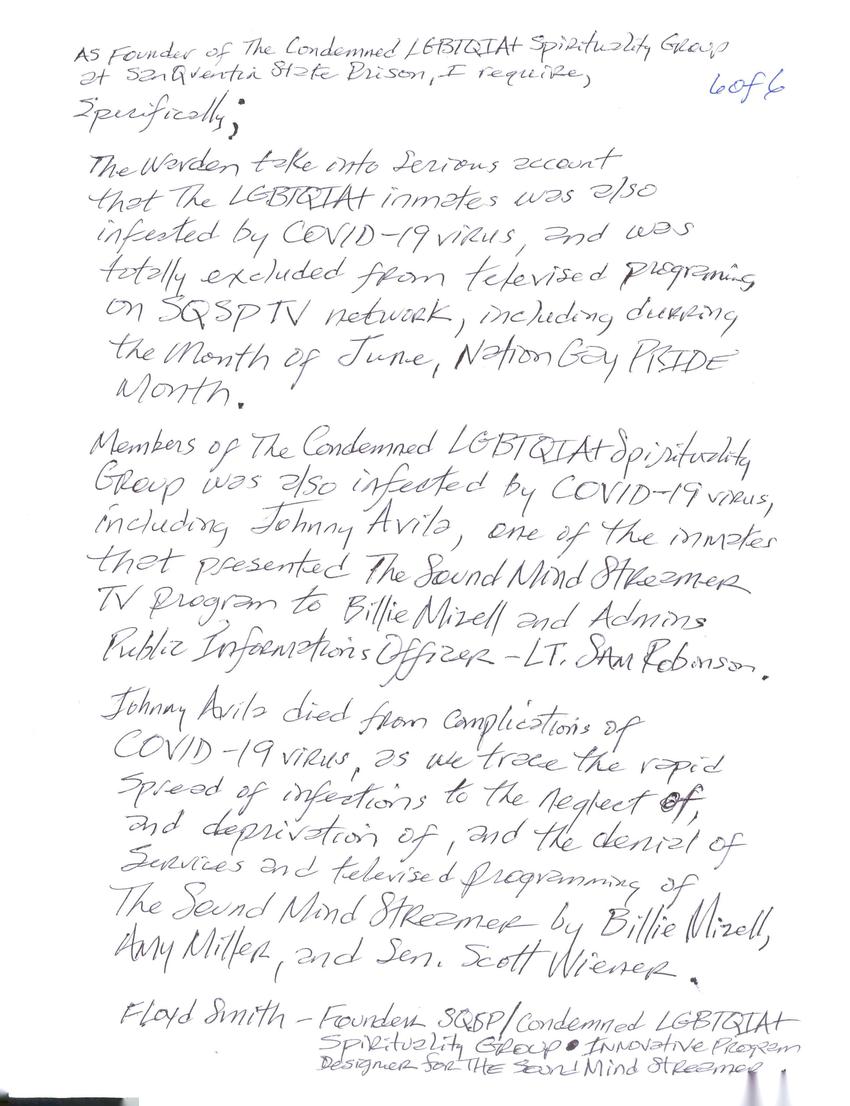 California State Senator Scott Wiener, a publically noted gay person, and his policy team wrote Senate Bill 132 and worked hard to get it approved. SB132 is amazing, in that it aims to improve housing options for incarcerated transwomen, whether they've had gender reassignment surgery or not.

What appears on the surface to be a historical first program that recognizes the human value of transwomen, factually excluded the value of transmen, and moreover, the health, safety, and inhumane treatment of gay and bisexual inmates at San Quentin State Prison.

Yes, you just read that, just a few feet away from where this event was being held, Senator Scott Wiener said and has still done ZERO about inmates that identify to some degree as LGBTQIA+ being beaten, spit on, and doused with human feces and urine in Housing Units Donner Section, Badger Section, and Alpine Section, and mistreatment in East Block.

As you view in the photos in the news article, you will notice that Senator Wiener is taking a photo-op with LGBTQIA+ identifying inmates at San Quentin, what the readers do not know, is that, these inmates are dry, and not wet with sput, water feces, and urine because they are housed in units that CDCR have enforced for all inmates that sign an agreement with the Department to not forfeit said endorsement to SQSP by actively participating in gang or violent activities and behavior; these inmates lives are not in danger, especially not while in the company of a state senator.

Sen. Scott Wiener, his Policy Team, Amy Miller, Associate Director of CDCR, and her direct relationship to Billie Mizell- a vocational volunteer that heads Acting With Compassion and Truth Mainline Group, have systematically excluded, denied, and withheld resources within the Department to provide SQSP true First LGBTQIA+ Spirituality Group and Programming, because the founders are on Condemned Row, also partially housed in Donner Section, and with a volunteer base of, content donors, for The Sound Mind Streamer- which is the first LGBTQIA+ urban perspective in-cell televised broadcast that is accessible to the participation of all interested inmates, yet denied broadcasting.

In May, the 26th if 2019, Billie Mizell told NBC News Reporter Kate Sosin that "CDCR allowed her to replicate her 'ACT' program on San Quentin's death row, with meetings on Tuesdays, and comprised of five people, and not open to reporters."

Not only was this statement a lie, Billie Mizell has still not recanted her statement, she has not apologized to The Department, the Jewish rabbi, nor The Condemned Inmate founders of the group. For the entire series of meetings between the Condemned LGBTQIA+ Spirituality Group and guest Billie Mizell, Mizell was alerted to the ongoing violence against gay inmates and it was explained that the violence was the very reason and purpose for the creation of the group, and she vowed to help.

Sen. Scott Wiener has also not responded to the misconduct of his associates, The Sound Mind Streamer has still not been restored, nor have any of the resources promised by Billie Mizell for the operational support of the televised LGBTQIA+ SQTV channel.

Sen. Scott Wiener, Amy Miller, Assc. Director of CDCR, and Billie Mizell are so focused on a bill that protects transwomen, they failed, and neglected the most vulnerable and underserved demographic of the population in the state's prison system.

Billie Mizell, in her political ignorance, either didn't know or should've known that no volunteer has the authority to turn a spirituality group that is facilitated by Religious Department personnel, into a vocational exploratory group, as that transition alone violated LGBTQIA+ incarcerated, to an equal opportunity, to participate in, religious and spiritual programming under safe conditions within the institution.

We are calling on Ralf Diaz- CDCR Secretary, Ron Broomfeld-SQSP Warden, and Gov. Gavin Newsom to rectify this matter with inquiry, and reinstate the responses to the exact causes of the direct rapid spread of COVID-19 virus within San Quentin State Prison, by tracing the spread to the bus loads of infected Chino prison inmates that was housed in between each cell of yelling, spitting, water tossing, feces and urine dousing inmates in Donner Section; Badger Section; and Alpine Unit, and how those droplets infected the Condemned Population, and claimed more Condemned lives than Mainline Inmates. and Reception Center Inmates put together.

The irony here is that a recommendation for televised content for inmate populations during the COVID-19 virus by AMEND @ Berkely University, was met by The SQTV Media Center with implicit bias toward LGBTQIA+ inmate population, spiritually, mentally, and recreationally.

As Founder of The Condmned LGTBQIA+ Spirituality Group at San Quentin State Prison, I require, specifically; the Warden take into serious account that the LGTBQIA+ were also infected by COVID-19 virus, and was totally excluded from televised programming on SQSPTV network, including during the month of June, National Gay Pride Month.

Johnny Avila died from complications of COVID-19 virus, as we trace the rapid spread of infections to the neglect of, and deprivation of, and the denial of services and televised programming of The Sound Mind Streamer by Billie Mizell, Amy Miller, and Sen. Scott Wiener.