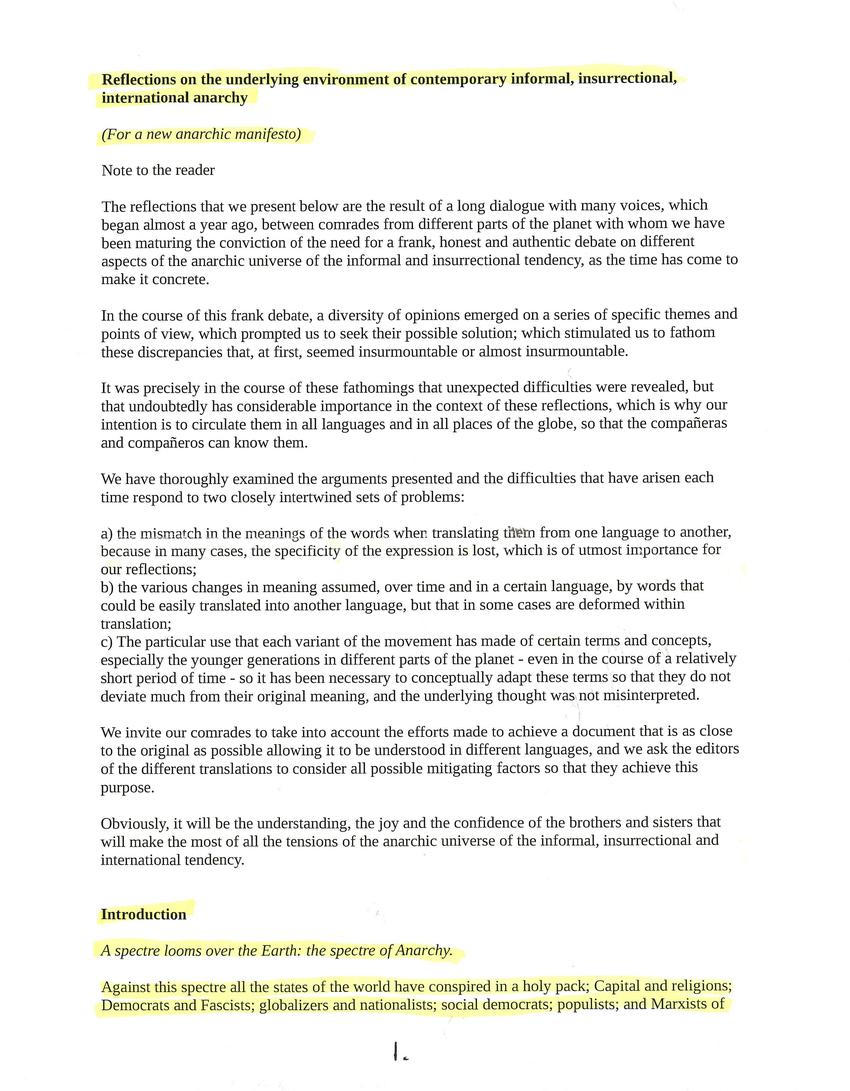 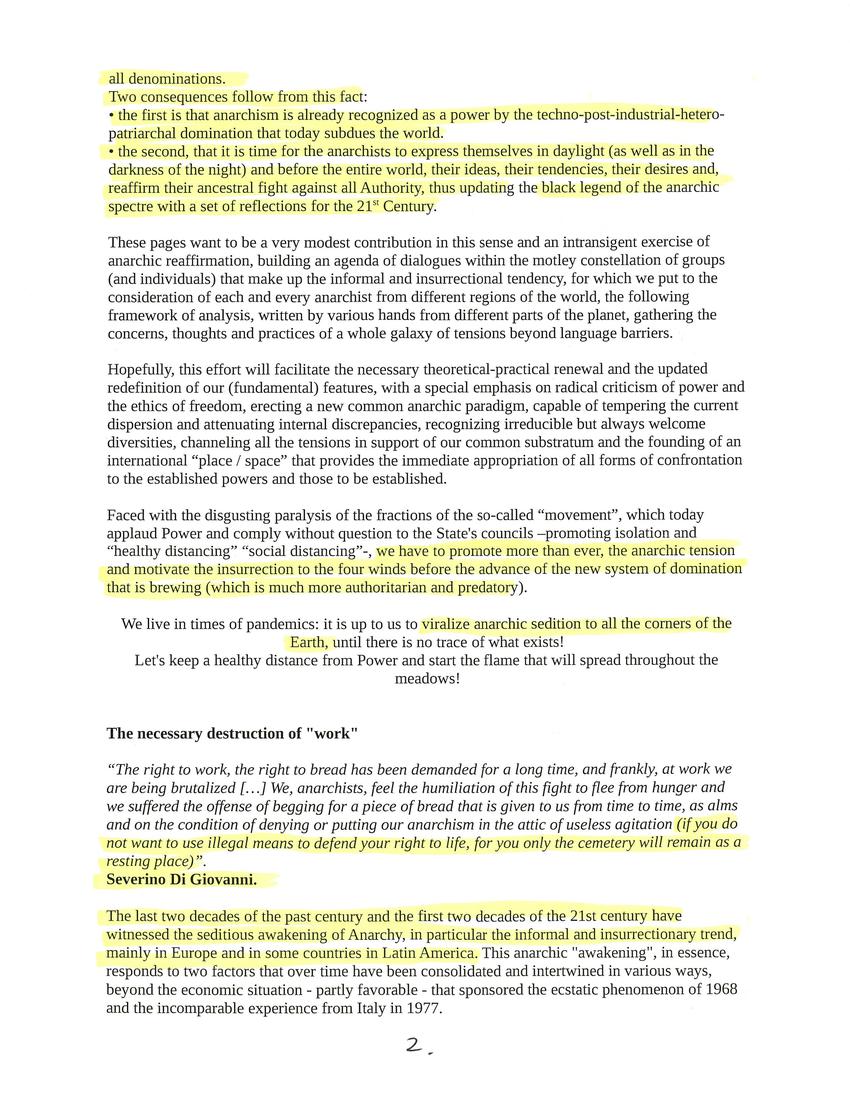 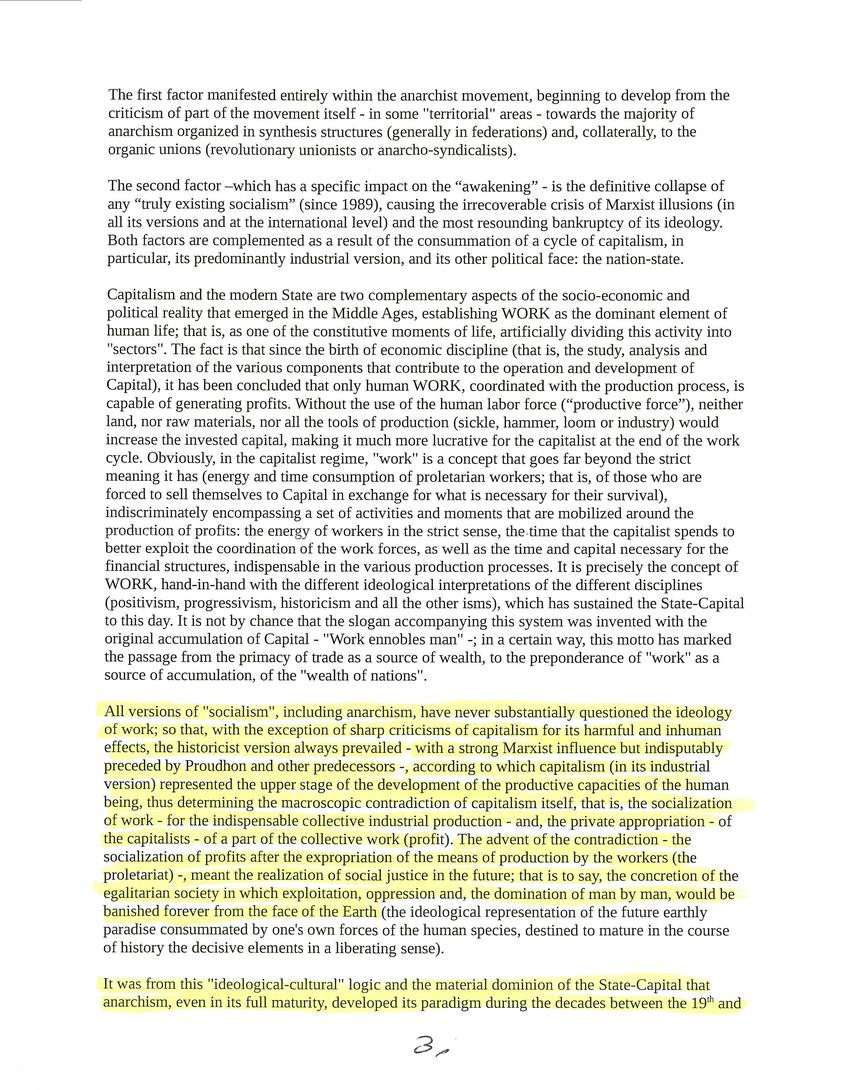 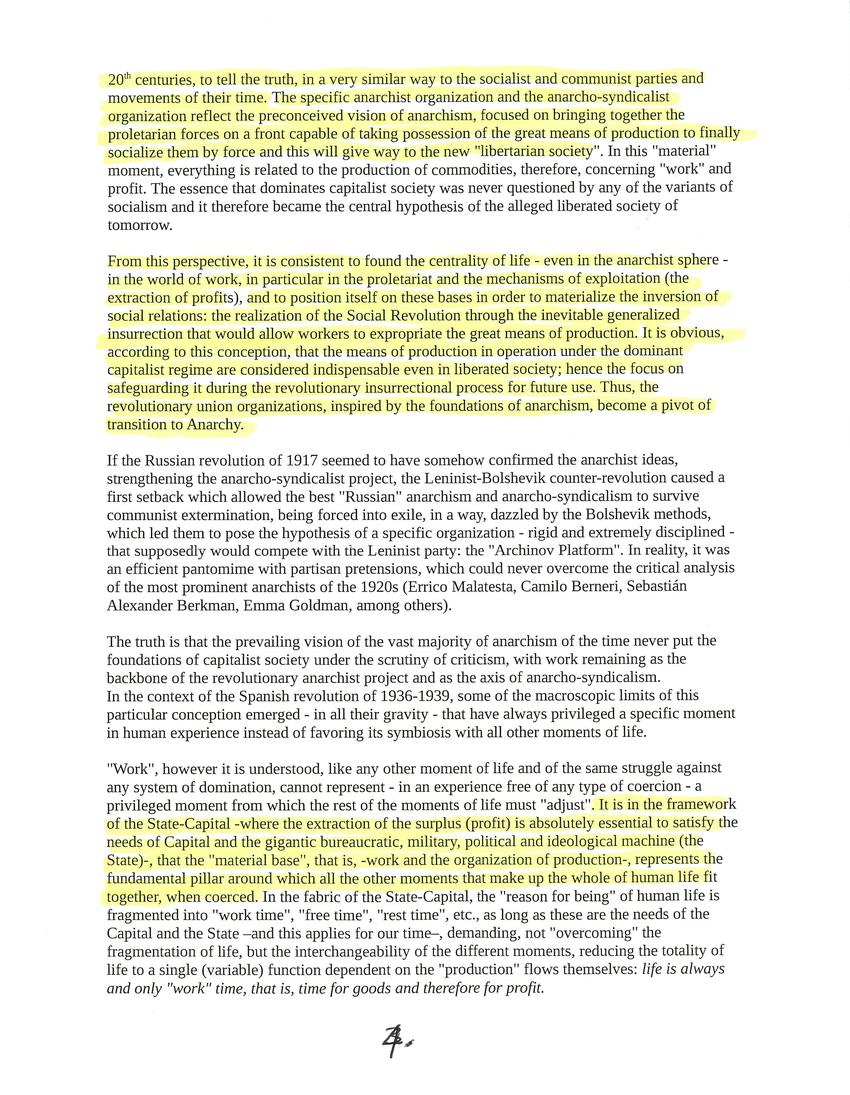 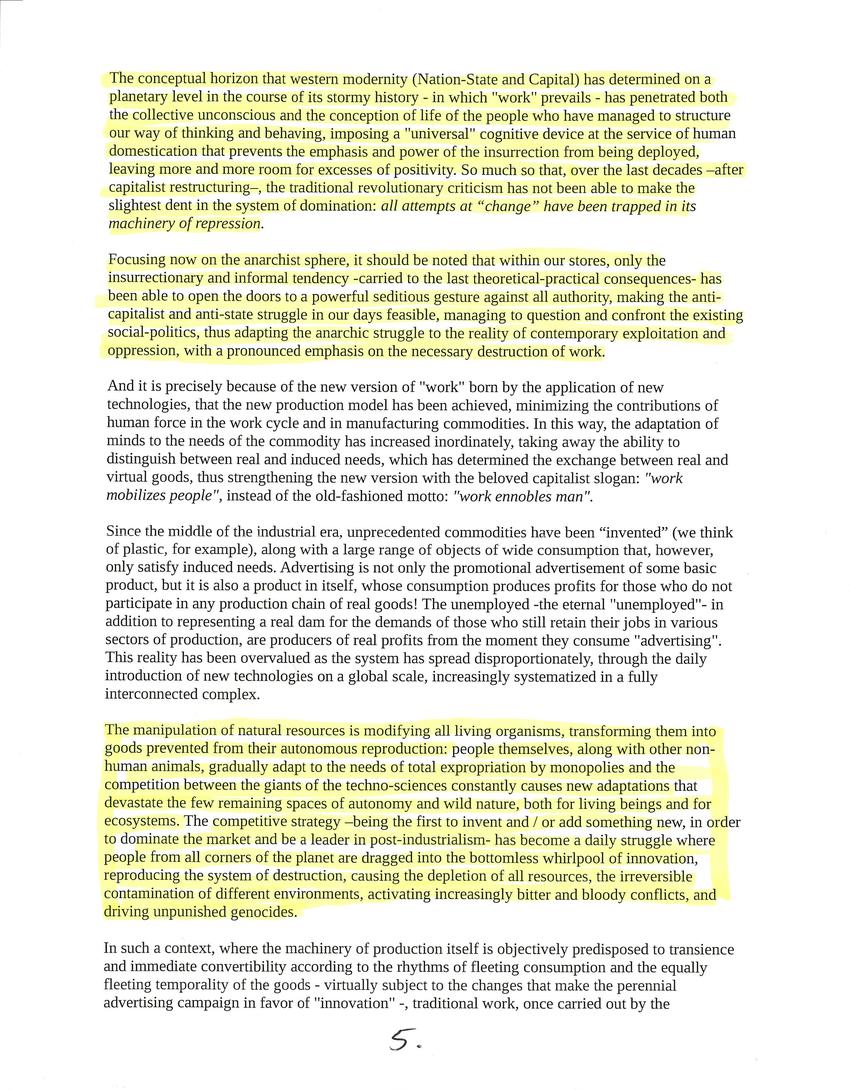 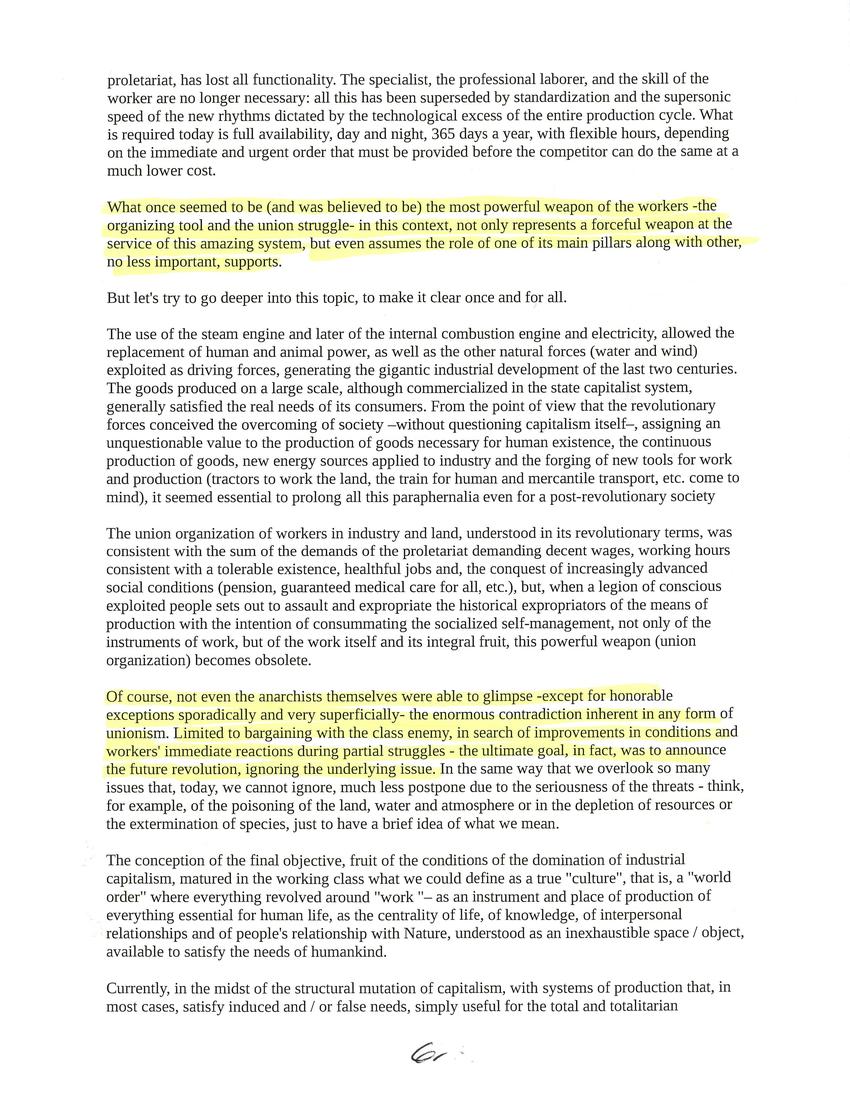 (For a new anarchic manifesto)

Note to the reader

The reflections that we present below are the result of a long dialogue with many voices, which began almost a year ago, between comrades from different parts of the planet with whom we have been maturing the conviction of the need for a frank, honest and authentic debate on different aspects of the anarchic universe of the informal and insurrectional tendency, as the time has come to make it concrete.

In the course of this frank debate, a diversity of opinions emerged on a series of specific themes and points of view, which prompted us to seek their possible solution; which stimulated us to fathom these discrepancies that, at first, seemed insurmountable or almost insurmountable.

It was precisely in the course of these fathoming that unexpected difficulties were revealed, but that undoubtedly has considerable importance in the context of these reflections, which is why our intentions is to circulate them in all languages and in all places of the globe, so that the compañeras and compañeros can know them.

We have thoroughly examined the arguments presented and the difficulties that have arisen each time respond to two closely intertwined sets of problems:

a) the mismatch in the meanings of the words when translating them from one language to another, because in my cases, the specificity of the expression is lost, which is of the utmost importance for our reflections;
b) the various changes in meaning assumed, over time and in certain language, by words that could be easily translated into another language, but that in some cases are deformed within translation;
c) the particular use that each variant of the movement has made of certain terms and concepts, especially the younger generations in different parts of the planet - even in the course of a relatively short period of time - so it has been necessary to conceptually adapt these terms so that they do not deviate much from their original meaning, and the underlying thought was not misinterpreted.

We invite out comrades to take into account the efforts made to achieve a document that is as close to the original as possible allowing it to be understood in different languages, and we ask the editors of the different translations to consider all possible mitigating factors so that they achieve this purpose.

Obviously, it will be the understanding, the joy and the confidence of the brothers and sisters that will make the most of all the tensions of the anarchic universe of the informal, insurrectional and international tendency.

A spectre looms over the Earth: the spectre of Anarchy.

Against this spectre all the states of the world have conspired in a holy pack; Capital and religions; Democrats and Fascists; globalizers and nationalists; social democrats; populists; and Marxists of

all dominations.
Two consequences follow from this fact:
- the first is that anarchism is already recognized as a power by the techno-post-industrial-hetero-patriarchal domination that today subdues the world.
- the second, that it is time for the anarchists to express themselves in daylight (as well as in the darkness of the night) and before the entire world, their ideas, their tendencies, their desires and, reaffirm their ancestral fight against all Authority, thus updating the black legend of the anarchic spectre with a set of reflections for the 21st Century.

These pages want to be a very modest contribution in this sense and an intransigent exercise of anarchic reaffirmation, building an agenda of dialogues within the motley constellation of groups (and individuals) that make up the informal and insurrectional tendency, for which we put to the consideration of each and every anarchist from different regions of the world, the following framework of analysis, written by various hands from different parts of the planet, gathering the concerns, thoughts and practices of a whole galaxy of tensions beyond language barriers.

Hopefully, this effort will facilitate the necessary theoretical-practical renewal and the updated redefinition of our (fundamental) features, with a special emphasis on radical criticism of power and the ethics of freedom, erecting a new common anarchic paradigm, capable of tempering the current dispersion and attenuating internal discrepancies, recognizing irreducible but always welcome diversities, channeling all the tensions in support of our common substratum and the founding of an international "place / space" that provides the immediate appropriation of all forms of confrontation to the established powers and those to be established.

Faced with the disgusting paralysis of the fractions of the so-called "movement", which today applaud Power and comply without question to the State's councils -promoting isolation and motivate the insurrection to the four winds before the advance of the new system of domination that is brewing (which is much more authoritarian and predatory).

We live in times of pandemics: it is up to us to viralize anarchic sedition to all corners of the
Earth, until there is no trace of what exists!
Let's keep a healthy distance from Power and start the flame that will spread throughout the
meadows!

The necessary destruction of "work"

"The right to work, the right to bread has been demanded for a long time, and frankly, at work we are being brutalized [...] We, anarchists, feel the humiliation of this fight to flee from hunger and we suffered the offense of begging for a piece of bread that is given to us from time to time, as alms and on the condition of denying or putting our anarchism in the attic of useless agitation (if you do not want to use illegal means to defend your right to life, for you only the cemetery will remain as a resting place)".
Severino Di Giovanni.

The last two decades of the past century and the first two decades of the 21st century have witnessed the seditious awakening of Anarchy, in particular the informal and insurrectionary trend, mainly in Europe and in some countries in Latin America. This anarchic "awakening", in essence, responds to two factors that over time have been consolidated and intertwined in various ways, beyond the economic situation - partly favorable - that sponsored the ecstatic phenomenon of 1968 and the incomparable experience from Italy in 1977.

The first factor manifested entirely within the anarchist movement, beginning to develop from the criticism of part of the movement itself - in some "territorial" areas - towards the majority of anarchism organized in synthesis structures (generally in federations) and, collaterally, to the organic unions (revolutionary unionists or anarchs-syndicalists).

The second factor -which has a specific impact on the "awakening" - is the definitive collapse of any "truly existing socialism" (since 1989) causing the irrecoverable crisis of Marxists illusions 9in all its versions and at the international level) and the most resounding bankruptcy of its ideology. Both factors are complemented as a result of the consummation of a cycle of capitalism, in particular, its predominately industrial version, and its other political face: the nation-state.

Capitalism and the modern State and two complementary aspects of the socio-economic and political reality that emerged in the Middle Ages, establishing WORK as the dominant element of human life; that is, as one of the constitutive movements of life, artificially dividing this activity into "sectors". The fact is that since the birth of economic discipline (that is, the study, analysis and interpretation of the various components that contribute to the operation and development of Capital), it has been concluded that only human WORK, coordinated with the production process, is capable of generating profits. Without the use of the human labor force ("productive force"), neither land nor raw materials nor all the tools of production (sickle, hammer, loom or industry) would increase the invested capital, making it much more lucrative for the capitalist at the end of the work cycle. Obviously, in the capitalist regime, "work" is a concept that goes far beyond the strict meaning it has (energy and time consumption of proletarian workers; that is, of those who are forced to sell themselves to Capital in exchange for what is necessary ro their survival), forced to sell themselves to Capital in exchange for what is necessary for their survival), indiscriminately encompassing a set of activities and moments that are mobilized around the production of profits: the energy of workers in the strict sense, the time that the capitalist spends to better exploit the coordination of the work forces, as well as the time and capital necessary for the financial structures, indispensable in the various production processes. It is precisely the concept of WORK, hand-in-hand with the different ideological interpretations of the different disciplines (positivism, progressivism, historicism and all the other isms), which has sustained the State-Captial to this day. It is not by chance that the slogan accompanying this system was invented with the original accumulation of Capital - "Work ennobles man" -; in a certain way, this motto has marked the passage from the primacy of trade as a source of wealth, to the preponderance of "work" as a source of accumulation, of the "wealth of nations".

All versions of "socialism", including anarchism, have never substantially questioned the ideology of work; so that, with the exception fo sharp criticisms of capitalism for its harmful and inhuman effects, the historicist version always prevailed - with a strong Marxist influence but indisputable preceded by Proudhon and other predecessors -, according to which capitalism (in its industrial version) represented the upper stage of the development of the productive capacities of the human being, thus determine the macroscopic contradiction of capitalism itself, that is, the socialization of work - for the indispensable collective industrial production - and, the private appropriation - of the capitalists - of a part of the collective work (profit). The advent of the contradiction - the socialization of profits after the expropriation of the means of production by the workers (the proletariat) -, meant the realization of social justice in the future; that is to say, the concentration of the egalitarian society in which exploitation, oppression and, the domination of may by man, would be banished forever from the face of the Earth (the ideological representation of the future earthly paradise consummated by one's own forces of the human species, destined to mature in the rouse of history the decisive elements in a liberating sense).

It was from this "ideological-cultural" logic and the material dominion of the State-Capital that anarchism, even in its full maturity, developed its paradigm during the decades between the 19th and