The Elephant, the Donkey, and the Chauvinist Pig 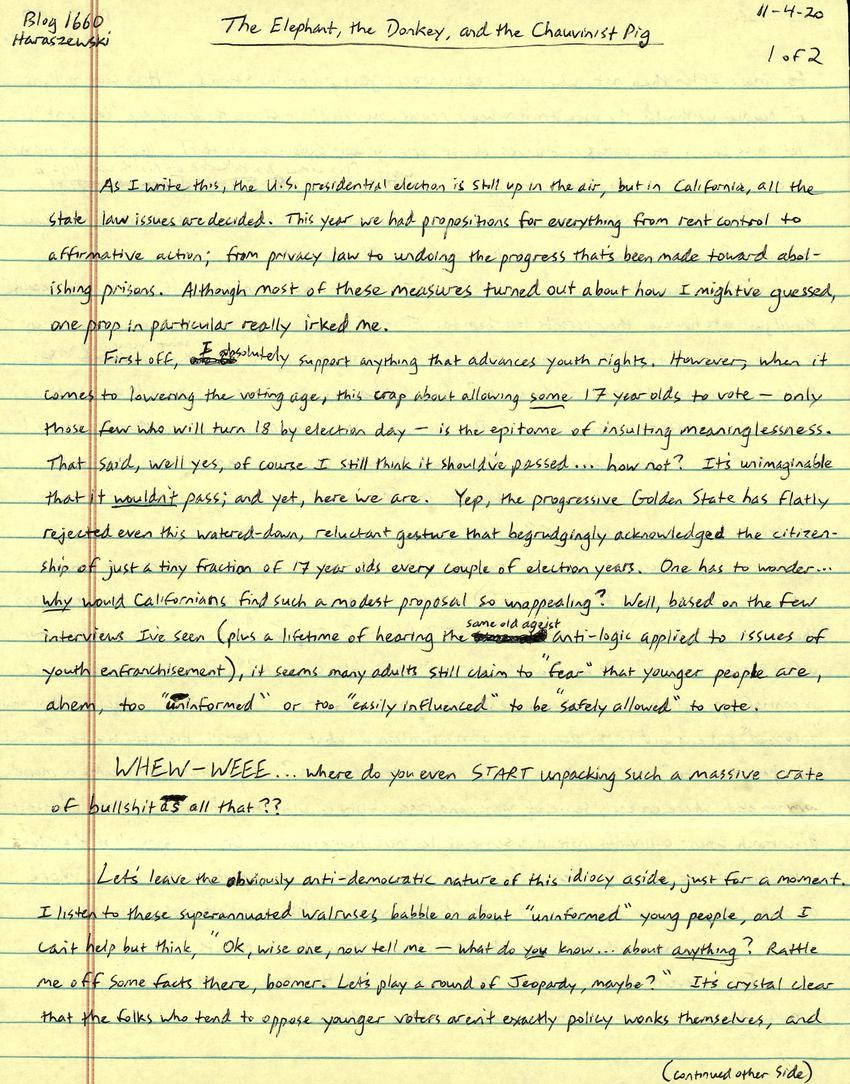 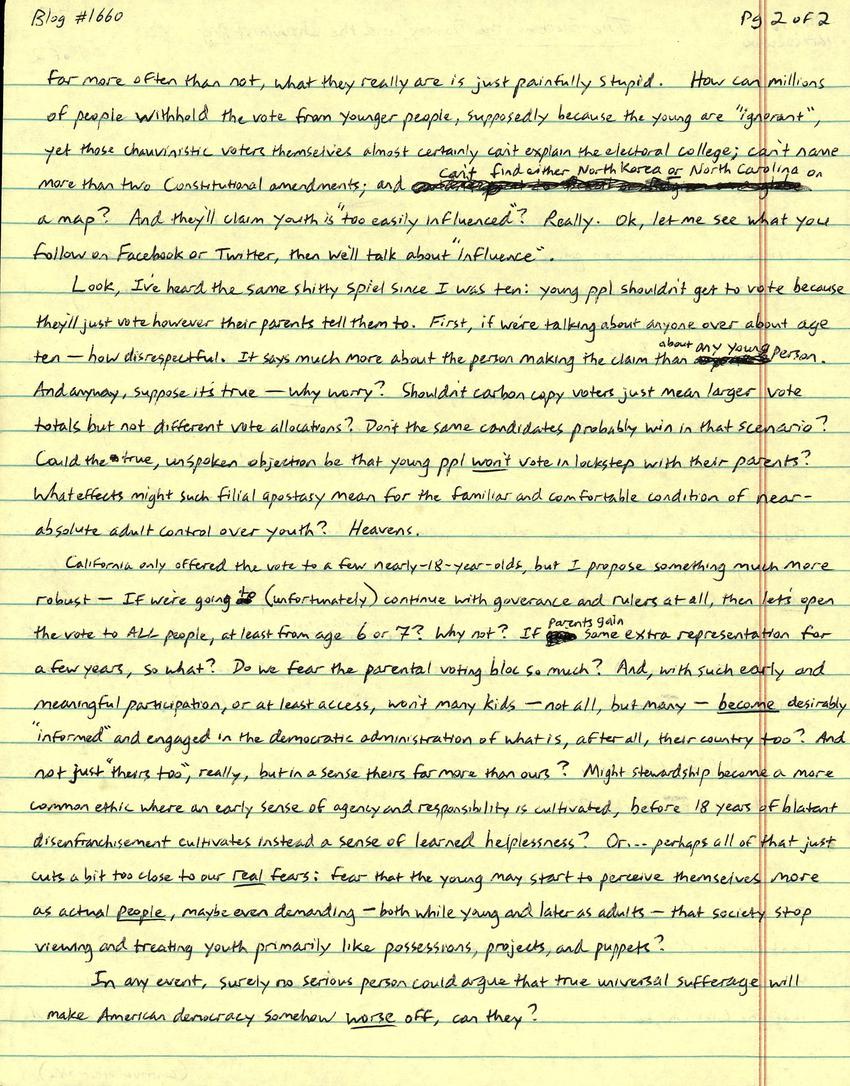 The Elephant, The Donkey, and the Chauvinist Pig
As I write this, the U.S. presidential election is still up in the air, but in California, all the state law issues are decided. This year we had propositions for everything from rent control to affirmative action; from privacy law to undoing the progress thatś been made towards abolishing prisons. Although most of these measures turned out how I might've guessed, one prop in particular really irked me.
First off, I absolutely support anything that advances youth rights. However, when it comes to lowering the voting age, this crap about allowing some 17-year-olds to vote- only those few who will turn 18 by election day- is the epitome of insulting meaninglessness. That said, well yes, of course, I still think it should've passed...How not? It's unimaginable that I wouldn't pass; and yet, here we are. Yep, the progressive Golden State has flatly rejected even this watered down, reluctant gesture that begrudgingly acknowledged the citizenship of just a tiny fraction of 17 year olds every couple of election years. One has to wonder... why would California find such a modest proposal so unappealing? Well, based on the few interviews I've seen (plus a lifetime of hearing the same old ageist anti-logic applied to issues of youth enfranchisement), it seems many adults still claim to "fear" that younger people are, ahem, too "uniformed" or to "easily influenced" to be "safely allowed" to vote.
WHEW-WEE...where do you even START unpacking such a massive crate of bullshit as that??
Let's leave the obviously anti-democratic nature of this idiocy aside, just for a moment. I listen to these superannuated walruses babble on about "uninformed" young people, and I can't help but think, "OK, wise one, now tell me- what do you know... about anything? Rattle me off some facts there, boomer. Let's play a round of Jeopardy, maybe?" It's crystal clear that the folks who tend to oppose younger voters aren't exactly policy wonks themselves, and far more often than not, what they really are is just painfully stupid. How can millions of people withhold the vote form younger people, supposedly because the young are "ignorant", yet those chauvinistic voters themselves almost certainly can't explain the electoral college; can't name more than two constitutional amendments, and can't find either North Korea or North Carolina on a map? And they'll claim youth is "too easily influenced"? Really. OK, let me see what you follow on Facebook or Twitter, then we'll talk about "influence".
Look, I've heard the same shitty special since I was ten: young people shouldn't get to vote because they'll vote however their parents tell them to. First, if we're talking about anyone ever about age ten- how disrespectful. It says much more about the person making the claim than about a young person. And anyway, suppose it's true- why worry? Shouldn't carbon copy voters just mean larger vote totals but not different vote allocations? Don't the same candidates probably win in that scenario? Could the true unspoken objection be that young people won't vote in lockstep with their parents? What effects might such filial apostasy mean for the familiar and comfortable condition of near-absolute adult control over youth? Heavens?
California only offered the vote to nearly 18-year-olds, but I propose something much more robust- If we're going to (unfortunately) continue with governance and rules at all, then let's open the vote to ALL people, at least from age 6 or 7? Why not? If parents gain some extra representation for a few years, so what? Do we fear the parental voting block so much? And with such early and meaningful participation or at least access, won't make kids-not all, but many - become desirably "informed" and engages in the democratic administration of what is, after all, their country too? And not just " theirs too", really, but in a sense of learned helplessness? Or..perhaps all of that just cuts a bit to close to out real fears; fear that the young and later may start to perceive themselves more as actual people, maybe even demanding- both while young and later as adults- that society stop viewing and treating youth primarily like possesions, projects, and puppets?
In any event, surely no serious person could argue that true universal sufferage will make American democracy somehow worse off, can they?

Thanks for writing! I finished transcribing. Your piece was very well written and you made some very good points. You made me reconsider my opinion of it and it really made me think.
I wonder if the thinking person might decide that allowing voting rights for 17 year olds would be acceptable ...with parental consent.

In California I believe you can join the military at 17 with parental consent.
There is no minimum age for marriage.
That therefore means if you marry (with parental consent) you may legally do something with your wife that would be illegal if she was your girlfriend????
If you wanted to relax and have a cigarette, that would be ok as long as you are 21, (with or without your wife) but if you are serving military then you can take that cigarette break at 18.
Of course you can't display your affection for anything in your life with alcohol in public unless you are over the age of 21, but as long as you are supervised by a person over the age of 21 you can feed a rum and coke to anyone who wants one behind closed doors.
I think what i'm trying to say, is the more States and countries try and regulate human behavior, the more ridiculous those regulations appear to be. best to set a universal age of consent for everything and be done with it!