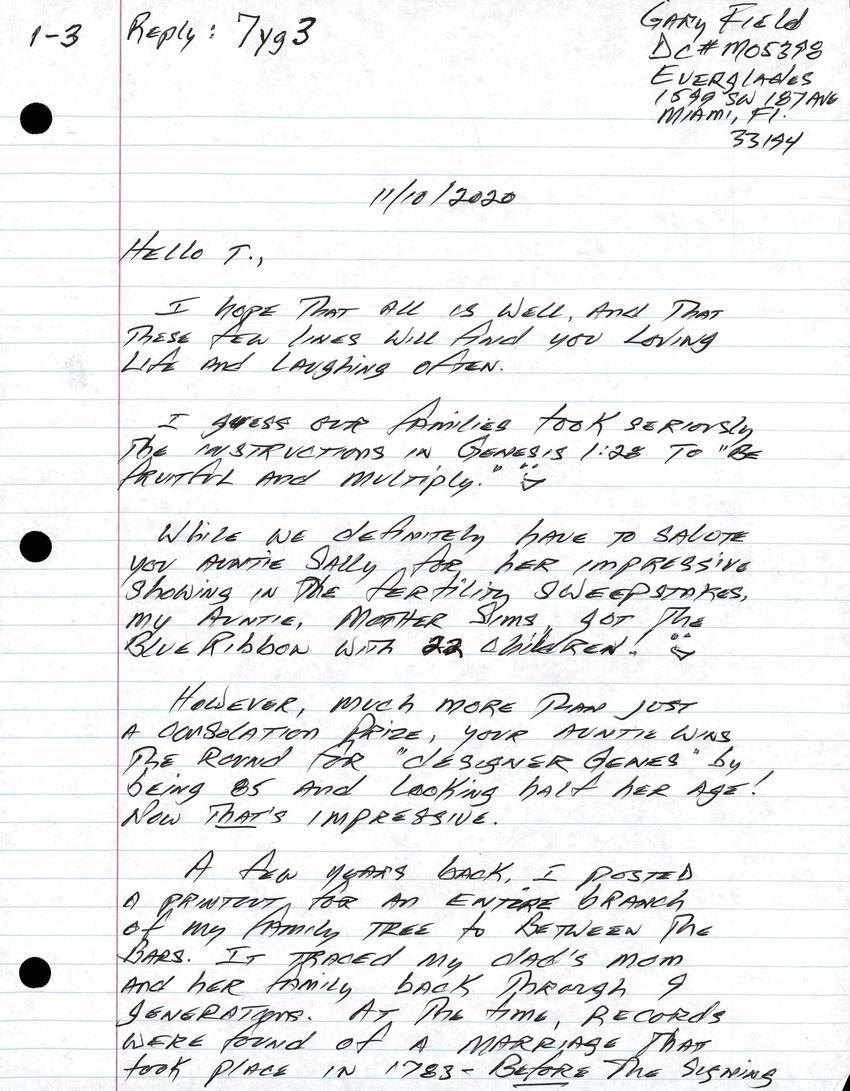 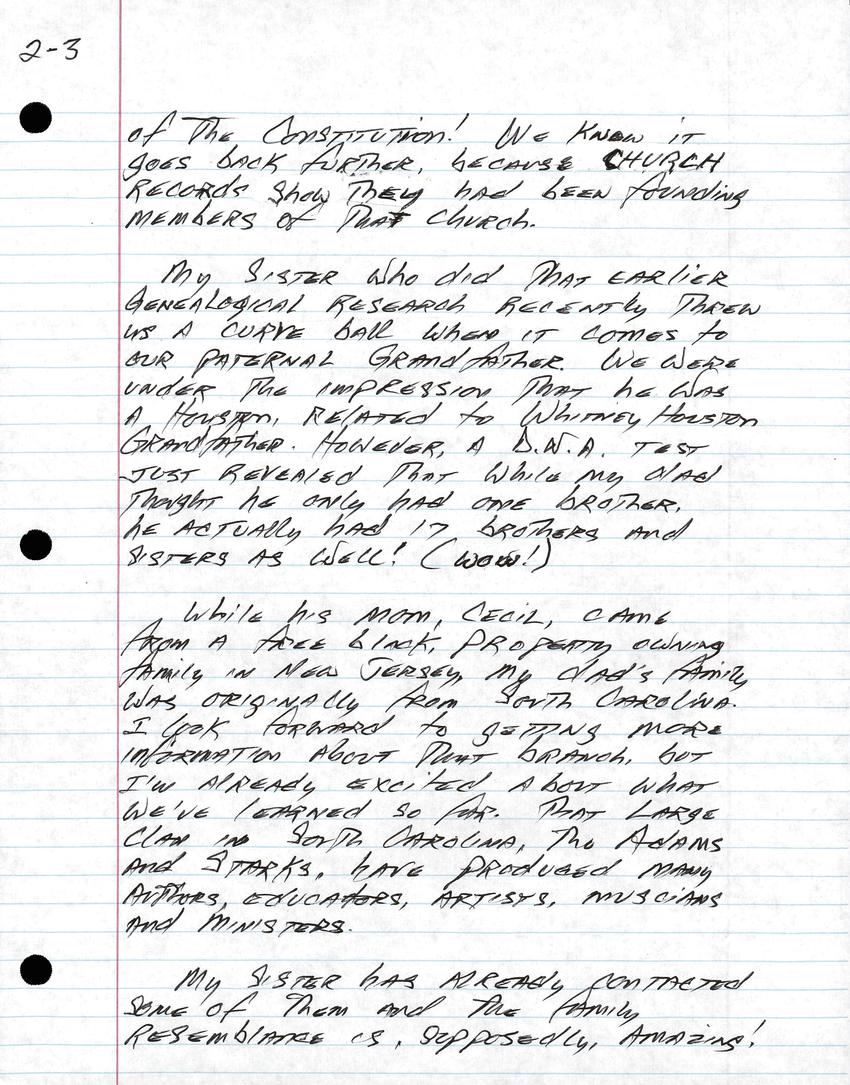 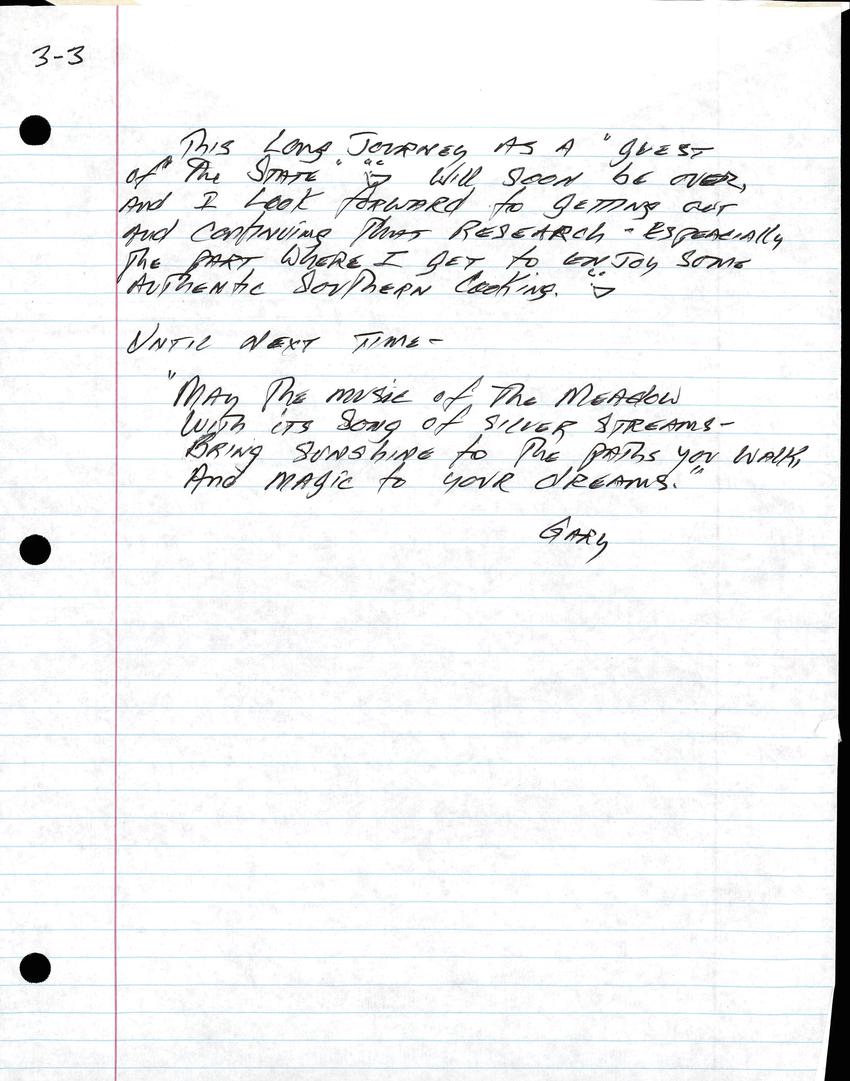 I hope that all is well, and that
these pen lines will find you loving
life and laughing often.

I guess our families took seriously
the instructions in Genesis 1:28 to "Be
fruitful and multiply." :D

However, much more than just
a consolation prize, your auntie wins
the round for "designer genes" by
being 85 and looking half her age!
Now [underlined] that's [/underlined] impressive.

A few years back, I posted
a printout for an entire branch
of my family tree to Between The
Bars. It traced my dad's mom
and her family back through 9
generations. At the time, records
were found of a marriage that
took place in 1783 - [underlined] before [/underlined] the signing

of The Constitution! We knew it
goes back further because CHURCH
RECORDS show they had been founding
members of that church.

My sister who did that earlier
genealogical research recently threw
us a curveball when it comes to our paternal grandfather. We were
under the impression that he was
a Houston, related to Whitney Houston's Grandfather. However, a DNA test just revealed that while my dad thought he only had one brother, he actually had 17 brothers and sisters as well! (wow!)

While his mom, Cecil, came from a free black property owning family in New Jersey my dad's family was originally from South Carolina. I look forward to getting more information about that branch, but I'm already excited about what we've learned so far. That large clan in South Carolina, the Adams and Starks, have produced many authors, educators, artists, musicians, and ministers.

My sister has already contacted some of them and the family resemblance is, supposedly, amazing!

This long journey as a "guest of the state" :D will soon be over, and I look forward to getting out and continuing that research - especially the part where I get to enjoy some authentic southern cooking. :D

"May the music of the meadow with its song of silver streams - bring sunshine to the paths you walk, and magic to your dreams."