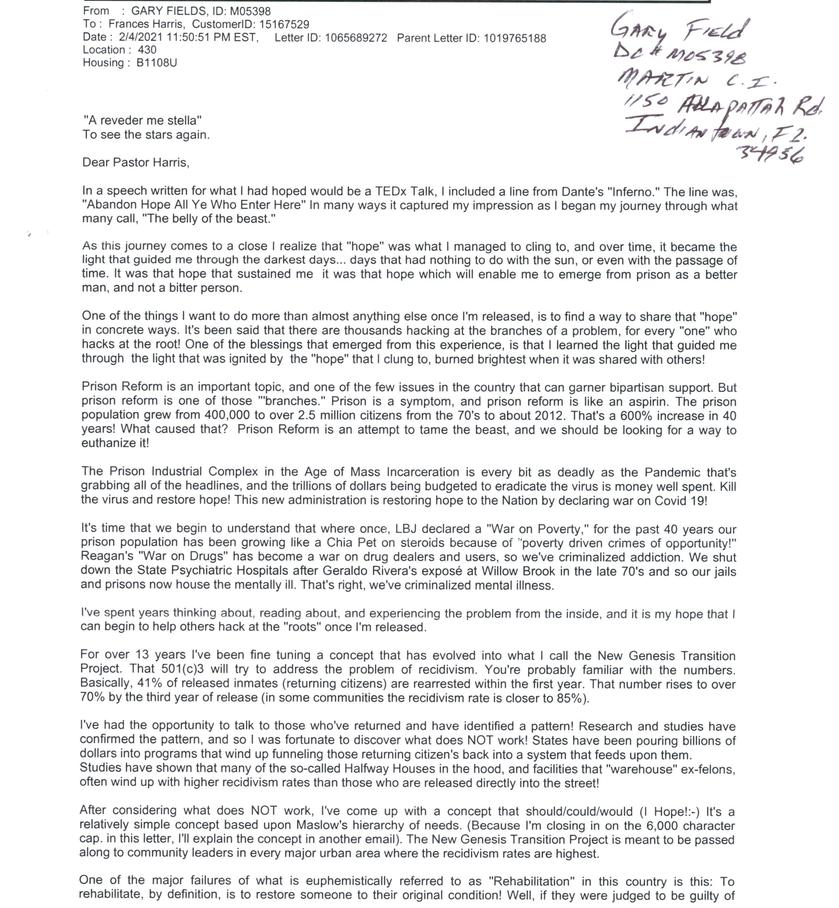 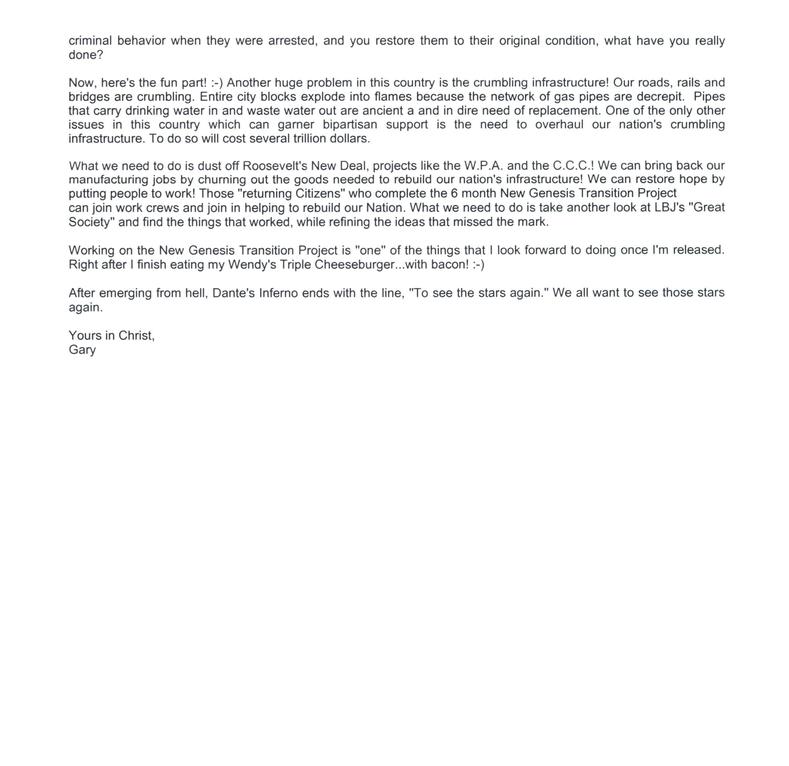 "A revered me stella"
To see the stars again.

In a speech written for what I had hoped would be a TEDx Talk, I included a line from Dante's "Inferno." The line was, "Abandon Hope All Ye Who Enter Here" In many ways it captured my impression as I began my journey through what many call, "The belly of the beast."

As this journey comes to a close I realize that "hope" was what I managed to cling to, and over time, it became the light that guided me through the darkest days... days that had nothing to do with the sun, or even with the passage of time. It was that hope that sustained me it was that hope which will enable me to emerge from prison as a better man, and not a bitter person.

One of the things I wanted to do more than ascot anything else once I'm released, is to find a way to share that "hope" in concrete ways. It's been said that there are thousands hacking at the branches of a problem, for every "one" who hacks at the root! One of the blessings that emerged form this experience, is that I learned the light that guided ,e through the light that was ignited by the "hope" that I clung to, burned brightest when it was shared with others!

Prison Reform is an important topic, and one of the few issues in the country that can garner bipartisan support. But prison reform is one of those "branches." Prison is a symptom, and prison reform is like an aspirin. The prison population grew from 400,000 to over 2.5 million citizens from the 70's to about 2012. That's a 600% increase in 40 years! What caused that? Prison reform is an attempt to tame the beast, and we should be looking for a way to euthanize it!

The Prison Industrial Complex is the Age of Mass Incarceration is every bit as deadly as the Pandemic that's grabbing all of the headlines, and the trillions of dollars being budgeted to eradicate the virus is money well spent. Kill the virus and restore hope! This new administration is restoring hope to the Nation by declaring war on Covid 19!

It'a time that we begin to understand that where once, LBJ declared a "War on Poverty," for the past 40 yers our prison population has been growing like a Chia Pet on steroids because of "poverty driven crimes of opportunity!" Reagan's "War on Drugs" has become a war on drug dealers and users, so we've criminalized addiction. We shut down the State Psychiatric Hospitals after Geraldo Rivera's exposé at Willow Brook in the late 70's and so our jails and prisons now house the mentally ill. That's right, we've criminalized mental illness.

I've spent years thinking about, reading about, and experiencing the problem from the inside, and it is my hope that I can begin to help others hack at the "roots" once I'm released.

For over 13 years I've been fine tuning a concept that has evolved into what I call the New Genesis Transition Project. That 501(c)3 will try to address the problem of recidivism. You're probably familiar with the numbers. Basically, 41% of related inmates (returning citizens) are rearrested within the first year. That number rises to over 70% by the third year of release (in some communities the recidivism rate is closer to 85%).

I've had the opportunity to talk to those who've returned and have identified a pattern! Research and studies have confirmed the pattern, and so I was fortunate to discover what does NOT work! States have been pouring billions of dollars into programs that wind up funneling those returning citizen's back into a system that feeds upon them. Studies have shown that many of the so-called Halfway Houses in the hood, and facilities that "warehouse" ex-felons, often wind up with higher recidivism rates than those who are released directly into the street!

After considering what does NOT work, I've come up with a concept that should/could/would (I Hope!:-) It's a relatively simple concept based upon Maslow's hierarchy of needs. (Because I'm closing in one the 6,000 character cap. in this letter, I'll explain the concept in another email). The New Genesis Transition Project is meant to be passed along to community leaders in every major urban area where the recidivism rates are highest.

One of the major failures of what is euphemistically referred to as "Rehabilitation" in this country is this: To rehabilitate, by definition, is to restore someone to their original condition! Well, if they were judged to be guilty of criminal behavior when they were arrested, and you restore them to their original condition, what have you really done?

Now, here's the fun part! :-) Another huge problem in this country is the crumbling infrastructure! Our roads, rails, and bridges are crumbling. Entire city bocks explode into flames because the network of gas pipes are decrepit. Pipes that carry drinking water in and waste water out are ancient a and in dire need of replacement One of the only other issues in this country which can garner bipartisan support is the need to overhaul our nation's crumbling infrastructure. To do so will cost several trillion dollars.

What we need to do is dust off Roosevelt's New Deal, projects like the W.P.A and the C.C.C.! We can bring back our manufacturing jobs by churning out the goods needed to rebuilt our nation's infrastructure! We can restore hope by putting people to work! Those "returning Citizens" who complete the 6 month New Genesis Transition Project can join work crews and join in helping to rebuild our Nation. What we need o do is take another look at LBJ's "Great Society" and find the things that worked, while refining the ideas that missed the mark.

Working on the New Genesis Transition Project is "one" of the things that I look forward to doing once I'm released.

After emerging from hell, Dante's Inferno ends with the line, "To see the stars again." We all want to see those stars again.

Yours in Christ,
Gary