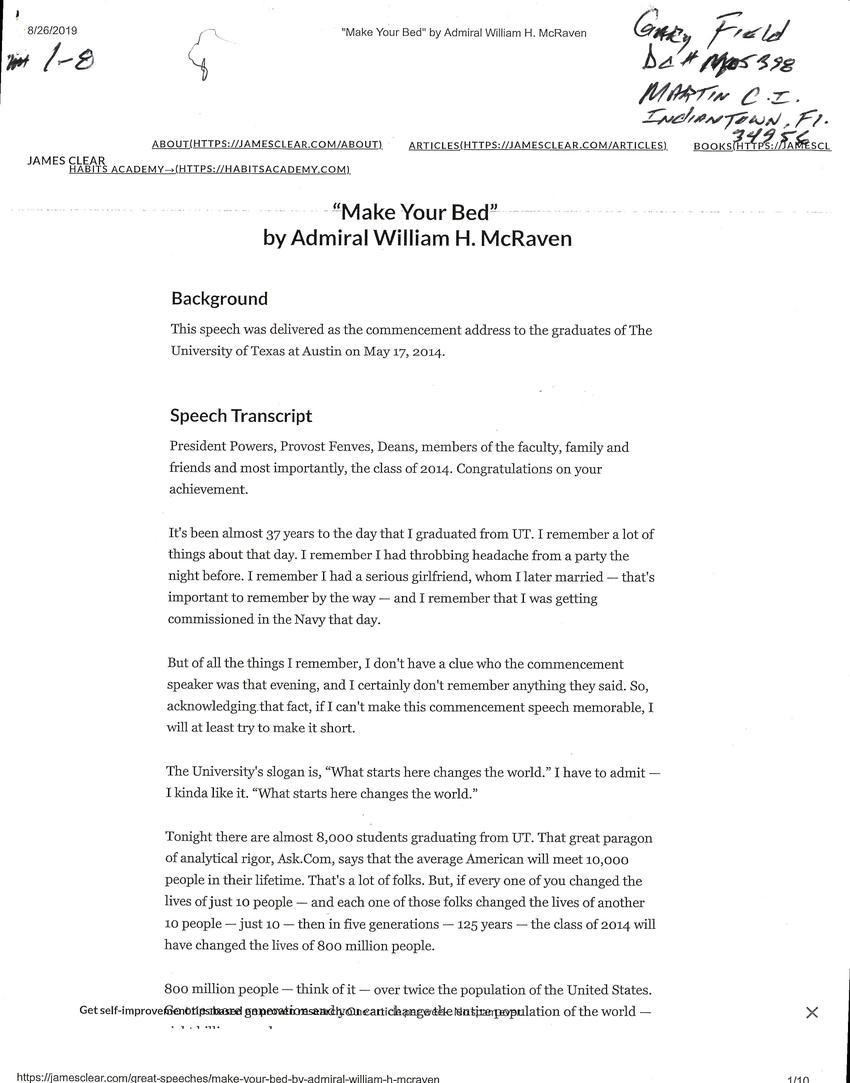 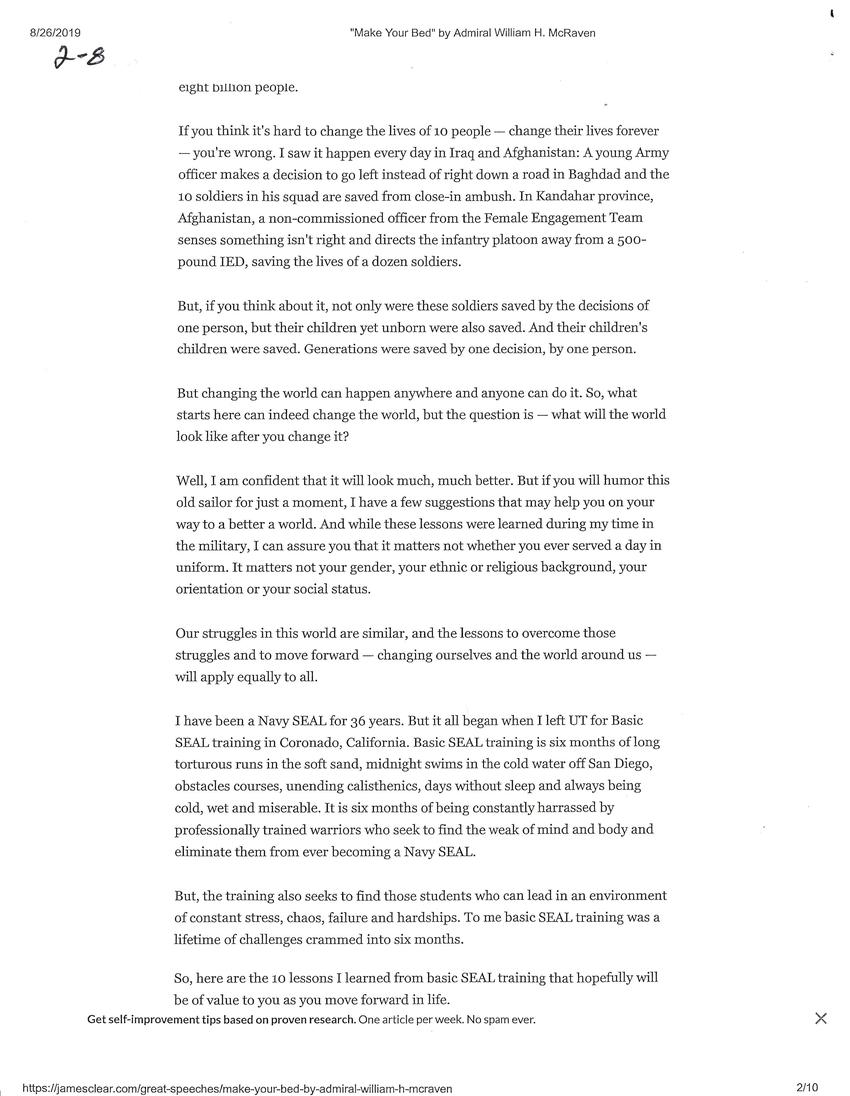 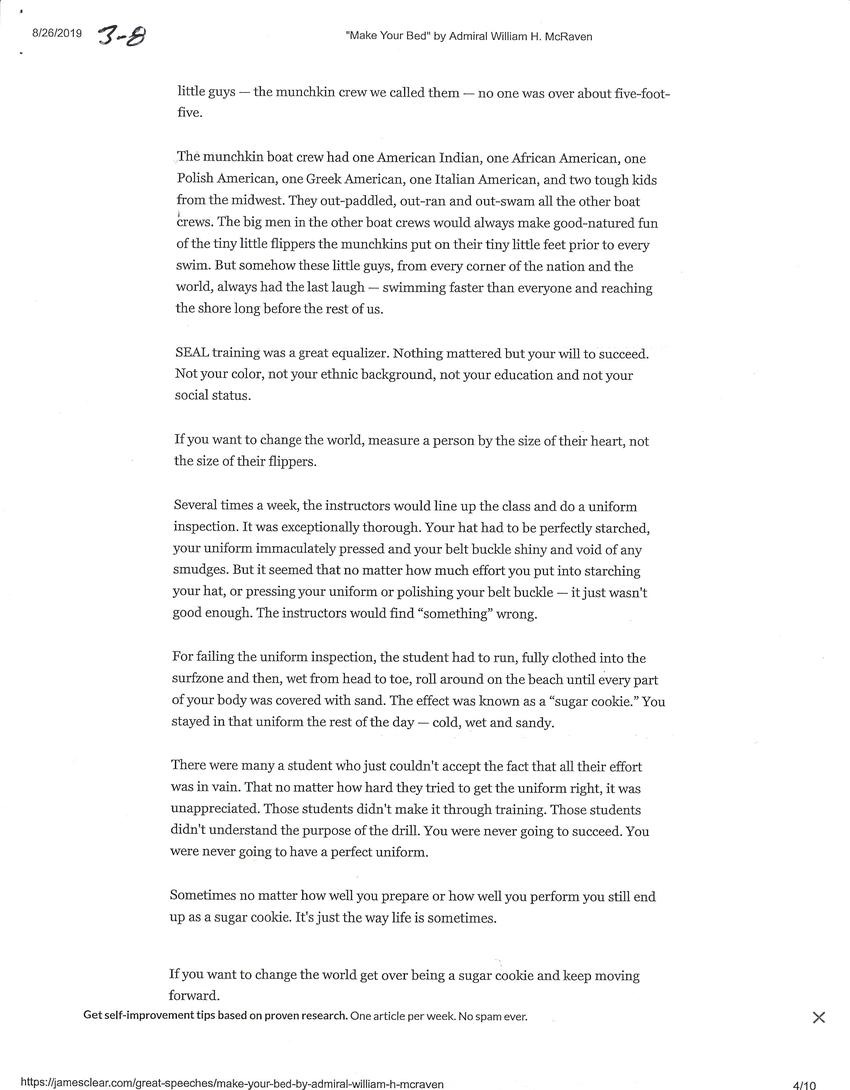 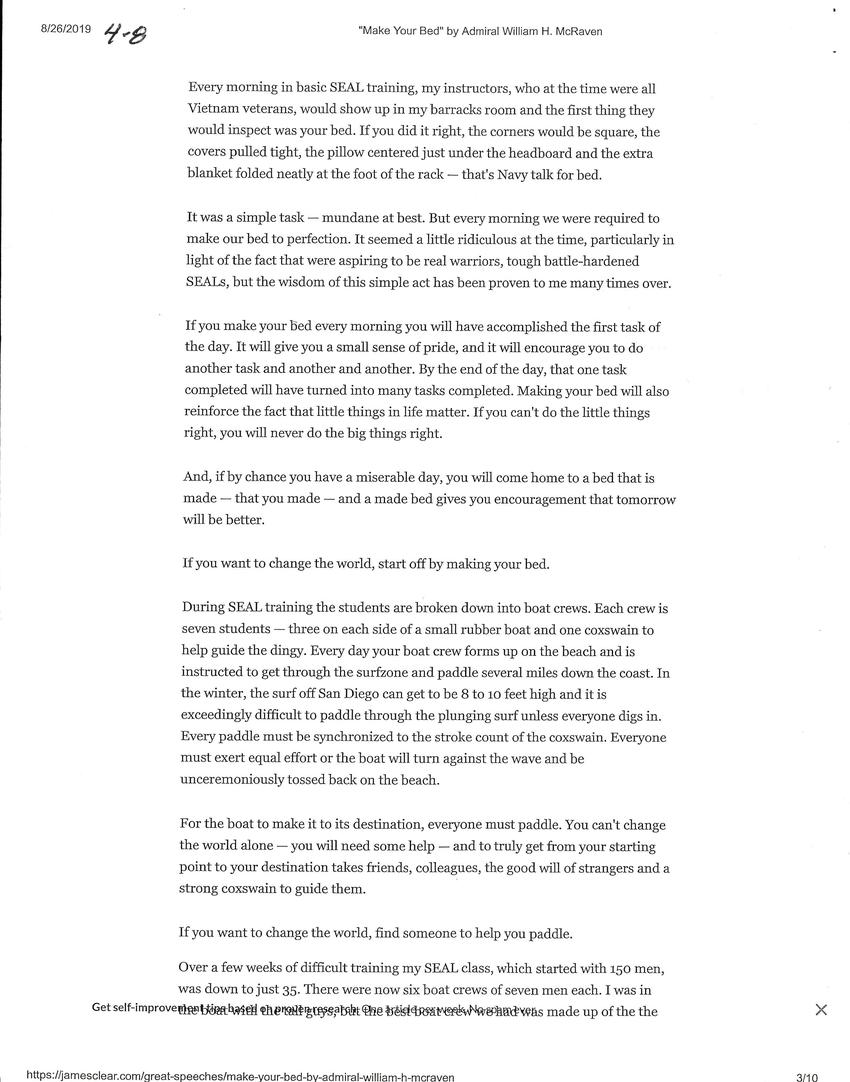 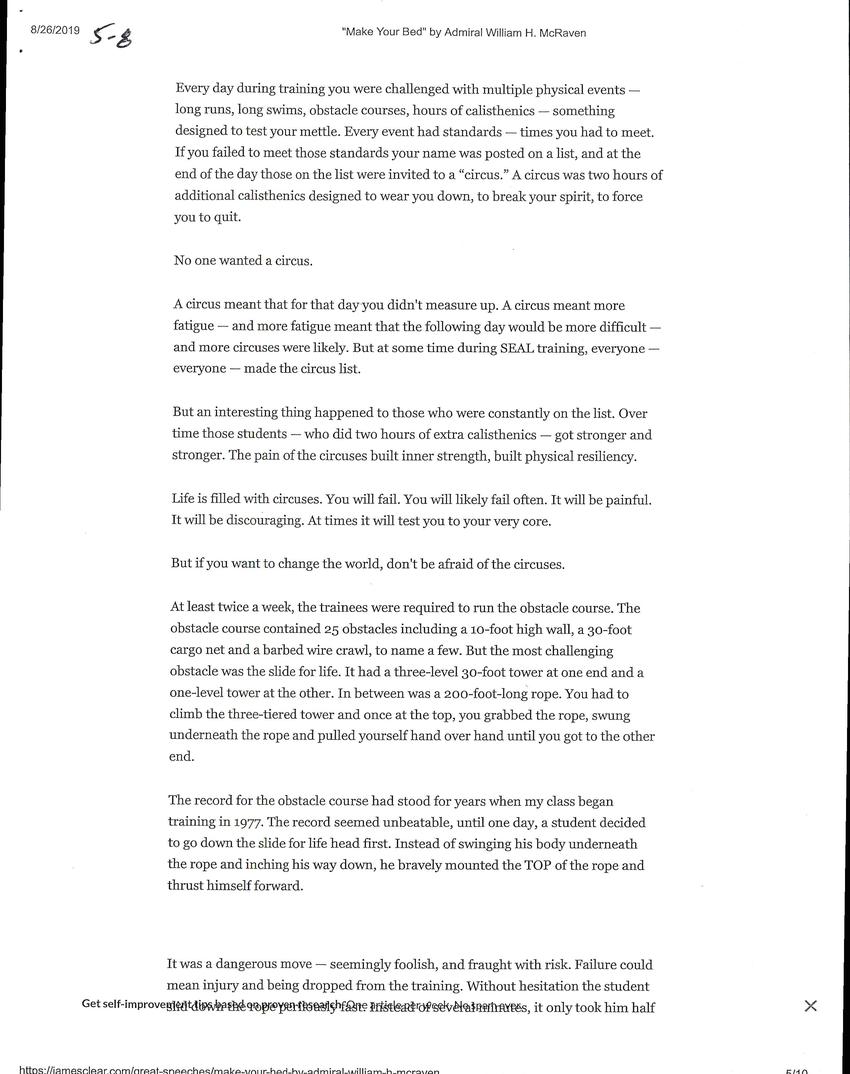 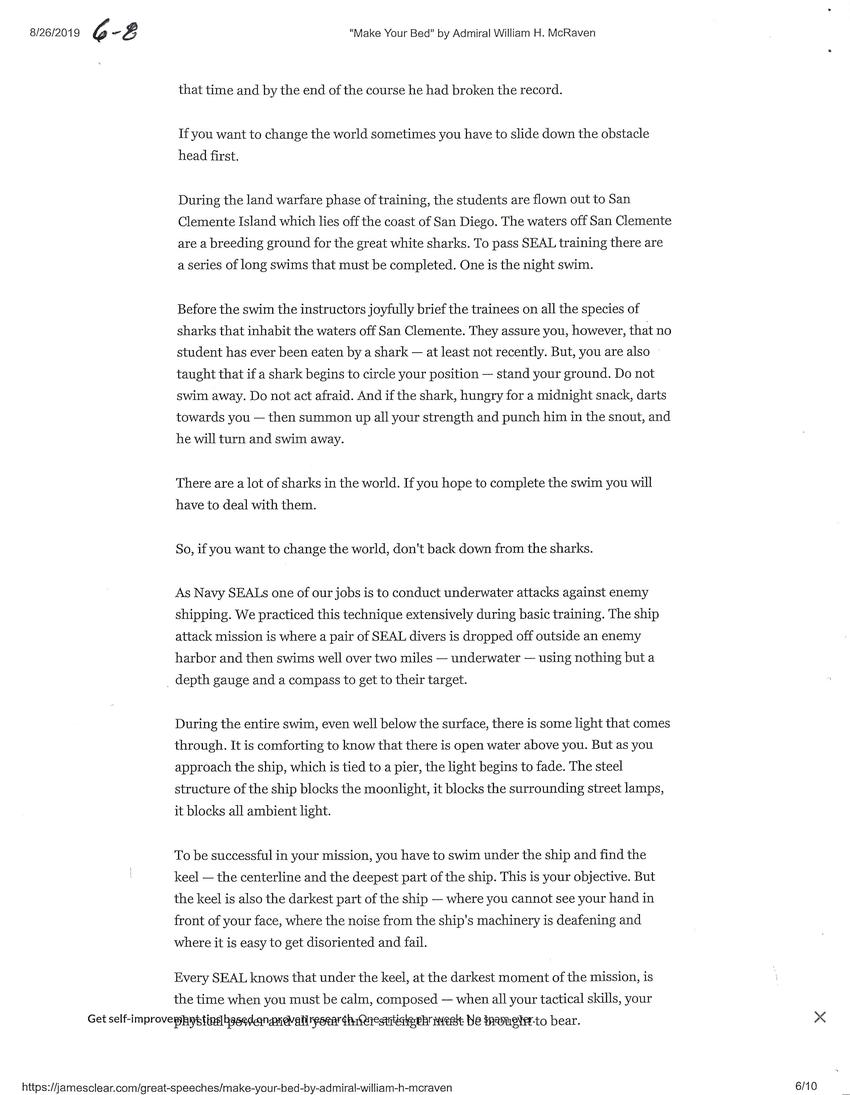 This speech was delivered as the commencement address to the graduates of The University of Texas at Austin on May 17, 2014.

President Powers, Provost Fenves, Deans, members of the faculty, family and friends and most importantly, the class of 2014. Congratulations on your achievement.

It's been almost 37 years to the day that I graduated from UT. I remember a lot of things about that day. I remember I had throbbing headache from a party the night before. I remember I had a serious girlfriend, whom I later married - that's important to remember by the way - and I remember that I was getting commissioned in the Navy that day.

But of all the things I remember, I don't have a clue who the commencement speaker was that evening, and I certainly don't remember anything they said. So, acknowledging that fact, if I can't make this commencement speech memorable, I will at least try to make it short.

If you think it's hard to change the lives of 10 people - change their lives forever - you're wrong. I saw it happen every day in Iraq and Afghanistan: A young Army officer makes a decision to go left instead of right down a road in Baghdad and the 10 soldiers in his squad are saved from close-in ambush. In Kandahar province, Afghanistan, a non-commissioned officer from the Female Engagement Team senses something isn't right and directs the infantry platoon away from a 500-pound IED, saving the lives of a dozen soldiers.

But changing the world can happen anywhere and anyone can do it. So, what starts here can indeed change the world, but the question is - what will the world look like after you change it?

Well, I am confident that it will look much, much better. But if you will humor this old sailor for just a moment, I have a few suggestions that may help you on your way to a better world. And while these lessons were learned during my time in the military, I can assure you that it matters not whether you ever served a day in uniform. It matters not your gender, your ethnic or religious background, your orientation or your social status.

Our struggles in this world are similar, and the lessons to overcome those struggles and to move forward - changing ourselves and the world around us - will apply equally to all.

I have been a Navy SEAL for 36 years. But it all began when I left UT for Basic SEAL training in Coronado, California. Basic SEAL training is six months of long torturous runs in the soft sand, midnight swims in the cold water off San Diego, obstacles courses, unending calisthenics, days without sleep and always being cold, wet and miserable. It is six months of being constantly harrassed by professionally trained warriors who seek to find the weak of mind and body and eliminate them from ever becoming a Navy SEAL.

But, the training also seeks to find those students who can lead in an environment of constant stress, chaos, failure and hardships. To me basic SEAL training was a lifetime of challenges crammed into six months.

So, here are the 10 lessons I learned from basic SEAL training that hopefully will be of value to you as you move forward in life.

little guys - the munchkin crew we called them - no one was over about five-foot-five.

The munchkin boat crew had one American Indian, one African American, one Polish American, one Greek American, one Italian American, and two tough kids from the midwest. They out-paddled, out-ran and out-swam all the other boat crews. The big men in the other boat crews would always make good-natured fun of the tiny little flippers the munchkins put on their tiny little feet prior to every swim. But somehow these little guys, from every corner of the nation and the world, always had the last laugh - swimming faster than everyone and reaching the shore long before the rest of us.

SEAL training was a great equalizer. Nothing mattered but your will to succeed. Not your color, not your ethnic background, not your education and not your social status.

Several times a week, the instructors would line up the class and do a uniform inspection. It was exceptionally thorough. Your hat had to be perfectly starched, your uniform immaculately pressed and your belt buckle shiny and void of any smudges. But it seemed that no matter how much effort you put into starching your hat, or pressing your uniform or polishing your belt buckle - it just wasn't good enough. The instructors would find "something" wrong.

For failing the uniform inspection, the student had to run, fully clothed into the surfzone and then, wet from head to toe, roll around on the beach until every part of your body was covered with sand. The effect was known as a "sugar cookie." You stayed in that uniform the rest of the day - cold, wet and sandy.

If you want to change the world get over being a sugar cookie and keep moving forward.

Every morning in basic SEAL training, my instructors, who at the time were all Vietnam veterans, would show up in my barracks room and the first thing they would inspect was your bed. If you did it right, the corners would be square, the covers pulled tight, the pillow centered just under the headboard and the extra blanket folded neatly at the foot of the rack - that's Navy talk for bed.

It was a simple task - mundane at best. But every morning we were required to make our bed to perfection. It seemed a little ridiculous at the time, particularly in light of the fact that were aspiring to be real warriors, tough battle-hardened SEALs, but the wisdom of this simple act has been proven to me many times over.

If you make your bed every morning you will have accomplished the first task of the day. It will give you a small sense of pride, and it will encourage you to do another task and another and another. By the end of the day, that one task completed will have turned into many tasks completed. Making your bed will also reinforce the fact that little things in life matter. If you can't do the little things right, you will never do the big things right.

And, if by change you have a miserable day, you will come home to a bed that is made - that you made - and a made bed gives you encouragement that tomorrow will be better.

If you want to change the world, start off by making your bed.