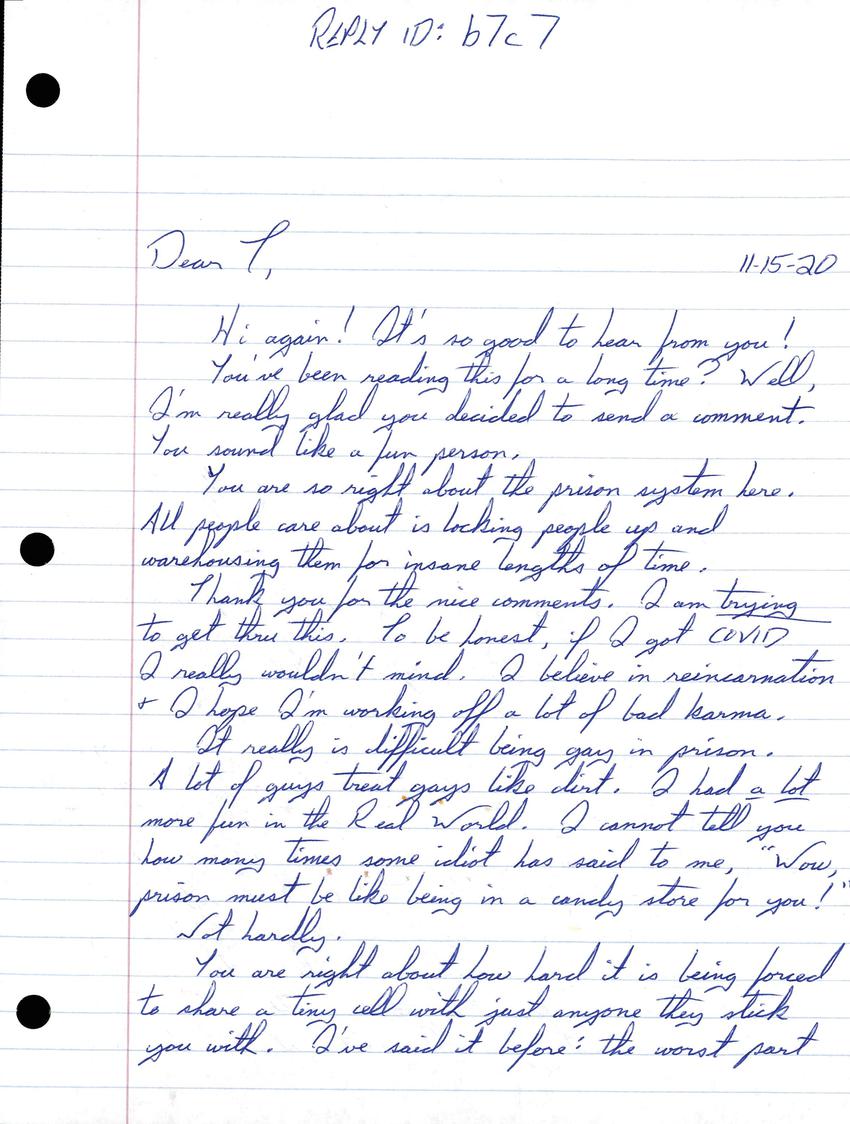 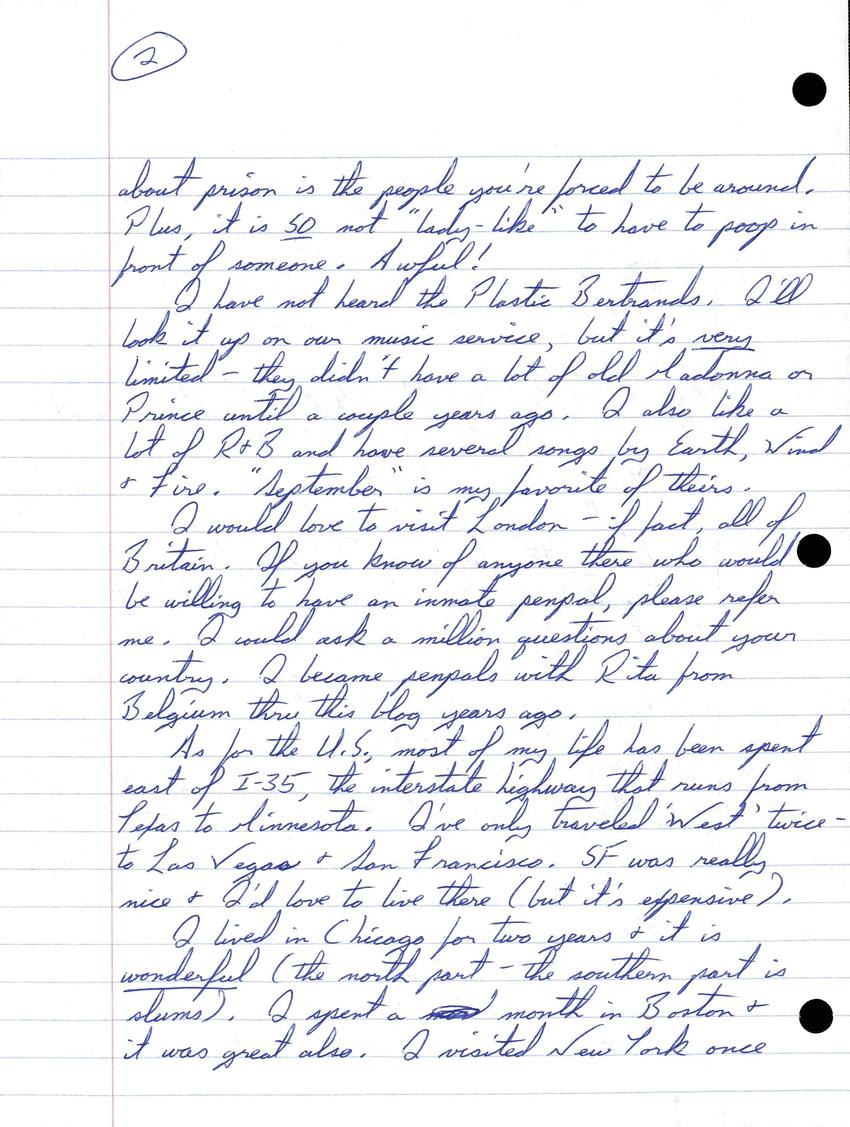 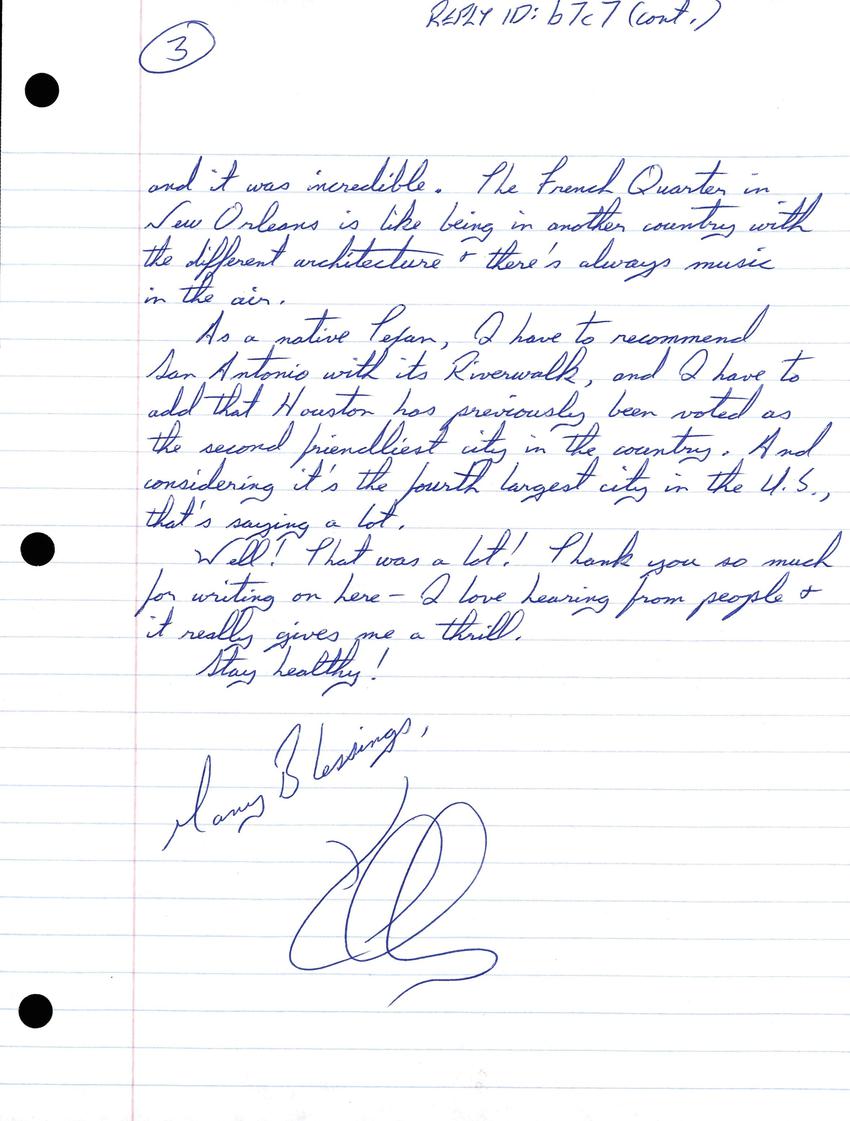 Hi again! It's so good to hear from you!
You've been reading this for a long time? Well, I'm really glad you decided to send a comment. You sound like a fun person.
You are so right about the prison system here. All people care about is locking people up and warehousing them for insane lengths of time.
Thank you for the nice comments. I am trying to get thru this. To be honest, if I got COVID I really wouldn't mind. I believe in reincarnation and I hope I'm working off a lot of bad karma.
It really is difficult being gay in prison. A lot of guys treat gays like dirt. I had a lot more fun in the Real World. I cannot tell you how many times some idiot has said to me, "Wow, prison must be like being in a candy store for you!"
Not hardly.
You are right about how hard it is being forced to share a tiny cell with just anyone they stick with you. I've said it before: the worst part about prison is the people you're forced to be around. Plus, it is SO not "lady-like" to have to poop in front of someone. Awful!
I have not heard the Plastic Bertrands. I'll look it up on our music service, but it's very limited - they didn't have a lot of old Madonna or Prince until a couple years ago. I also like a lot of R&B and have several songs by Earth, Wind and Fire. "September" is my favorite of theirs.
I would love to visit London - in fact, all of Britain. If you know if anyone there who would be willing to have an inmate penpal, please refer me. I would ask a million questions about your country. I became penpals with Rita from Belgium through this blog years ago.
As for the U.S., most of my life has been spent east of I-35, the interstate highway that runs from Texas to Minnesota. I've only traveled 'West' twice - to Las Vegas and San Francisco. SF was really nice and I'd love to live there (but it's expensive).
I lived in Chicago for two years and it is wonderful (the north part - the southern part is slums). I spent a month in Boston and it was great also. I visited New York once and it was incredible. The French Quarter in New Orleans is like being in another country with the different architecture and there's always music in the air.
As a native Texan, I have to recommend San Antonio with its Riverwalk, and I have to add that Houston has previously been voted as the second friendliest city in the country. And considering it's the fourth largest city in the U.S., that's saying a lot.
Well! That was a lot! Thank you so much for writing on here - I love hearing from people and it really gives me a thrill.
Stay healthy!