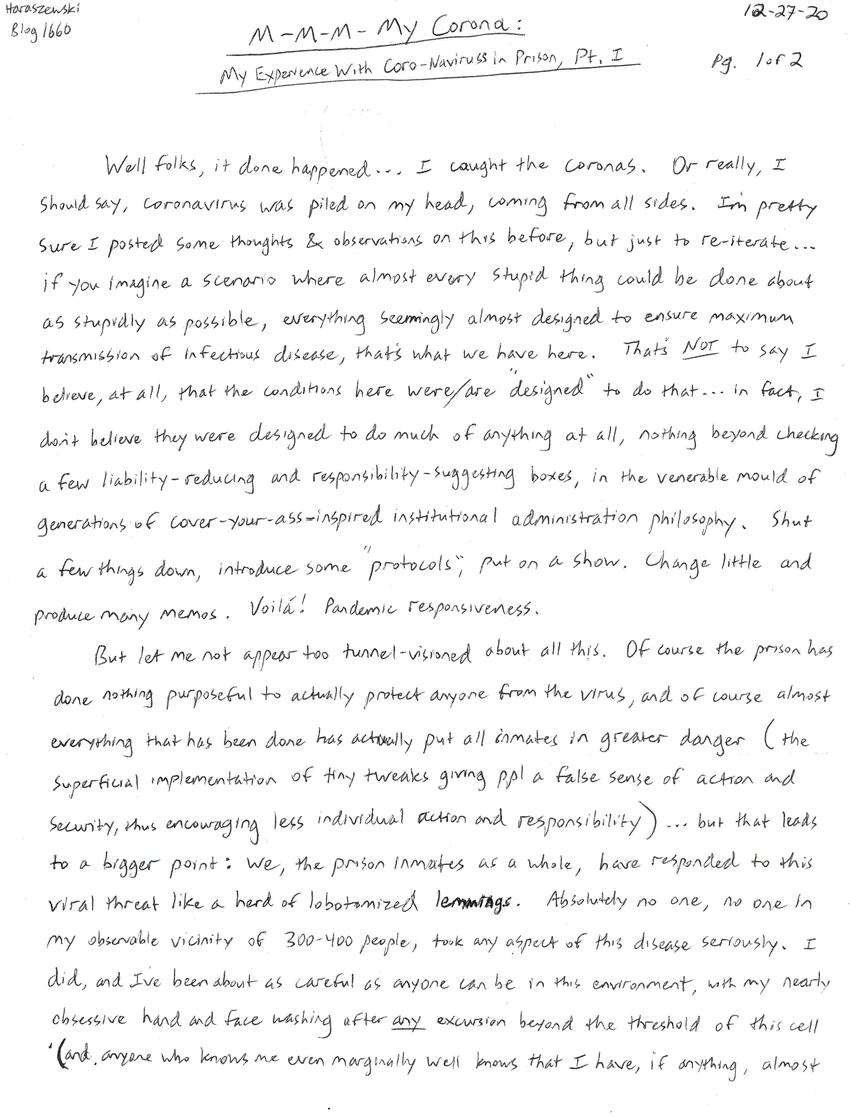 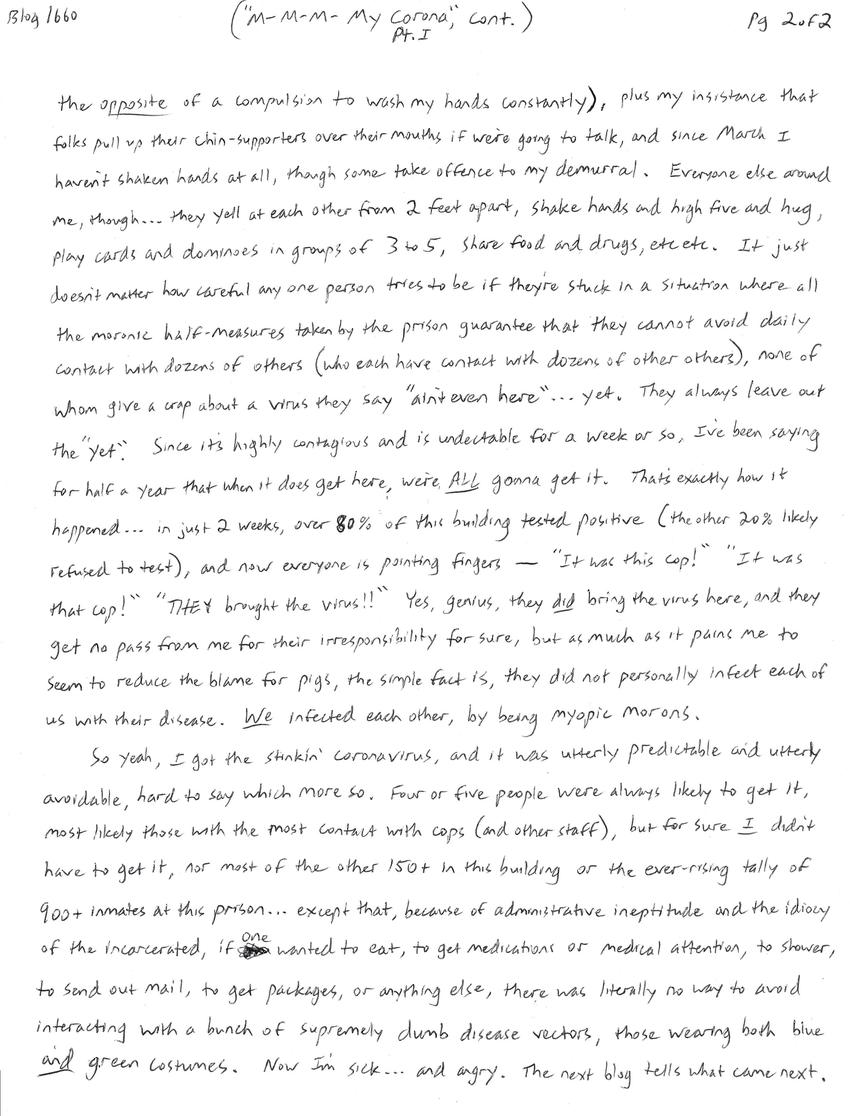 M-M-M-My Corona: My Experience with Coronavirus in Prison, Pt. 1

Well folks, it done happened... I caught the Coronas. Or really, I should say, Coronavirus was piled on my head, coming from all sides. I'm pretty sure I posted some thoughts and observations on this before, but just to re-iterate... if you imagine a scenario where almost every stupid thing could be done about as stupidly as possible, everything seemingly almost designed to ensure maximum transmission of infectious disease, that's what we have here. That's Not to say I believe, at all, that the conditions here were/are "designed" to do that... in fact, I don't believe they were designed to do much of anything at all, nothing beyond checking a few liability-reducing and responsibility-suggesting boxes, in the venerable mould of generations of cover-your-ass-inspired institutional administration philosophy. Shut a few things down, introduce some "protocols", put on a show. Change little and produce many memos. Voilá! Pandemic responsiveness.

But let me not appear too tunnel-visioned about all this. Of course the prison has done nothing purposeful to actually protect anyone from the virus, and of course almost everything that has been done has actually put all inmates in greater danger (the superficial implementation of tiny tweaks giving people a false sense of action and security, thus encouraging less individual action and responsibility)... but that leads to a bigger point: we, the prison inmates as a whole, have responded to this viral threat like a herd of lobotomized lemmings. Absolutely no one, no one in my observable vicinity of 300-400 people, took any aspect of this disease seriously. I did, and I've been about as careful as anyone can be in this environment, with my nearly obsessive hand and face washing after any excursion beyond the threshold of this cell (and anyone who knows me even marginally well knows that I have, if anything, almost the opposite of a compulsion to wash my hands constantly), plus my insistence that folks pull up their chin-supporters over their mouths if we're going to talk, and since March I haven't shaken hands at all, though some take offense to my demurral. Everyone else around me, though... they yell at each other from 2 feet apart, shake hands and high five and hug, play cards and dominoes in groups of 3 to 5, share food and drugs etc etc. It just doesn't matter how careful any one person tries to be if they're stuck in a situation where all the moronic half-measures taken by the prison guarantee that they cannot avoid daily contact with dozens of others (who each have contact with dozens of other others), none of whom give a crap about a virus they say "ain't even here"... yet. They always leave out the "yet." Since it's highly contagious and is undetectable for a week or so, I've been saying for half a year that when it does get here, we're ALL gonna get it. That's exactly how it happened... in just 2 weeks, over 80% of this building tested positive (the other 20% likely refused to test), and now everyone is pointing fingers – "It was this cop!" "It was that cop!" "THEY brought the virus!!" Yes, genius, they did bring the virus here, and they get no pass from me for their irresponsibility for sure, but as much as it pains me to seem to reduce the blame for pigs, the simple fact is, they did not personally infect each of us with their disease. We infected each other, by being myopic morons.
So yeah, I got the stinkin' coronavirus, and it was utterly predictable and utterly avoidable, hard to say which more so. Four or five people were always likely to get it, most likely those with the most contact with cops (and other stafF), but for sure I didn't have to get it, nor most of the other 150+ in this building or the ever rising tally of 900+ inmates at this prison... except that, because of administrative ineptitude and the idiocy of the incarcerated, if one wanted to eat, to get medications or medical attention, to shower, to send out mail, to get packages, or anything else, there was literally no way to avoid interacting with a bunch of supremely dumb disease vectors, those wearing both blue and green costumes. Now I'm sick... and angry. The next blog tells what came next.
...