Life or Death, You decide 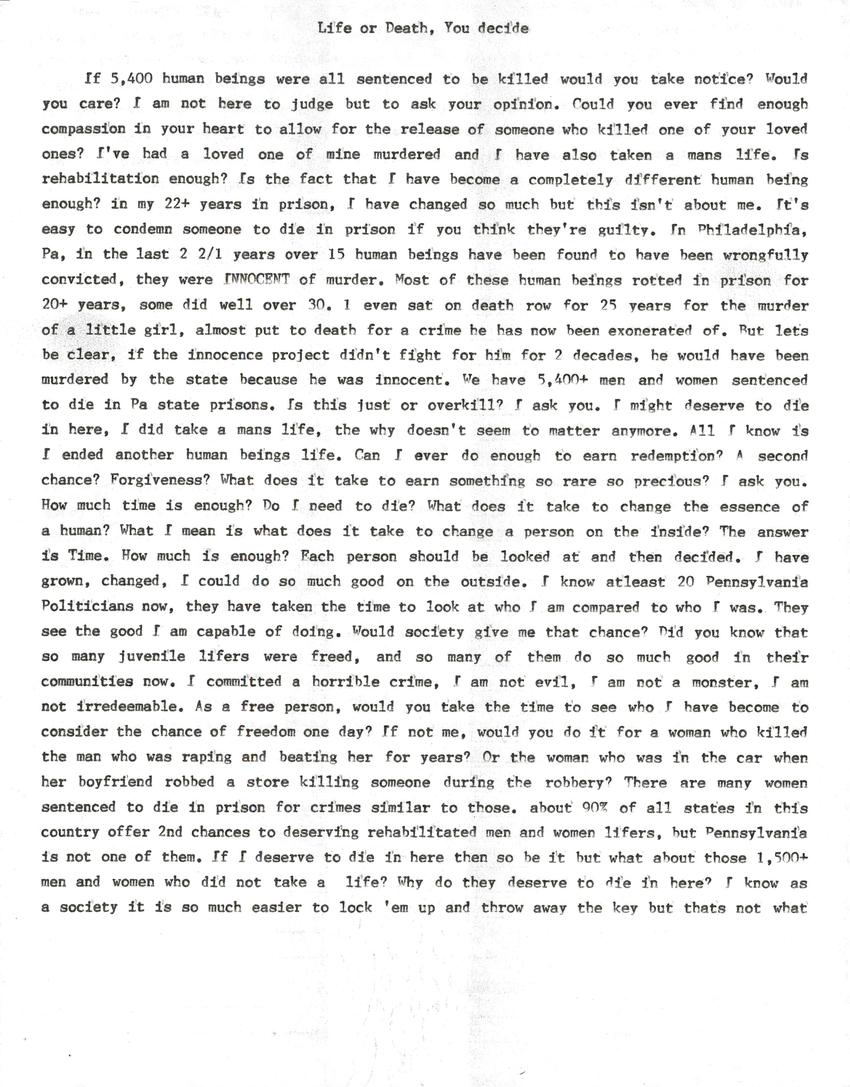 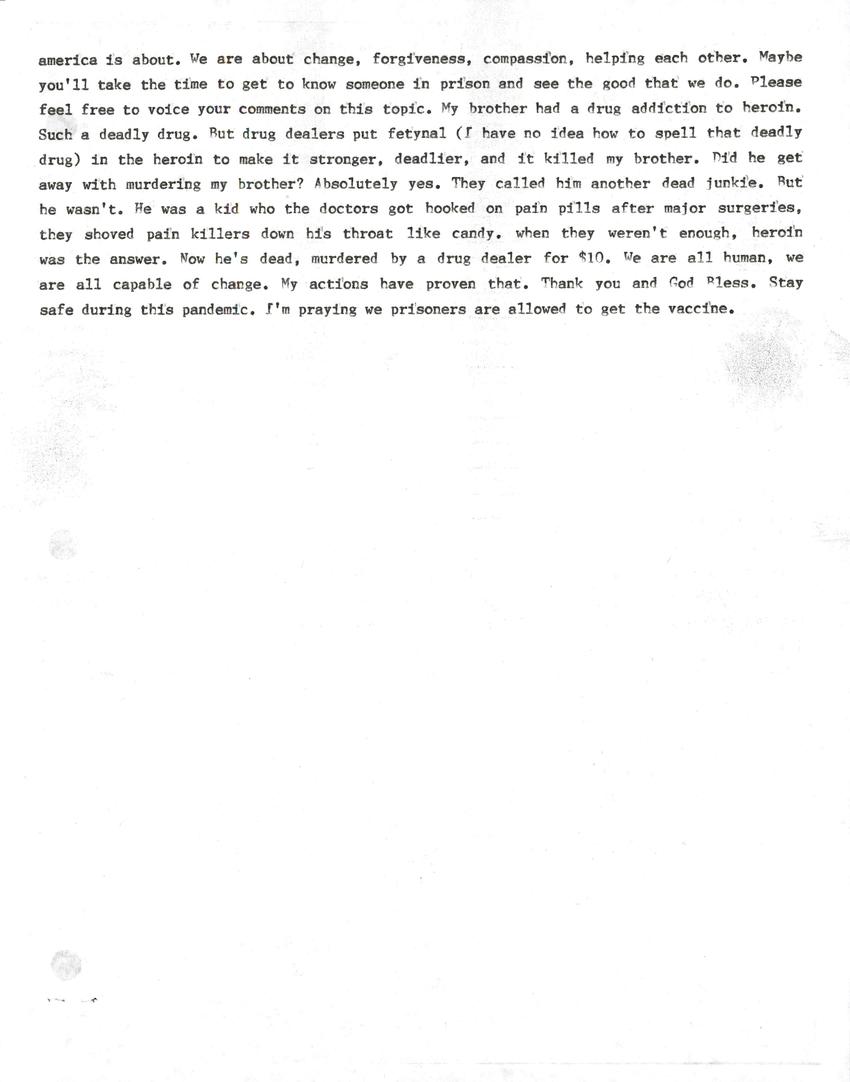 Life or Death, You decide
If 5,400 human beings were all sentenced to be killed would you take notice? Would you care? I am not here to judge but ask your opinion. Could you ever find enough compassion in your heart to allow for the release of someone who killed one of your loved ones? I've had a loved one of mine murdered and I have also taken a mans life. Is rehabilitation enough? Is the fact that I have become a completely different human being enough? In my 22+ years in prison, I have changed so much but this isn't about me. It's easy to condemn someone to die in prison if you think they're guilty. In Philadelphia, Pa, in the last 2 1/2 years over 15 human being have been found to have been wrongfully convicted, they were INNOCENT of murder. Most of these human beings rotted in prison for 20+ years, some did well over 30. 1 even sat on death row for 25 years for the murder of a little girl, almost put to death for a crime he has now been exonerated of. But lets be clear, if the innocence project didn't fight for him for 2 decades, he would have been murdered by the state because he was innocent. We have 5,400+ men and women sentenced to die in Pa state prisons. Is this just or overkill? I ask you. I might deserve to die in here, I did take a mans life, the why doesn't seem to matter anymore. All I know is I ended another human beings life. Can I ever do enough to earn redemption? A second chance? Forgiveness? What does it take to earn something so rare so precious? I ask you. How much time is enough? Do I need to die? What does it take to change the essence of a human? What I mean is what does it take to change a person on the inside? The answer is Time. How much is enough? Each person should be looked at and then decided. I have grown, changed, I could do so much good on the outside. I know at least 20 Pennsylvania Politicians now, they have taken the time to look at who I am compared to who I was. They see the good I am capable of doing. Would society give me that chance? Did you know that so many juvenile lifers were freed, and so many of them do so much good in their communities now. I committed a horrible crime, I am not evil, I am not a monster, I am not irredeemable. As a free person, would you take the time to see who I have become to consider the chance of freedom one day? If not me, would you do it for a woman who killed the man who was raping and beating her for years? Or the woman who was in the car when her boyfriend robbed a store killing someone during the robber? There are many women sentenced to die in prison for crimes similar to those. About 90% of all states in this country offer 2nd chances to deserving rehabilitated men and women lifers, but Pennsylvania is not one of them. If I deserve to die in here then so be it but what about those 1,500+ men and women who did not take a life? Why do they deserve to die in here? I know as a society it is so much easier to lock 'em up and throw away the key but that's not what America is about. We are about change, forgiveness, compassion, helping each other. Maybe you'll take the time to get to know someone in prison and see the good that we do. Please feel free to voice your comments on this topic. My brother had a drug addiction to heroin. Such a deadly drug. But drug dealers but fetynal (I have no idea how to spell that deadly drug) in the heroin to make it stronger, deadlier, and it killed by brother. Did he get away with murdering my brother? Absolutely yes. They called him another dead junkie. But he wasn't. He was a kid who the doctors got hooked on pain pills after major surgeries, they showed pain killers down his throat like candy. When they weren't enough, heroin was the answer. Now he's dead, murdered by a drug dealer for $10. We are all human, we are all capable of change. My actions have proven that. Thank you and God Bless. Stay safe during this pandemic. I'm praying we prisoners are allowed to get the vaccine.

Our justice system is hideously flawed. I understand wanting to hold those who break the law accountable, but this needs to be in a proportional manner and this is where the breakdown happens. The prison system has become a revolving door for inmates because we as a society have made it almost impossible for ex-prisoners to rejoin the community in a normal way and with dignity.

The fact that there is a chance that one of those 5,400 people could be innocent should alter the trajectory and no one should be sentenced to death.

Thank you for giving this issue a voice and keep your head up. I know it's a lot easier for me to say that as I'm not in your situation, but I really hope you can. Humans are capable of growth, change, love, and forgiveness...and this human is rooting for you.

Stay as safe as you can as well during this pandemic.
I'm so sorry about your brother. Thank you so much for writing this. I have always been a firm supporter of rehabilitation over punishment, and it was very enlightening to read about the idea from someone with more personal experience.
Writing out how you feel can be such a useful and calming tool. I know it must have been hard to discuss the loss of your brother. I have had several family members go to rehab so I somewhat understand the grief from seeing a family member suffering.
Hi Robert,

I am not sure if you will remember me but you made elementary school hell for me cause you tore me down everyday. Made fun of me constantly and I hated you for it. It took me so long to not let what you did and said to me define my life. I pray your daughter never went through what you put me through. I pray you become a better person and learn from your choices in life. 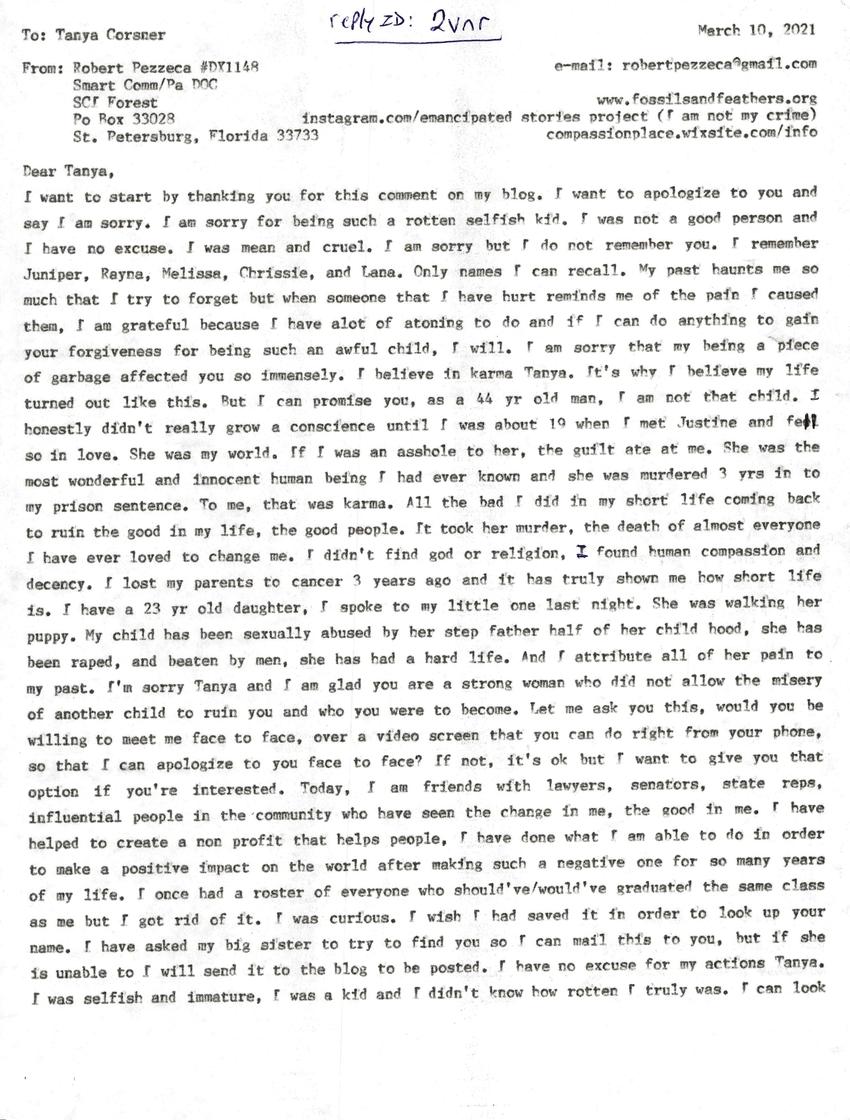 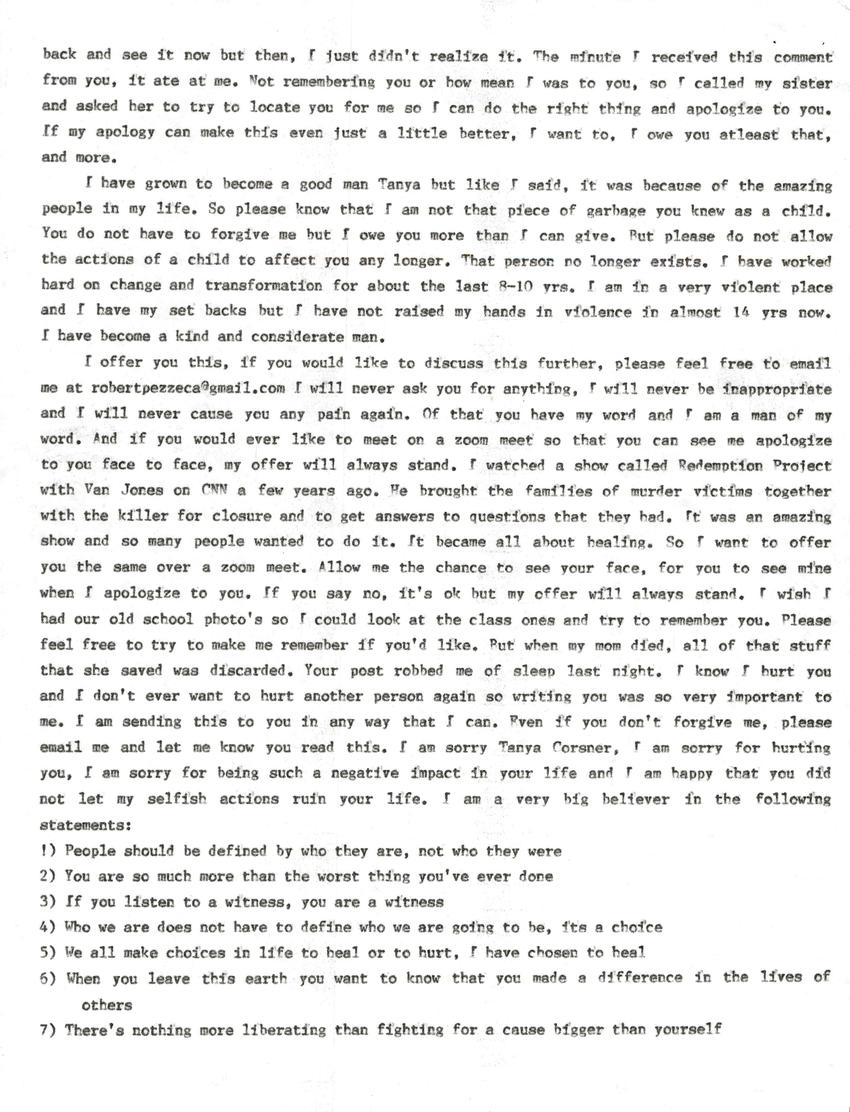 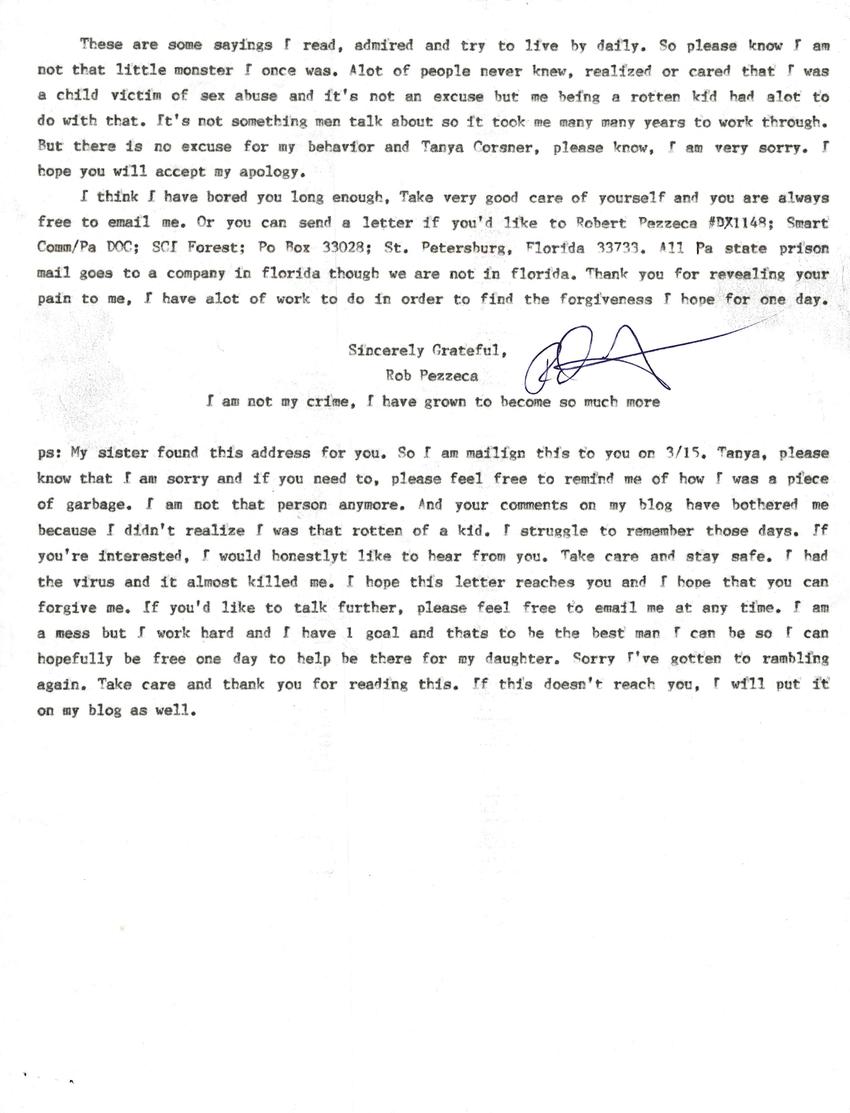