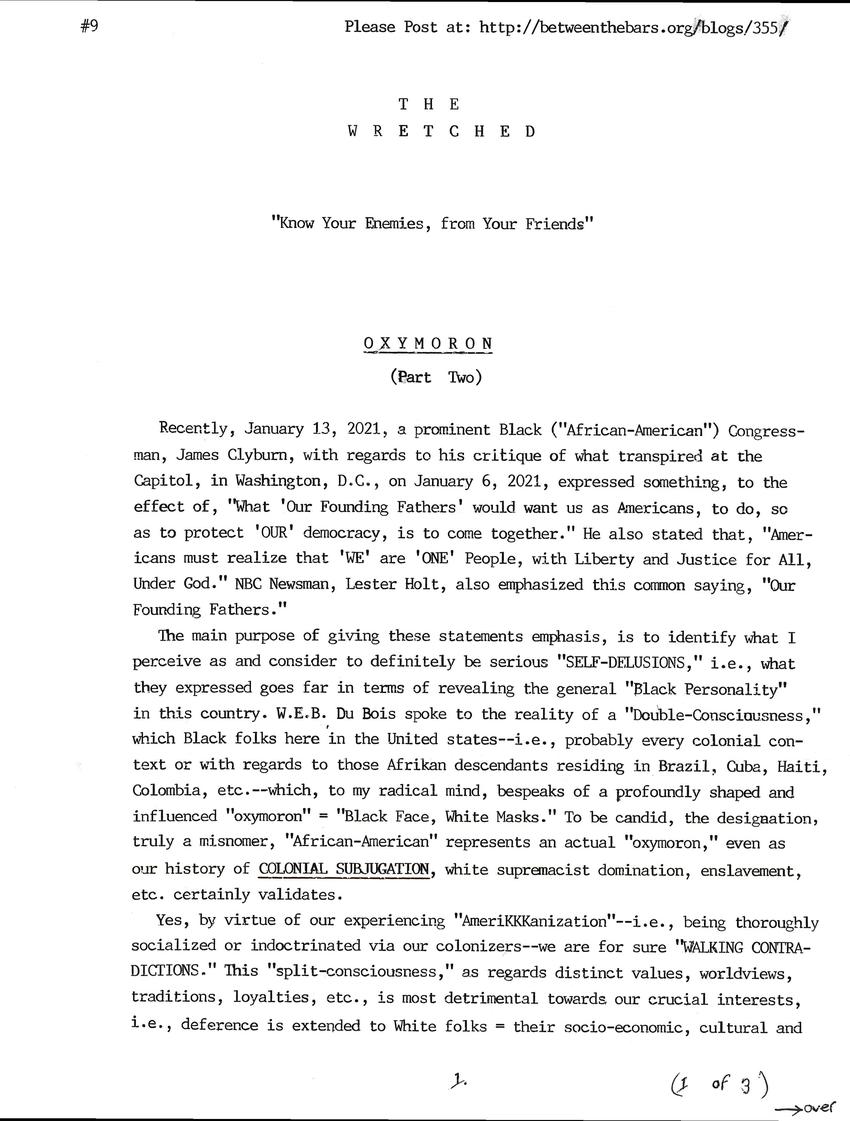 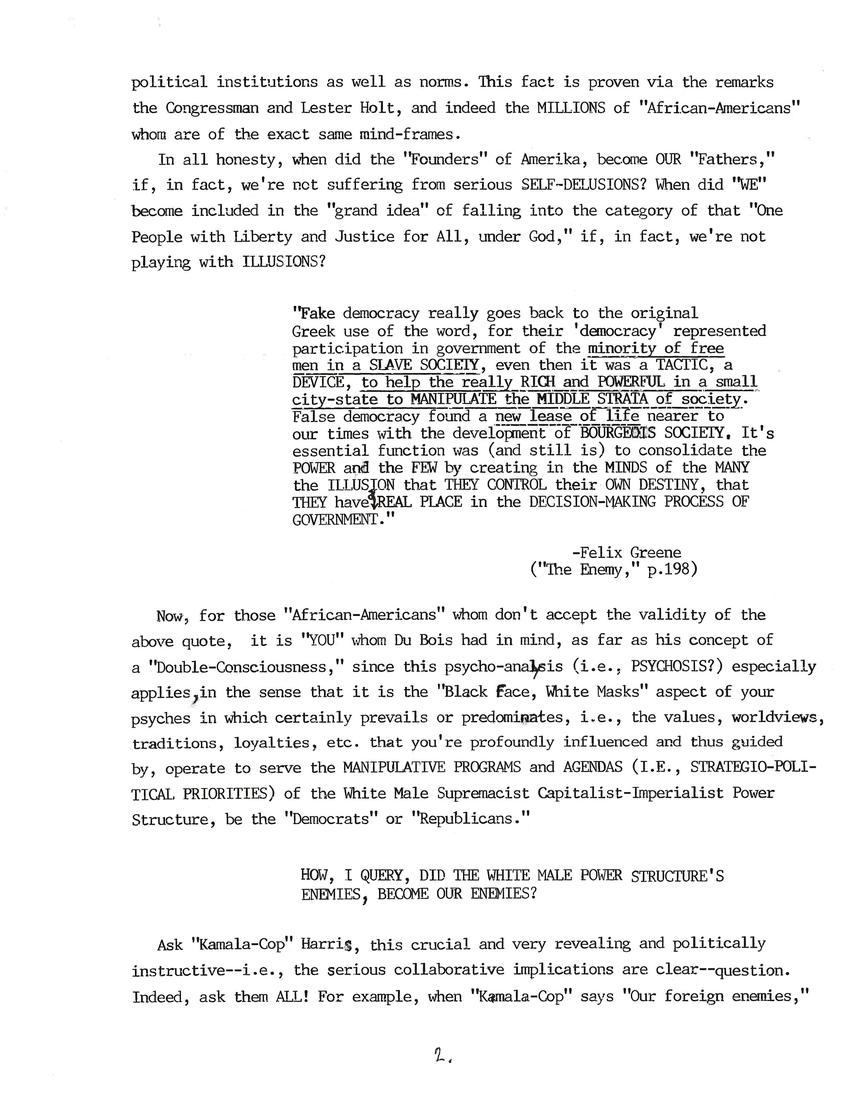 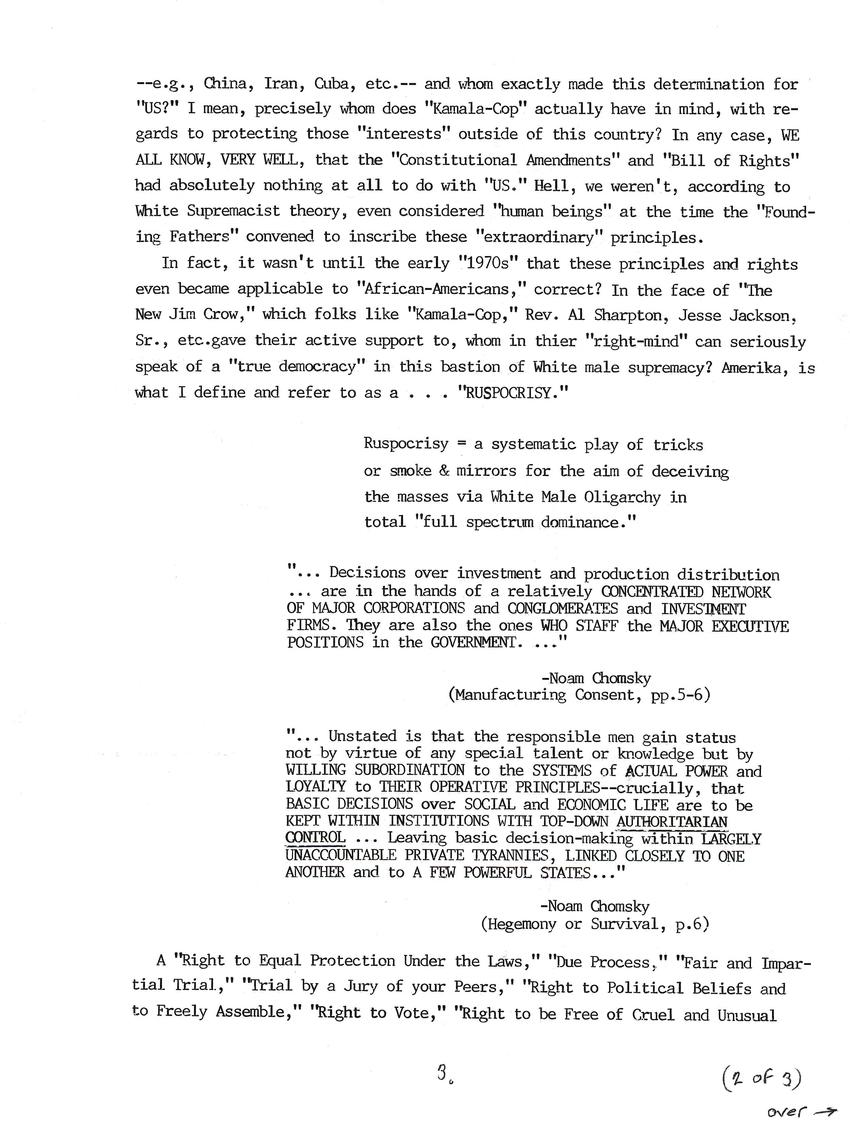 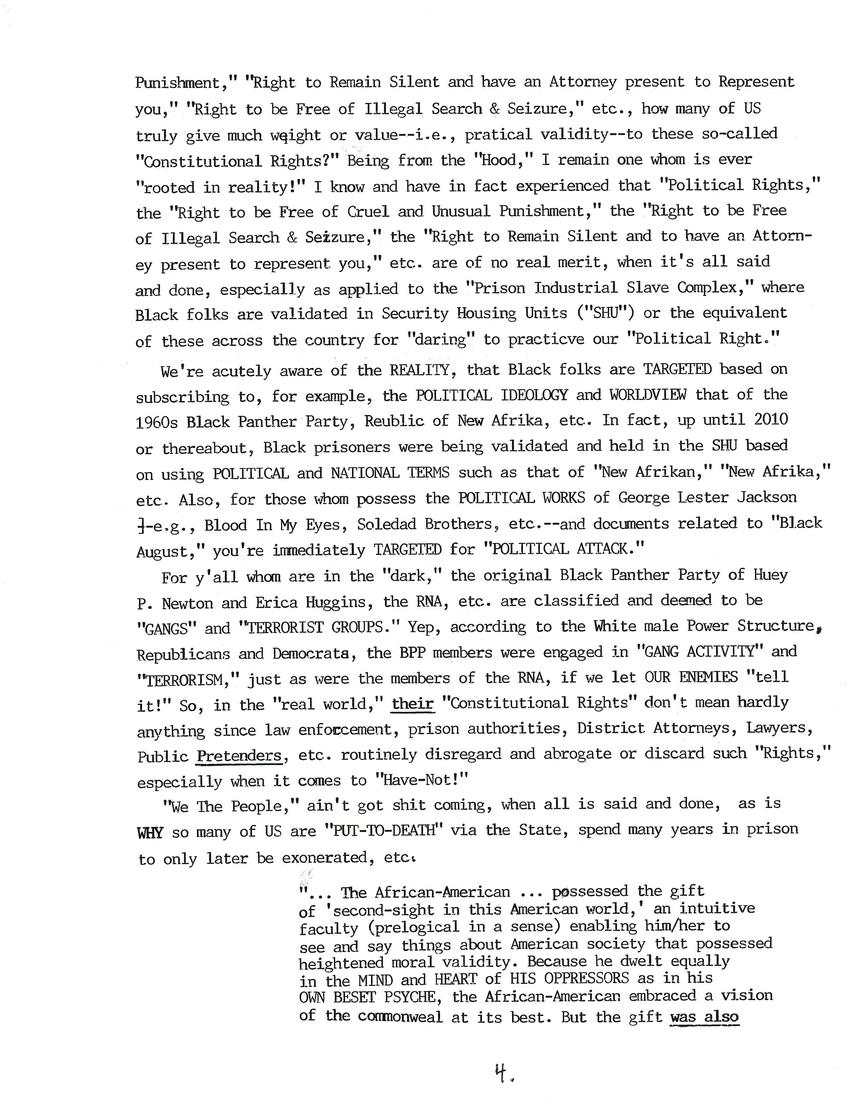 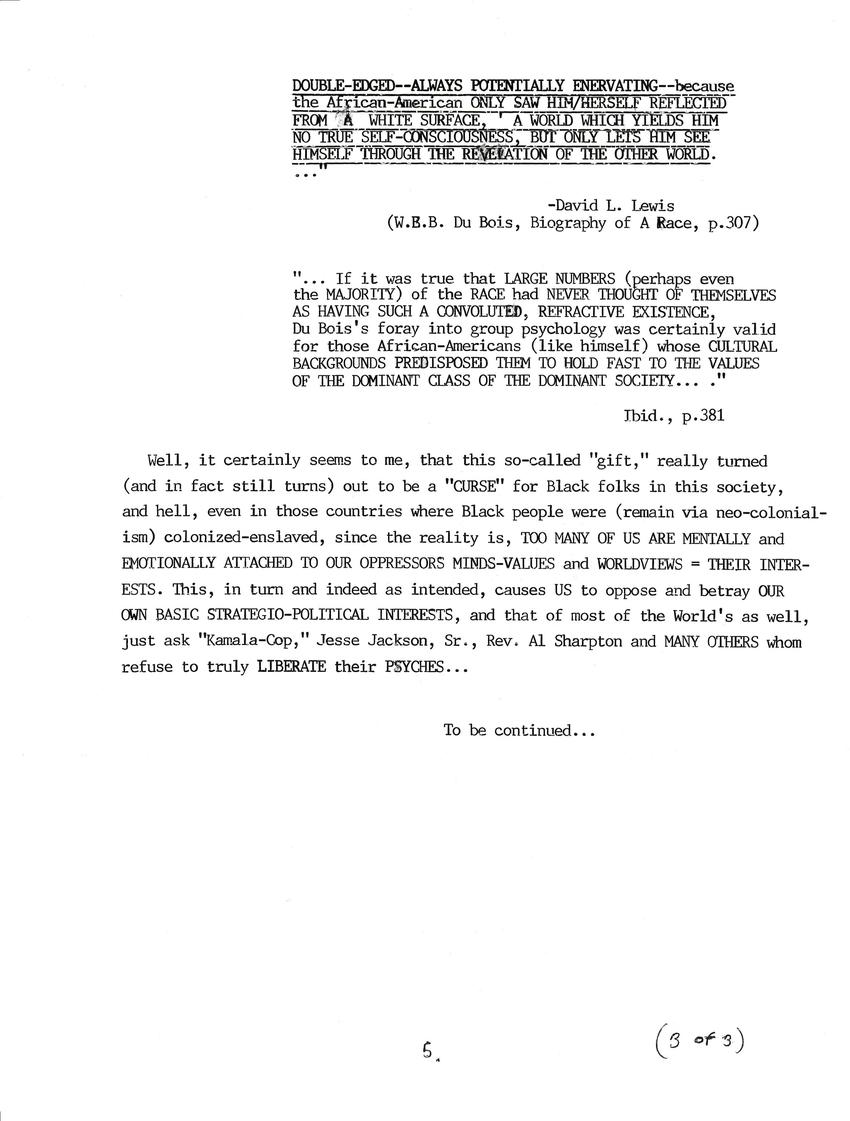 Recently, January 13, 2021, a prominent Black ("African-American") Congressman, James Clyburn, With regards to his critique of what transpired at the Capitol, in Washington, D.C., on January 6, 2021, expressed something to the effect of, "What 'Our Founding Fathers' would want us as Americans, to do, so as to protect 'OUR' democracy, is to come together." He also stated that, "Americans must realize that 'WE' are 'ONE' People, with Liberty and Justice for ALL, Under God." NBC Newsman, Lester Holt, also emphasized this common saying, "Our Founding Fathers."
The main purpose of giving these statements emphasis, is to identify what I perceive as and consider to definitely be serious "SELF-DELUSIONS," i.e., what they expressed goes far in terms of revealing the general "Black Personality" in this country. W.E.B. Du Bois spoke to the reality of a "Double-Consciousness," which Black folks here in the United states--i.e., probably every colonial context or with regards to those Afrikan descendants residing in Brazil, Cuba, Haiti, Colombia, etc.-- which, to my radical mind, bespeaks of a profoundly shaped and influenced "oxymoron" = "Black Face, White Masks." To be candid, the designation, truly misnomer, "African-American" represents an actual "oxymoron," even as our history of COLONIAL SUBJUGATION, white supremacist domination, enslavement, etc. certainly validates.
Yes, by virtue of our experiencing "AmeriKKKanization"--i.e., being thoroughly socialized or indoctrinated via our colonizers--we are for sure "WALKING CONTRADICTIONS." This "split-conciousness," as regards distinct values, worldviews, traditions, loyalties, etc., is most detrimental towards our crucial interests, i.e., deference is extended to White folks = their socio-economic, cultural and political institutions as well as norms. This fact is proven via the remarks of the Congressman and Lester Holt, and indeed the MILLIONS of "African-Americans" whom are of the exact same mind-frames.
In all honesty, when did the "Founders" of Amerika, become OUR "Fathers," if, in fact, we're not suffering from serious SELF-DELUSIONS? When did "WE" become included in the "grand idea" of falling into the category of that "One People with Liberty and Justice for All, under God," if, in fact, we're not playing with ILLUSIONS?

"Fake democracy really goes back to the original Greek use of the word, for their 'democracy' represented participation in government of the minority of free men in a SLAVE SOCIETY, even then it was a TACTIC, a DEVICE, to help the really RICH and POWERFUL in a small city-state to MANIPULATE the MIDDLE STRATA of society. False democracy found a new lease of life nearer to our times with the development of BOURGEOIS SOCIETY. It's essential function was (and still is) to consolidate the POWER and the FEW by creating in the MINDS of the MANY the ILLUSION that THEY CONTROL their OWN DESTINY, that THEY have REAL PLACE in the DECISION-MAKING PROCESS OF GOVERNMENT."
-Felix Greene
("The Enemy," p.198)

Now, for those "African-Americans" whom don't accept the validity of the above quote, it is "YOU" whom Du Bois had in mind, as far s his concept of a "Double-Conciousness," since this psycho-analysis (i.e., PSYCHOSIS?) especially applies, in the sense that it is the "Black Face, White Masks" aspect of your psyches in which certainly prevails or predominates, i.e., the values, worldviews, traditions, loyalties, etc. that you're profoundly influenced and thus guided by, operate to serve the MANIPULATIVE PROGRAMS and AGENDAS (I.E., STRATEGIO-POLITICAL PRIORITIES) of the White Male Supremacist Capitalist-Imperialist Power Structure, be the "Democrats" or "Republicans."

HOW, I QUERY, DID THE WHITE MALE POWER STRUCTURE'S ENEMIES, BECOME OUR ENEMIES?

Ask "Kamala-Cop" Harris, this crucial and revealing and politically instructive--i.e., the serious collaborative implications are clear--question. Indeed, ask them ALL! For example, when "Kamala-Cop" says "Our foreign enemies,"--e.g., China, Iran, Cuba, etc.-- and whom exactly made this determination for "US?" I mean, precisely whom does "Kamala-Cop" actually have in mind, with regards to protecting those "interests" outside of this country? In any case, WE ALL KNOW, VERY WELL, that the "Constitutional Amendments" and "Bill of Rights" had absolutely nothing at all to do with "US." Hell, we weren't, according to White Supremacist theory, even considered "human beings" at the time the "Founding Fathers" convened to inscribe these "extraordinary" principles.
In fact, it wasn't until the early "1970s" that these principles and rights even became applicable to "African-Americans," correct? In the face of "The New Jim Crow," which folks like "Kamala-Cop," Rev. Al Sharpton, Jesse Jackson, Sr., etc. gave their active support to, whom in their "right-mind" can seriously speak of a "true democracy" in this bastion of White male supremacy? Amerika, is what I define and refer to as a..."RUSPOCRISY."

Ruspocrisy = a systemic play of tricks or smoke & mirrors for the aim of deceiving the masses via White Male Oligarchy in total "full spectrum dominance."

"...Decisions over investment and production distribution ... are in the hands of a relatively CONCENTRATED NETWORK OF MAJOR CORPORATIONS and CONGLOMERATES and INVESTMENT FIRMS. They are also the ones WHO STAFF the MAJOR EXECUTIVE POSITIONS in the GOVERNMENT..."
-Noam Chomsky
(Manufacturing Consent, pp.5-6)

"...Unstated is that the responsible men gain status not by virtue of any special talent or knowledge but by WILLING SUBORDINATION to the SYSTEMS of ACTUAL POWER and LOYALTY to THEIR OPERATIVE PRINCIPLES--crucially, that BASIC DECISIONS over SOCIAL and ECONOMIC LIFE are to be KEPT WITHIN INSTITUTIONS WITH TOP-DOWN AUTHORITARIAN CONTROL ... Leaving basic decision-making within LARGELY UNACCOUNTABLE PRIVATE TYRANNIES, LINKED CLOSELY TO ONE ANOTHER and to A FEW POWER STATES..."
-Noam Chomsky
(Hegemony or Survival, p.6)

A "Right to Equal Protection under the Laws," "Due Process," "Fair and Impartial Trial," "Trial by a Jury of your Peers," "Right to Political Beliefs and to Freely Assemble," "Right to Vote," "Right to be Free of Cruel and Unusual Punishment," "Right to Remain Silent and have an Attorney present to Represent you," "Right to be Free of Illegal Search & Seizure," etc., how many of US truly give much weight to value--i.e., practical validity--to these so-called "Constitutional Rights?" Being from the "Hood," I remain one whom is ever "rooted in reality!" I know and have in fact experienced that "Political Rights," the "Right to be Free of Cruel and Unusual Punishment," the "Right to be Free of Illegal Search & Seizure," the "Right to Remain Silent and to have an Attorney present to represent you," etc. are of no real merit, when it's all said and done, especially as applied to the "Prison Industrial Slave Complex," where Black folks are validated in Security Housing Units ("SHU") or the equivalent of these across the country for "daring" to practice our "political Right."
We're acutely aware of the REALITY, that Black folks are TARGETED based on subscribing to, for example, the POLITICAL IDEOLOGY and WORLDVIEW that of the 1960s Black Panther Party, Republic of New Afrika, etc. In fact, up until 2010 or thereabout, Black prisoners were being validated and held in the SHU based on using POLITICAL and NATIONAL TERMS such as that of "New Afrikan," "New Afrika," etc. Also, for those whom possess the POLITICAL WORKS of George Lester Jackson e.g., Blood In My Eyes, Soledad Brothers, etc.--and documents related to "Black August," you're immediately TARGETED for "POLITICAL ATTACK."
For y'all whom are in the "dark," the original Black Panther Party of Huey P. Newton and Erica Huggins, the RNA, etc. are classified and deemed to be "GANGS" and "TERRORIST GROUPS." Yep, according to the White male Power Structure, Republicans and Democrats, the BPP members were engaged in "GANG ACTIVITY" and "TERRORISM," just as were the members of the RNA, if we let OUR ENEMIES "tell it!" So, in the "real world," their "Constitutional Rights" don't mean hardly anything since law enforcement, prison authorities, District Attorneys, Lawyers, Public Pretenders, etc. routinely disregard and abrogate or discard such "Rights," especially when it comes to "Have-Not!"
"We The People," ain't got ___ coming, when all is said and done, as is WHY so many of US are "PUT-TO-DEATH" via the State, spend many years in prison only later to be exonerated, etc.

"...The African-American...possessed the gift of 'second-sight in this American world,' an intuitive faculty (prelogical in a sense) enable him/her to see and say things about American society that possessed heightened moral validity. Because he dwelt equally in the MIND and HEART of HIS OPPRESSORS as in his OWN BEST PSYCHE, the African-American embraced a vision of the commonwealth at its best. But the gift was also DOUBLE-EDGED--ALWAYS POTENTIALLY ENERVATING--because the African-American ONLY SAW HIM/HERSELF REFLECTED FROM A WHITE SURFACE, A WORLD WHICH YIELDS TO HIM NO TRUE SELF-CONCIOUSNESS, BUT ONLY LETS HIM SEE HIMSELF THROUGH THE REVELATION OF THE OTHER WORLD..."
-David L. Lewis
(W.B.B Du Bois, Biography of a Race, p.307)

Well, it certainly seems to me, that this so-called "gift," really turned (and in fact still turns) out to be a "CURSE" for Black folks in this society, and hell, even in those countries where Black people were (remain via neo-colonialism) colonized-enslaved, since the reality is, TOO MANY OF US ARE MENTALLY and EMOTIONALLY ATTACHED TO OUR OPPRESSORS MINDS-VALUES and WORLDVIEWS = THEIR INTERESTS. This, in turn and indeed as intended, causes US to oppose and betray OUR OWN BASIC STRATEGIO-POLITICAL INTERESTS, and that of most of hte Wrold's as well, just ask "Kamala-Cop," Jesse Jackson, Sr., Rev. Al Sharpton and MANY OTHERS whom refuse to truly LIBERATE their PSYCHES...