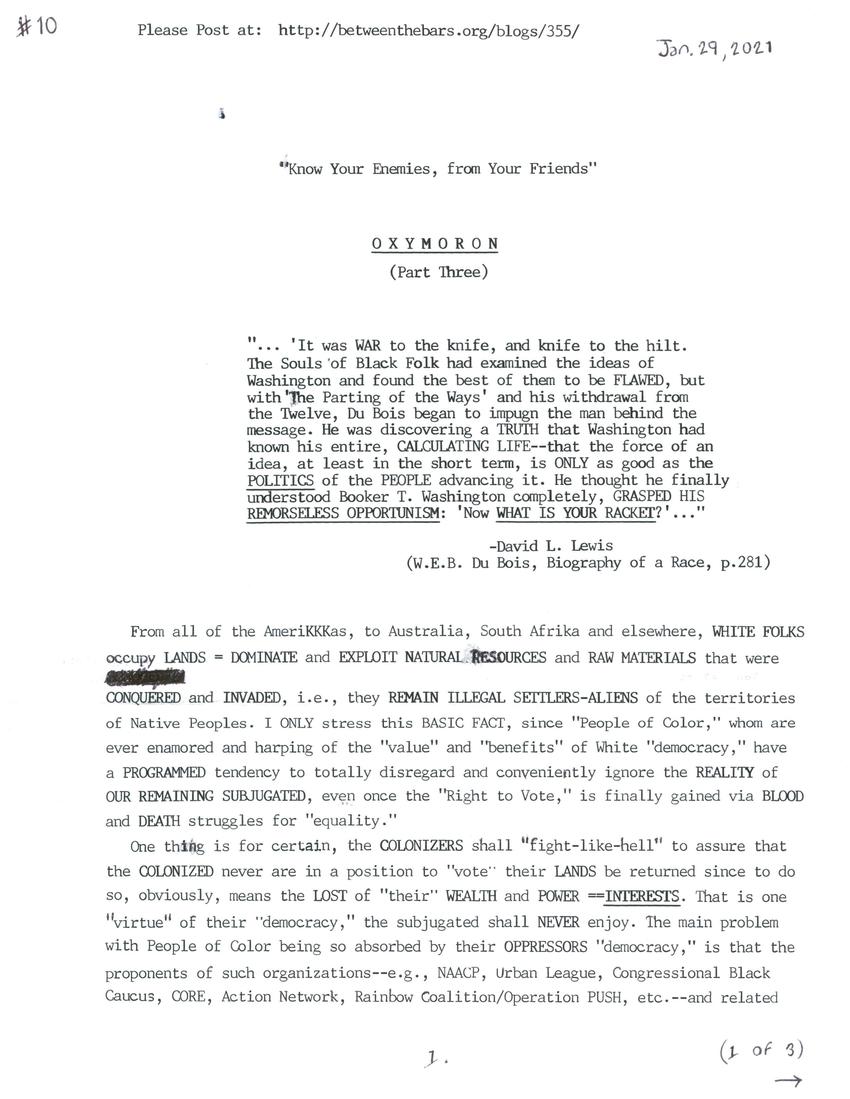 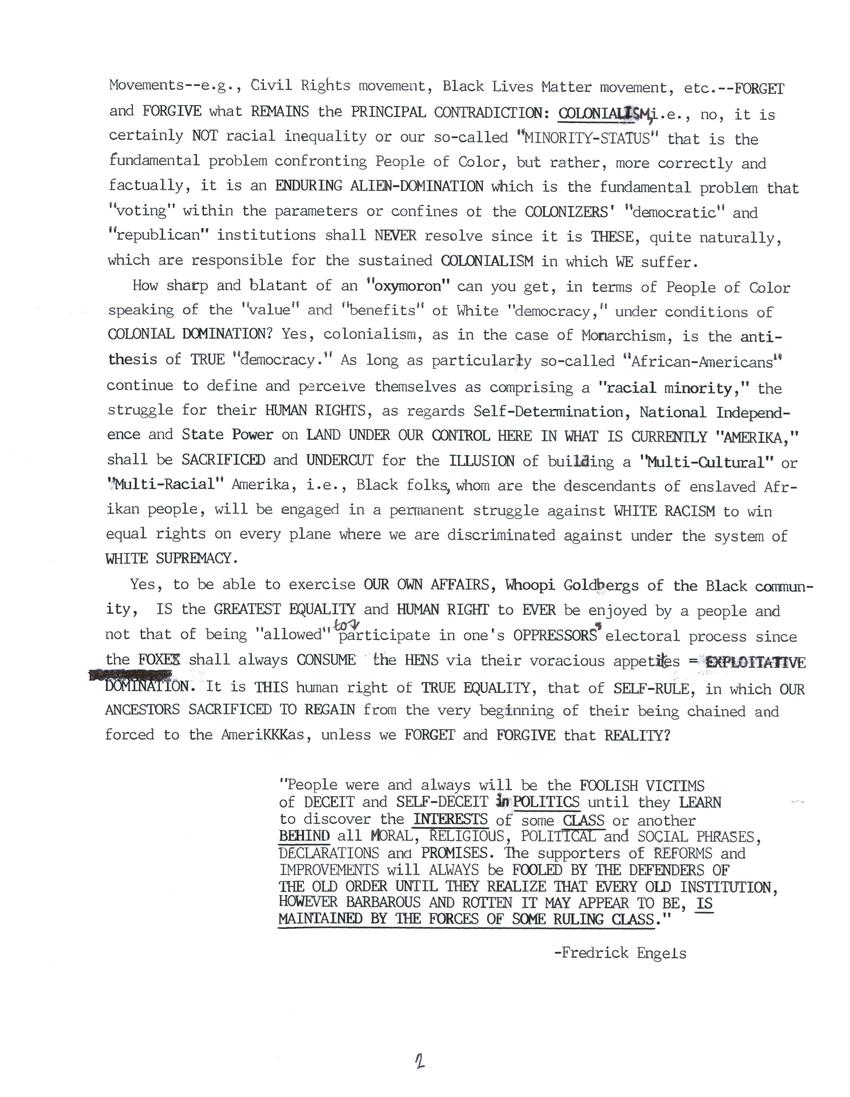 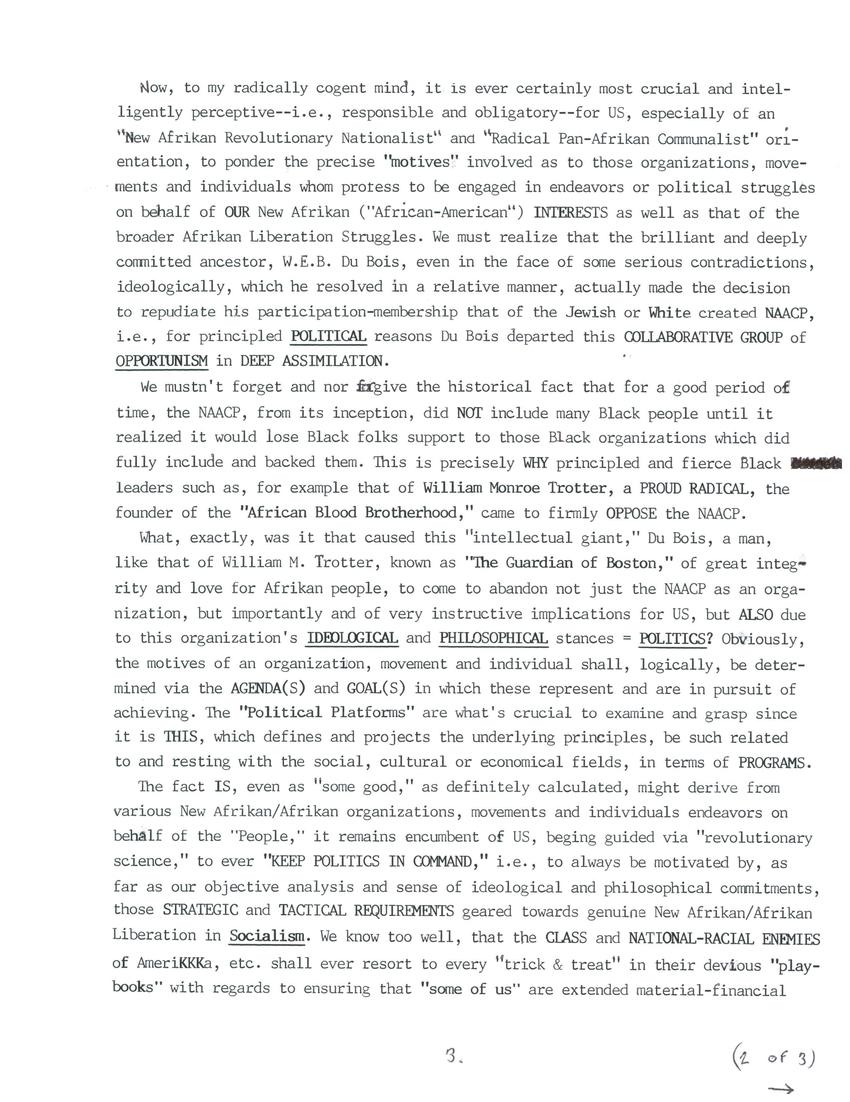 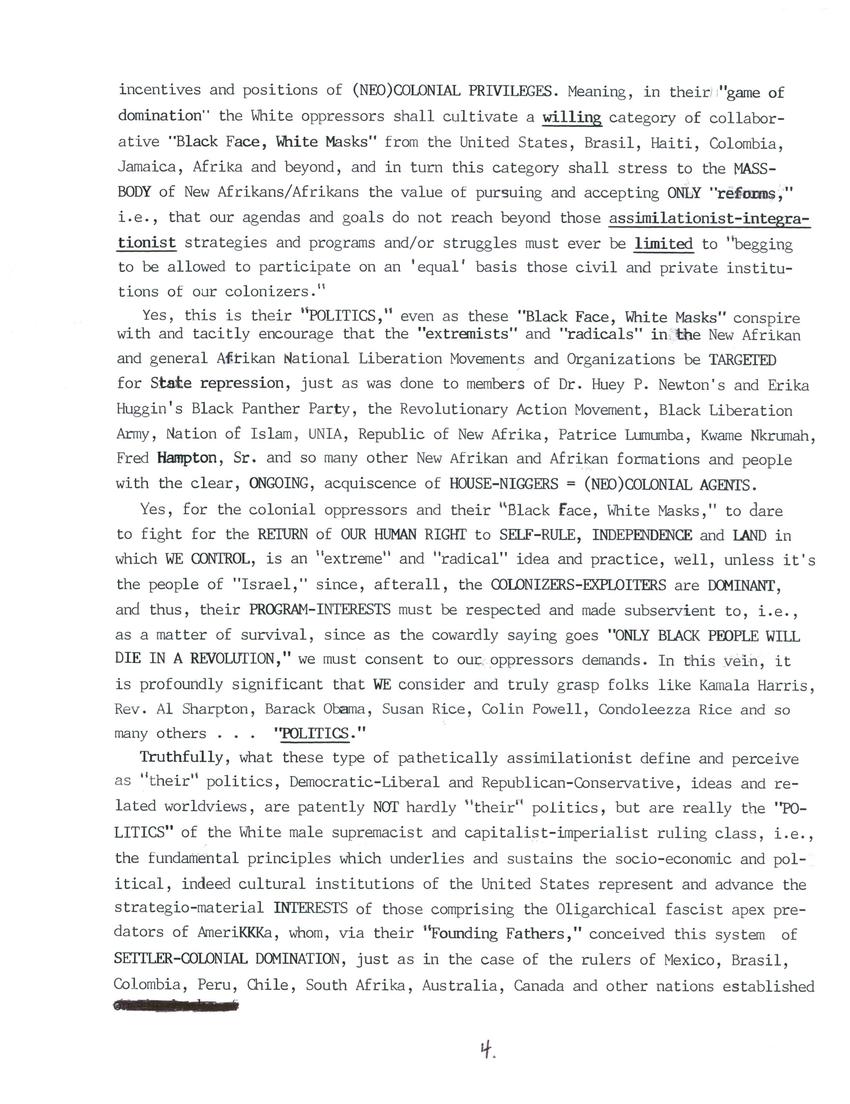 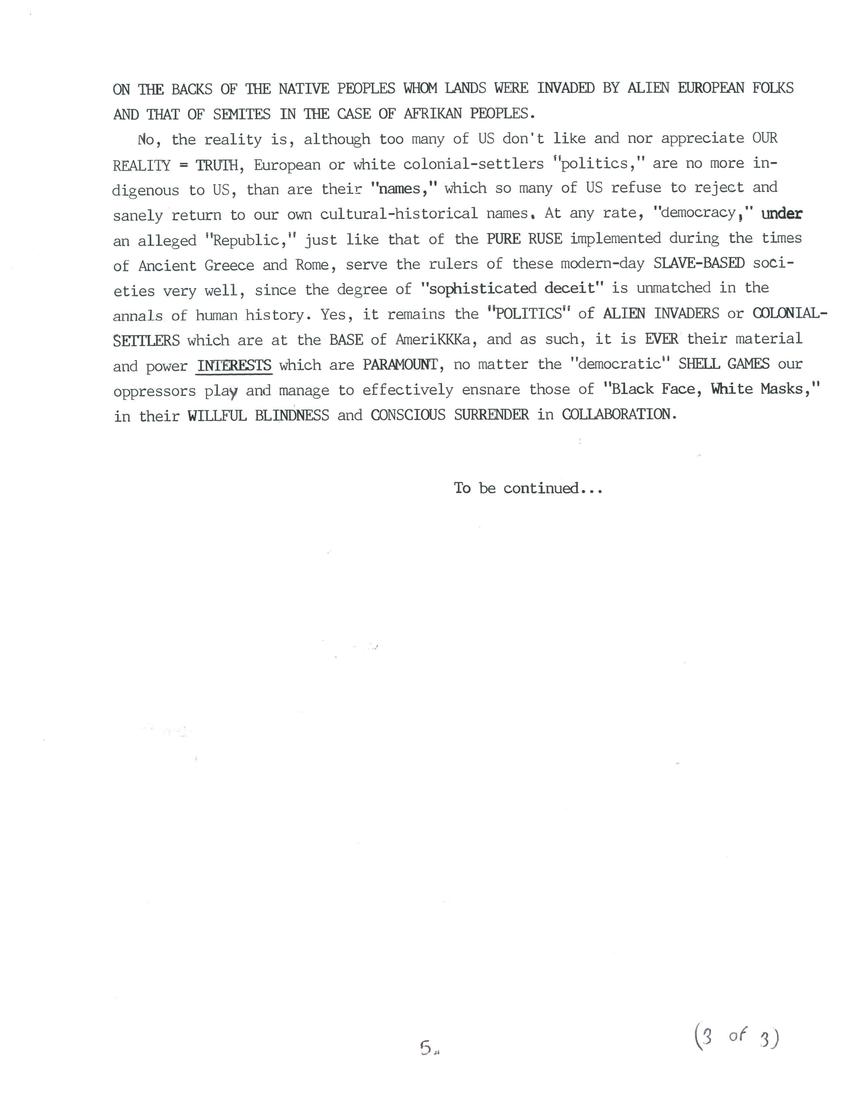 "... 'It was WAR to the knife, and knife to the hilt. The Souls of Black Folk had examined the ideas of Washington and found the best of them to be FLAWED, but with 'The Paring of the Ways' and his withdrawal from the Twelve, Du Bois began to impugn the man behind the message. He was discovering a TRUTH that Washington had known his entire, CALCULATING LIFE--that the force of an idea, at least in the short term, is ONLY as good as the POLITICS of the PEOPLE advancing it. He thought he finally understood Booker T. Washington completed, GRASPED HIS REMORSELESS OPPORTUNISM: 'Now WHAT IS YOUR RACKET?"... "
- Daivd L. Lewis
(W.E.B. Du Bois, Biography of a Race, p.281)

From all of the AmeriKKKas, to Australia, South Afrika and elsewhere, WHITE FOLKS occupy LANDS = DOMINATE and EXPLOIT NATURAL RESOURCES and RAW MATERIALS there were CONQUERED and INVADED, i.c., they REMAIN ILLEGAL SETTLERS-ALIENS of the territories of Native Peoples. I ONLY stress this BASIC FACT, since "People of Color," whom are ever enamored and harping of the "value" and "benefits" of White "democracy," have a PROGRAMMED tendency to totally disregard and conveniently ignore the REALITY of OUR REMAINING SUBJUGATED, even once the "Right to Vote," is finally gained via BLOOD and DEATH struggles for "equality."

One thing is for certain, the COLONIZERS shall "fight-like-hell" to assure that the COLONIZED never are in a position to "vote" their LANDS be returned since to do so, obviously, means the LOST of "their" WEALTH and POWER ==INTERESTS. That is one "virtue" of their "democracy," the subjugated shall NEVER enjoy. The main problem with People of Color being so absorbed by their OPPRESSORS "democracy," is that the proponents of such organizations--e.g., NAACP, Urban League, Congressional Black Caucus, CORE, Action Network, Rainbow Coalition/Operation PUSH, etc.--and related Movements--e.g., Civil Rights movement, Black Live Matter movements, etc.--FORGET and FORGIVE what REMAINS the PRINCIPAL CONTRADICTION: COLONIALISM, i.e., no, it is certainly NOT racial inequality or our so-called "MINORITY-STATUS" that is the fundamental problem confronting People of Color, but rather, more correctly and factually, it is an ENDURING ALIEN-DOMINATION which is the fundamental problem that "voting" within the parameters or confines of the COLONIZERS' "democratic" and "republican" institutions shall NEVER resolve since it is THESE, quite naturally, which are responsible for the sustained COLONIALISM in which WE suffer.

How sharp and blatant of an "oxymoron" can you get, in terms of People of Color speaking of the "value" and "benefits" of White "democracy," under conditions of COLONIAL DOMINATION? Yes, colonialism, as in the case of Monarchism, is the anti-thesis of TRUE "democracy." As long as particularly so-called "African-Americans" continue to define and perceive themselves as comprising a "racial minority," the struggle for their HUMAN RIGHTS, as regards Self-Determination, National Independence and State Power on LAND UNDER OUR CONTROL HERE IN WHAT IS CURRENTLY "AMERIKA," shall be SACRIFICED and UNDERCUT for the ILLUSION of building a "Multi-Cultural" or "Multi-Racial" Amerika, i.e., Black folks, whom are the descendants of enslaved Afrikan people, will be engaged in a permanent struggle against WHITE RACISM to win equal rights on every plane where we are discriminated against under the system of WHITE SUPREMACY.

Yes, to be able to exercise OUR OWN AFFAIRS, Whoopi Goldbergs of the Black community, IS the GREATEST EQUALITY and HUMAN RIGHT to EVER be enjoyed by a people and not that of being "allowed" to participate in one's OPPRESSORS' electoral process since the FOXES shall always CONSUME the HENS via their voracious appetites = EXPLOITATIVE DOMINATION. It is THIS human right of TRUE EQUALITY, that of SELF-RULE, in which OUR ANCESTORS SACRIFICED TO REGAIN from the very beginning of their being chained and forced to the AmeriKKKas, unless we FORGET and FORGIVE that REALITY?

"People were and always will be the FOOLISH VICTIMS of DECEIT and SELF-DECEIT in POLITICS until they LEARN to discover the INTERESTS of some CLASS or another BEHIND all MORAL, RELIGIOUS, POLITICAL and SOCIAL PHRASES, DECLARATIONS and PROMISES. The supporters of REFORMS and IMPROVEMENTS will ALWAYS be FOOLED BY THE DEFENDERS OF THE OLD ORDER UNTIL THEY REALIZE THAT EVERY OLD INSTITUTION, HOWEVER BARBAROUS AND ROTTEN IT MAY APPEAR TO BE, IS MAINTAINED BY THE FORCES OF SOME RULING CLASS."
- Fredrick Engels

Now, to my radically cogent mind, it is ever certainly most crucial and intelligently perceptive--i.e., responsible and obligatory--for US, especially of an "New Afrikan Revolutionary Nationalist" and "Radical Pan-Afrikan Communalist" orientation, to ponder the praise "motives" involved as to those organizations, movements and individuals whom profess to be engaged in endeavors or political struggles on behalf of OUR New Afrikan ("African-American") INTERESTS as well as that of the broader Afrikan Liberation Struggle. We must realize that the brilliant and deeply committed ancestor, W.E.B. Du Bois, even in the face of some serious contradictions, ideologically, which he resolved in a relative manner, actually made the decision to repudiate his participation-membership that of the Jewish or White created NAACP, i.e., for principled POLITICAL reasons Du Bois departed this COLLABORATIVE GROUP of OPPORTUNISM in DEEP ASSIMILATION.

We mustn't forget and nor forgive the historical fact that for a good period of time, the NAACP, from its inception, did NOT include many Black people until it realized it would lose Black folks support to those Black organizations which did fully include and backed them. This is precisely WHY principled and fierce Black leaders such as, for example that of William Monroe Trotter, a PROUD RADICAL, the founder of the "African Blood Brotherhood," came to firmly OPPOSE the NAACP.

What, exactly, was it that caused this "intellectual giant," Du Bois, a man, like that of William M. Trotter, known as "The Guardian of Boston," of great integrity and love for Afrikan people, to come to abandon no just the NAACP as an organization, but importantly and of very instructive implications for US, but ALSO due to this organization's IDEOLOGICAL and PHILOSOPHICAL stances = POLITICS? Obviously, the motives of an organization, movement and individual shall, logically, be determined via the AGENDA(S) and GOAL(S) in which these represent and are in pursuit of achieving. The "Political Platforms" are what's crucial to examine and grasp since it is THIS, which defines and projects the underlying principles, be such related to and resting with the social, cultural or economical fields, in terms of PROGRAMS.

The fact IS, even as "some good," as definitely calculated, might derive from various New Afrikan/Afrikan organizations, movements and individuals endeavors on behalf of the "People," it remains incumbent of US, being guided via "revolutionary science," to ever "KEEP POLITICS IN COMMAND," i.e., to always be motivated by, as far as our objective analysis and sense of ideological and philosophical commitments, those STRATEGIC and TACTICAL REQUIREMENTS geared towards genuine New Afrikan/Afrikan Liberation in Socialism. We know too well, that the CLASS and NATIONAL-RACIAL ENEMIES of AmeriKKKa, etc. shall ever resort to every "trick & treat" in their devious "play-books" with regards to ensuring that "some of us" are extended material-financial incentives and positions of (NEO)COLONIAL PRIVILEGES. Meaning, in their "game of domination" the White oppressors shall cultivate a willing category of collaborative "Black Face, White Masks" from the United States, Brasil, Haiti, Colombia, Jamaica, Afrika and beyond, and in turn this category shall stress to the MASS-BODY of New Afrikans/Afrikans the value of pursuing and accepting ONLY "reforms," i.e., that our agendas and goals do not reach beyond those assimilationist-integrationist strategies and programs and/or struggles must ever be limited to "begging to be allowed to participate on an 'equal' basis those civil and private institutions of our colonizers."

Yes, this is their "POLITICS," even as these "Black Face, White Masks" conspire with and tacitly encourage that the "extremists" and "radicals" in the New Afrikan and general Afrikan National Liberation Movements and Organization be TARGETED for State repression, just as was done to members of Dr. Huey P. Newton's and Erika Huggin's Black Panter Party, the Revolutionary Action Movement, Black Liberation Army, Nation of Islam, UNIA, Republic of New Afrika, Patrice Lumumba, Kwame Nkrumah, Fred Hampton, Sr. and so many other New Afrikan and Afrikan formations and people with the clear, ONGOING, acquiescence of HOUSE-NIGGERS = (NEO)COLONIAL AGENTS.

Yes, for the colonial oppressors and their "Black Face, White Masks," to dare to fight for the RETURN of OUR HUMAN RIGHT to SELF-RULE, INDEPENDENCE and LAND in which WE CONTROL, is an "extreme" and "radical" idea and practice, well, unless, it's the people of "Israel," since, after all, the COLONIZERS-EXPLOITERS are DOMINANT, and thus, their PROGRAM-INTERESTS must be respected and made subservient to, i.e., as a matter of survival, since as the cowardly saying goes "ONLY BLACK PEOPLE WILL DIE IN A REVOLUTION," we must consent to our oppressors demands. In this vein, it is profoundly significant that WE consider and truly grasp folks like Kamala Harris, Rev. Al Sharpton, Barack Obama, Susan Rice, Colin Powell, Condoleezza Rice and so many others... "POLITICS".

Truthfully, what these type of pathetically assimilationist define and perceive as "their" politics, Democratic-Liberal and Republican-Conservative, ideas and related worldview, are patently NOT hardly "their" politics, but are really the "POLITICS" of the White male supremacist and capitalist-imperialist ruling class, i.e., the fundamental principles which underlies and sustains the socio-economic and political, indeed cultural institutions of the United States represent and advance the strategio-material INTERESTS of those comprimising the Oligarchical fascist apex predators of AmeriKKKa, whom, vis their "Founding Fathers," conceived this system of SETTLER-COLONIAL DOMINATION, just as in the case of the rulers of Mexico, Brasil, Colombia, Peru, Chile, South Afrika, Australia, Canada and other nations established ON THE BACKS OF THE NATIVE PEOPLES WHOM LANDS WERE INVADED BY ALIEN EUROPEAN FOLKS AND THAT OF SEMITES IN THE CASE OF AFRIKAN PEOPLES.

No, the reality is, although too many of US don't like and nor appreciate OUR REALITY = TRUTH, European or white colonial-settlers "politics," are no more indigenous to US, that are their "names," which so many of US refuse to reject and sanely return to our own cultural-historical names. At any rate, "democracy," under an alleged "Republic," just like that of the PURE RUSE implemented during the times of Ancient Greece and Rome, serve the rulers of these modern-day SLAVE-BASED societies very well, since the degree of "sophisticated deceit" is unmatched in the annals of human history. Yes, it remains the "POLITICS" of ALIEN INVADERS or COLONIAL-SETTLERS which are at the BASE of AmeriKKKa, and as such, it is EVER their material and power INTERESTS which are PARAMOUNT, no matter the "democratic" SHELL GAMES our oppressors play and manage to effectively ensnare those of "Black Face, White Masks," in their WILLFUL BLINDNESS and CONSCIOUS SURRENDER in COLLABORATION.