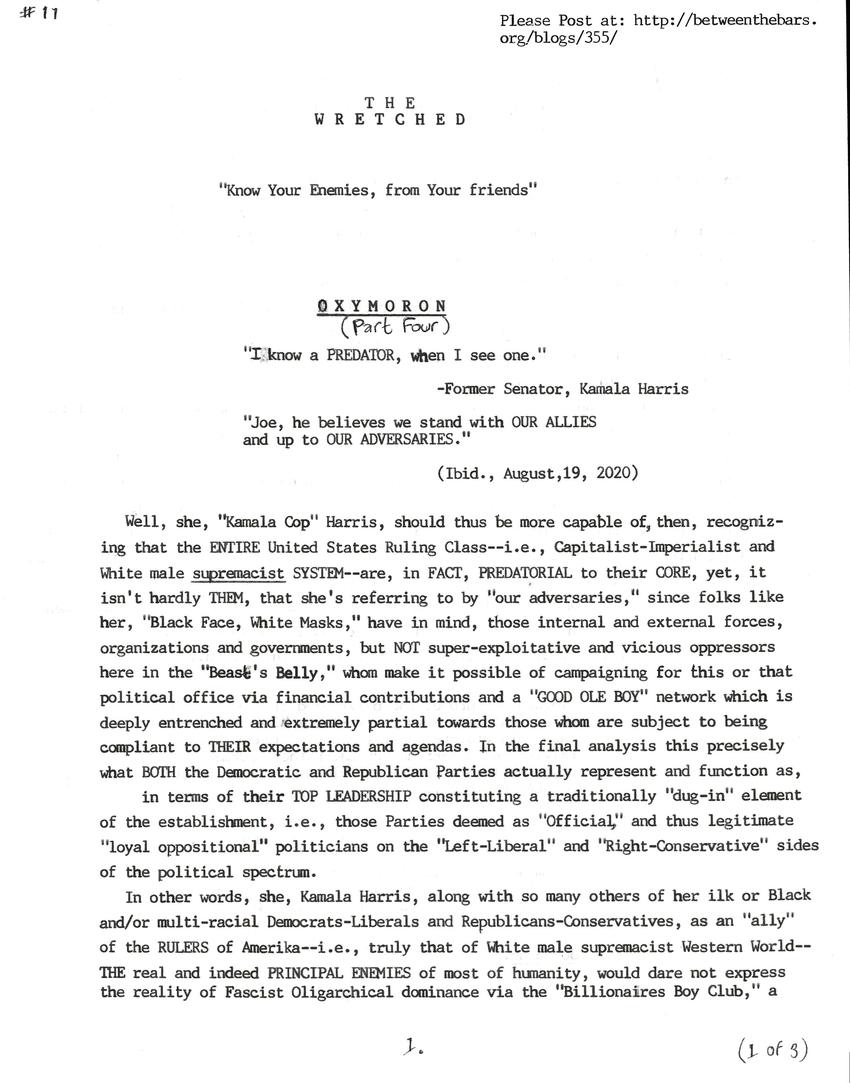 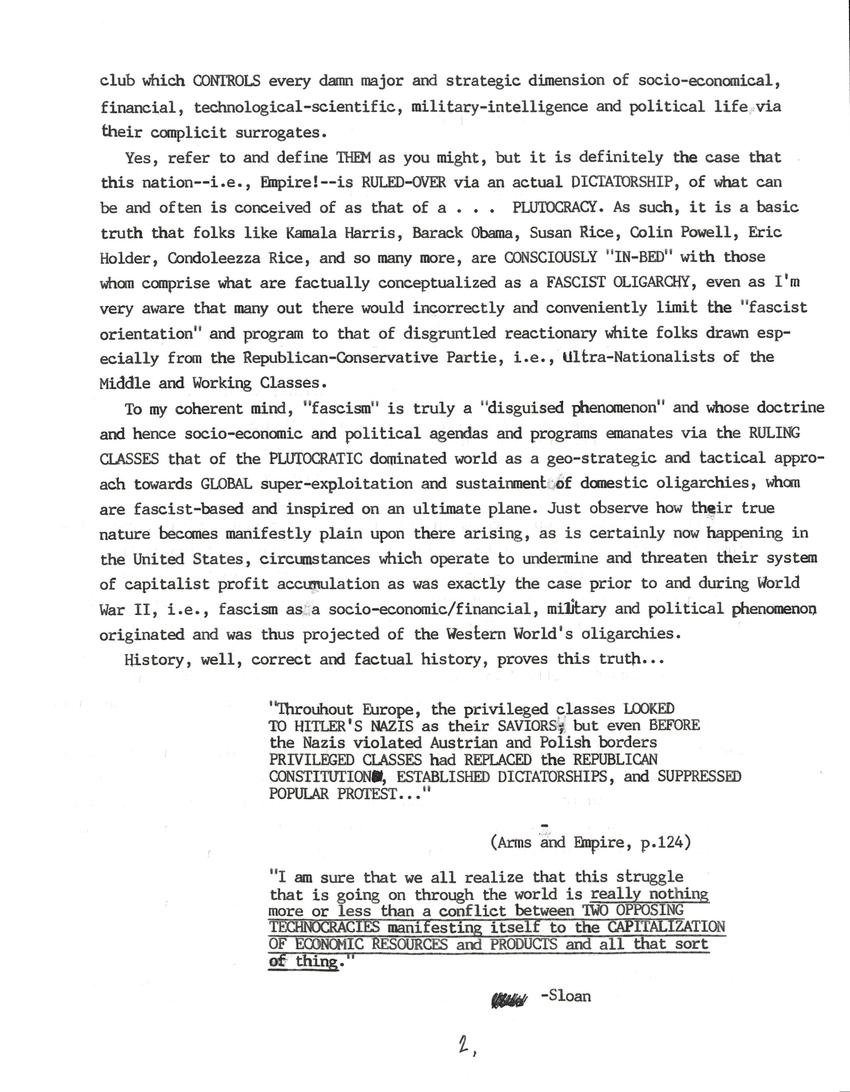 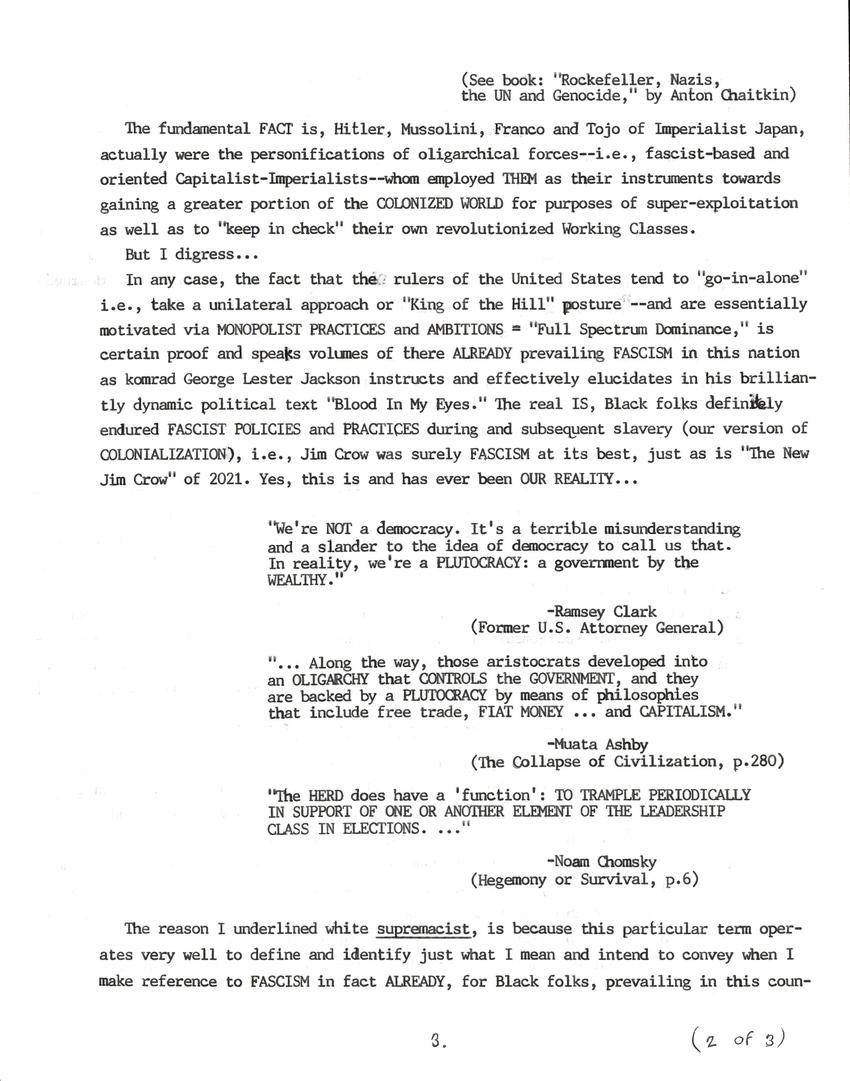 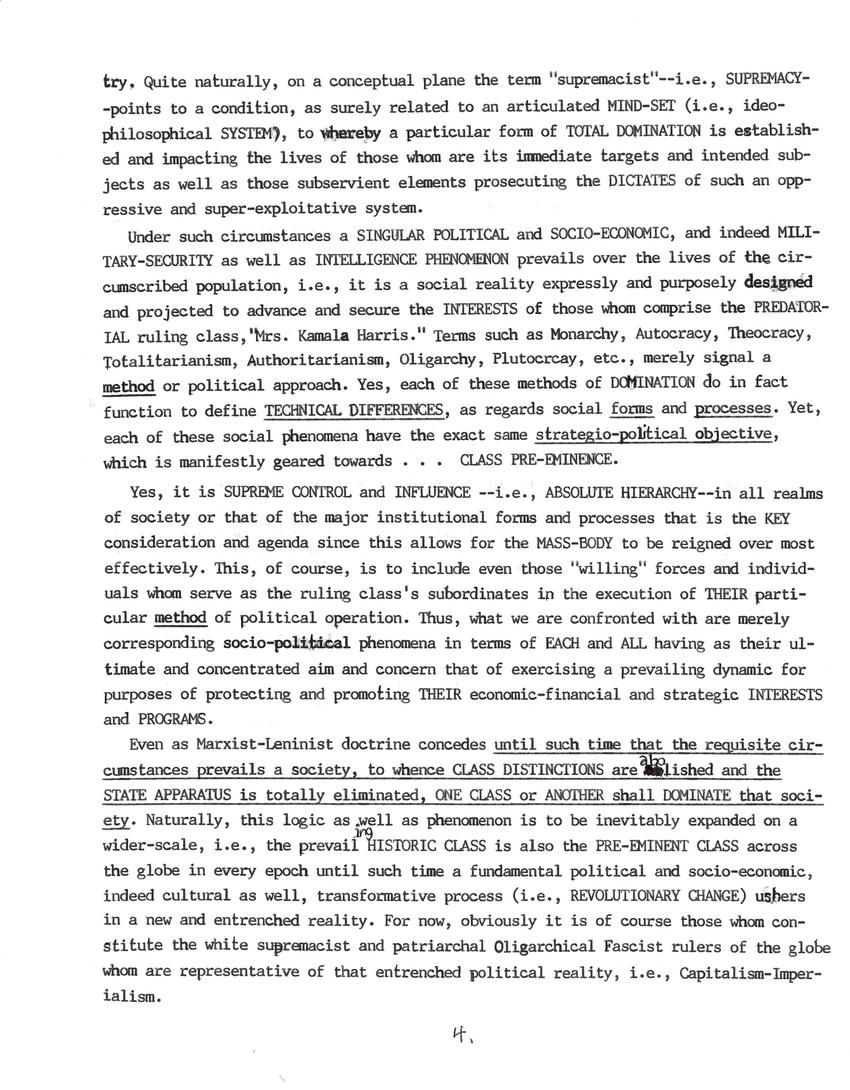 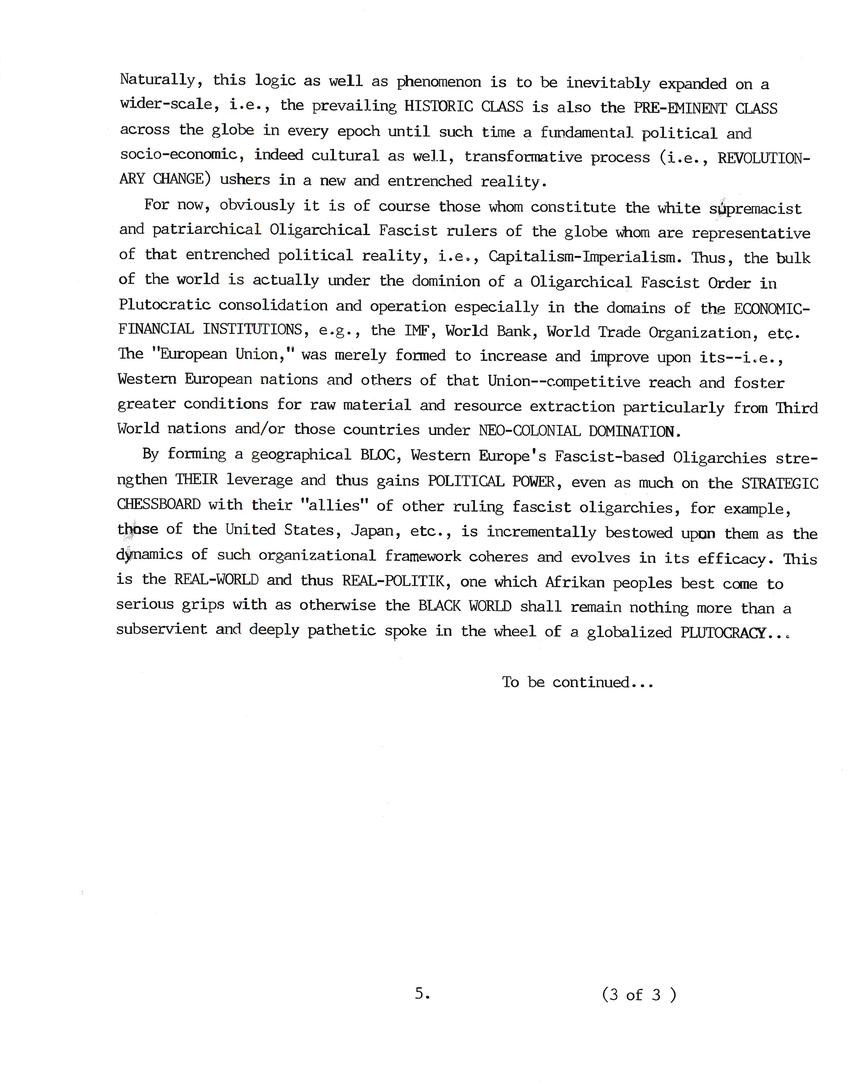 "know your enemies, from your friends"

OXYMORON
(part four)
"I know a PREDATOR, when I see one." -Former Senator, Kamala Harris

Well, she, "Kamala Cop" Harris, should thus be more capable of, then, recognizing that the ENTIRE United States Ruling Class--i.e., Capitalist-Imperialist and White male supremacist SYSTEM--are, in FACT, PREDATORIAL to their CORE, yet, it isn't hardly THEM, that she's referring to by "our adversaries," since folks like her, "Black Face, White Masks," have in mind, those internal and external forces, organizations and governments, but NOT super-exploitative and vicious oppressors her in the "Beast's Belly," whom make it possible of campaigning for this or that political office via financial contributions and a "GOOD OLE BOY" network which is deeply entrenched and extremely partial towards those whom are subject to being compliant to THEIR expectations and agendas. In the final analysis this precisely what BOTH the Democratic and Republican Parties actually represent and function as,
in terms of their TOP LEADERSHIP constituting a traditionally "dug-in" element of the establishment, i.e., those Parties deemed as "Official," and thus legitimate "loyal oppositional" politicians on the "Left-Liberal" and "Right-Conservative" sides of the political spectrum.

In other words, she, Kamala Harris, along with so many others of her ilk or Black and/or multi-racial Democrats-Liberals and Republicans-Conservatives, as an "ally" of the RULERS of Amerika--i.e., truly that of White male supremacist Western World--THE real and indeed PRINCIPLA ENEMIES of most of humanity, would dare not express the reality of Fascist Oligarchical dominance via the "Billionaires Boy Club," a club which CONTROLS every damn major and strategic dimension of socio-economical, financial, technological-scientific, military-intelligence and political life via their complicit surrogates.

Yes, refer to and define THEM as you might, but it is definitely the casee that this nation--i.e., Empire!--is RULED-OVER via an actual DICTATORSHIP, of what can be and often is conceived of as that of a ...PLUTOCRACY. As such, it is a basic truth that folks like Kamala Harris, Barack Obama, Susan Rice, Colin Powell, Eric Holder, Condoleezza Rice, and so many more and CONSCIOUSLY "IN-BED" with those whom comprise what are factually conceptualized as a FASCIST OLIGARCHY, even as I'm very aware that many out there would incorrectly and conveniently limit the "fascist orientation" and program to that of disgruntled reactionary white folks drawn especially from the Republican-Conservative Partie, i.e., Ultra-Nationalists of the Middle and Working Classes.

To my coherent mind, "fascism" is truly a "disguised phenomenon" and whose doctrine and hence socio-economic and political agendas and programs emanates via the RULING CLASSES that of a PLUTOCRATIC dominated world as a geo-strategic and tactical approach towards GLOBAL super-exploitation and sustainment of domestic oligarchies, whom are fascist-based and inspired on an ultimate plane. Just observe how their true nature becomes manifestly plain upon there arising, as is certainly now happening in the United States, circumstances which operate to undermine and threaten their system of capitalist profit accumulation as was exactly the case prior to and during World War II, i.e., fascism as a socio-economic/financial, military and political phenomenon originated and was thus projected of the Western World's oligarchies. History, well, correct and factual history, proves this truth...

"Throuhout Europe, the privileged classes LOOKED TO HITLER'S NAZIS as their SAVIORS, but even BEFORE the Nazis violated Austrian and Polish borders PRIVILEGED CLASSES had REPLACED the REPUBLICAN CONSTITUTION, ESTABLISHED DICTATORSHIPS, and SUPPRESSED POPULAR PROTEST..."
(Arms and Empire, p.124)

"I am sure that we all realize that this struggle that is going on through the world is really nothing more or less than a conflict between TWO OPPOSING TECHNOCRACIES manifesting itself to the CAPITALIZATION OF ECONOMIC RESOURCES and PRODUCTS and all that sort of thing."
-Sloan

The fundamental FACT is, Hitler, Mussolini, Franco and Tojo of Imperialist Japan, actually were the personifications of oligarchical forces--i.e., fascist-based and oriented Capitalist-Imperialists--whom employed THEM as their instruments towards gaining a greater portion of the COLONIZED WORLD for purposes of super-exploitation as well as to "keep in check" their own revolutionized Working Classes.
But I digress...
In any case, the fact that the rulers of the United States tend to "go-in-alone" i.e., take a unilateral approach or "King of Hill" posture --and are essentially motivated via MONOPOLIST PRACTICES and AMBITIONS = "Full Spectrum Dominance," is certain proof and speaks volumes of there ALREADY prevailing FASCISM in this nation as komrad George Lester Jackson instructs and effectively elucidates in his brilliantly dynamic political text "Blood In My Eyes." The real IS, Black folks definitely endured FASCIST POLICIES and PRACTICES during and subsequent slavery (our version of COLONIALIZATION), i.e., Jim Crow was surely FASCISM at its best, just as is "The New Jim Crow" of 2021. Yes, this is and has ever been OUR REALITY...

"We're NOT a democracy. It's a terrible misunderstanding and a slander to the idea of democracy to call us that. In reality, we're a PLUTOCRACY: a government by the WEALTHY."
-Ramsey Clark (Former U.S. Attorney General)

"...Along the way, those aristocrats developed into an OLIGARCHY that CONTROLS the GOVERNMENT, and they are backed by a PLUTOCRACY by means of philosophies that include free trade, FIAT MONEY...and CAPITALISM."
-Muata Ashby (The Collapse of Civilization, p.280)

"The HERD does have a 'function': TO TRAMPLE PERIODICALLY IN SUPPORT OF ONE OR ANOTHER ELEMENT OF THE LEADERSHIP CLASS IN ELECTIONS..."
-Noam Chomsky (Hegemony or Survival, p.6)

The reason I underlined white supremacist, is because this particular term operates very well to define and identify just what I mean and intend to convey when I make reference to FASCISM in fact ALREADY, for Black folks, prevailing in this country. Quite naturally, on a conceptual plane the term "supremacist"--i.e., SUPREMACY--points to a condition, as surely related to an articulated MIND-SET (i.e., ideo-philosophical SYSTEM), to whereby a particular form of TOTAL DOMINATION is established and impacting the lives of those whom are its immediate targets and intended subjects as well as those subservient elements prosecuting the DICTATES of such an oppressive and super-exploitative system.

Under such circumstances a SINGULAR POLITICAL and SOCIO-ECONOMIC, and indeed MILITARY-SECURITY as well as INTELLIGENCE PHENOMENON prevails over the lives of the circumscribed population, i.e., it is a social reality expressly and purposely designed and projected to advance and secure the INTERESTS of those whom comprise the PREDATORIAL ruling class, "Mrs. Kamala Harris." Terms such as Monarchy, Autocracy, Theocracy, Totalitarianism, Authoritarianism, Oligarchy, Plutocracy, etc., merely signal a method or political approach. Yes, each of these mmethods of DOMINATION do in fact function to define TECHNICAL DIFFERENCES, as regards social forms and processes. Yet, each of these social phenomena havve the exact same strategio-political objective, which is manifestly geared towards...CLASS PRE-EMINENCE.

Yes, it is SUPREME CONTROL and INFLUENCE --i.e., ABSOLUTE HIERARCHY--in all realms of society or that of the major institutional forms and processes that is the KEY consideration and agenda since this allows for the MASS-BODY to be reigned over most effectively. This, of course, is to include even those "willing" forces and individuals whom serve as the ruling class's subordinates in the execution of THEIR particular method of political operation. Thus, what we are confronted with are merely corresponding socio-political phenomena in terms of EACH and ALL having as their ultimate and concentrated aim and concern that of exercising a prevailing dynamic for purposes of protecting and promoting THEIR economic-financial and strategic INTERESTS and PROGRAMS.

Even as Marxist-Leninist doctrine concedes until such time that the requisite circumstances prevails a society, to whence CLASS DISTINCTIONS are abolished and the STATE APPARATUS is totally eliminated, ONE CLASS or ANOTHER shall DOMINATE that society. Naturally, this logic as well as phenomenon is to be inevitably expanded on a wider-scale, i.e., the prevailing HISTORIC CLASS is also the PRE-EMINENT CLASS across the globe in every epoch until such time a fundamental political and socio-economic, indeed cultural as well, transformative process (i.e., REVOLUTIONARY CHANGE) ushers in a new and entrenched reality. For now, obviously it is of course those whom constitute the white supremacist and patriarchal Oligarchical Fascist rulers of the globe whom are representative of that entrenched political reality, i.e., Capitalism-Imperialism.

For now, obviously it is of course those whom constitute the white supremacist and patriarchal Oligarchical Fascist rulers of the globe whom are representative of that entrenched political reality, i.e., Capitalism-Imperialism. Thus, the bulk of the world is actually under that dominion of a Oligarchical Fascist Order in Plutocratic consolidation and operation especially in the domains of the ECONOMIC FINANCIAL INSTITUTIONS, e.g., the IMF, World Bank, World Trade Organization, etc. The "European Union," was merely formed to increase and improve upon its--i.e., Western European nations and others of that Union--competitive reach and foster greater conditions for raw material and resource extraction particularly from Third World nations and/or those countries under NEO-COLONIAL DOMINATION.

By forming a geographical BLOC, Western Europe's Fascist-based Oligarchies strengthen THEIR leverage and thus gains POLITICAL POWER, even as much on the STRATEGIC CHESSBOARD with their "allies" of other ruling fascist oligarchies, for example, those of the United States, Japan, etc., is incrementally bestowed upon them as the dynamics of such organizational framework coheres and evolves in its efficacy. This is the REAL-World and thus REAL-POLITIK, one which Afrikan peoples best come to serious grips with as otherwise the BLACK WORLD shall remain nothing more than a subservient and deeply pathetic spoke in the wheel of a globalized PLUTOCRACY...

This is very deep ..