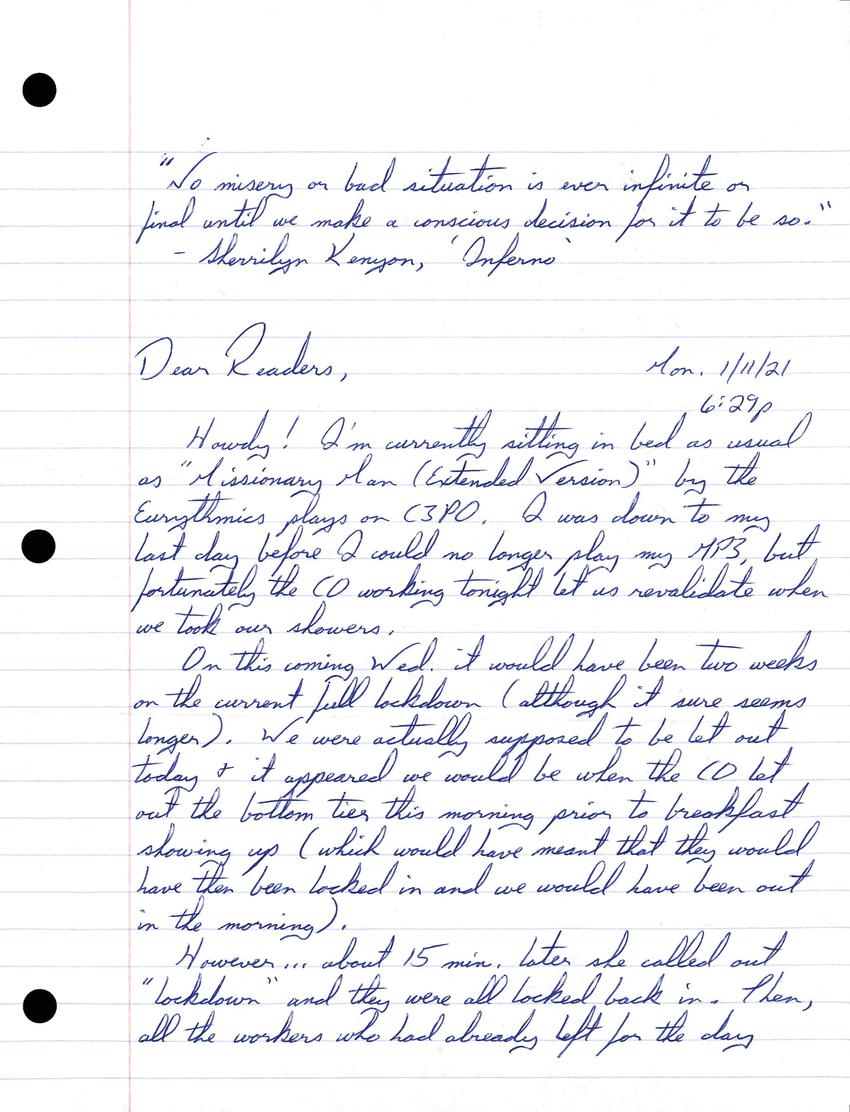 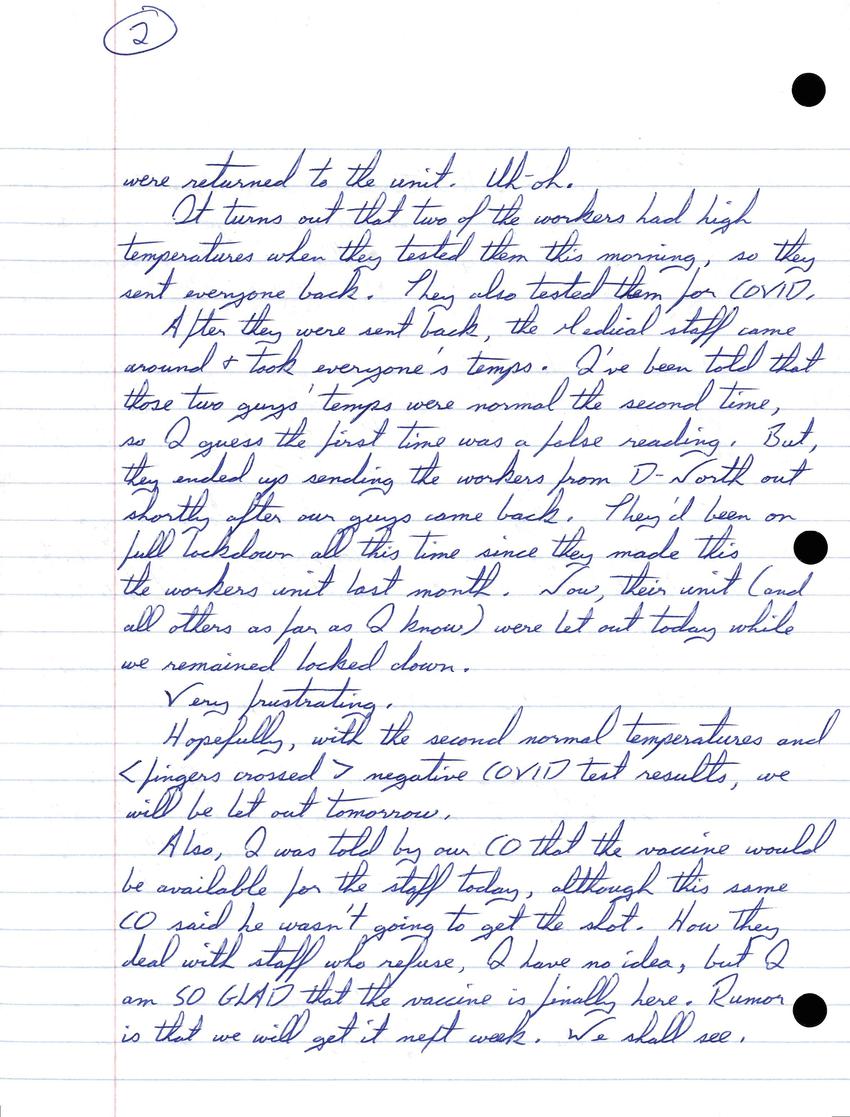 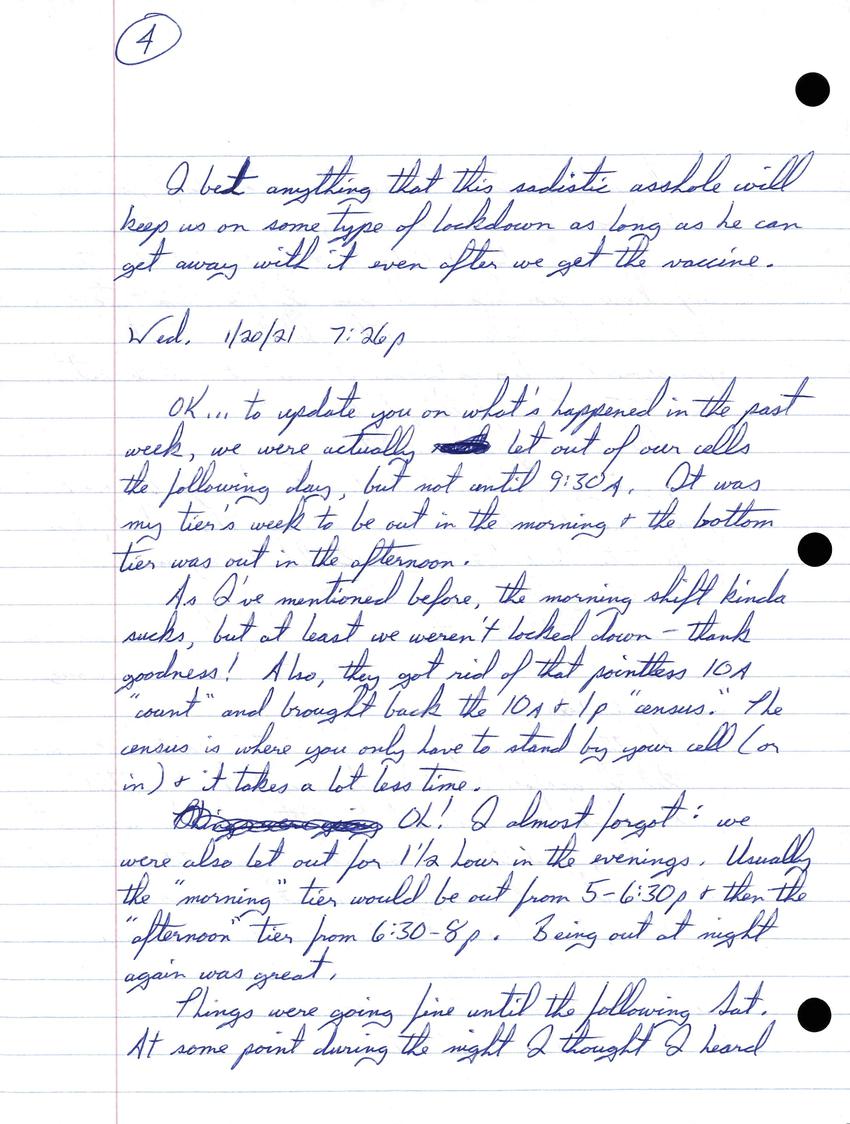 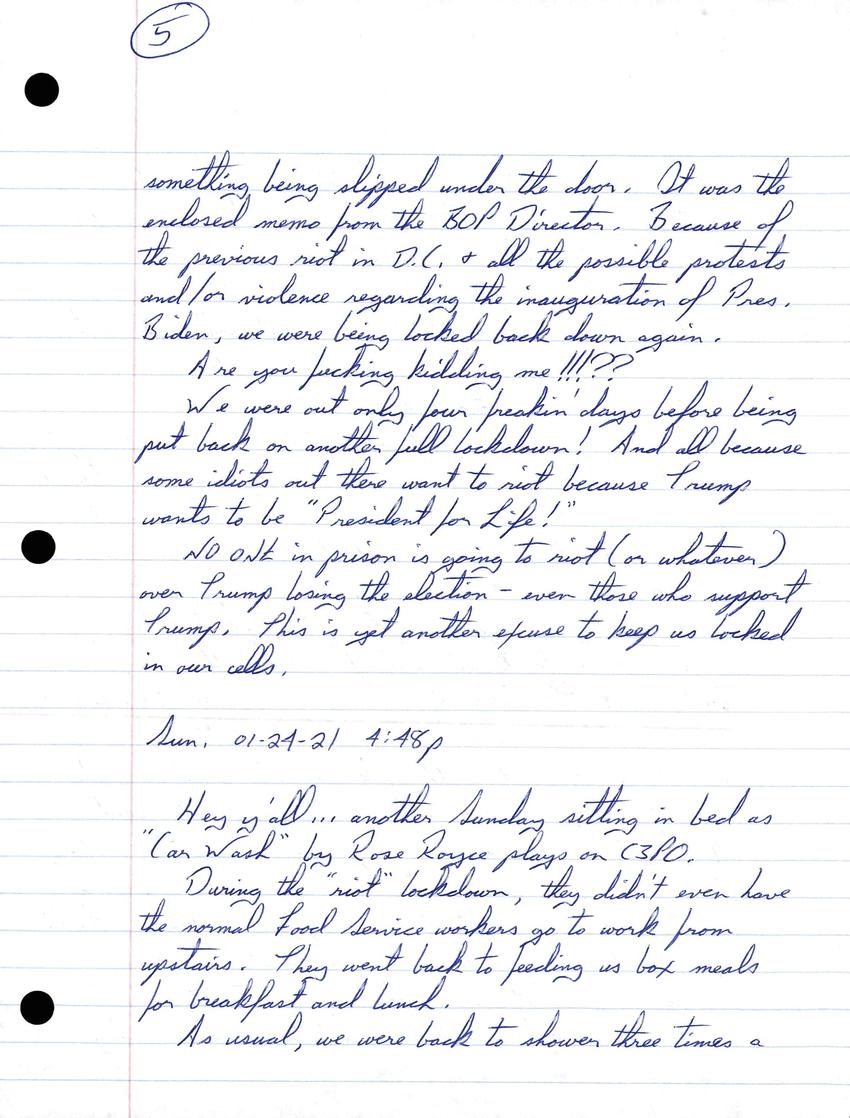 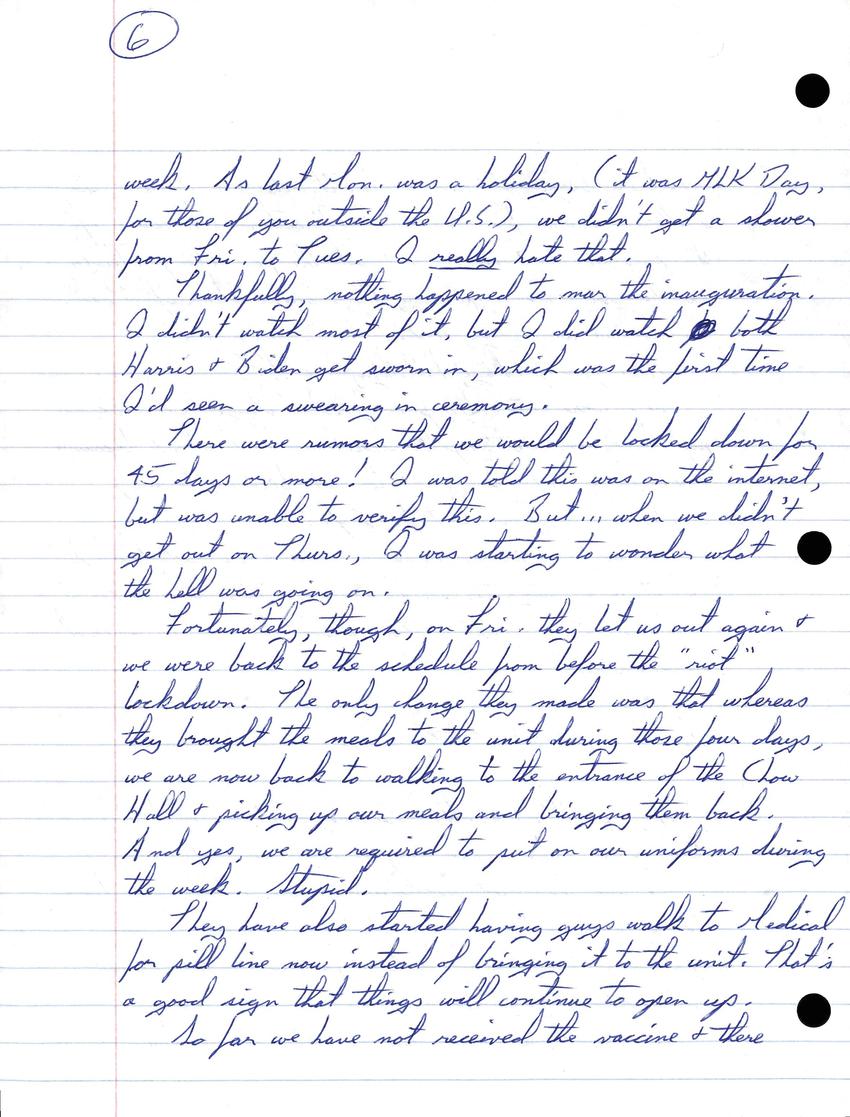 "No misery or bad situation is even infinite or final until we make a conscious decision for it to be so."
- Sherrilyn Kenyon, "Inferno"

Howdy! I'm currently sitting in bed as usual as "Missionary Man (Extended Version)" by the Eurythmics plays on C3PO. I was down to my last day before I could no longer play my MP3, but fortunately the CO working tonight let us revalidate when we took our showers.
On this coming Wed. it would have been two weeks on the current full lockdown (although it sure seems longer). We were actually supposed to be let out today + it appeared we would be when the CO let out the bottom ties this morning prior to breakfast showing up (which would have meant that they would have then been locked in and we would have been out in the morning).
However...about 15 min. later she called out "lockdown" and they were all locked back in. Then, all the workers who had already left for the day were returned to the unit. Uh-oh.
It turns out that two of the workers had high temperatures when they tested them this morning, to they sent everyone back. They also tested them for COVID.
After they were sent back, the Medical staff came around + took everyone's temps. I've been told that these two guys' temps were normal the second time, as I guess the first time was a false reading. But, they ended up sending the workers from D-North out shortly after our guys came back. They'd been on full lockdown all this time since they made this the workers unit last month. Now, their unit (and all others as far as I know) were let out today while we remained locked down.
Very frustrating.
Hopefully, with the second normal temperatures and <fingers crossed> negative COVID test results, we will be let out tomorrow.
Also, I was told by our CO that the vaccine would be available for the staff today, although this same CO said he wasn't going to get the shot. How they deal with staff who refuse, I have no idea, but I am SO GLAD that the vaccine is finally here. Rumor is that we will get it next week. We shall see.
Something I forgot to mention in my last posting is that when we had commissary last week, they brought all our bags + lists back and said they they upped our spending limit from the $25 limit to $50. Fifty dollars is still bullshit + is still punishment as far as I see it, but it's still better than $25. Twice better, to be exact. :)
It didn't affect me either way 'cause I was only getting the items didn't show up two weeks prior when I shopped for someone else, but it's still total bullshit + we shouldn't be punished 'cause the staff bring COVID in here.
I was told that they reconnected the chargers for the MP3s, but I wasn't out of the cell long enough to verify this.
Another screwed up thing about this past lockdown is that the asshole Warden decreed that he wanted less contact between inmates, so the orderlies were out less, etc., and the COs mainly brought the food cards to the units and had more contact with us.
Hey, Dumbass, it's the COs who are bringing COVID in here, so how does it make any sense for us to have more contact with staff instead of less?
He's such a stupid dick.
I bet anything that his sadistic asshole will keep us on some type of lockdown as long as he can get away with it even after we get the vaccine.

OK... to update you on what's happened in the past week, we were actually let out of our cells the following day, but not until 9:30A. It was my tier's week to be out in the morning + the bottom tier was out in the afternoon.
As I've mentioned before, the morning shift kinda sucks, but at least we weren't locked down - Thank goodness! Also, they got rid of that pointless IOA "count" and brought back the IOA + Ip "census." The census is where you only have to stand by your cell (or in) + it takes a lot less time.
Oh! I almost forgot: we were also let out for 1 1/2 hour in the evenings. Usually the "morning" tier from 6:30-8p. Being out at night again was great.
things were going fine until the following Sat. At some point during the night I thought I heard something being slipped under the door. It was the enclosed memo from the BOP Director. Because of the previous riot in D.C + all the possible protests and/or violence regarding the inauguration of Pres. Biden, we were being locked down again.
Are you fucking kidding me!!!??
We were out only four freakin' days before being put back on another full lockdown! And all because some idiots out there want to riot because Trump wants to be "President for Life!"
NO ONE in prison is going to riot (or whatever) over Trump losing the election- even those who support Trump. This is yet another excuse to keep us locked in our cells.

Hey y'all... another Sunday sitting in bed as "Can Wash" by Rose Royce played on C3PO.
During the "riot" lockdown, they didn't even have the normal Food Service workers go to work from upstairs. They went back to feeding us box meals for breakfast and lunch.
As usual, we were back to shower three times a week. As last Monday was a holiday, (it was MLK Day, for those of you outside the U.S.), we didn't get a shower from Friday to Tuesday. I really hate that.
Thankfully, nothing happened to mar the inauguration. I didn't watch most of it, but I did watch both Harris and Biden get sworn in, which was the first time I'd seen a swearing in ceremony.
There were rumors that we would be locked down for 45 days or more! I was told this was on the internet, but was unable to verify this. But... when we didn't get out on Thursday, I was starting to wonder what the hell was going on.
Fortunately, though, on Friday they let us out again and we were back to the schedule from before the "riot" lockdown. The only change they made was that whereas they brought the meals to the unit during those four days, we are now back to walking to the entrance of the Chow Hall and picking up our meals and bringing them back. And yes, we are required to put on our uniforms during the week. Stupid.
They have also started having guys walk to Medical for pill line now instead of bringing it to the unit. That's a good sign that things will continue to open up.
So far we have not received the vaccine and there is not definite word on when that will happen.
Oh, although normally this past Friday would have been the week my tier would be out in the afternoon, they had us on the "morning" rotation. This was very fortunate because starting today we are on the "afternoon" rotation, so hopefully we'll get a whole week out in the afternoon.
It also appears that at least one unit, C-South, across from us, is still on lockdown 'cause they are bringing food carts to that unit. I can only assume that they have a COVID case there or at least suspect one.
We have been back and forth so much on different stages of lockdown and various phases of quarantine that I can't keep track of it anymore. I'd have to go back and read all my entries online here to figure it out. This crap has been insane.
This is our 10th month on quarantine and there is no sign of it ending anytime soon.
Until next time, I wish you...
Love and Blessings,
(illegible signature)