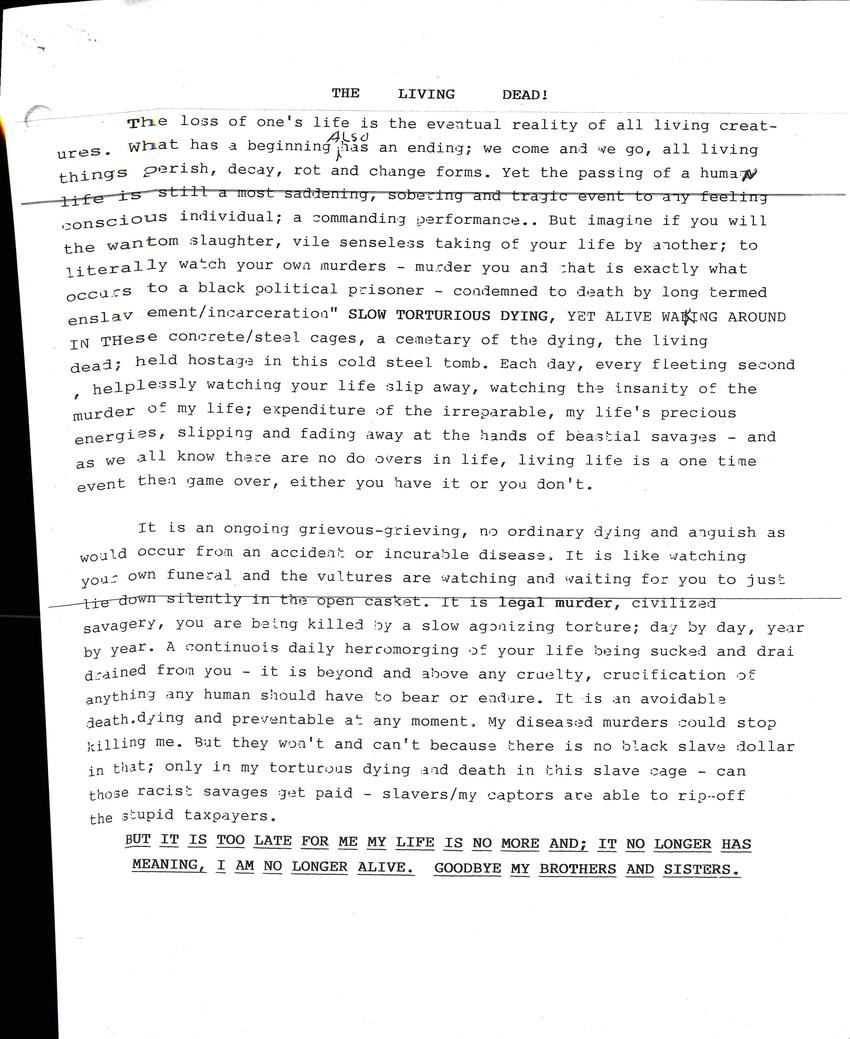 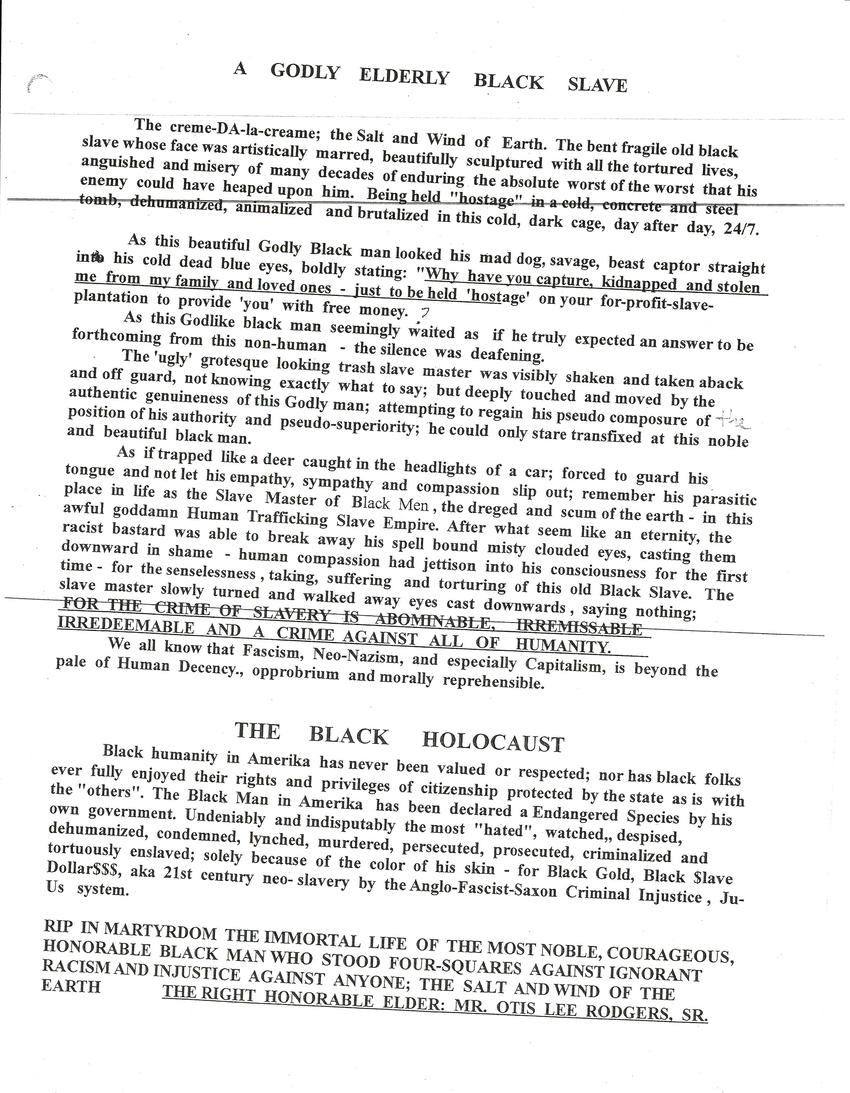 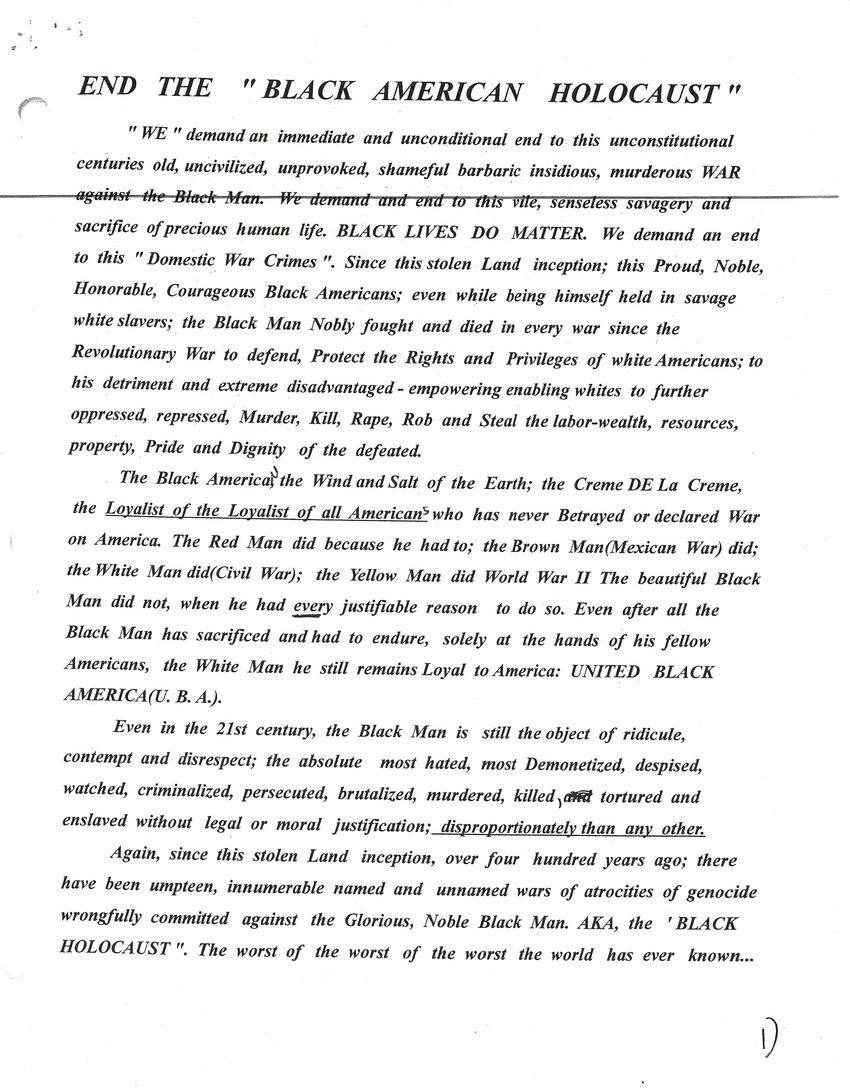 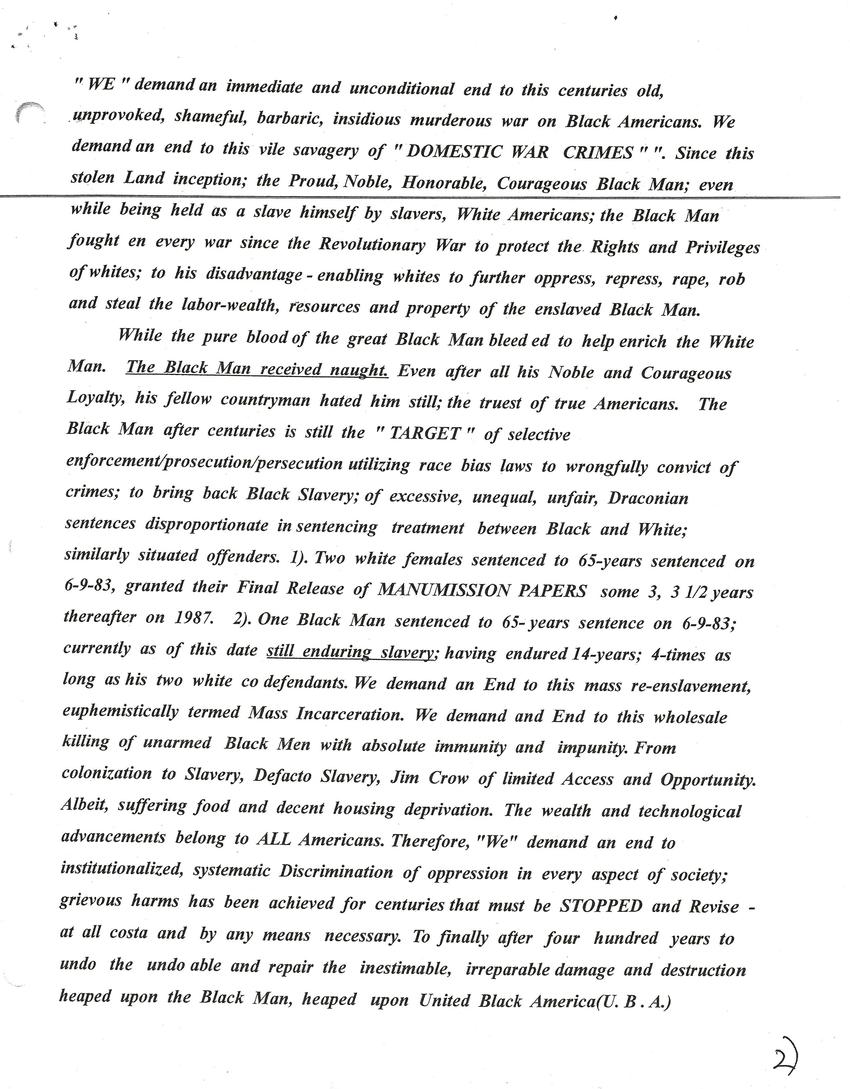 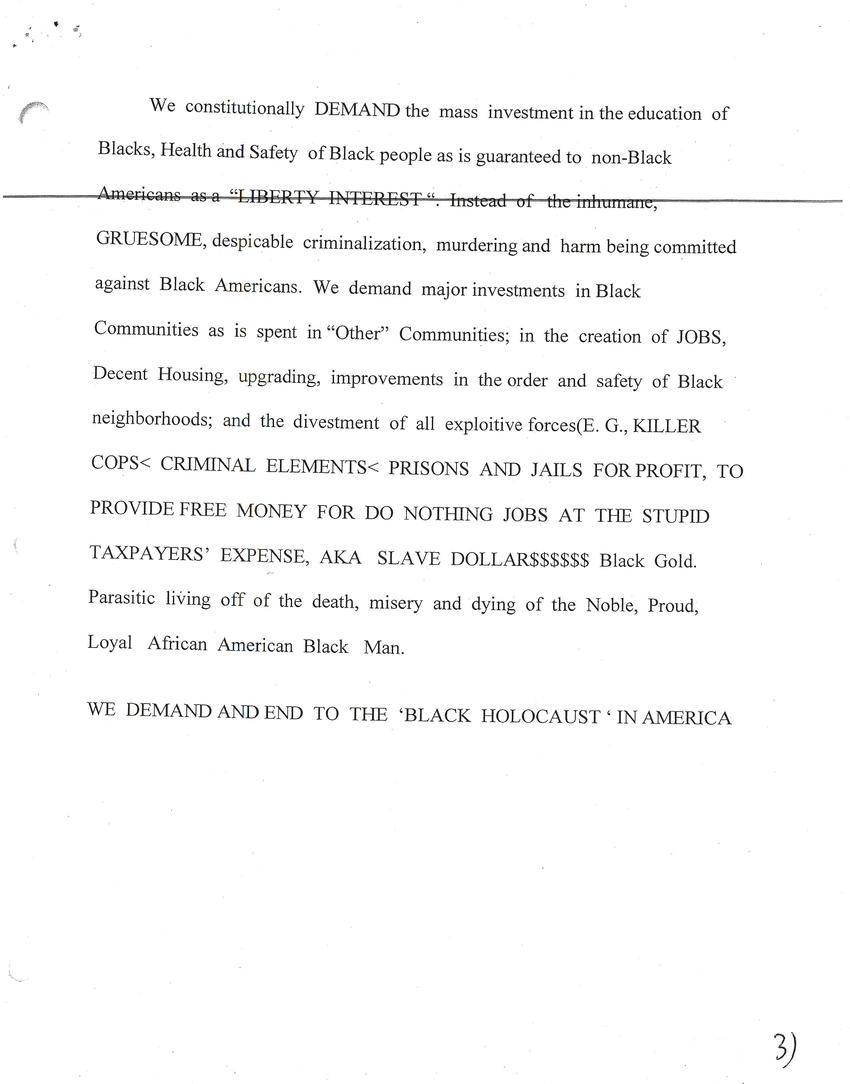 The loss of one's life is the eventual reality of all living creatures. What has a beginning also has an ending; we come and we go, all living things perish, decay, rot and change forms. Yet the passing of a human life is still a most saddening, sobering and tragic event to any feeling conscious individual; a commanding performance.. But imagine if you will the wantom slaughter, vile senseless taking of your life by another; to literally watch your own murders - murder you and that is exactly what occurs to a black political prisoner - condemned to death by long termed enslavement/incarceration" SLOW TORTURIOUS [TORTUROUS] DYING, YET ALIVE WALKING AROUND IN THese concrete/steel cages, a cemetary [cemetery] of the dying, the living dead; held hostage in this cold steel tomb. Each day, every fleeting second, helplessly watching your life slip away, watching the insanity of the murder of my life; expenditure of the irreparable, my life's precious energies, slipping and fading away at the hands of beastial savages - and as we all know there are no do overs in life, living life is a one time event then game over, either you have it or you don't.

It is an ongoing grievous-grieving, no ordinary dying and anguish as would occur from an accident or incurable disease. It is like watching your own funeral and the vultures are watching and waiting for you to just lie down silently in the open casket. It is legal murder, civilized savagery, you are being killed by a slow agonizing torture; day by day, year by year. A continuois [continuous] daily herromorging[hemorrhaging] of your life being sucked and drai drained from you - it is beyond and above any cruelty, crucification of anything any human should have to bear or endure. It is an avoidable death. Dying and preventable at any moment. My diseased murders could stop killing me. But they won't and can't because there is no black slave dollar in that; only in my torturous [tortuous] dying and death in this slave cage - can those racist savages get paid - slavers/my captors are able to rip-off the stupid taxpayers.

BUT IT IS TOO LATE FOR ME MY LIFE IS NO MORE AND; IT NO LONGER HAS MEANING, I AM NO LONGER ALIVE. GOODBYE MY BROTHERS AND SISTERS.

The creme-DA-la-creame; the Salt and Wind of Earth. The bent fragile old black slave whose face was artistically marred, beautifully sculpted with all the tortured lives, anguished and misery of many decades of enduring the absolute worst of the worst that his enemy could have heaped upon him. Being held "hostage" in a cold, concrete and steel tomb, dehumanized, animalized, and brutalized in this cold, dark cage, day after day, 24/7.

As this beautiful Godly Black man looked his mad dog, savage, beast captor straight into his cold dead blue eyes, boldly stating: "Why have you capture, kidnapped and stolen me from my family and loved ones - just to be held 'hostage' on your for-profit-slave-plantation to provide 'you' with free money.
As this Godlike black man seemingly waited as if he truly expected an answer to be forthcoming from this non-human - the silence was deafening.
The 'ugly' grotesque looking trash slave master was visibly shaken and taken aback and off guard, not knowing exactly what to say; but deeply touched and moved by the authentic genuineness of this Godly man; attempting to regain his pseudo composure of the position of his authority and pseudo-superiority; he could only stare transfixed at this noble and beautiful black man.
As if trapped like a deer caught in the headlights of a car; forced to guard his tongue and not let his empathy, sympathy, and compassion slip out; remember his parasitic place in life as the Slave Master of Black Men, the dreged and scum of the earth - in this awful goddamn Human Trafficking Slave Empire. After what seem like an eternity, the racist bastard was able to break away his spell bound misty clouded eyes, casting them downward in shame - human compassion had jettison into his consciousness for the first slave master slowly turned and walked away eyes cast downwards, saying nothing; FOR THE CRIME OF SLAVERY IS ADOMINABLE, IRREMISSABLE IRREDEEMABLE AND A CRIME AGAINST ALL OF HUMANITY. We all know tha Fascism, Neo-Nazism, and especially Capitalism, is beyond the pale of Human Decency., opprobrium and morally reprehensible.

THE BLACK HOLOCAUST
Black humanity in Amerika has never been valued or respected; nor has black folks ever fully enjoyed their rights and privileges of citizenship protected by the state as is with the "others". The Black Man in Amerika has been declared a Endangered Species by his own government. Undeniably and indisputably the most "hated" watched,, despised, dehumanized, condemned, lynched, murdered, persecuted, prosecuted, criminalized and tortuously enslaved; solely because of the color of his skin - for Black Gold, Black $lave Dollar$$$, aka 21st century neo- slavery by the Anglo-Fascist-Saxon Criminal Injustice, Ju-Us system.

RIP IN MARTYRDOM THE IMMORTAL LIFE OF THE MOST NOBLE, COURAGEOUS, HONORABLE BLACK MAN WHO STOOD AGAINST ANYONE; THE SALT AND WIND OF THE EARTH THE RIGHT HONORABLE ELDER: MR. OTIS LEE RODGERS, SR.

END THE "BLACK AMERICAN HOLOCAUST"
" WE " demand an immediate and unconditional end to this unconstitutional centuries old, uncivilized, unprovoked, shameful barbaric insidious, murderous WAR against the Black Man. We demand and end to this vile, senseless savagery and sacrifice of precious human life. BLACK LIVES DO MATTER. We demand an end to this " Domestic War Crimes ". Since this stolen Land inception; this Proud, Noble, Honorable, Courageous Black American; even while being himself held in savage white slavers; the Black Man Nobly fought and died in every war since the Revolutionary War to defend, Protect the Rights and Privileges of white American; to his detriment and extreme disadvantaged - empowering enabling whites to further oppressed, repressed, Murder, Kill, Rape, Rob and Steal the labor-wealth, resources, property, Pride and Dignity of the defeated.
The Black Americas, the Wind and Salt of the Earth, the Creme DE La Creme, the Loyalist of the Loyalist of all Americans who has never betrayed or declared War on America. The Red Man did because he had to; the Brown Man(Mexican War) did; the White Man did(Civil War); the Yellow Man did World War II The beautiful Black Man did not, when he had every justifiable reason to do so. Even after all the Black Man has sacrificed and had to endure, soley at the hands of his fellow Americans, the White Man he still remains Loyal to America: UNITED BLACK AMERICA(U. B. A.).
Even in the 21st century, the Black Man is still the object of ridicule, contempt, and disrespect; the absolute most hated, most Demonetized, despised, watched, criminalized, persecuted, brutalized, murdered, killed, tortured and enslaved without legal or moral justification; disproportionately than any other.
Again, since this stolen Land inception, over four hundred years ago; there have been umpteen, innumerable named and unnamed wars of atrocities of genocide wrongfully committed against the Glorious, Noble Black Man. AKA, the ' BLACK HOLOCAUST '. The worst of the worst of the worst of the world has ever known...
" WE " demand an immediate and unconditional end to this centuries old, unprovoked, shameful, barbaric, insidious murderous war on Black Americans. We demand an end to this vile savagery of " DOMESTIC WAR CRIMES " ". Since this stolen Land inception; the Proud, Noble, Honorable, Courageous Black Man; even while being held as a slave himself by slavers, White Americans; the Black Man fought en every war since the Revolutionary War to protect the Rights and Privileges of whites; to his disadvantage - enabling whites to further oppress, repress, rape, rob and steal the labor-wealth, resources and property of the enslaved Black Man.
While the pure blood of the great Black Man bleed ed to help enrich the White Man. The Black Man received naught. Even after all his Noble and Courageous Loyalty, his felloe countryman hated him still; the truest of true Americans. The Black Man after centuries is still the " TARGET " of selective enforcement/prosecution/persecution utilizing race bias laws to wrongfully convict of cries; to bring back Black Slavery; of excessive, unequal, unfair, Draconian sentences disproportionate in sentencing treatment between Black and White; similarly situated offenders. 1). Two white females sentenced to 65-years sentenced on 6-9-83, granted their Final Release of MANUMISSION PAPERS some 3, 31/2 years thereafter on 1987. 2). One Black Man sentenced to 65-years sentence on 6-9-83; currently as of this date still enduring slavery; having endured 14-years; 4-times as long as his two white co defendants. We demand an End to this wholesale killing of unarmed Black Men with absolute immunity and impunity. From colonization to Slavery, Defacto Slavery, Jim Crow of limited Access ond Opportunity. Albeit, suffering food and decent housing deprivation. The wealth and technological advancements belong to ALL Americans. Therefore, "We" demand an end to institutionalized, systematic Discrimination of oppression in every aspect of society; grievous harms has been achieved for centuries that must be STOPPED and Revise - at all costa and by any means necessary. To finally after four hundred years to undo the undo able and repair the inestimable, irreparable damage and destruction heaped upon the Black Man, heaped upon United Black America(U. B. A.)
We constitutionally DEMAND the mass investment in the education of Blacks, Health and Safety of Black people as in guaranteed to non-Black Americas as a "LIBERTY INTEREST ". Instead of the inhumane, GRUESOME, despicable criminalization, murdering and harm being committed against Black Americans. We demand major investments in Black Communities as is spent in "Other" Communities; in the creation of JOBS, Decent Housing, upgrading, improvements in the order and safety of Black neighborhoods; and the divestment of all exploitive forces(E.G., KILLER OPS< CRIMINAL ELEMENTS< PRISONS AND JAILS FOR PROFIT, TO PROVIDE FREE MONEY FOR DO NOTHING JOBS AT THE STUPID TAXPAYERS' EXPENSE, AKA SLAVE DOLLARS$$$$$$ Black Gold. Parasitic living off of the death, misery and dying of the Noble, Proud, Loyal African American Black Man.

WE DEMAND AN END TO THE 'BLACK HOLOCAUST' IN AMERICA

This is you niece Channelle. I want you to know that I love you so much and remember to always keep you head held high.

I love to read your writing. Keep it up.


To the moat smartest man I know...


Love you niece, Channelle
Did you finish you book. Can you finish it, and give it to mishawn so we can get it published...