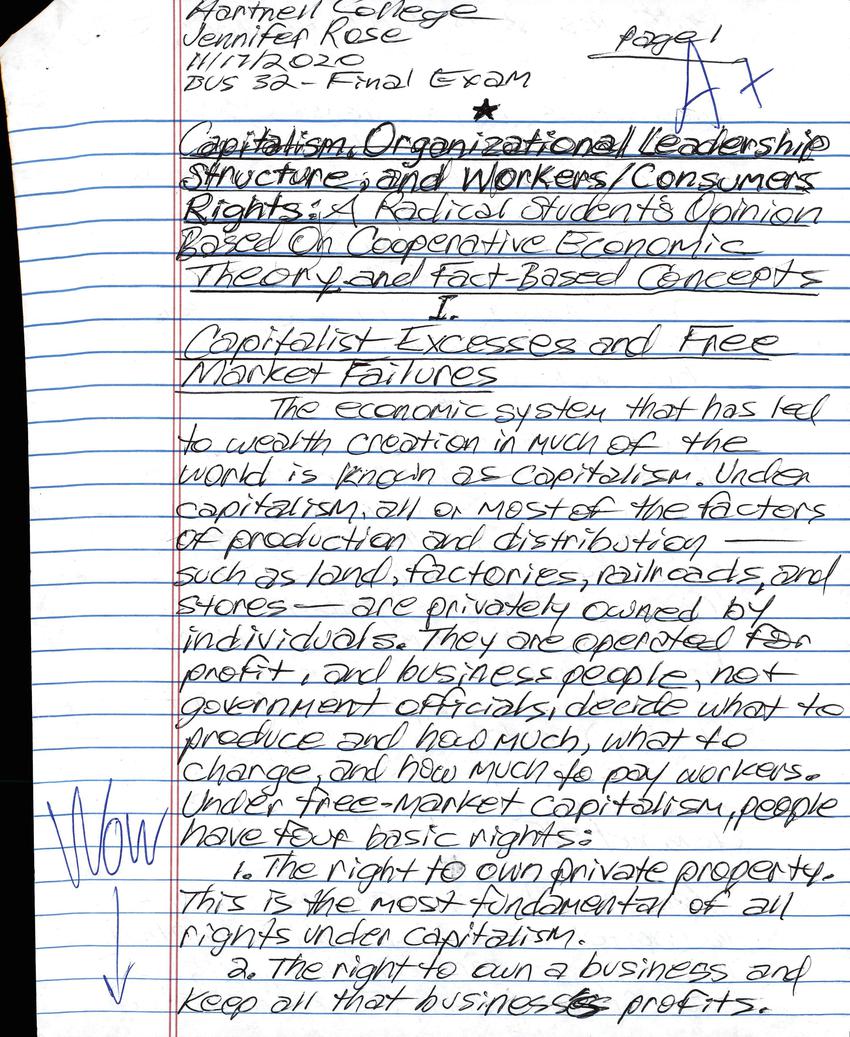 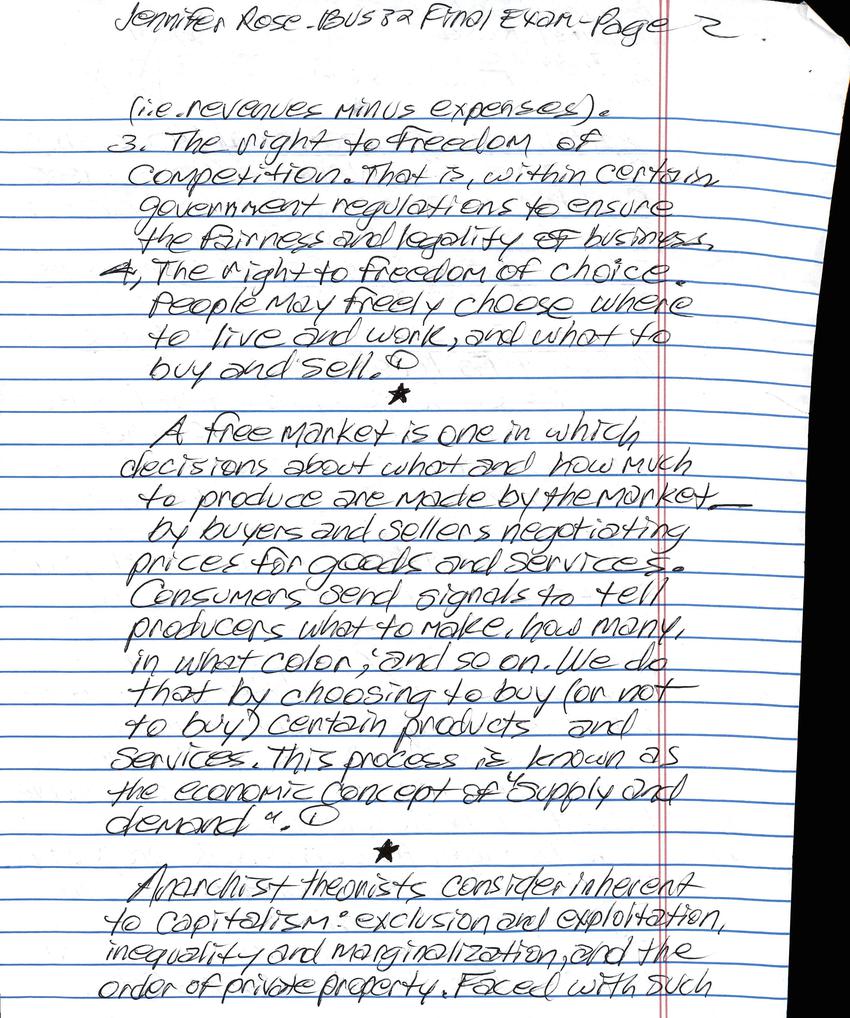 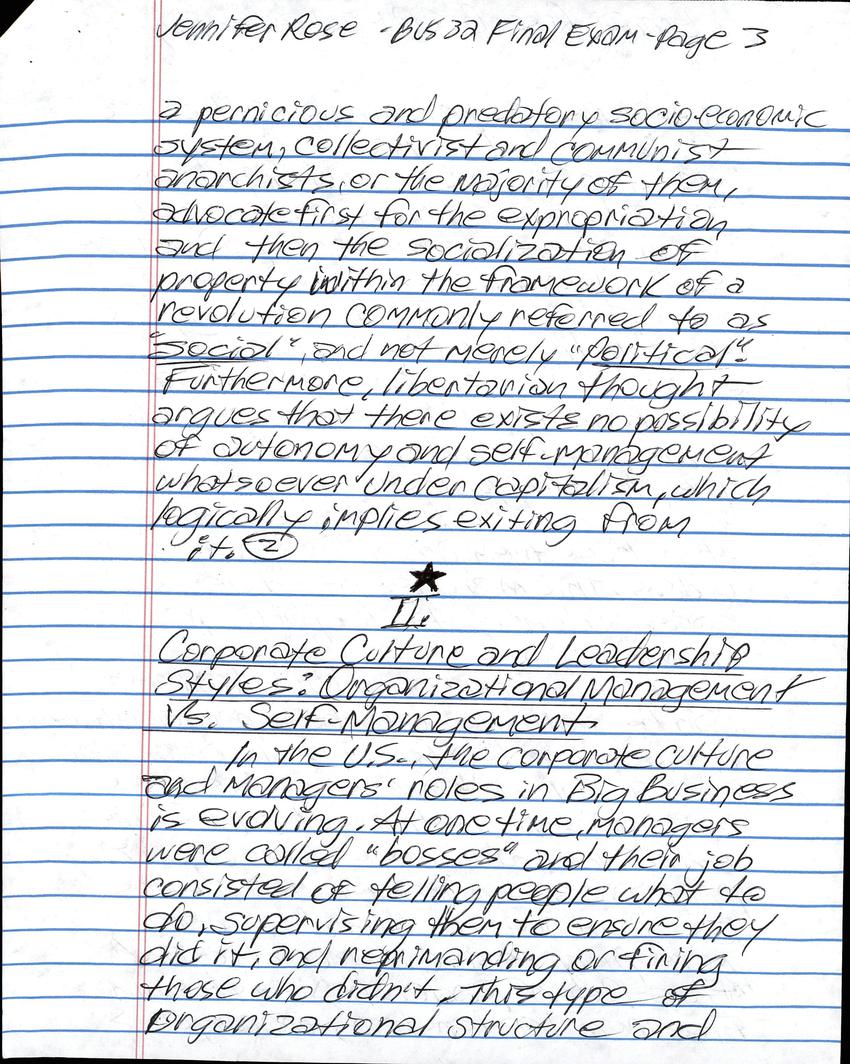 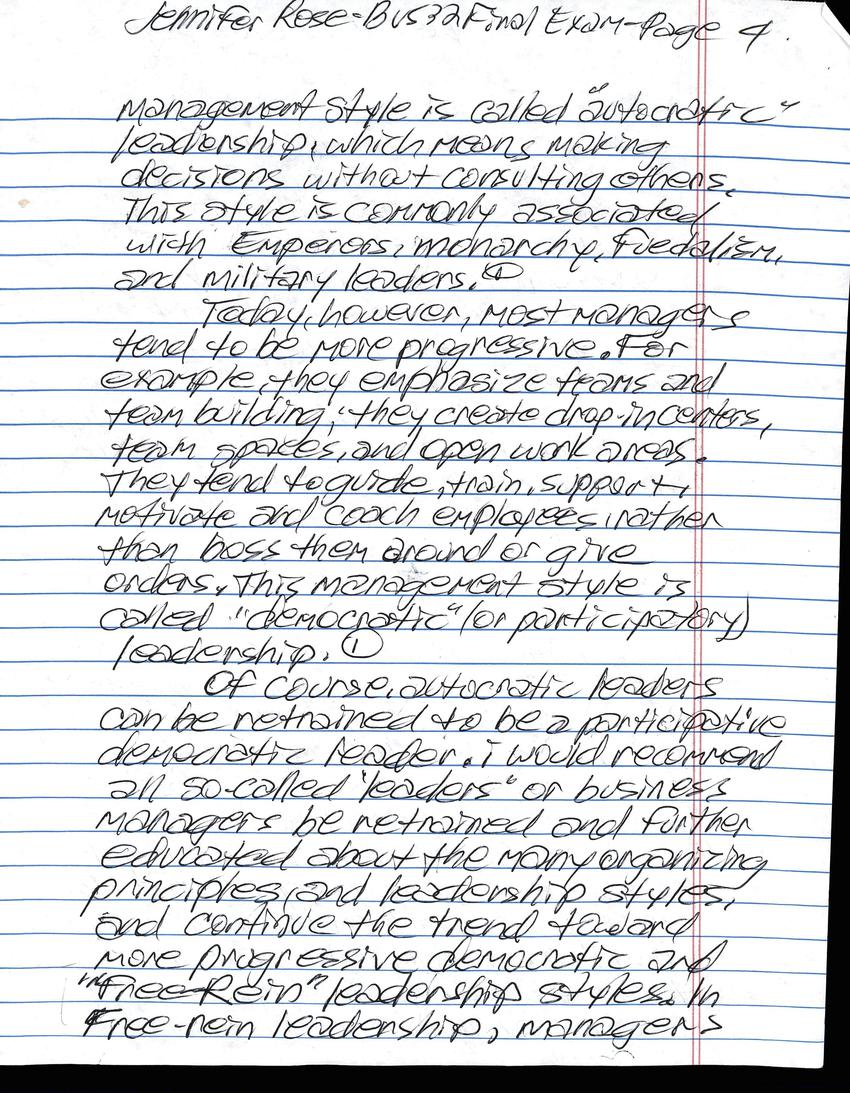 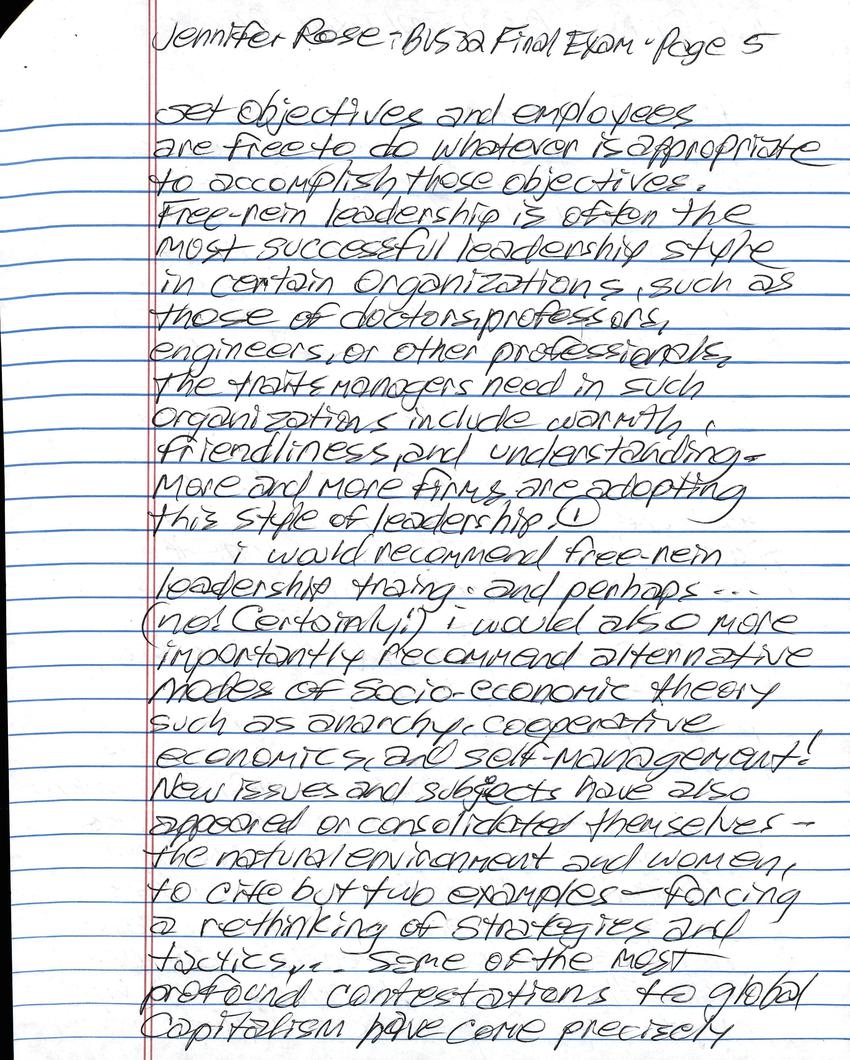 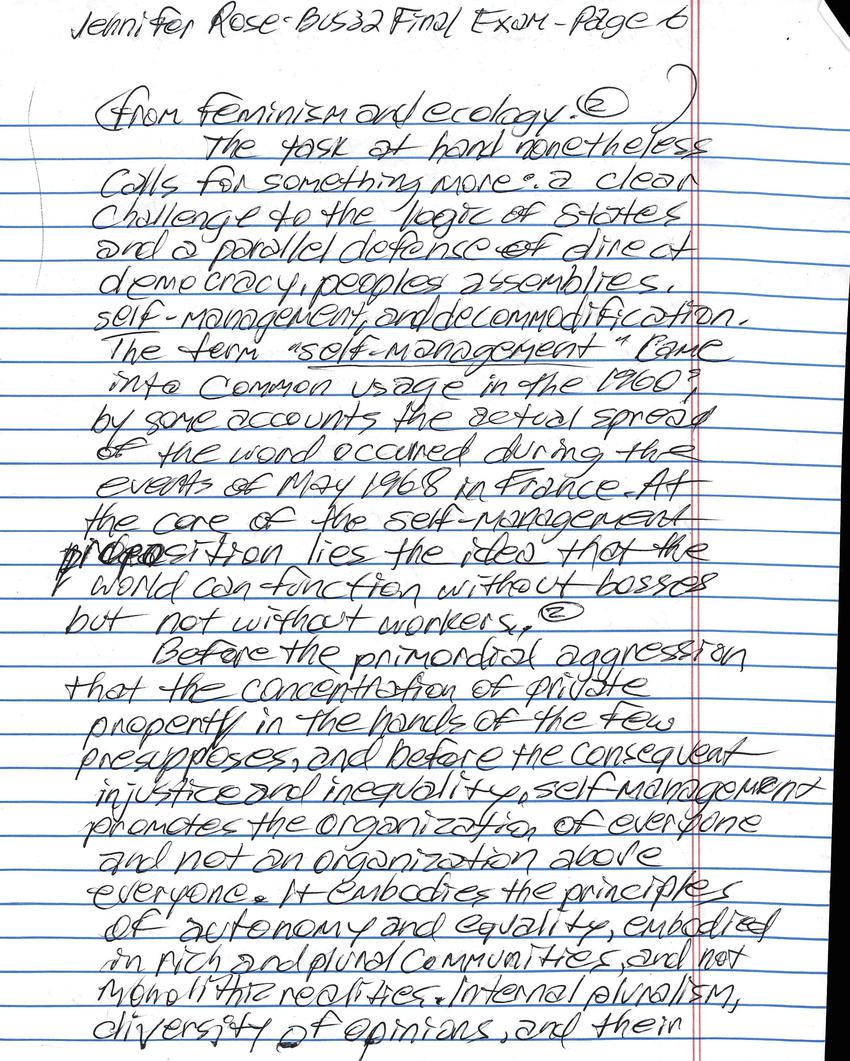 I. Capitalist Excesses and Free Market Failures
The economic system that has led to wealth creation in much of the world is known as capitalism. Under capitalism, all or most of the factors of production and distribution - such as land, factories, railroads, and stores - are privately owned by individuals. They are operated for profit, and business people, not government officials, decide what to produce and how much, what to charge, and how much to pay workers. Under free-market capitalism, people have four basic rights:
1. The right to won private property. This is the most fundamental of all rights under capitalism.
2. The right to won a business and keep all that businesses profits.
Jennifer Rose - Bus 32 Final Exam - Page 2
(i.e. revenues minus expenses).
3. The right to Freedom of competition. That is, within certain government regulations to ensure the fairness and legality of business.
4. The right to Freedom of choice. People may Freely choose where to live and work, and what to buy and sell.
(Star)
A free market is one in which decisions about what and how much to produce are made by the market by buyers and sellers negotiating prices for goods and services. Consumers send signals to sell producers what to make, how many, in what color; and so on. We do that by choosing to buy (or not to buy) certain products and services. This process is known as the economic concept of "Supply and demand".
(Star)
Anarchist theonists consider inherent to capitalism. exclusion and exploitation, inequality and marginalization, and the order of private property. Faced with such
Jennifer Rose - Bus 32 Final Exam - Page 3
a pernicious and predatory socioeconomic system, collectivist and communist anarchists, or the majority of them, advocate first for the expropriation and then the socialization of property within the framework of a revolution commonly referred to as "social", and not merely "political". Furthermore, liberation thought argues that there exists no possibility of autonomy and self-management whatsoever under capitalism, which logically implies existing from it. 2
(Star)

II.Corporate Culture and Leadership Styles: Organizational Management Vs. Self-Management
In the U.S. the corporate culture and manageers' roles in Big Business is [?]. At one time, managers were called "bosses" and their job consisted of telling people what to do, supervising them to ensure they did it, and reprimanding or fining those who didn't. this type of organizational structure and
Jennifer Rose - Bus 32 Final Exam - Page 4
management style is called "autocratic" leadership, which means making decisions without consulting others. This style is commonly associated with Emperors, monarchy, fuedalism, and military leaders.
Today, however, most managerstend to be more progressive. For example, they emphasize teams and team building, they create drop-in centers, team spaces, and open work areas. They tend to guide, train, support, motivate and coach employees rather than boss them around or give orders. This management style is called "democratic" or participatory leadership.
Of course, autocratic leaders can be retrained to be a participative democratic leader. I would recommend all so called "leaders" or business managers be retrained and further educated about the many organizing and continue the trend toward more progressive democratic and "Free-Rein" leadership styles. In Free-rein leadership, managers
Jennifer Rose: Bus 32 Final Exam - Page 5
set objectives and employees are free to do whatever is appropriate to accomplish those objectives. Free-rein leadership is often the most successful leadership style in certain organizations, such as those of doctors. professors, engineers, or other professionals. The traits managers need in such organizations include warmth, friendliness, and understanding. More and more firms are adopting this style of leadership (1)
I would recommend free-rein leadership training and perhaps... (no! Certainly!) I would also more importantly recommend alternative modes of socio-economic theory such as anarchy, cooperative economics, and self-management! New issues and subjects have also appeared or consolidated themselves - the natural environment and women, to cite but two examples - forcing a rethinking of strategies and tactics... same of the most profound contestations to global capitalism have come precisely
Jennifer Rose: Bus 32 Final Exam - Page 6
(from feminism and ecology. (2))
The task at hand nonetheless calls for something more; a clear challenge to the logic of states and a parallel defense of direct democracy, people's assemblies, self-management, and decommodificatios. The term "self-management" came into common usage in the 1960's, by some accounts the actual spread of the word occurred during the events of May 1968 in France. At the core of the self-management proposition lies the idea that the world can function without bosses but not without workers (2).
Before the primordial aggression that the concentration of private property in the hands of the few presupposes, and before the consequent injustice and inequality, self-management promotes the organization of everyone and not an organization above everyone. It embodies the principles of autonomy and equality, embodied in rich and plural communities, and not monolith realities. Internal pluralism, diversity of opinions, and their
Jennifer Rose: Bus 32 Final Exam Page 7
respect are crucial, as if the awareness that nothing good is gained if the resolution of problems is delegated to external authorities (2).

III. Employment, Maslow's Hierarchy of Needs, and Worker's Autonomy
The important of worker's job satisfaction cannot be overstates. It's crucial to the continued successes and sustainability of global capitalism as a socio-economic system, and its political consequential counterpart Neo-colonialist imperialism. The subsistence society is only held together by the political hegemony of imperialist countries like the U.S. and European Union, through the use of military aggression and occupation, and the international agencies which they control - a World Government - such as the United Nations, World Trade Organization, World Bank, International Monetary Fund, NATO. G8, etc. This is only possible by the use of military and police forces.
Jennifer Rose - Bus 32 Final Exams Page 8
My employment history only includes two jobs at Carl's Jr. restaurants, when I was a teenager. Other than that, I've been sentenced hard labor in the state prison for 25 years-to-life. Yes, involuntary servitude and slavery still exist in the U.S. under the Thirteenth Amendment of the U.S. Constitution, which prohibit slavery "... except as punishment for a crime...," though the U.S. prison slave trade is a direct violation of international law under the Universal Declaration of Human Rights, Article 4, which the U.S. is a signatory to. It states: "No one shall be held in slavery or servitude, slavery... shall be prohibited in all their forms." A fact that academics, business ethics, corporate social responsibility, consumers, courts, electoral candidates, government officials, human rights groups, mainstream media, and the world in general seems to ignore.
Psychologist Abraham Maslow believed that to understand
Jennifer Rose - Bus 32 Final Exam - Page 9