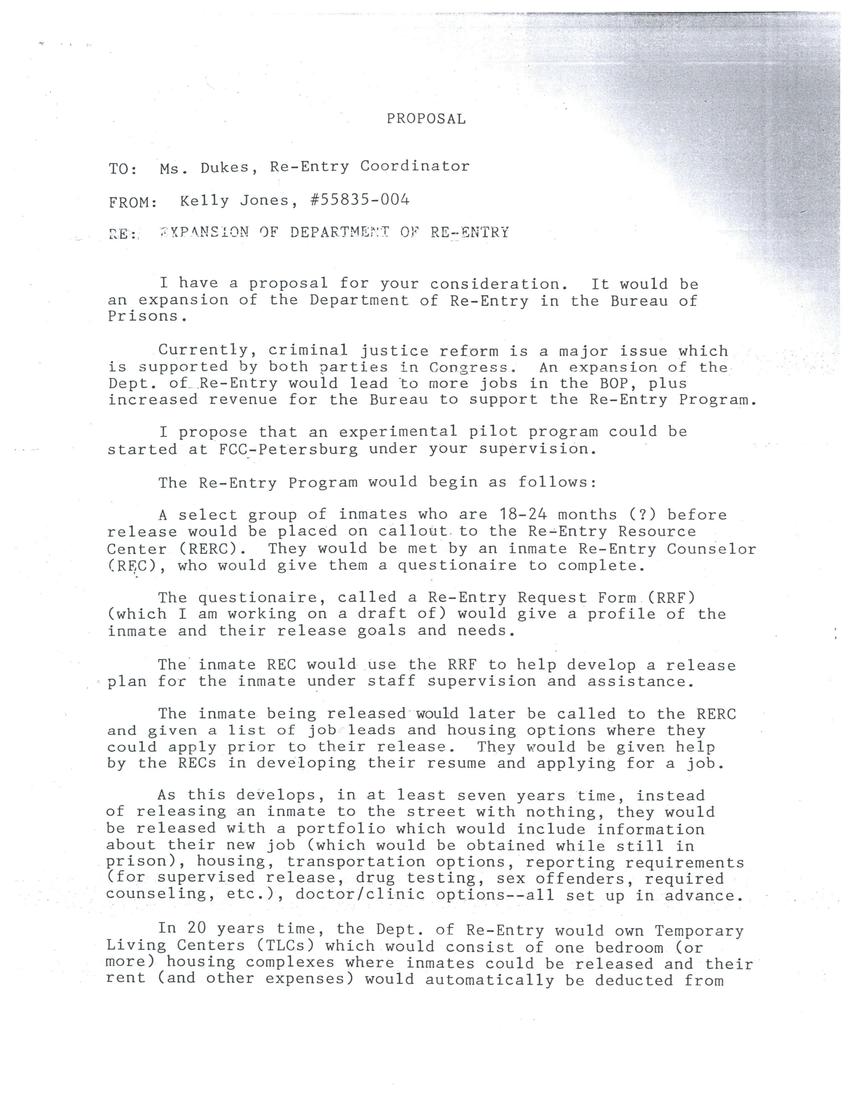 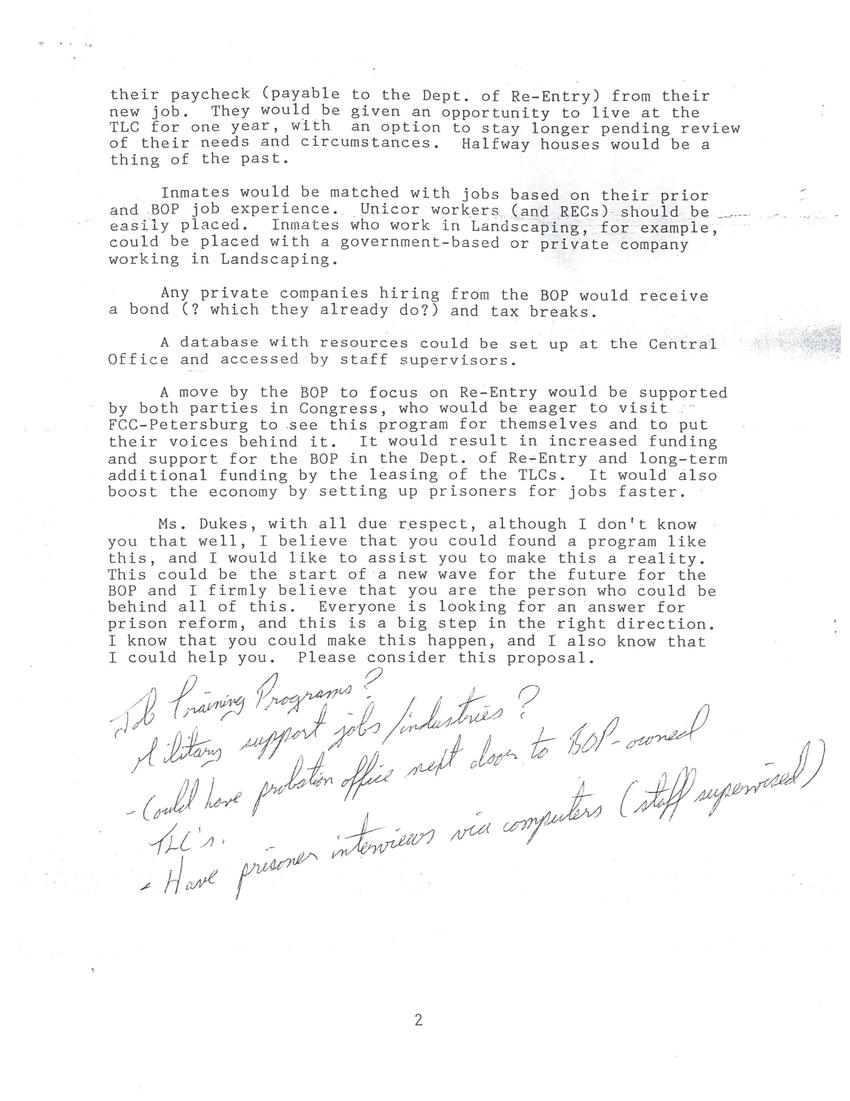 I have a proposal for your consideration. It would be an expansion of the Department of Re-Entry in the Bureau of Prisons.

Currently, criminal justice reform is a major issue which is supported by both parties in Congress. An expansion of the Dept. of Re-Entry would lead to more jobs in the BOP, plus increased revenue for the Bureau to support the Re-Entry Program.

I propose that an experimental pilot program could be started at FCC_Petersburg under your supervision.

The Re-Entry Program would begin as follows:

A select group of inmates who are 18-24 months (?) before release would be placed on callout to the Re-Entry Resource Center (RERC). They would b meet by an inmate Re-Entry Counselor (REC), who would give them a questionaire to complete.

The questionaire, called a Re-Entry Request form (RRF) (which I am working on a draft of) would give a profile of the inmate and their release goals and needs.

The inmate REC would use the RRF to help develop a release plan for the inmate under staff supervision and assistance.

The inmate being released would later be called to the RERC and given a list of job leads and housing options where they could apply prior to their release. They would be given help by the RECs in developing their resume and applying for a job.

As this develops, in at least seven years time, instead of releasing an inmate to the street with nothing, they would be released with a portfolio which would include information about their new job (which would be obtained while still in prison), housing, transportation options, reporting requirements (for supervised release, drug testing, sex offenders, required counseling, etc.), doctor/clinic options--all set up in advance.

In 20 years time, the Dept. of Re-Entry would own Temporary Living Centers (TLCs) which would consist of one bedroom (or more) housing complexes where inmates could be released and their rent (and other expenses) would automatically be deducted from their paycheck (payable to the Dept. of Re-Entry) from their new job. They would be given an opportunity to live at the TLC for one year, with an option to stay longer pending review of their needs and circumstances. Halfway houses would be a thing of the past.

Inmates would be matched with jobs based on their prior and BOP job experience. Unicor workers (and RECs) should be easily placed. Inmates who would in Landscaping, for example, could be placed with a government-based or private company working in Landscaping.

Any private companies hiring from the BOP would receive a bond (? which they already do?) and tax breaks.

A database with resources could be set up at the Central Office and accessed by staff supervisors.

A move by the BOP to focus on Re-Entry would be supported by both parties in Congress, who would be eager to visit FCC-Petersburg to see this program for themselves and to put their voices behind it. It would result in increased funding and support for the BOP in the Dept. of Re-Entry and long-term additional funding by the leasing of the TLCs. It would also boost the economy by setting up prisoners for jobs faster.

Ms. Dukes, with all due respect, although I don't know you that well, I believe that you could found a program like this, and I would like to assist you to make this a reality. This could be the start of a new wave for the future for the BOP and I firmly believe that you are the person who could be behind all of this. Everyone is looking for an answer for prison reform, and this is a big step in the right direction. I know that you could make this happen, and I also know that I could help you. Please consider this proposal.