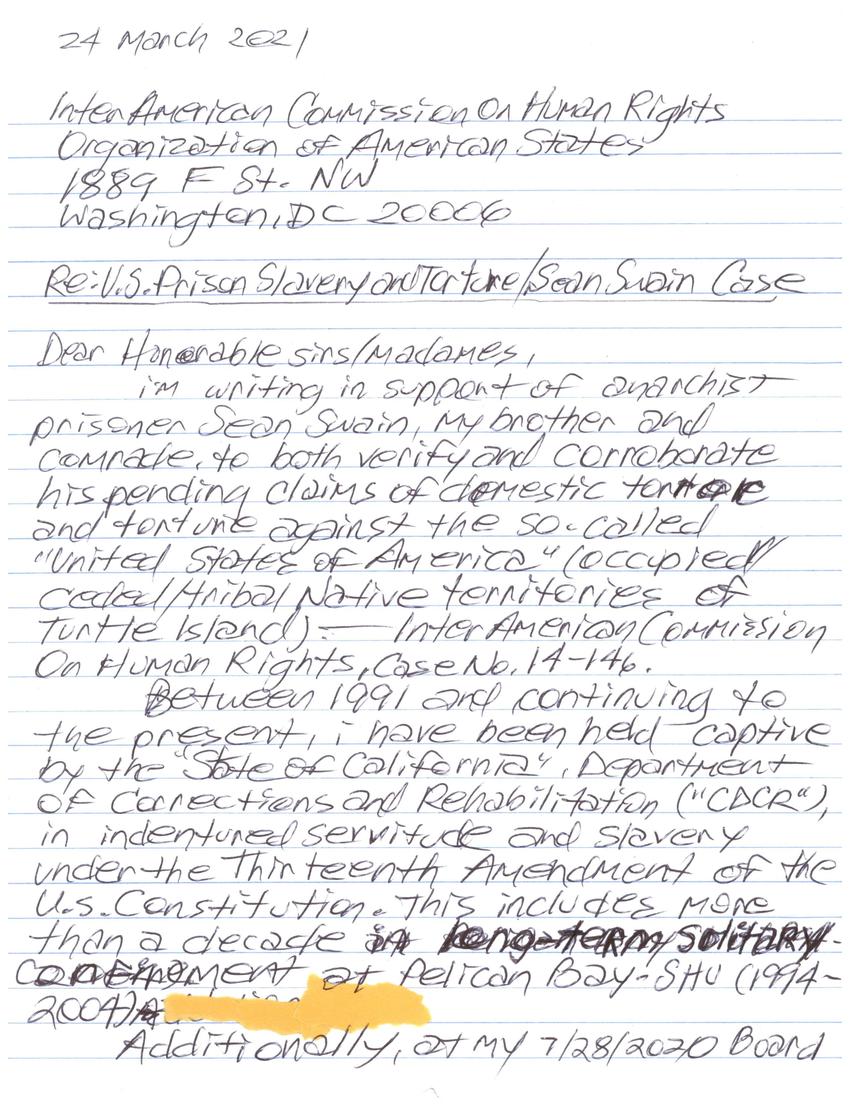 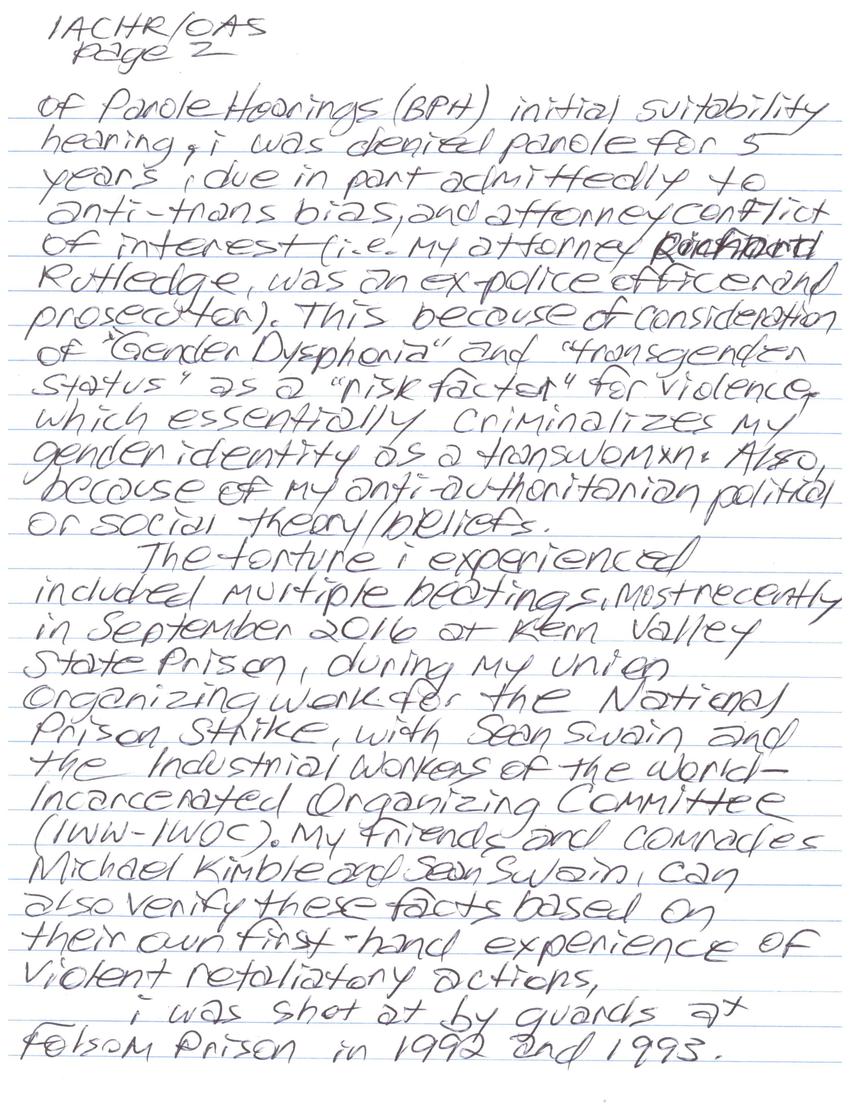 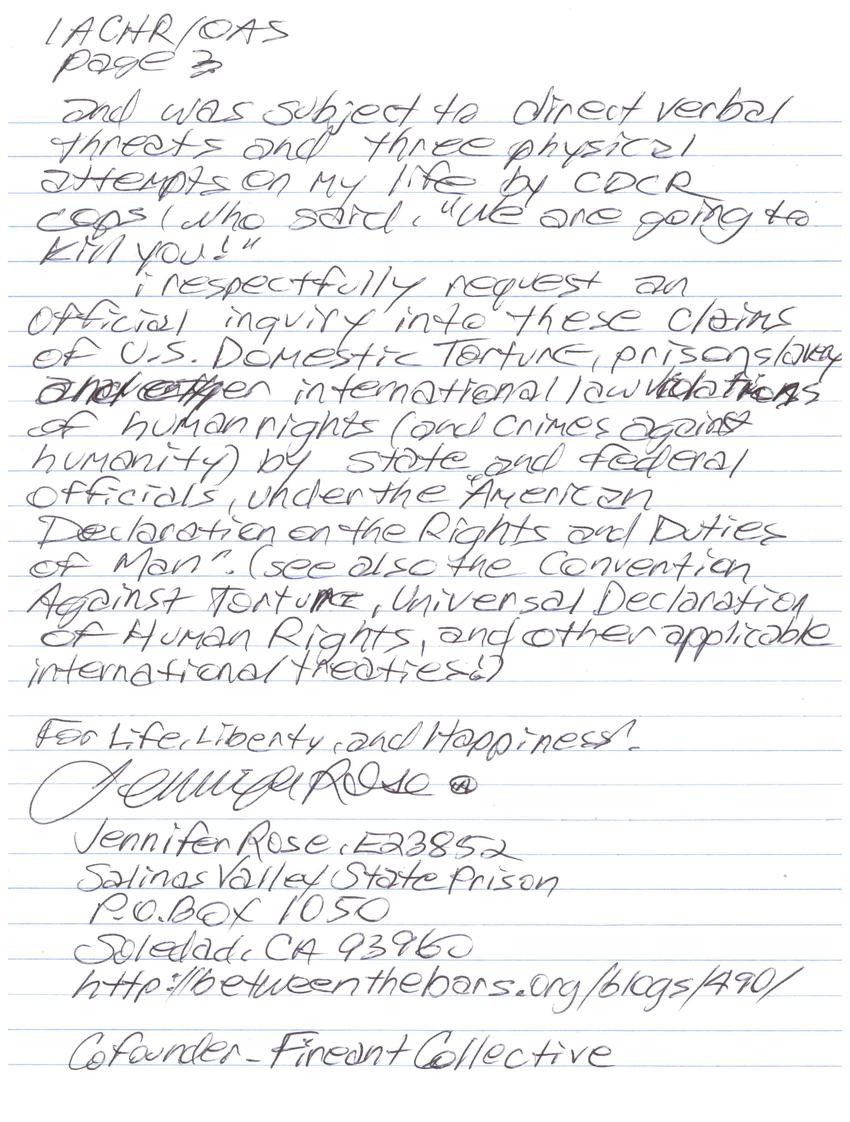 Dear Honorable Sirs/Madames,
I'm writing in support of anarchist prisoner Sean Swain, my brother and comrade, to both verify and corroborate his pending claims of domestic torture and against the so-called "United States of America" (occupied/ceded/tribal Native territories of Turtle Island)------ InterAmerican Commission on Human Rights, case No. 14-146.
Between 1991 and continuing to the present, I have been held captive by the "State of California" Department of Corrections and Rehabilitation ("CDCR"), in indentured servitude and slavery under the Thirteenth Amendment of the U.S. Constitution. This includes more than a decade in long-term/solitary confinement at Pelican Bay-Shu (1994-2004.)
Additionally, at my 7/28/2020 Board

IACHR/OAS
Page 2
of Parole Honoring (BPH) initial/suitability hearing, I was denied parole for 5 years, due in part admittedly to anti-trans bias, and attorney conflict of interest (i.e. my attorney/Richor/Routledge, was an ex-police officer and prosecutor.) This because of consideration of"Gender Dysphoria" and "transgender status" as a "risk factor" for violence which essentially criminalizes my gender identity as a transwoman. Also, because of my anti-authoritarian political or social theory/beliefs.
The torture I experienced included multiple beating, most recently in September 2016 at Kern Valley State Prison, during my union organizing work for the National Prison Strike, with Sean Swain and the Industrial workers of the world-Incarcerated Organizing Committee (IWW-IWOC.) My friends and comrades Michael Kimble and Swain can also verify these facts based on their own first-hand experience of violent retaliatory actions.
I was shot at by guards at Folsom Prison in 1992 and 1993
IACHR/OAS
page 3
and was subject to direct verbal threats and three physical attempts on my life by CDCR cops (who said, "We are going to kill you!"
I respectfully request an official inquiry into these claims of U.S. Domestic Torture, prison slavery and other international law violations of human rights (and crimes against humanity) by state and federal officials, under the "A,erican Declaration on the Rights and Duties of Man." (see also the convention Against torture, Universal Declaration of Human Rights, and other applicable international/treaties!)

For life, liberty, and happiness!