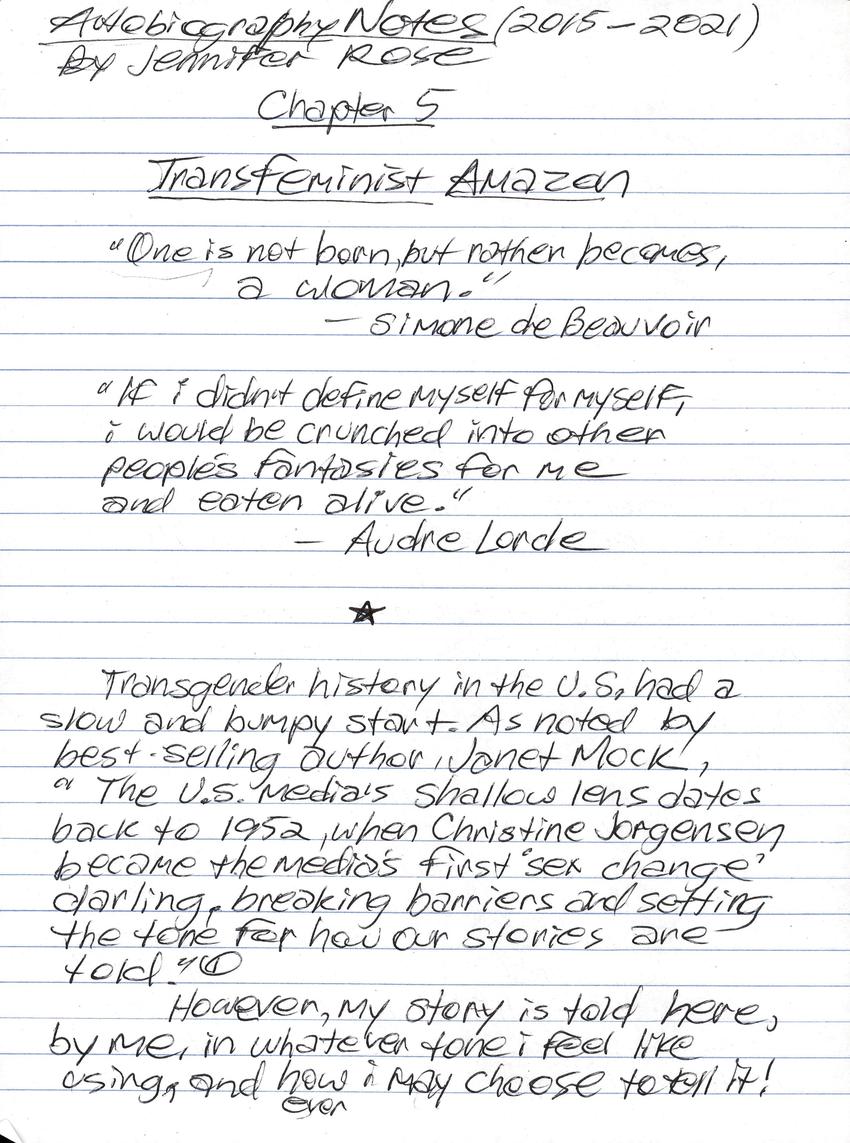 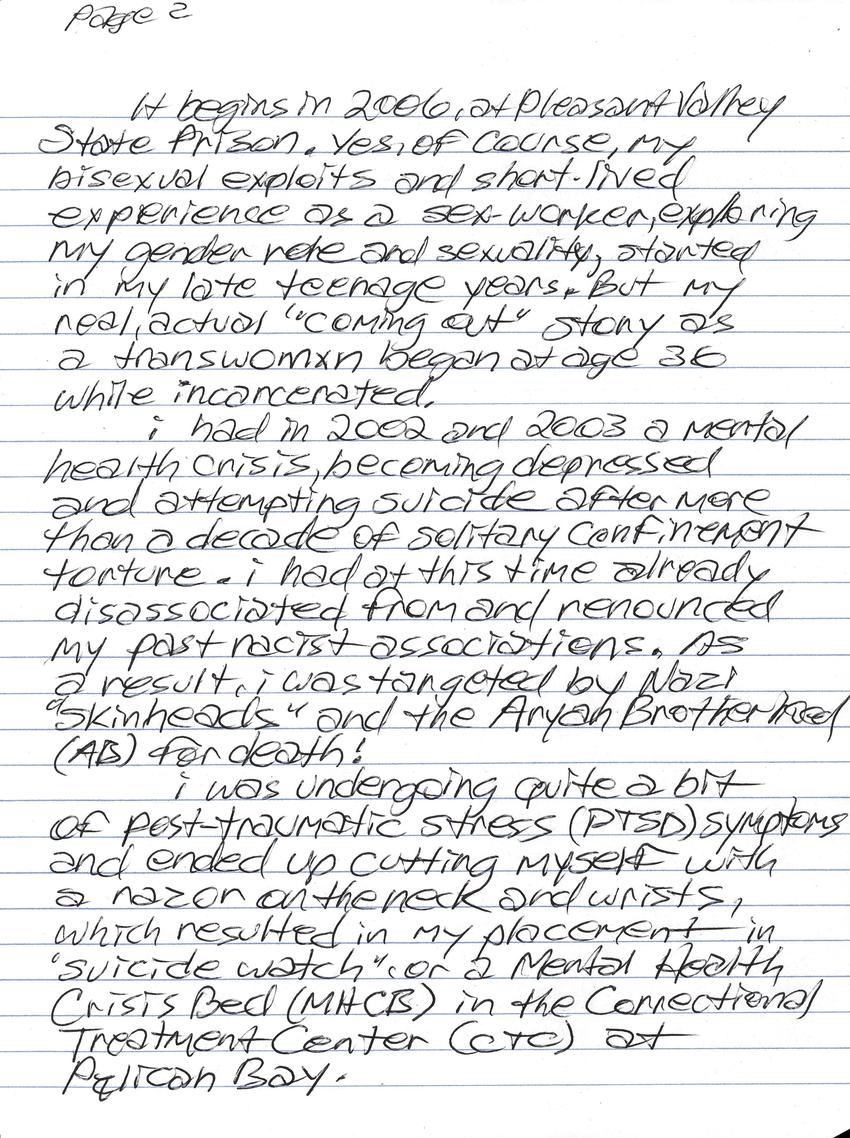 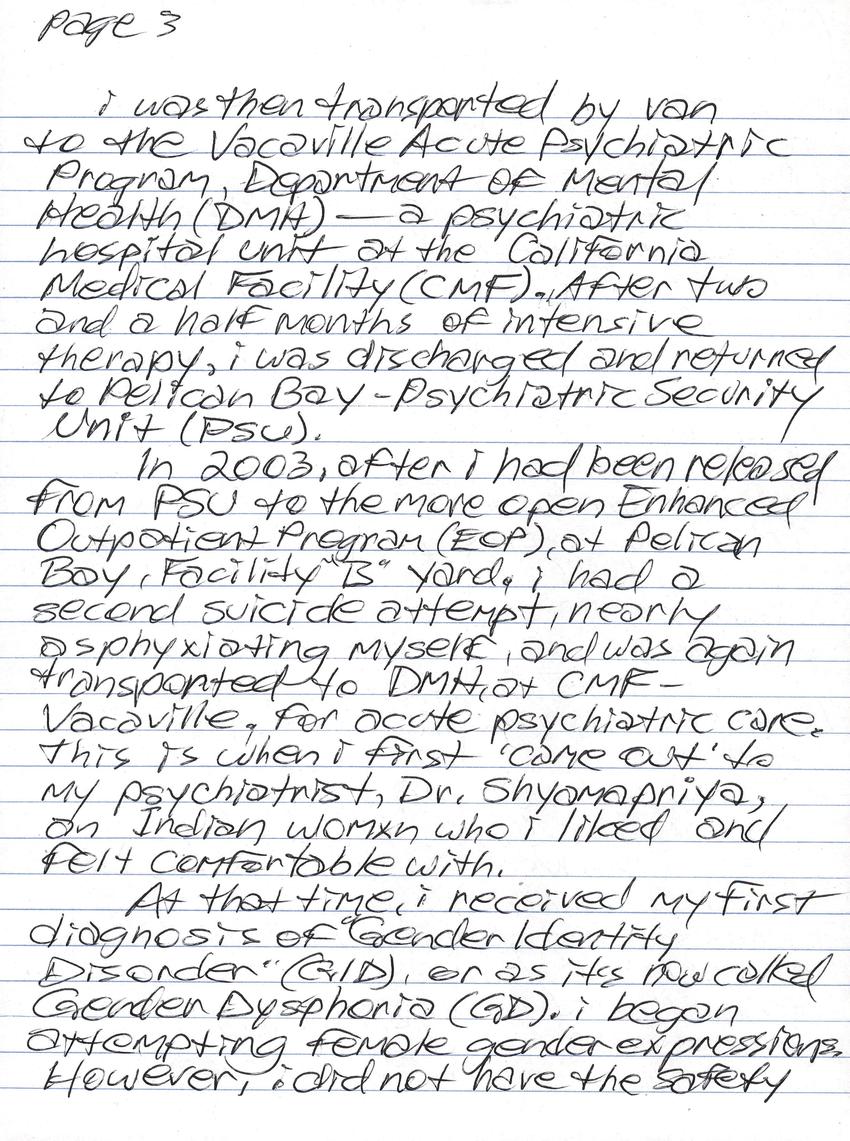 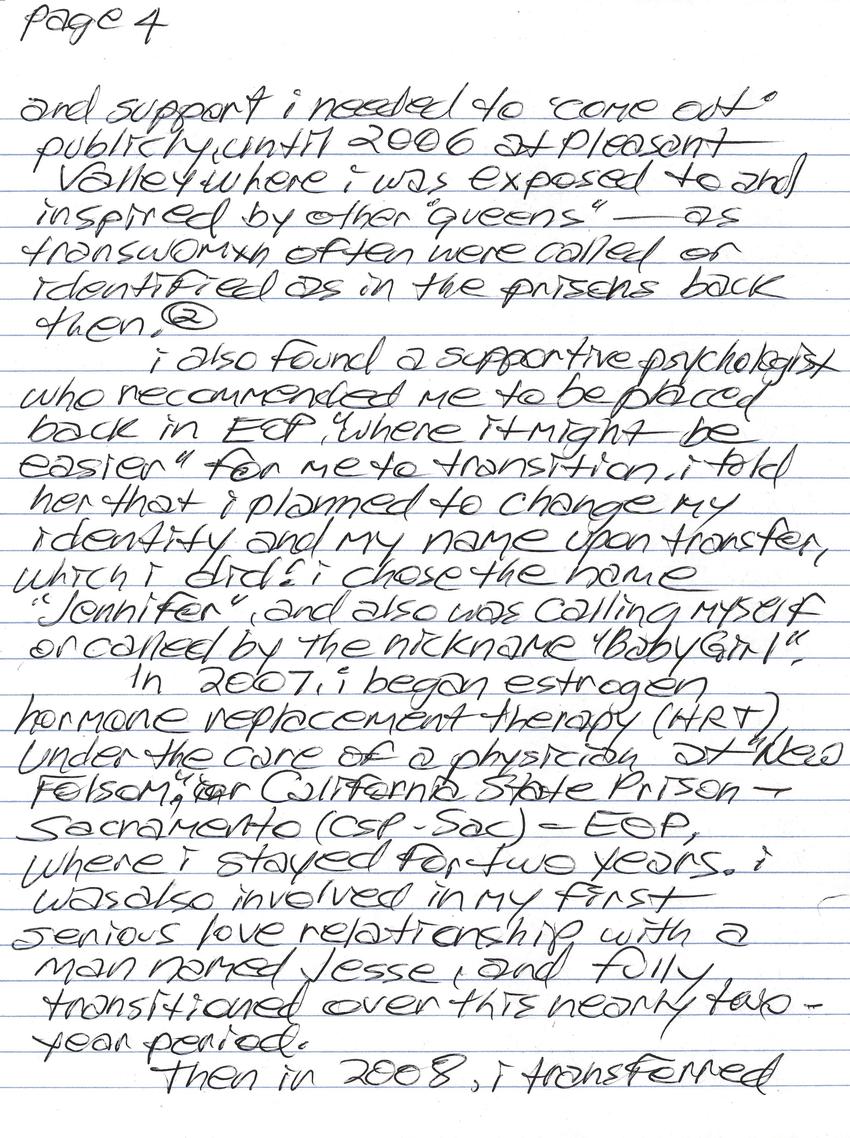 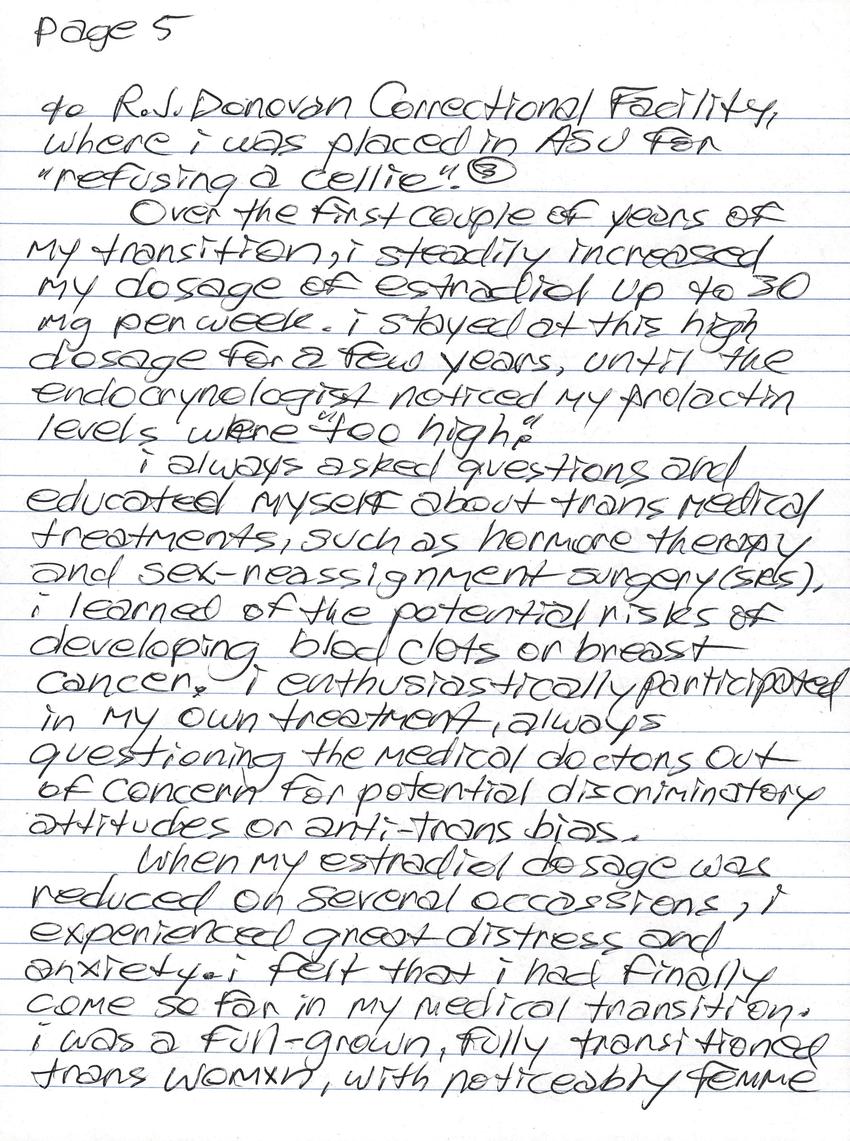 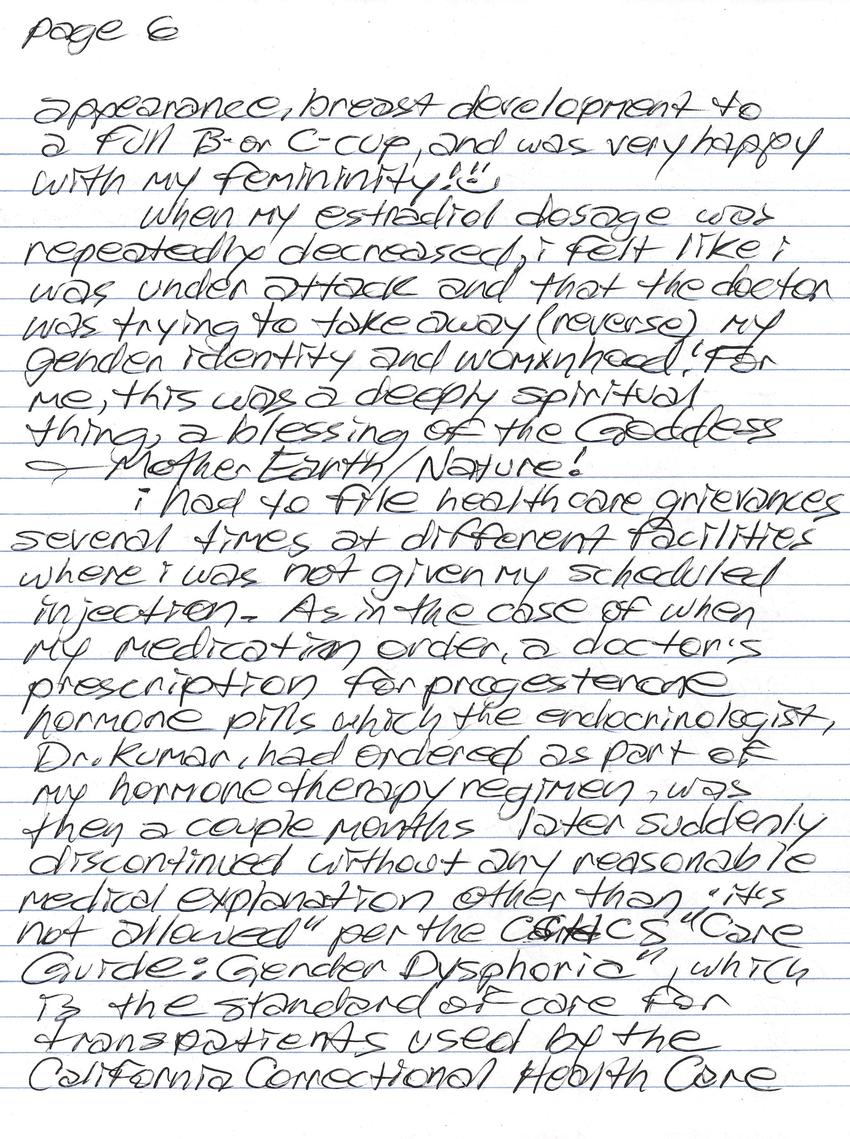 "One is not born, but rather becomes, a woman."
-Simone deBeovoir

"If i didn't define myself for myself, i would be crunched into other people's fantasies for me and eaten alive."
-Audre Lorde

Transgender history in the U.S. had a slow and bumpy start. As noted by best selling author, Janet Mock, "The U.S. Media's shallow lens dates back to 1952, when Christine Jorgensen became the media's first 'sex change' darling, breaking barriers and setting the tone for how our stories are told." (1)
However, my story is told here, by me, in whatever tone i feel like using, and however i may choose to tell it!

It begins in 2006, at Pleasant Valley State Prison. Yes, of course, my bisexual exploits ad short-lives experience as a sex-worker, exploring my gender role and sexuality, started in my late teenage years. But my real, actual "coming out" story as a transwoman began at age 36 while incarcerated.
i had in 2002 and 2003 a mental health crisis, becoming depressed and attempting suicide after more than a decade of solitary confinement torture. i had at this time already disassociated from and renounced my past racist associations. As a result, i was tangeted by Nazi "skinheads" and the Aryah Brotherhead (AB) for death!
i was undergoing quite a bit of post-traumatic stress (PTSD) symptoms and ended up cutting myself with a razor on the neck and wrists, which resulted in my placemet in 'suicide watch' or a Mental Health Crisis Bed (MHCB) in the Correctional Treatment Center (CTC) at Pelican Bay.

i was then transported by van to the Vacaville Acute Psychiatric Program, Department of Mental Health (DMH) - a psychiatric hospital unit at the California Medical Facility (CMF). After two and a half months of intensive therapy, i was discharged and returned to Pelican Bay - Psychiatric Security Unit )PSU).
In 2003, after i had been released from PSU to the more open Enhanced Outpatient Program (EOP), at Pelican Bay, Facility 'B" yard. i had a second suicide attempt, nearly asphyxiated myself, and was again transported to DMH, at CMF - Vacaville. for acute psychiatric care. this is when i first 'came out' to my psychiatrist , Dr. Shyomapriya, an Indian woman who liked and felt comfortable with.
At that time, i received my First diagnosis of "Gender Identity Disorder" (GID), or as it's now called Gender Dysphoria (GD). i began attempting female gender expressions. However, i did not have the safety

and support i needed to 'come out' publicly, until 2006 at Pleasant Vally where i was exposed to and inspired by other "queens" - as transwoman often were called or identified as in the prisons back then. (2)
i also found a supportive psychologist who recommended me to be placed back in EEP, "where it might be easier" for me to transistion. i told her that i planned to change my identity and my name upon transfer, which i did! i chose the name "Jennifer", and also was calling myself or called by the nickname "Baby Girl".
In 2007, i began estrogen hormone replacement therapy (HRT), under the care of a physician t "New Folsom" or California State Prison - Sacramento (CSP-Sac) - EOP, where I stayed for two years. i was also involved with my first serious love relationship with a man named Jesse, and fully transitioned over this nearly two-year period.
Then in 2008, i transferred

to R.J. Donovan Correctional Facility, where i was placed in ASU for "refusing a cellie". (3)
Over the first couple of years of my transition, i steadily increased my dosage of estadied up to 30 my pen week. i stayed at this high dosage for a few years, until the endocrinologist noticed my prolactin levels were "too high".
i always asked questions and educated myself about trans medical treatments, such as hormone therapy and sex-reassignment surgery(SRS). i learned of the potential risks of developing blood clots or breast cancer. i enthusiastically participated in my own treatment, always questioning the medical doctors out of concern for potential discriminatory attitudes or anti-trans bias.
When my estadiol dosage was reduced on several occassions, i experienced great distress and anxiety. i felt that i had finally come so far in my medical transition. i was a full-grown, fully transitioned trans woman, with noticeably femme

appearance, breast development to a full B or C-cup, and was very happy with my femininity! :)
When my estradiol dosage was repeatedly decreased, i felt like i was under attack and that the doctor was trying to take away (reverse) my gender identity and womanhood! For me this was a deeply spiritual thing, a blessing of the Goddess - Mother Earth/Nature!
i had to file health care grievances several times at different facilities where i was not given my scheduled injection. As in the case of when my medication order, a doctor's prescription for progesterone hormone pills which the endocrinologist, Dr. Kumar, had ordered as part of my hormone therapy regimen, was then a couple months later suddenly discontinued witout any reasonable medial explanation other than "it's not allowed" per the CSHCS "Care Guide: Gender Dysphoria", which is the standard of care for transpatients used by the California Correctional Health Care

Services (CCHCS).
At that time, round 2013 - 2014, the CCHCS "Care Guide : Gender Dysphoria", and California Department of Corrections and Rehabilitation (CDCR) administrative roles and regulations governing health care in the state prisons, and the statewide medical policies and procedures on "Treatment of Transgender Persons"; were very limited to only providing the minimum amount of medical care required by Constitutional law. The California Code of Regulations (CCR), Title 15, Section 3350.1 (b) specifically prohibited sex-reassignment surgery (SRS) procedures including "castration" (orchiectomy) and "vaginoplasty". (4)
The only specific transgender health care that was authorized was authorized was psychotherapy, mental health diagnosis of GD, and hormone therapy (HRT) as medically indicated by a medical doctor, or transgender specialist. This wasn't even provided prior

to the statewide policy change adopted in 2012. (5)
However, in 2016, based on a legal settlement in the case of Shiloh Quine, and a related preceeding case involving another transwoman prisoner, Michelle Lael Nonsworthy, the CDCR/CCHCS implemented new "Guidelines for Evaluation of Requests for Sex - Reassignment Surgery (SRS)", which provided, (at least on paper), a legitimate clinical process for incarcerated trans people in California to request a medical referral for SRS and be provided a comprehensive psychological and medical evaluation to determine whether transgender in Mate/patients meet eligibility and readiness criteria for SRS, and whether SRS is "medically necessary." This determination/decision can only be by a SRS Review Committee of six medical, psychiatric, and psychologist doctors, with final approval by the CDCR/CCHCS Head Quarters Utilization

Management Committee (HQUMC). (6)
i was finally evaluated for SRS in 2016, often more than six years of advocacy work, and with a courtcase pending in State Court on the issue, but was "not approved" based on their arbitrary, adverse finding that SRS was "not medically necessary" as defined in the discriminatory, outdated CDCR regulation - CCR 3350. 1(b). However, this contradicted a previous finding of two psychiatrists in an institutional level inmate medical appeal, that i met an standard eligibility and readiness criteria, and was "granted" my requested action, a medical referral for SRS to a "surgical team".
As was documented in the Norsworthy and Quine cases and found by the federal count, there was a discriminatory predisposition against SRS being provided to transprisoner patients, and even the CDCR officials and health care staff agreed to implement new SRS guidelines, conduct clinical

evaluations, and provide the surgery in those two cases specifically, there was no inclination to begin actually providing SRS to other incarcerated transpeople. In fact, the approximately 50 such SRS referrals were flatly denied across the board, and CDCR/CCHCS continued to find that SRS was "not medically necessary" based on the still existing CCR 3350. 1(b) rule, which in spite of the new SRS guidelines remained on the books! (7)
In late 2018, after a second SRS evaluation conducted per my request, and multiple medical referrals by doctors/specialists at Salinas Valley State Prison. i was shocked to learn that i had been "approved" for SRS! i was so excited! i felt my life long struggle, my ultimate lifetime dream and goal had happened!
Initially, there was some confused, i was not told of this decision to approve SRS, and found out by accident as a

result of outside legal advocates i was working with at the National Lawyers Guild - Prisoner Advocacy Network (PAN), and attorney Allison Hardy at the Prison Law Office, who were reviewing health care records in regard to my SRS evaluation, and long-delayed follow-up the decision was never received by me from the prison doctors.
Ms. Hardy sent an email letter inquiry regarding the status of my SRS referral, as she just happened to see my name on a list of CDCR inmate. patients that had been "approved" for SRS. For some reason, i wasn't notified of this decision, even though a few months had passed from the late 2018 decision to when i was notified of it in early 2019 by Ms. Hardy. As she was one of my PLO attorneys providing legal representation in the Plata v. Brown class action lawsuit concerning the deprivation of adequate medical care by CDCR for incarcerated people/patients. (7)

Beginning in April/May 2019, i had a surgical consult in San Francisco with a surgeon, Thomas Satterwhite, M.D., of Align Surgical Associates, Inc., and began surgical prep for SRS, including a visit to Monterey dermatologist, and several months of electrolysis/hair removal. Every 2 or 3 weeks, i was transported to Bay Area Electrolysis in San Francisco for treatments by two wonderful people, Ruth Behlam and Steve Leonord, who operate their small business! They provide an essential service to the trans community and are both very professional. They are trans-friendly and would recommend them to anyone for electrolysis!
Since the COVID-19 pandemic broke out, there was a statewide, nationwide, and global public health crisis. A state of emergency was declared, the prisons and jails released thousands of inmates early, while the rest remained on indefinite lockdowns. More than 30 inmate death

as a result of COVID-19 at Chino and San Quentin within the first months!
Meanwhile, hospitals and courts were closed except for emergency cases, and Governor Gavin Newsome issued stay-at-hoe orders, along with many other states/Governors. As a result, my SRS was delayed for about ten months! i'm so frustrated and distressed! It seems after more than a decade of struggle, and legal/political advocacy, not to mention undergoing painful electrolysis treatments over the past year, i was now stuck in limbo thru 2020!
i finally resumed elecrolysis and surgical prep in January 2021, and remain strong, hopeful still pending my eventual SRS/Gender Affriming Surgery (GAS) after more than two years!
[star]

My path to Womanhood, Identity, Love, & So Much More. (New York: Atria Publications, 2014).
2. the usage of the term "Queen" by some incarcerated transwoman in California at that time is to be distinguished from "Drag Queen". Prison usage of the title "Queen" denoted pride and nobility/royalty, whereas "Drag Queen" denotes gay, male cross-dressers/female impersonators.
3. i was assigned to mandatory double-cell housing with a serial rapist and known sexually-violent predator. Sam Shumaker (aka - the Bakers field rapist) ; and when i expressed safety concerns to demand specific transgender reasonable accomedation of alternate housing, i was placed in disciplinary segregation, issued rule-violation (RVR) for "refusing a cellmate".
4. This section was repeated in 2020.
5.CCHCS Medical Policy 4.26. 1 & 2.
6. See Norsworthy v. Beard.