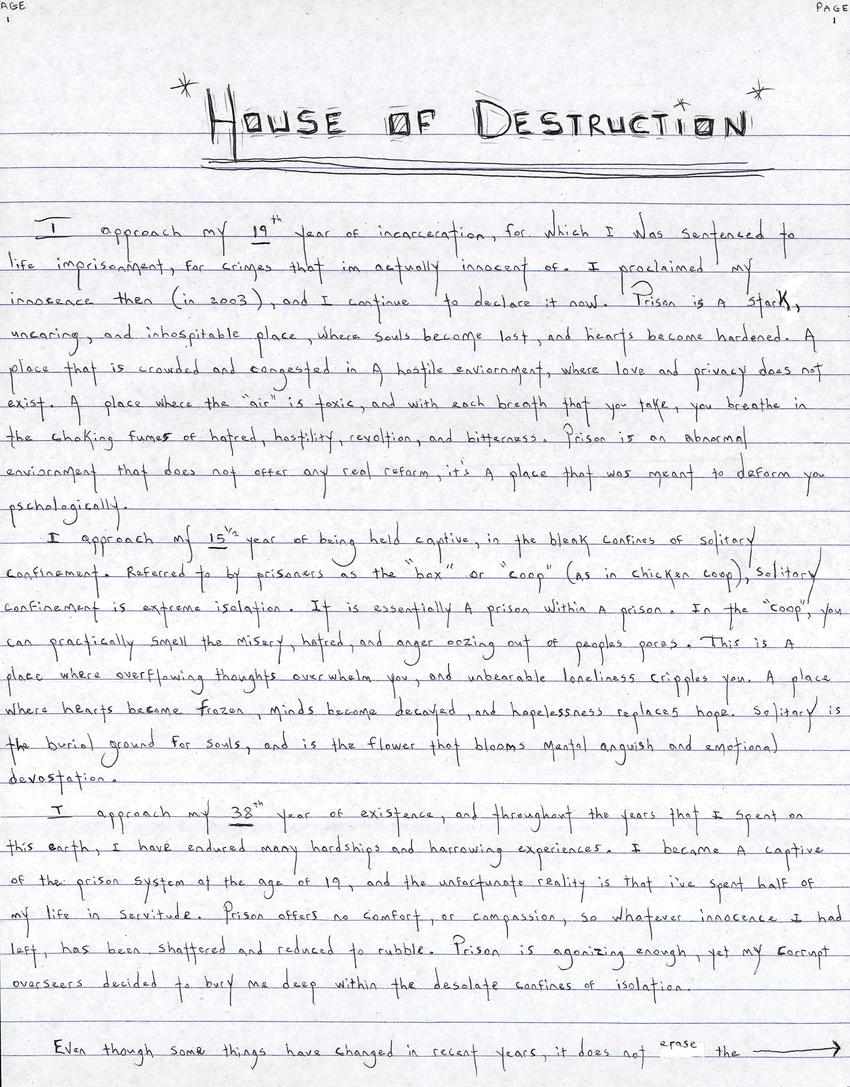 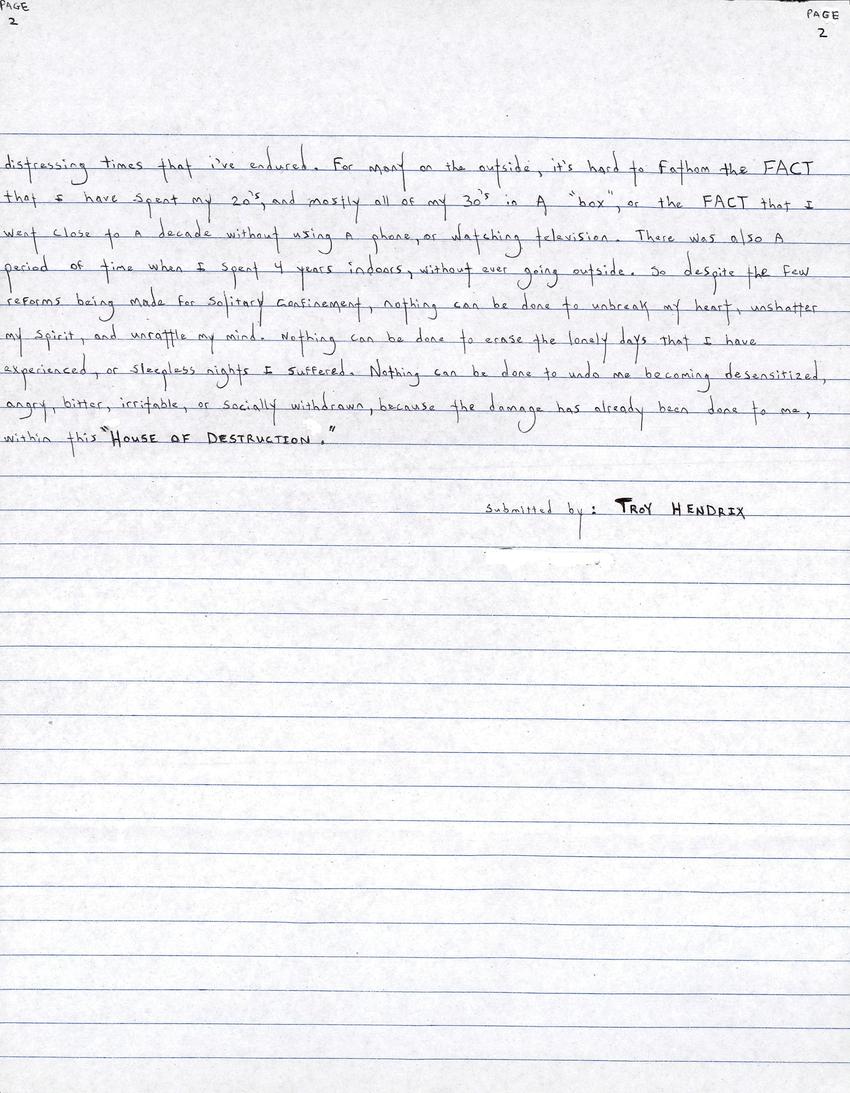 I approach my 19th year of incarceration, for which I was sentenced to life imprisonment, for crimes that im actually innocent of. I proclaimed my innocence then (in 2003), and I continue to declare it now. Prison is a stack uncaring, and inhospitable place, where souls become lost, and hears become hardened. A place that is crowded and congested in a hostile environment, where love and privacy does not exist. A place where the "air" is toxic, and with each breath that you take, you breathe in the choking fumes of hatred, hostility, revolution, and bitterness. Prison is an abnormal environment that does not offer any real reform, it's a place that was meant to deform you psychologically.

I approach my 15 1/2 year of being held captive, in the bleak confines of solitary confinement. Referred to by prisoners as the "box" or coo" ) as in chicken coop), solitary confinement is extreme isolation. It is essentially a prison within a prison. In the "coop", you can practically smell the misery, hatred, and anger oozing out of peoples pores. this is a place where overflowing thoughts overwhelm you, and unbearable loneliness cripples you. A place where hearts become frozen, minds become decayed, and hopelessness replaces hope. Solitary is the burial ground for souls, and is the flower that blooms mental anguish and emotional devastation.

I approach my 38th year of existence, and throughout the years that I spent on this earth, I have endured many hardships and harrowing experiences. I became a captive of the prison system at the age at 19, and the unfortunate reality is that i've spent half of my life in sercitude. Prison offers no comfort, or compassion, so whatever innocence I had left, has been shattered and reduced to rubble. Prison is agonizing enough, yet my corrupt overseers decided to bury me deep within the desolate confines of isolation.

Even though some things have changed in recent years, it does not erase the distressing times that i've endured. For many on the outside, it's hard to fathom the FACT that I have spent my 20's, nad mostly all of my 30's in A "box", orthe FACT that I went close to a decade without using A phone, or watching television. There was also A period of time when I spent 4 years indoors, without ever going outside. So despite the few reforms being made for solitary confinement, nothing can be done to unbreak my heart, unshatter my spirit, and unrattle my mind. Nothing can be done to erase the lonely days that I have experienced, or sleepless nights I suffered. Nothing can be done to undo me becoming desensitized, angry, bitter, irritable, or socially withdrawn, because the damage has already been done to me, within this "House of Destruction."

Thank you for sharing yourself with us. I can only imagine what it's been like to spend the last 15 1/2 years in solitary confinement. Your description of prison, and specifically solitary as the "House of Destruction," is raw and visceral. You offered me a look into your world. I can see it, feel it, touch it. I know you say nothing can be done to change what you've been through, and I believe that's true. But what if something could be done to shift the future and offer you a sense of internal peace that no one and nothing could take away from you?

I work with a nonprofit organization called The Unconditional Freedom Project. Our vision is to transform prisons into monasteries, recasting the penitentiary as a place to contemplate and meaningfully contribute. We are not a religious program, though I know language like monastery can often be associated with that. We do believe that with the right resources, prison could be a monastic environment that encourages human flourishing though.

I have a workbook I'd like to offer you, and it can be sent directly from our publisher. It's called The Art of Soulmaking: The Path to Unconditional Freedom.

Our Art of Soulmaking program provides tools for improving the interior lives of incarcerated people. This 8-week course guides a person through a journey of inquiry and personal liberation. It starts with building a foundation of practice through journaling, soul searching exercises, yoga and meditation. From there, participants walk through four lessons on reclaiming power and restoring dignity.

We know that people do not change in isolation, that's why I was so moved by your solitary confinement post. Change happens when we recognize the whole of a human. Another component of our program is exchanging letters with a Volunteer Correspondent who is also on their own Soulmaking journey. The desire to feel truly seen by another, to be felt by another, is what makes us human. Not only is it natural, it is medicine. It’s essential to grow.

Would you be interested in receiving an Art of Soulmaking workbook to explore the program and write with a pen pal? If so, let me know where to send and I will have our publisher ship one out to you.

Wishing you health, safety, and peace.

Reading your eloquent writing, I'm almost tempted to feel sorry for you. But then I think of how Romona died and all I can feel is satisfaction. You deserve your punishment. May you live a long life in that place and think about what you've done.
Hey my name is Bella I’m 25 and something about you called my name I know ur looking for a friendship and here I am. I’m Dominican and it’s crazy some times I feel so alone despite having everything I ever needed and wanted from house, to car to job but I be feeling alone and I could imagine out of all the inmates I saw you’re the only one that caught my attention.
(scanned reply – view as blog post)
uploaded July 28, 2021.  Original (PDF) 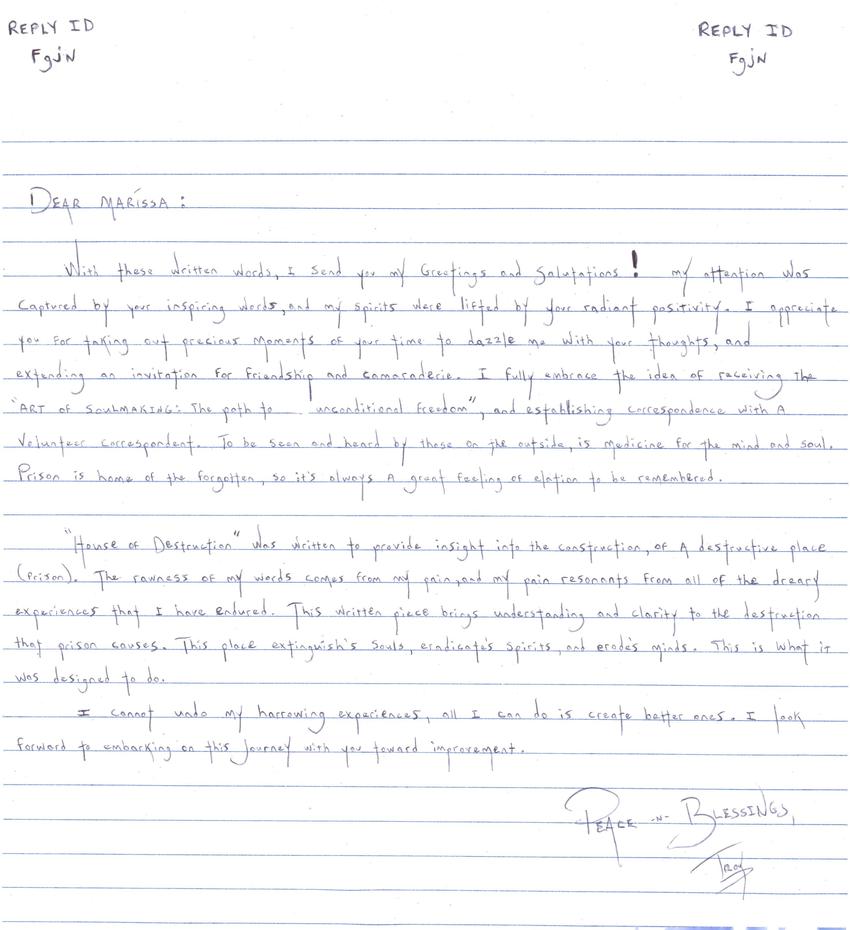 I read an essay that you wrote on this blog site a few years ago entitled “HOPELESS JUSTICE” and I loved it. I don’t know you but believe that you are innocent this system incarcerates innocent people all the time and I know from experience. Keep fighting for your freedom and I will keep fighting with you
To my king we have been on this rocky road together from for several years now and since day one I have believe in your innocence and I will continue to believe in your innocence. You have me & many many other supporters who will fight right beside you and continue to fight until your freedom is restored. I recently heard your podcast interview and I was inspired and impressed by the power of your words and the strength. The world should hear your voice.it’s prisonskills podcast #prisonkills
Always remember to keep your head to the sky and never put it down. Your words and how you articulate to others are inspirational. How strong you've been over the years to not give up is an inspiration. When I recently heard your podcast and the strength in everything you went through over the years shows how powerful of a person you are.
Peace Troy - continue to shine light into the darkest parts of the amerikan society. Your pen and your voice are tools allow us on the outside to see the horrors of what happens in the dungeons.

I hope one day that everyone is on the right side of these prison walls.

Assata once wrote, “And, If I know anything at all/Its that a wall is just a wall/And nothing more at all/It can be broken down.”

Peace and love, Troy
I just heard your podcast interview and it was great everyone should listen to it. (Prisonskills.Wordpress.com) https://prisonskill.wordpress.com/
(scanned reply – view as blog post)
uploaded Sept. 7, 2021.  Original (PDF) 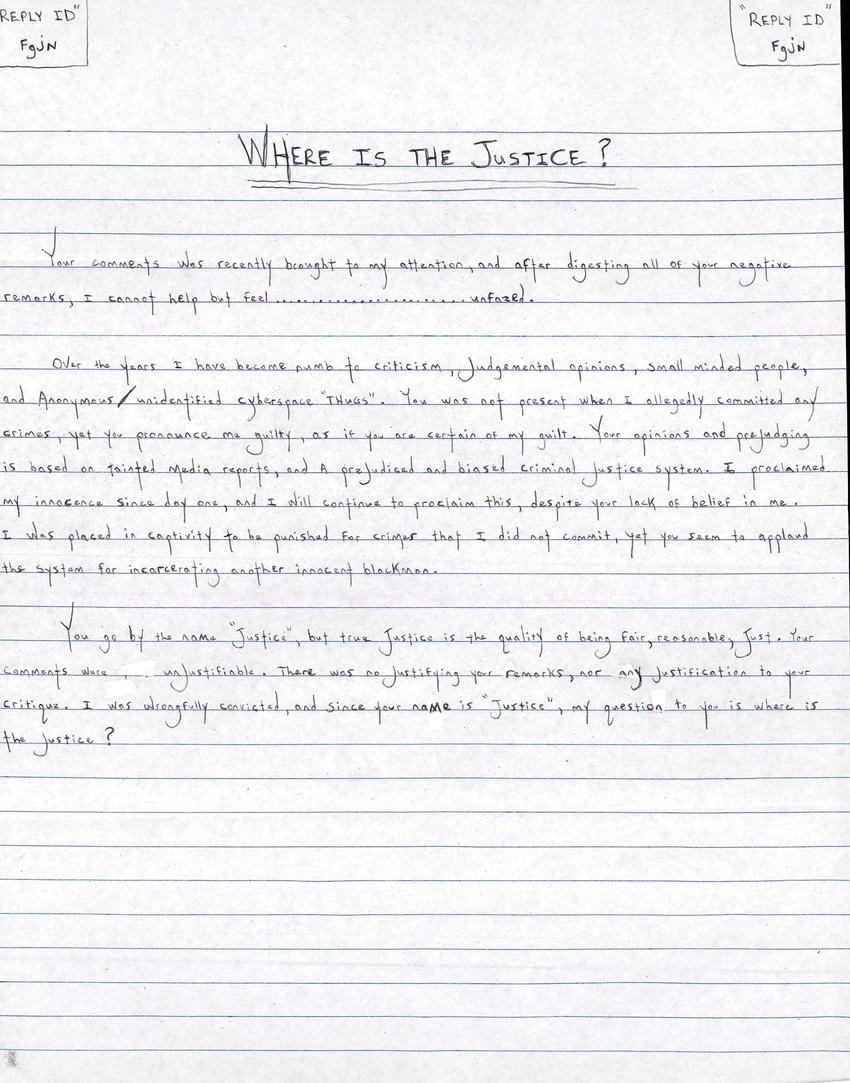 I just read the comment that you posted called “where is the justice?” And I really liked how you put people in their place in a positive way. Ignore the haters and just embrace those that got love for you google Troy podcast interview (prisonskill podcast on apple podcasts)
From the first day We met I could not denied our connection and bond it was like we was meant to be by each other side. I was in a dark place and despite your current situation you was able to save my life and save me from drowning and for that I will always be grateful to you. You are a wonderful, gentle man who has always shown me how much you love me and I truly can’t wait for the day that you are free because I do believe that you are innocent. Everyone needs to listen to your podcast which ( prisonskill podcast on apple podcasts )
So everyone can hear your story and they will feel the same way that many do!!
Your innocence will be proven and you will be free and i definitely can’t wait for that day!! I love u babe
Sorry but you are NOT innocent. Actually not sorry. There was no travesty except in the case of the victim who you and your friend brutally beat raped and killed. A beautiful young woman with her whole life ahead of her whose life was viciously taken by YOU. The only person who was deprived of justice was her. You got a fair trial with adequate defense. The evidence and witnesses speak to your guilt. Your protestations of innocence are hollow and show more your lack of remorse for the violence you wrought upon poor Romona Moore, who is far more deserving of sympathy than you.