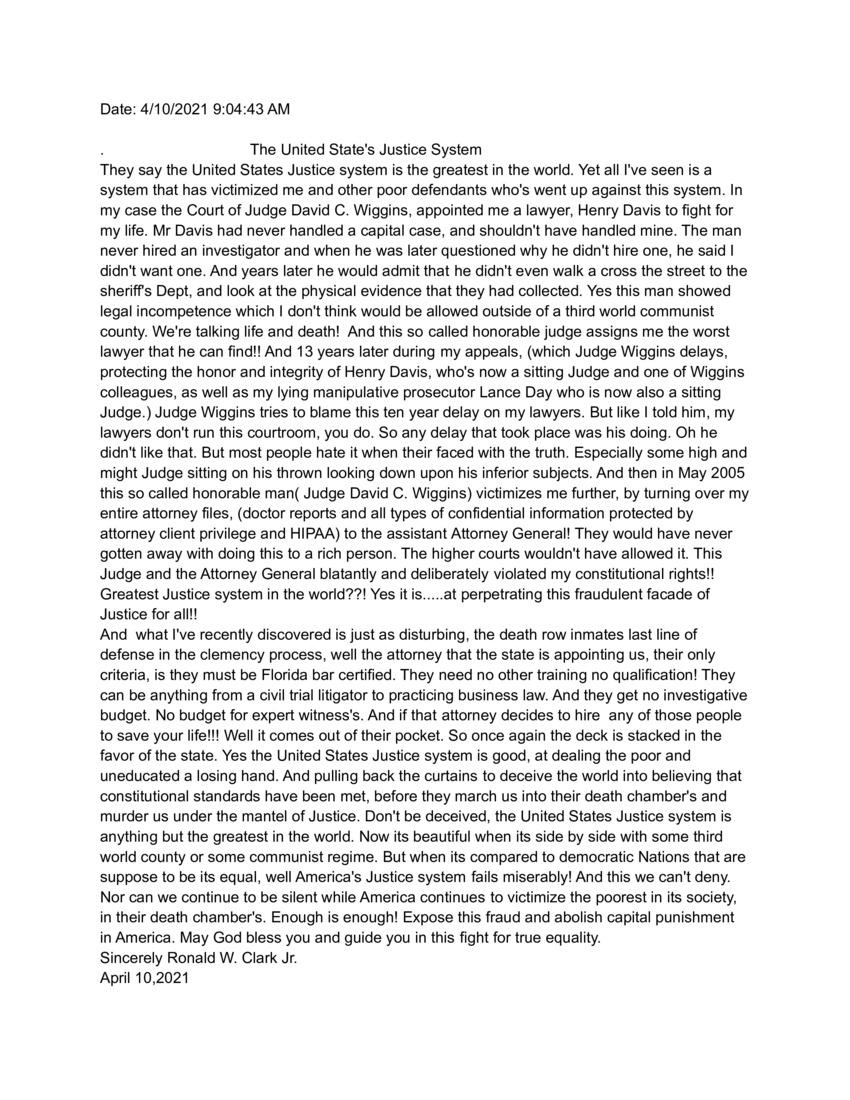 They say the United States Justice system is the greatest in the world. Yet all I've seen is a system that has victimized me and other poor defendants who's went up against this system. In my case the Court of Judge David C. Wiggins, appointed me a lawyer, Henry Davis to fight for my life. Mr. Davis had never handled a capital case, and shouldn't have handled mine. The man never hired an investigator and when he was later questioned why he didn't hire one, he said I didn't want one. And years later he would admit that he didn't even walk across the street to the Sheriff's Dept, and look at the physical evidence they had collected. Yes this man showed legal incompetence which I don't think would be allowed outside of a third world communist country. We're talking life and death! And this so called honorable judge assigns me the worst lawyer that he can find!! And 13 years later during my appeals, (which Judge Wiggins delays, protecting the honor and integrity of Henry Davis, who's now a sitting Judge and one of Wiggins' colleagues, as well as my lying manipulative prosecutor Lance Day who is now also a sitting Judge). Judge Wiggins tries to blame this ten year delay on my lawyers. But like I told him, my lawyers don't run this courtroom, you do. So any delay that took place was his doing. Oh he didn't like that. But most people hate it when they're faced with the truth. Especially some high and mighty Judge sitting on his throne looking down upon his inferior subjects. And then in May 2005 this so called honorable man (Judge David C. Wiggins) victimizes me further, by turning over my entire attorney files, (doctor reports and all types of confidential information protected by attorney client privilege and HIPAA) to the assistant Attorney General! They would have never gotten away with doing this to a rich person. The higher courts wouldn't have allowed it. This Judge and the Attorney General blatantly and deliberately violated my constitutional rights!! Greatest Justice system in the world??! Yes it is..... at perpetrating this fraudulent façade of Justice for all.
And what I've recently discovered is just as disturbing, the death row inmates last line of defense in the clemency process, well the attorney that the state is appointing us, their only criteria, is they must be Florida bar certified. They need no other training no qualification! They can be anything from a civil trial litigator to practicing business law. And they get no investigative budget. No budget for expert witness's. And if that attorney decides to hire any of those people to save your life!!! Well it comes out of their pocket. So once again the deck is stacked in the favor of the state. Yes the United States Justice system is good, at dealing the poor and uneducated a losing hand. And pulling back curtains to deceive the world into believing that constitutional standards have been met, before they march us into their death chamber's and murder us under the mantel of Justice. Don't be deceived, the United States justice system is anything but the greatest in the world. Now its beautiful when its side by side with some third world county or some communist regime. But when its compared to democratic Nations that are suppose to be its equal, well America's Justice system fails miserably! And this we can't deny. Nor can we continue to be silent while America continues to victimize the poorest in its society, in their death chamber's. Enough is enough! Expose this fraud and abolish capital punishment in America. May God bless you and guide you in this fight for true equality.
Sincerely Ronald W. Clark Jr.
April 10, 2021