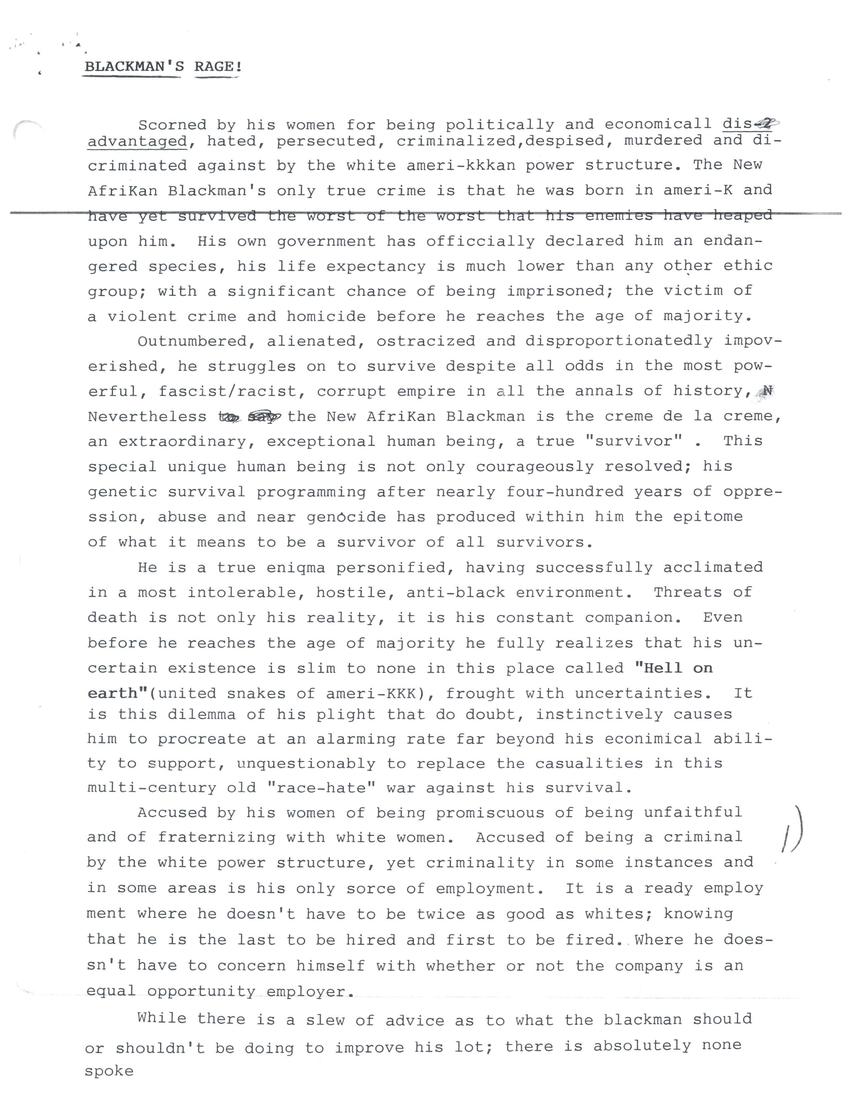 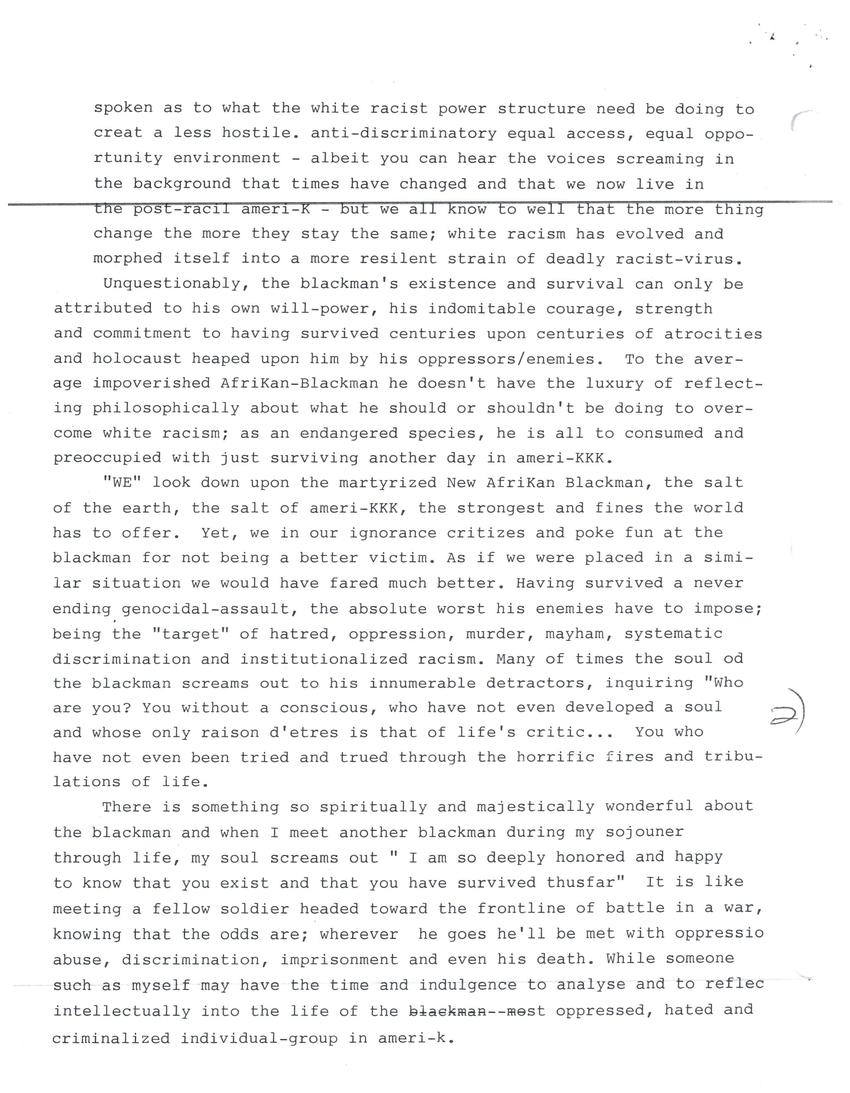 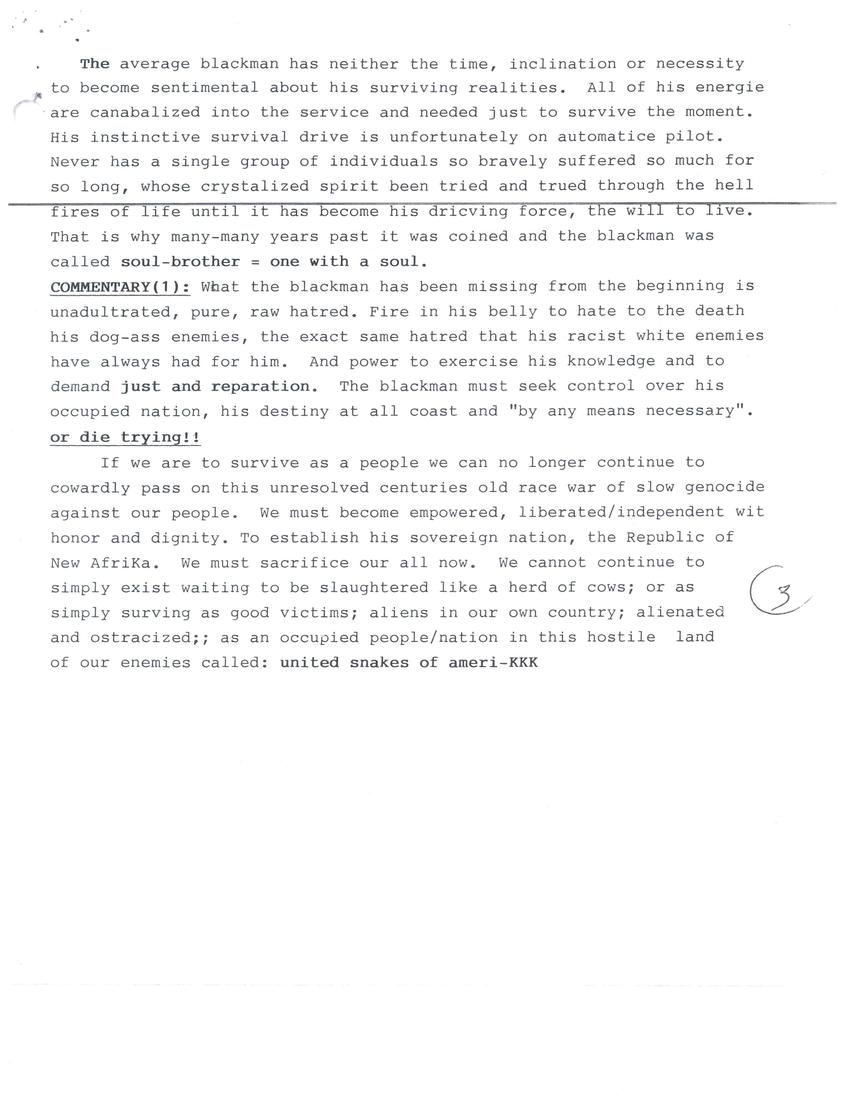 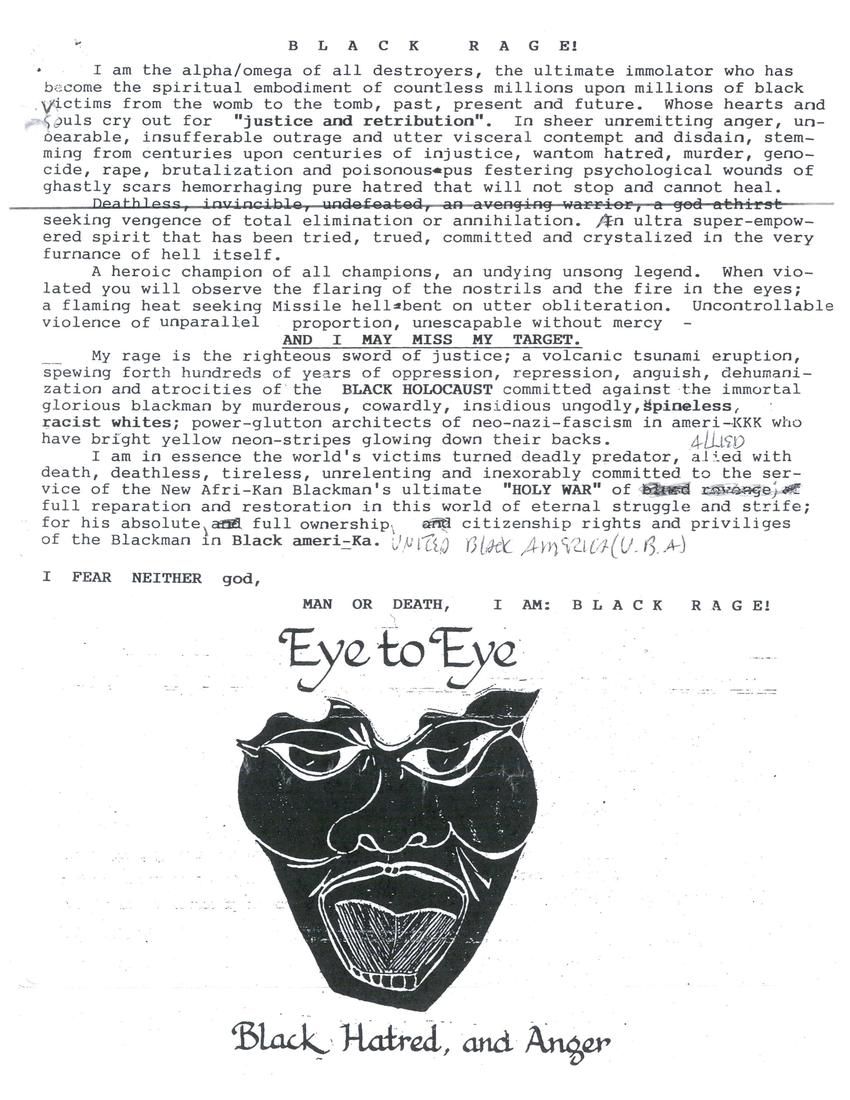 Outnumbered, alienated, ostracized and disproportionately impoverished, he struggles on to survive despite all odds in the most powerful, facist, racist, corrupt empire in all the annals of history, Nevertheless the New AfriKan Blackman is the creme de la creme, an extraordinary, exceptional human being, a true "survivor" . This special unique human being is not only courageously resolved; his genetic survival programming after nearly four-hundred years of oppre-ssion, abuse and near genocide has produced within him the epitome of what it means to be a survivor of all survivors.

He is a true enigma personified, having successfully acclimated in a most intolerable, hostile, anti-black environment. Threats of death is not only his reality, it is his constant companion. Even before he reaches the age of majority he fully realizes that his un-certain existence is slim to none in this place called "Hell on earth" (united snakes of ameri-KKK), drought with uncertainties. It is this dilemma of his plight that do doubt, instinctively causes him to procreate at an alarming rate far beyond his economical abili-ty to support, unquestionably to replace the casualties in this multi-century old "race-hate" war against his survival.

Accused by his women of being promiscuous of being unfaithful and of fraternizing with white women. Accused of being a criminal by the white power structure, yet criminality in some instances and in some areas is his only source of employment. It is a ready employ meant where he doesn't have to be twice as good as whites; knowing that he is the last to be hired and first to be fired. Where he does-sn't have to concern himself with whether or not the company is an equal opportunity employer.

While there is a slew of advice as to what the blackman should or shouldn't be doing to improve his lot; there is absolutely none spoke

spoken as to what the white racist power structure need be doing to creat a less hostile. anti-discriminatory equal access, equal oppo-rtunity environment - albeit you can hear the voices screaming in the background that times have changed and that we now live in post-racil ameri-K - but we all know to well that the more thing change the more they stay the same; white racism has evolved and morphed itself into a more resilent strain of deadly racist-virus.

Unquestionably, the blackman's existence and survival can only be attributed to his own will-power, his indomitable courage, strength and commitment to having survived centuries of atrocities and holocaust heaped upon him by his oppressors/enemies. to the aver-age impoverished AfriKan-Blackman he doesn't have the luxury of reflect-ing philosophically about what he should or shouldn't be doing to over-come white racism; as an endangered species he is all to consumed and preoccupied with just surviving another day in ameri-KKK.

"WE" look down upon the martyrized New AfriKan Blackman, the salt of the earth, the salt of ameri-KKK, the strongest and fines the world has to offer. Yet, we in our ignorance critizes and poke fun at the blackman for not being a better victim. As if we were placed in a simi-lar situation we would have fared much better. Having survived a never ending genocidal-assault, the absolute worst his enemies have to impose; being the "target" of hatred, oppression, murder, mayham, systematic discrimination and institutionalized racism. Many of times the soul of the blackman screams out to his innumerable detrcators, inquiring "Who are you? You without a conscious, who have not even developed a soul and whose only raison d'etres and trued through the horrific fires and tribu-lations of life.

There is something so spiritually and majestically wonderful about the blackman and when I meet another blackman during my sojouner through life, my soul screams out " I am so deeply honored and happy to know that you exist and that you have survived thusfar" It is like meeting a fellow soldier headed toward the frontline of battle in a war, knowing that the odds are; wherever he goes he'll be met with oppression abuse, discrimination, imprisonment and even his death. While someone such as myself may have the time and indulgence to analyse and to reflect intellectually into the life of the oppressed, hated and criminalized individual-group in ameri-k.

The average blackman has neither the time, inclination or necessity to become sentimental about his surviving realities. All of his energie are canabalized into the service and needed just to survive the moment. His instinctive survival drive is unfortunately on automatic pilot. Never has a single group of individuals so bravely suffered so much for so long, whose crystalized spirit been tried and trued through the hell fires of life until it has become his driving force, the will to live. That is why many-many years past it was coined and the blackman was called soul-brother = one with a soul.
Commentary(1): What the blackman has been missing from the beginning is unadulterated, pure, raw hatred. Fire in his belly to hate to the death his dog-ass enemies. the exact same hatred that his racist white enemies have always had for him. And power to exercise his knowledge and to demand just and reparation. The blackman must seek control over his occupied nation, his destiny at all coast and "by any means necessary". or die trying!!

If we are to survive as a people we can no longer continue to cowardly pass on this unresolved centuries old race war of slow genocide against our people. We must become empowered, liberated/independent wit honor and dignity. To establish his sovereign nation, the Republic of New AfriKa. We must sacrifice our all now. We cannot continue to simply waiting to be slaughtered like a herd of cows; or as simply serving as good victims; aliens in our own country; alienated and ostracized;; as an occupied people/nation in this hostile land of our enemies called: united snakes of ameri-KKK

I am the alpha/omega of all destroyers, the ultimate immolator who has become the spiritual embodiment of countless millions upon millions of black victims from the womb to the tomb, past, present and future. Whose hearts and would cry out for "justice and retribution". In sheer unremitting anger, un-bearable, insufferable outrage and utter visceral contempt and disdain, stem-ming from centuries upon centuries of injustice, wantom hatred, murder, geno-ghastly scars hemorrhaging pure hatred that will not stop and cannot heal.

Deathless, invincible, undefeated, an avenging warrior, a god athirst seeking vengeance of total elimination or annihilation. An ultra super-empow-ered spirit that has been tried, trued, committed and crystalized in the very furnace of hell itself.

A heroic champion of all champions, an undying unsong legend. When vio-lated you will observe the flaring of the nostrils and the fire in the eyes; a flaming heat seeking Missile hell bent on the utter obliteration. Uncontrollable violence of unparallel proportion, inescapable without mercy -

AND I MAY MISS MY TARGET

My rage is the righteous sword of justice; a volcanic tsunami eruption, spewing forth hundreds of years of oppression, repression, anguish, dehuman-zation and atrocities of the BLACK HOLOCAUST committed against the immortal glorious blackman by murderous, cowardly, insidious ungodly, spineless, racist whites; power-glutton architects of neo-nazi-fascism in ameri-KKK who have bright yellow neon-stripes glowing down their backs.