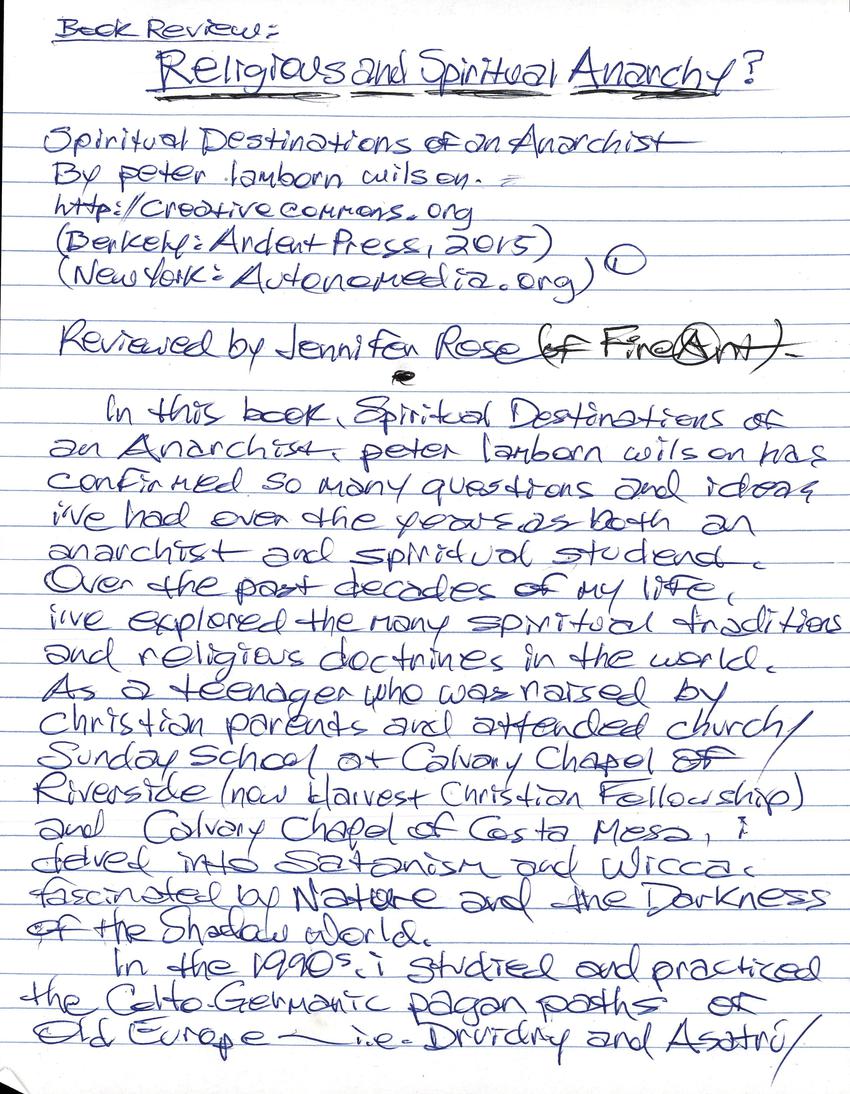 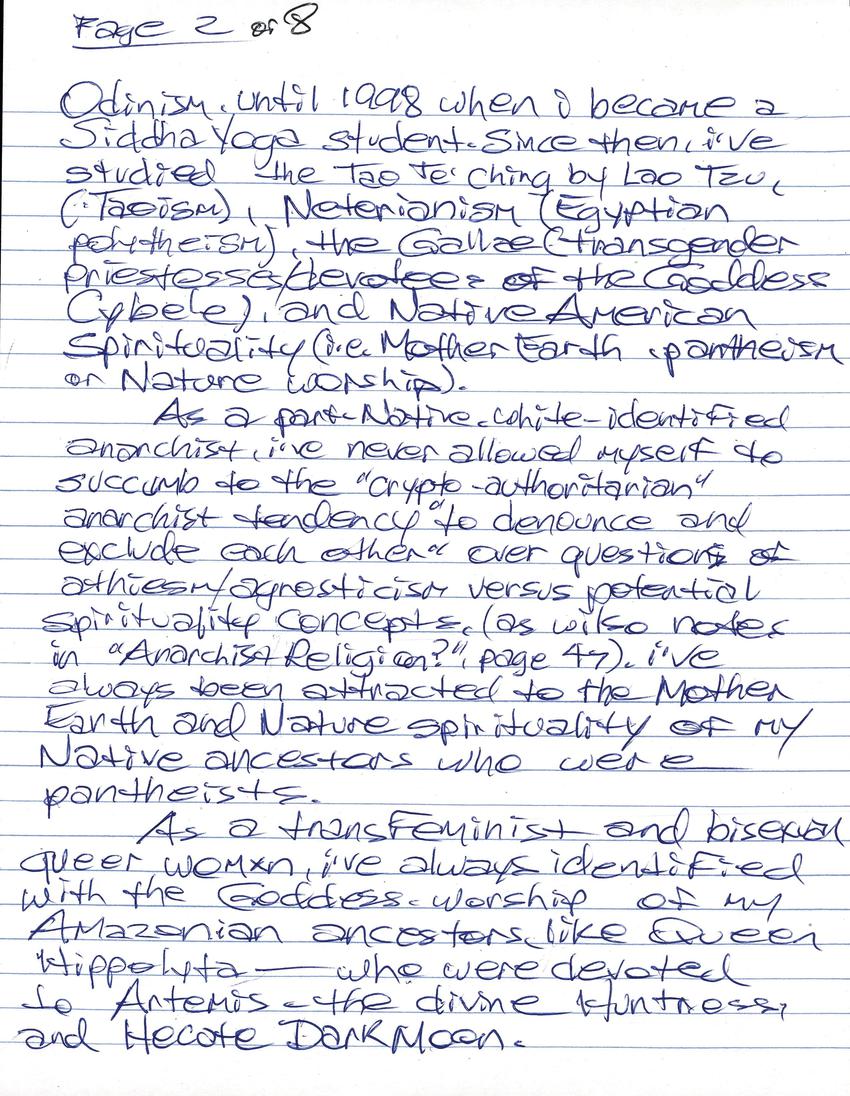 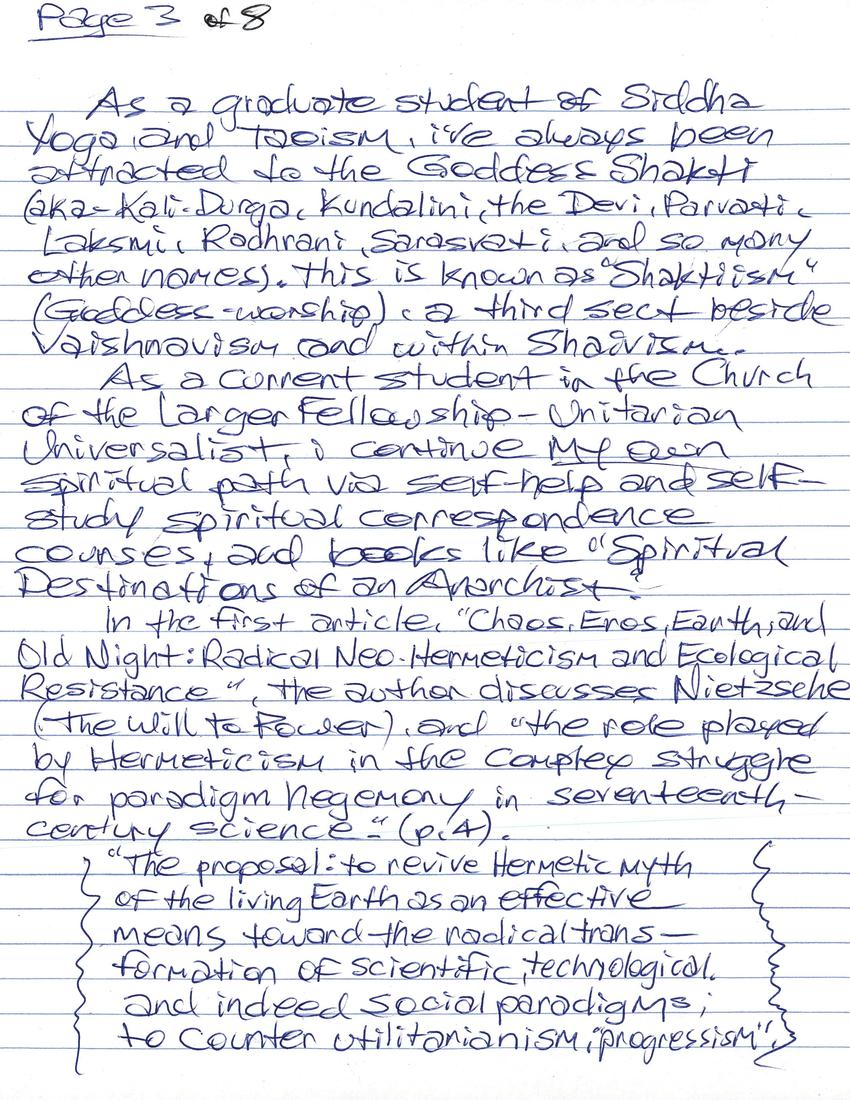 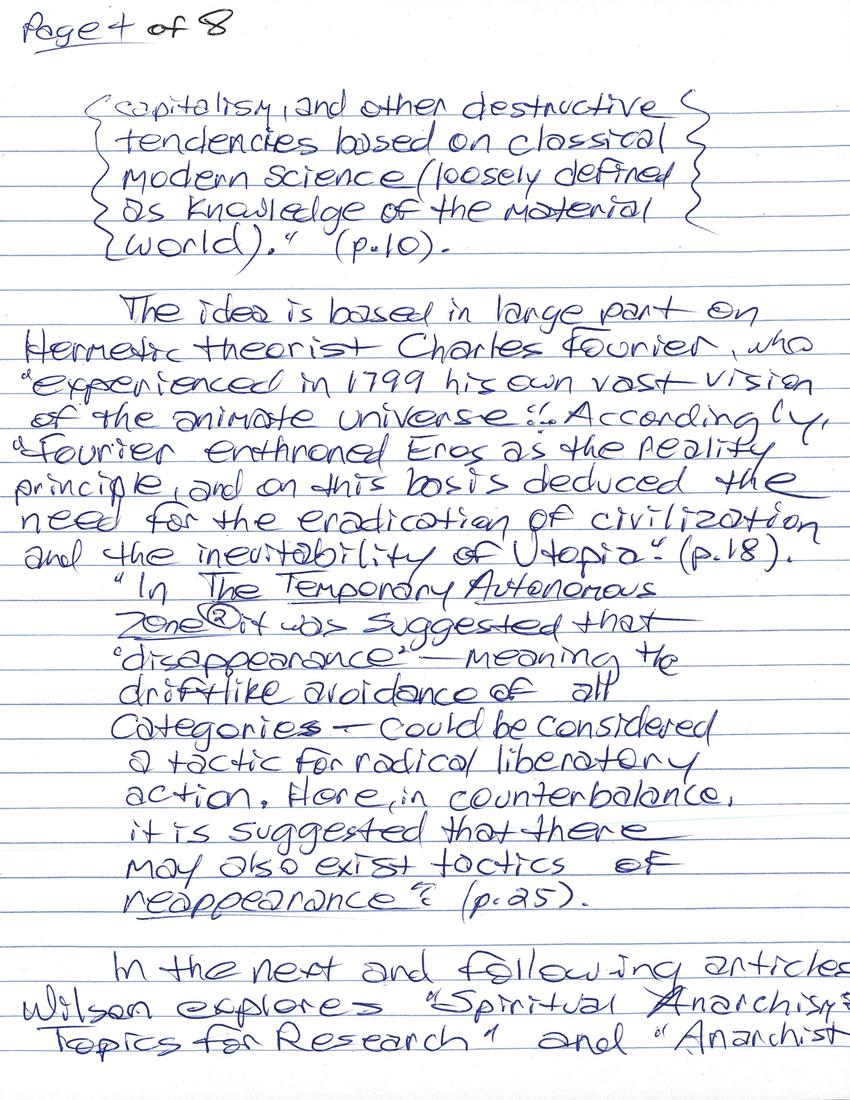 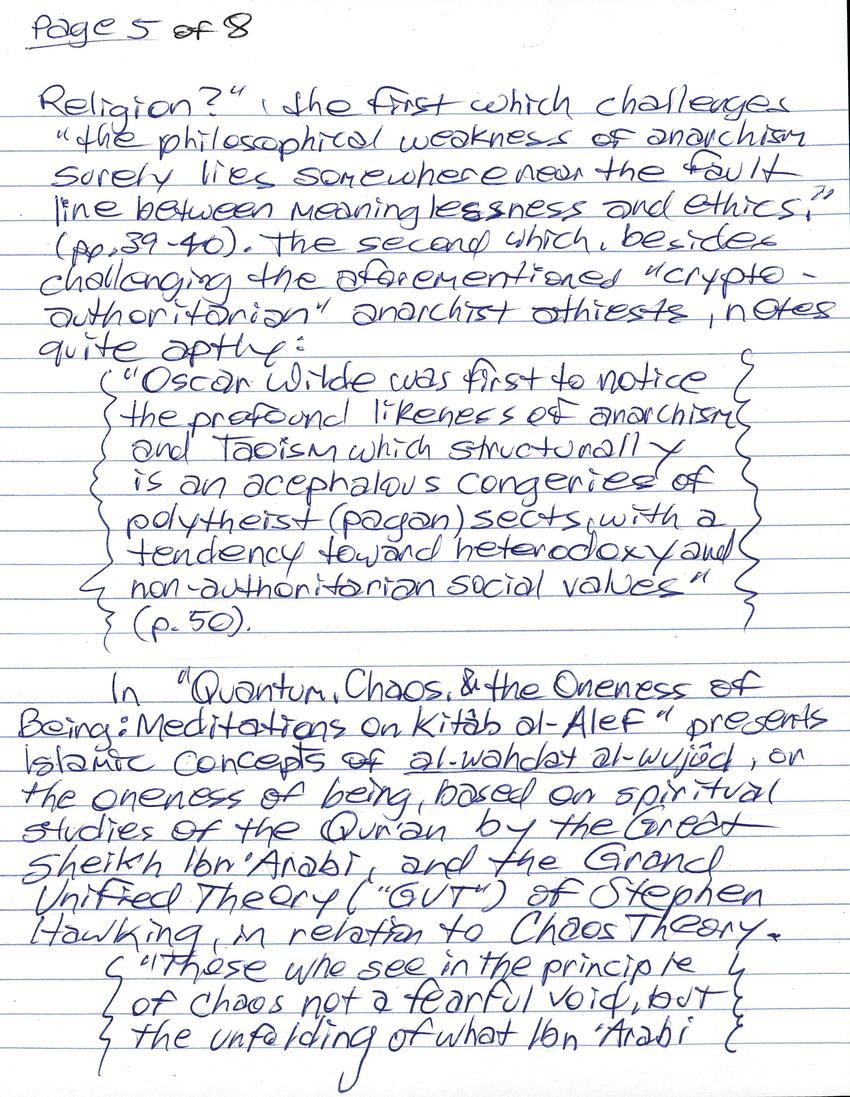 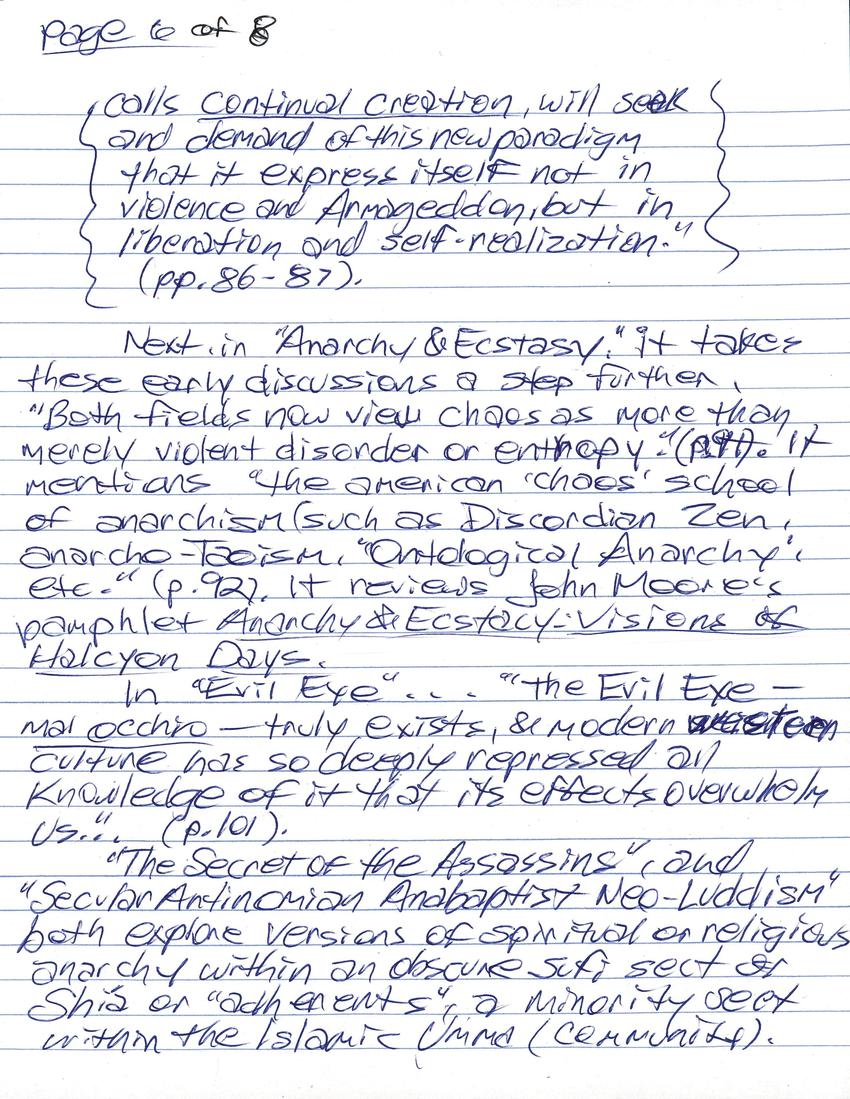 Reviewed by Jennifer Rose (of FireAnt).

In this book, Spiritual Destinations of an Anarchist, Peter Lamborn Wilson has confirmed so many questions and ideas I've had over the years as both an anarchist and spiritual student. Over the past decades of my life, I've explored the many spiritual traditions and religious doctrines in the world. As a teenager who was raised by Christian parents and attended church/Sunday school at Calvary Chapel of Riverside (now Harvest Christian Fellowship) and Calvary Chapel of Costa Mesa, i delved into Satanism and Wicca, fascinated by Nature and the the Darkness of the Shadow World.
In the 1990s, i studied and practiced the Celto-Germanic pagan paths of Old Europe - i.e. Druidry and Asatru/Odinism until 1998 when i became a Siddha Yoga student. Since then i've studied the Tao Te' Ching by Lao Tau, (Taoism), Neterianism (Egyptian polytheism), the Gallae (transgender priestesses/devotees of the Goddess Cybele), and Native American Spirituality (i.e. Mother Earth pantheism or Nature worship).
As a part-Native white-identified anarchist, i've never allowed myself to succumb to the "crypto-authoritarian" anarchist tendency" to denounce and exclude each other" over questions of atheism/agnosticism versus potential spirituality concepts, (as Wilson notes in "Anarchist Religion?", page 47). i've always been attracted to the Mother Earth and Nature spirituality of my Native spirituality of my Native ancestors who were panthesits.
As a transfeminist and bisexual queer womxn, i've always identified with the Goddess worship of my Amazonian ancestors like Queen Hippolyta - who were devoted to Artemis - the divine Huntress, and Hecate Dark Moon.
As a graduate student of Siddha Yoga and Taoism, i've always been attracted to the Goddess Shakti (aka- Kali Durga, Kundalini, the Devi, Parvatic Laksmi, Radhrani, Sarasvai, and so many other names). This is known as "Shaktiism" (Goddess-worship), a third sect beside Vaishnavism and within Shaivism.
As a current student in the Church of the Larger Fellowship-Unitarian Universalist, i continue my own spiritual path via self-help and self-study spiritual correspondence courses and books like "Spiritual Destinations of an Anarchist".
In the first article, "Chaos, Eros, Earth, and Old Night: radical Neo-Hermeticism and Nietzsche (The Will to Power), and "the role played by Hermeticism in the complex struggle for paradigm hegemony in seventeenth - century science." (p. 4).
"The proposal: to revive Hermetic Myth of living Earth as an effective means toward the radical transformation of scientific, technological and indeed social paradigms; to counter utilitarianism; "progressism" capitalism, and other destructive tendencies based on classical modern science (loosely defined as knowledge of the material world)." (p.10).
The idea is based in large part on Hermetic theorist Charles Fourier, who "experienced in 1799 his own vast vision of the animate universe." Accordingly, "Fourier enthroned Eros as the reality principle, and on this basis deduced the need for the eradication of civilization and the inevitability of Utopia." (p.18).
"In The Temporary Autonomous Zone (2) it was suggested that 'disappearance' - meaning the driftlike avoidance of all categories - could be considered a tactic for radical liberatory action. Here in counterbalance, it is suggested that there may also exist tactics of reappearance." (p.25)
In the next and following articles Wilson explores "Spiritual Anarchism: Topics for Research" and "Anarchist Religion?" the first which challenges "the philosophical weakness of anarchism sorely lies somewhere near the fault line between meaning lessons and ethics." (pg. 39-40). The second which besides challenging the aforementioned "crypto-authoritarian" anarchist athiests, notes quite aptly:
"Oscar Wilde was first to notice the profound likeness of anarchism and Taoism which structurally is an acephalous congeries of polytheist (pagan) sects, with a tendency toward heterodoxy and non-authoritarian social values" (p. 50).
In "Quantum, Chaos, & the Oneness of Being: Meditations on Kitab al-Alef" presents Islamic concepts of al-wahchat al-wujud, on the oneness of being based on spiritual studies of the Quran by the Great Sheikh Ibri Arabi, and the Grand Unified Theory ("GUT") of Stephen Hawking in relation to Chaos Theory.
"These who see in the principle of chaos not a fearful void, but the unfolding of what Ibn Arabi calls continual creation, will seek and demand of this new paradigm that it express itself not in violence and Armageddon, but in liberation and self-realization." (pp. 86-87).
Next in "Anarchy & Ecstasy" it takes these early discussions a step further "Both fields now view chaos as more than merely violent disorder or enthopy." (p. 91). It mentions "the americna 'chaos' school of anarchism (such as Discordian Zen anarcho-Taoism "ontological Anarchy" etc." (p. 92). It reviews John Moore's pamphlet Anarchy & Ecstacy Visions of Halcyon Days.
In "Evil Eye" ... "The Evil Eye- mal occhio - truly exists, & modern culture has so deeply repressed an knowledge of it that effects overwhelm us." (p. 101).
"The Secret of the Assassins", and "Secular Antinomian Anabaptist Neo-Luddism" both explore versions of spiritual or religious anarchy within an obscure sufi sect of Shia or "actherents" a minority sect within the Islamic Umma (community). and within Old Order Amish, Mennonities, Brethren, Quakers, Bruderhof, etc. who are decended for the origina; anabaptists who were "out-and-out" antinomian anarchists"! (p. 132) (3)