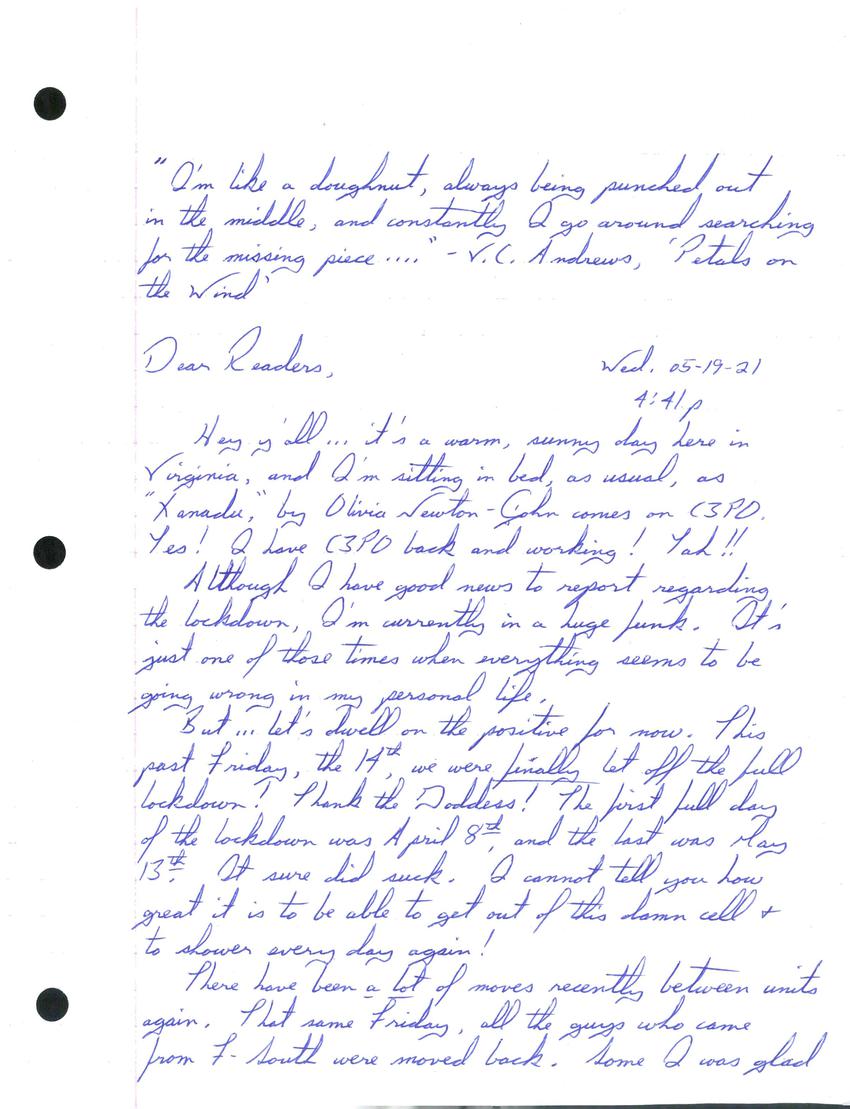 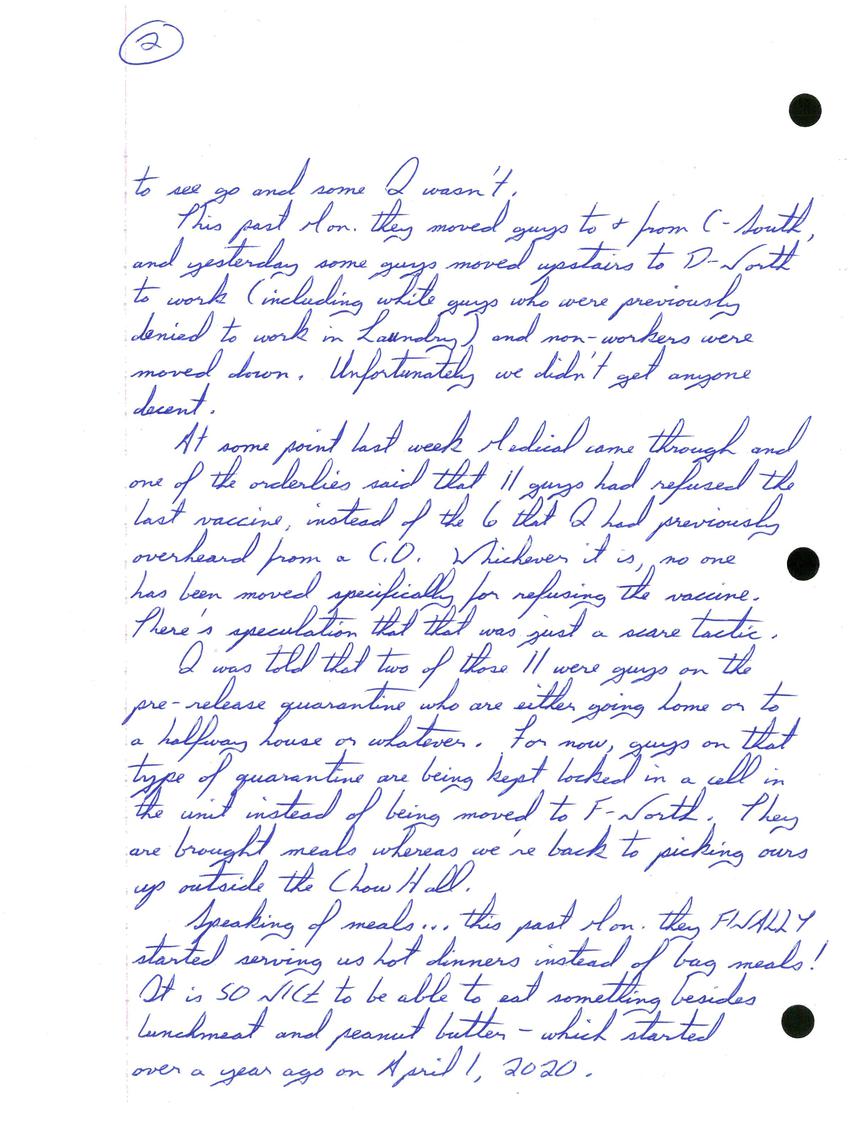 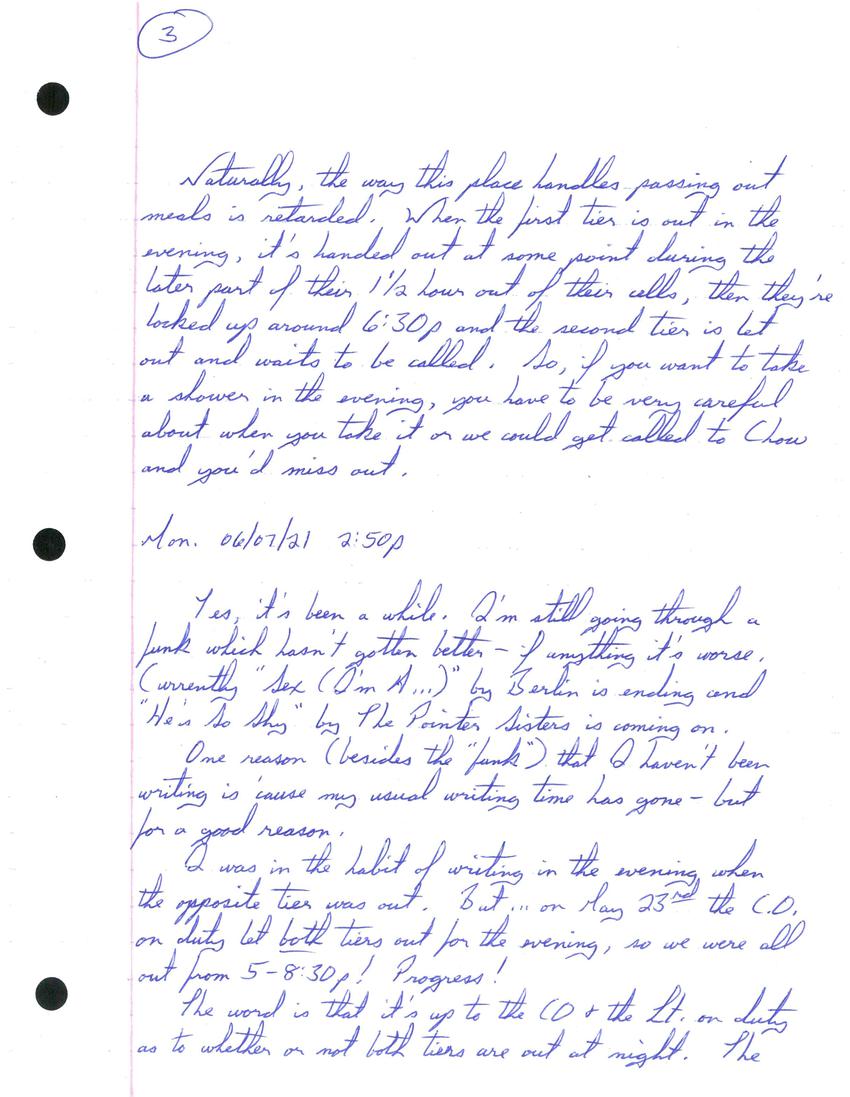 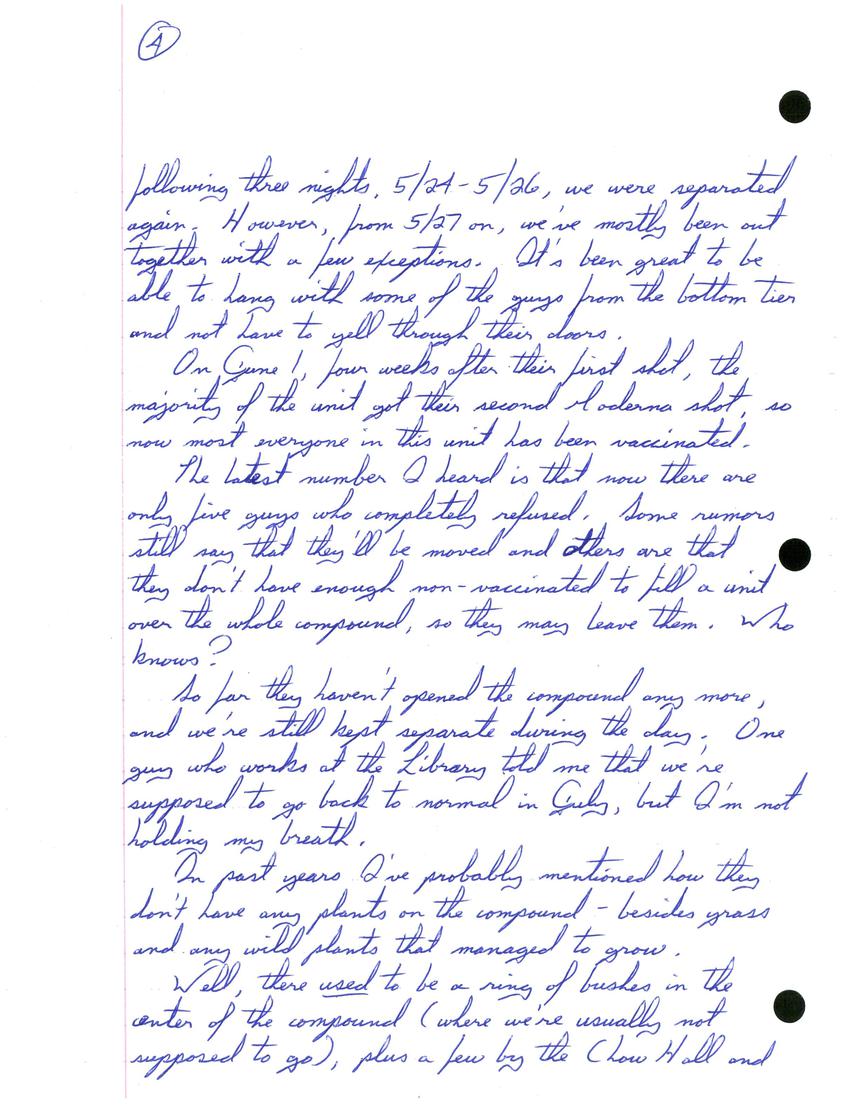 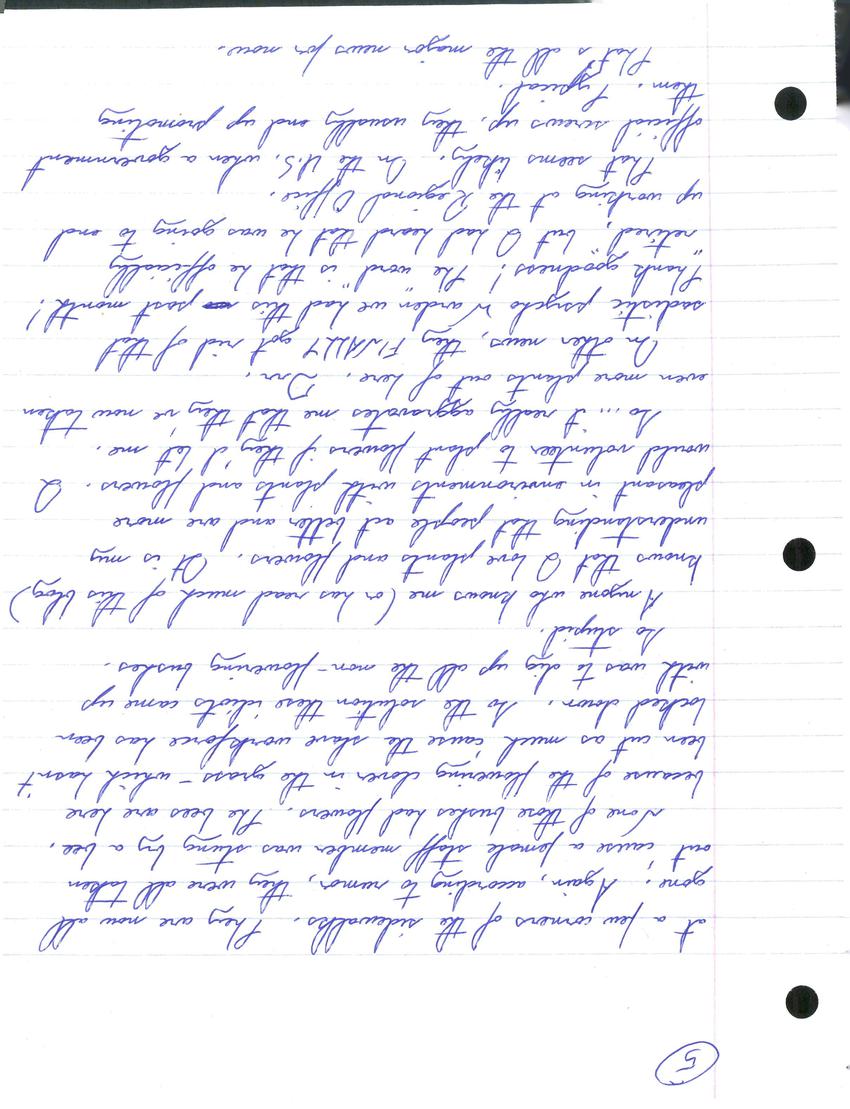 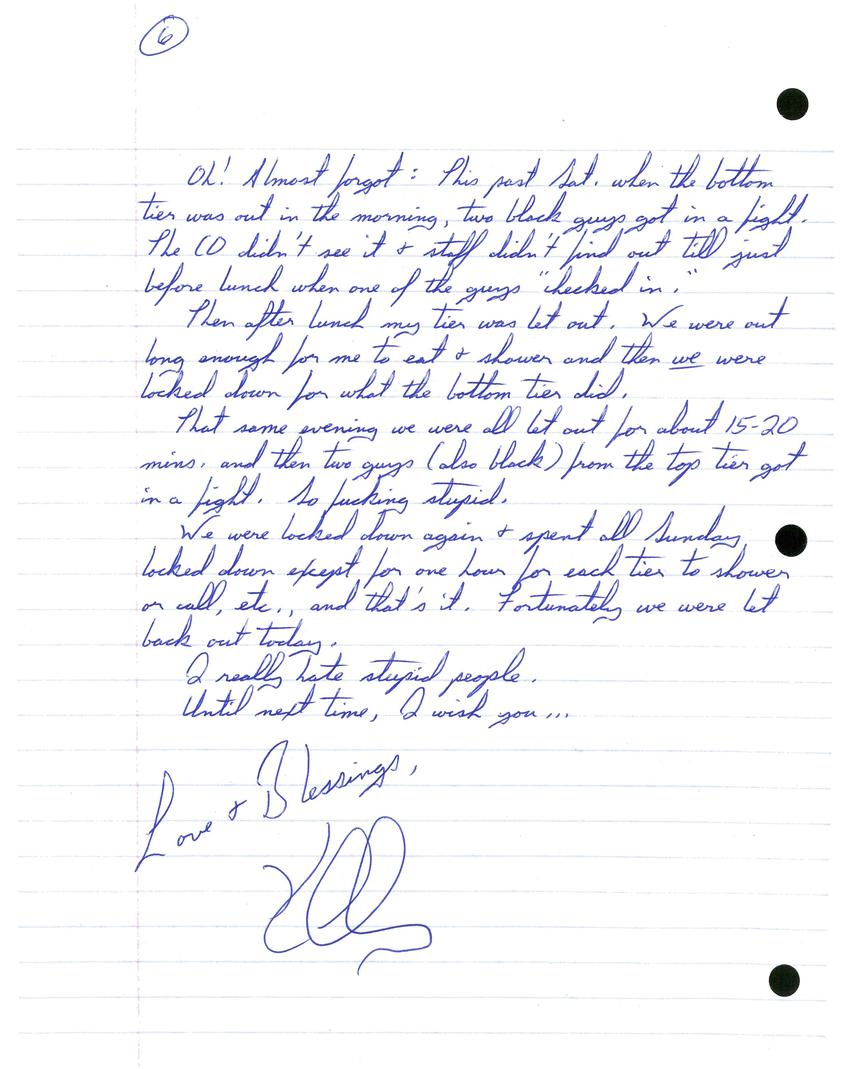 "I'm like a doughnut, always being punched out in the middle, and constantly I go around searching for the missing piece...." - V.C. Andrews, 'Petals in the Wind'

Hey y'all... it's a warm, sunny day here in Virginia, and I'm sitting in bed, as usual, as "Xanadu," by Olivia Newton-John comes on C3PD. Yes! I have C3PD back and working! Yah!!

Although I have good news to report regarding the lockdown, I'm currently in a huge funk. It's just one of those times when everything seems to be going wrong in my personal life.

But... let's dwell on the positive for now. This past Friday, the 14th, we were finally let off the full lockdown! Thank the Goddess! The first full day of the lockdown was April 8th, and the last was May 13th. It sure did suck. I cannot tell you how great it is to be able to get out of this damn cell & to shower every day again!

There have been a lot of moves recently between units again. That same Friday, all the guys who came from F. South were moved back. Some I was glad to see go and some I wasn't.

This past Mon. they moved guys to & from C-South, and yesterday some guys moved upstairs to D-South to work (including white guys who were previously [[?]] to work in laundry) and non-workers were moved down. Unfortunately we didn't get anyone decent.

At some point last week I [[?]] came through and one of the orderlies said that II guys had refused the last vaccine, instead of the 6 that I had previously overheard from a C.D. Whichever it is, no one has been moved specifically for refusing the vaccine. There's speculation that that was just a scare tactic.

I was told that two of those II were guys on the pre-release quarantine who are either going home or to a halfway house or whatever. For now, guys on that type of quarantine are being kept locked in a call in the unit instead of being moved to F-North. They are brought meals whereas we're back to picking ours up outside of the Chow Hall.

Speaking of meals... this past Mon. they FINALLY started serving us hot dinners instead of bag meals! It is SO NICE to be able to eat something besides lunchmeat and peanut butter - which started over a year ago on April 1, 2020.

Naturally, the way this place handles passing out meals is retarded. When the first tier is out in the evening, it's handed out at some point during the later part of their 1 1/2 hour out of their cells, then they're locked up around 6:30p and the second tier is let out and waits to be called. So, if you want to take a shower in the evening, you have to be very careful about when you take it or we could get called to Chow and you'd miss out.

Yes, it's been a while. I'm still going through a funk which hasn't gotten better - if anything it's worse. Currently "Sex (I'm A...)" by Berlin is ending and "He's So Shy" by the Pointer Sisters is coming on.

One reason (besides the "funk") that I haven't been writing is 'cause my usual writing time has gone - but for a good reason.

I was in the habit of writing in the evening when the opposite tier was out. But... on May 23rd the C.D. on duty let both tiers out for the evening, so we were all out from 5-8:30p! Progress!

The word is that it's up to the CD & the Lt. on duty as to whether or not both tiers are out at night. The following three nights, 5/24-5/26, we were separated again. However, from 5/27 on, we've mostly been out together with a few exceptions. It's been great to be able to hang with some of the guys from the bottom tier and not have to yell through their doors.

On [[?]] I, four weeks after their first shot, the majority of the unit get their second Moderna shot, so now most everyone in this unit has been vaccinated.

The latest number I heard is that now there are only five guys who completely refused. Some rumors still say that they'll be moved and others are that they don't have enough non-vaccinated to fill a unit over the whole compound, so they may leave them. Who knows?

So far they haven't opened the compound any more, and we're still kept separate during the day. One guy who works at the Library told me that we're supposed to go back to normal in July, but I'm not holding my breath.

In past years I've probably mentioned how they don't have any plants on the compound - besides grass and any wild plants that managed to grow.

Well, there used to be a ring of bushes in the center of the compound (where we're usually not supposed to go), plus a few by the Chow Hall and more of [[page 5 is upside down]]

Oh! Almost forgot: this post Sat. when the bottom tier was out in the morning, two black guys got in a fight. The CO didn't see it & staff didn't find out till just before lunch when one of the guys "checked in".

Then after lunch my tier was let out. We were out long enough for me to eat & shower and then we were locked down for what the bottom tier did.