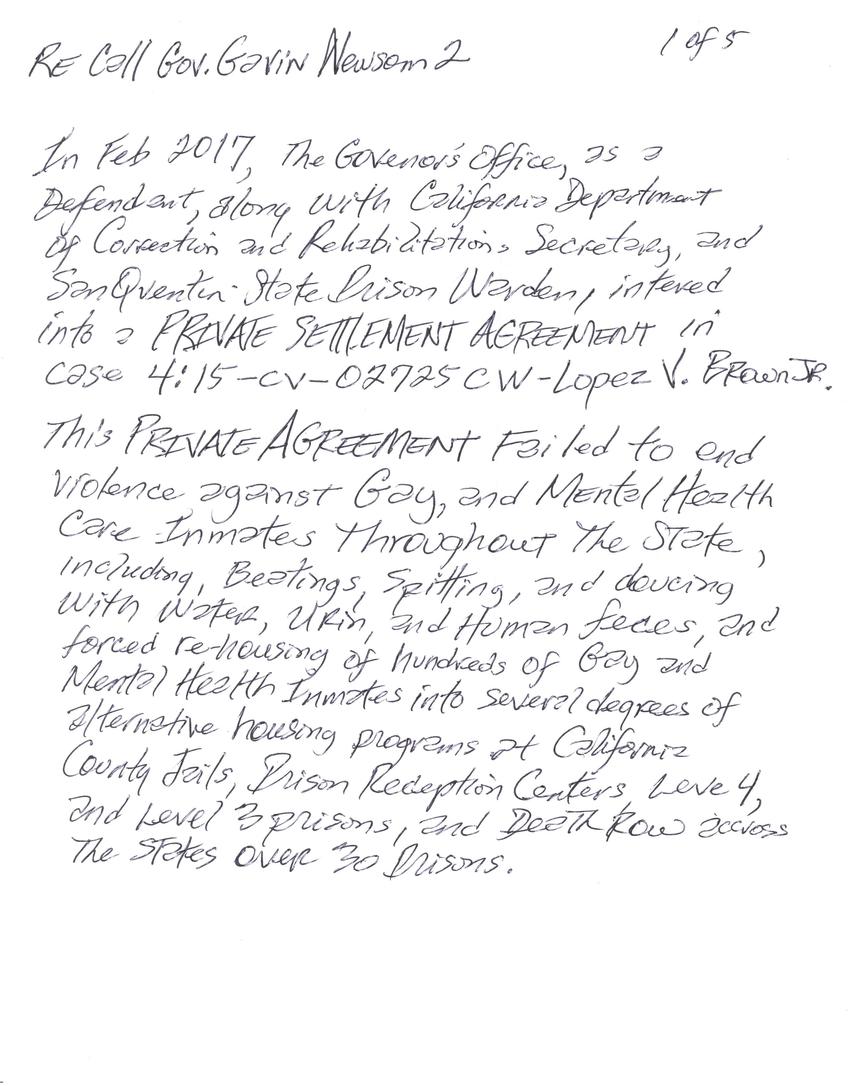 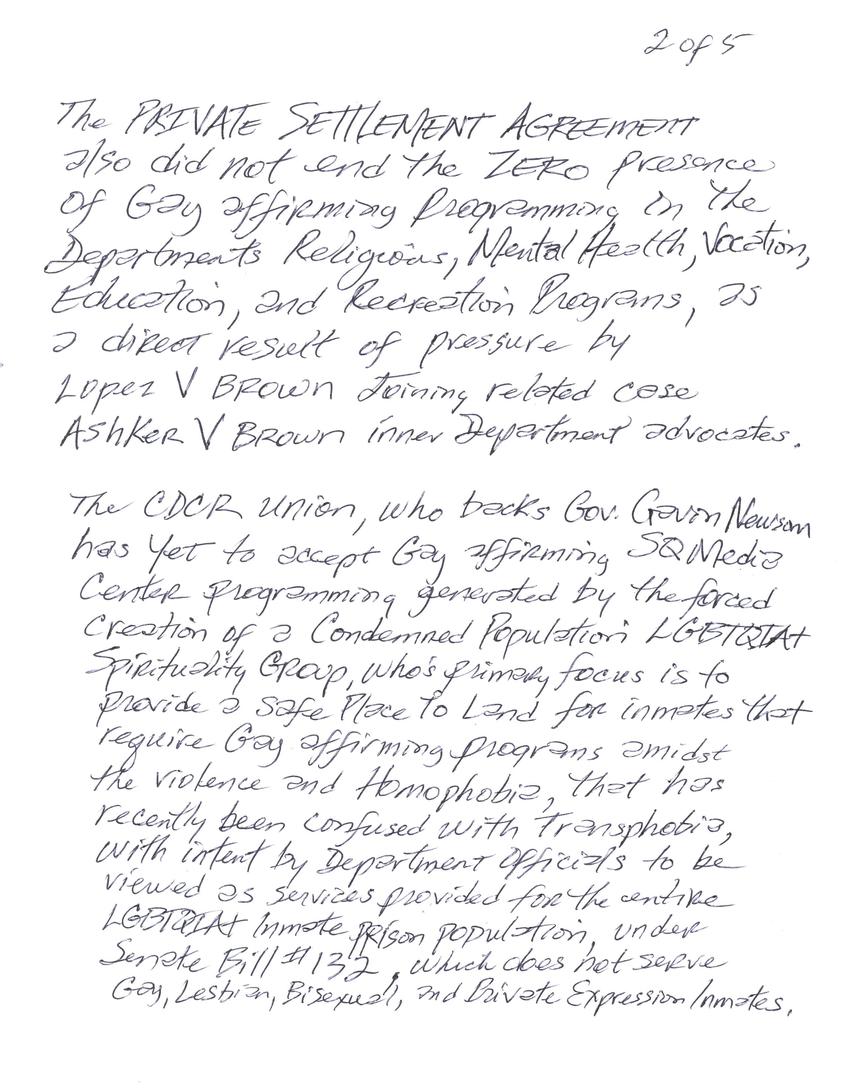 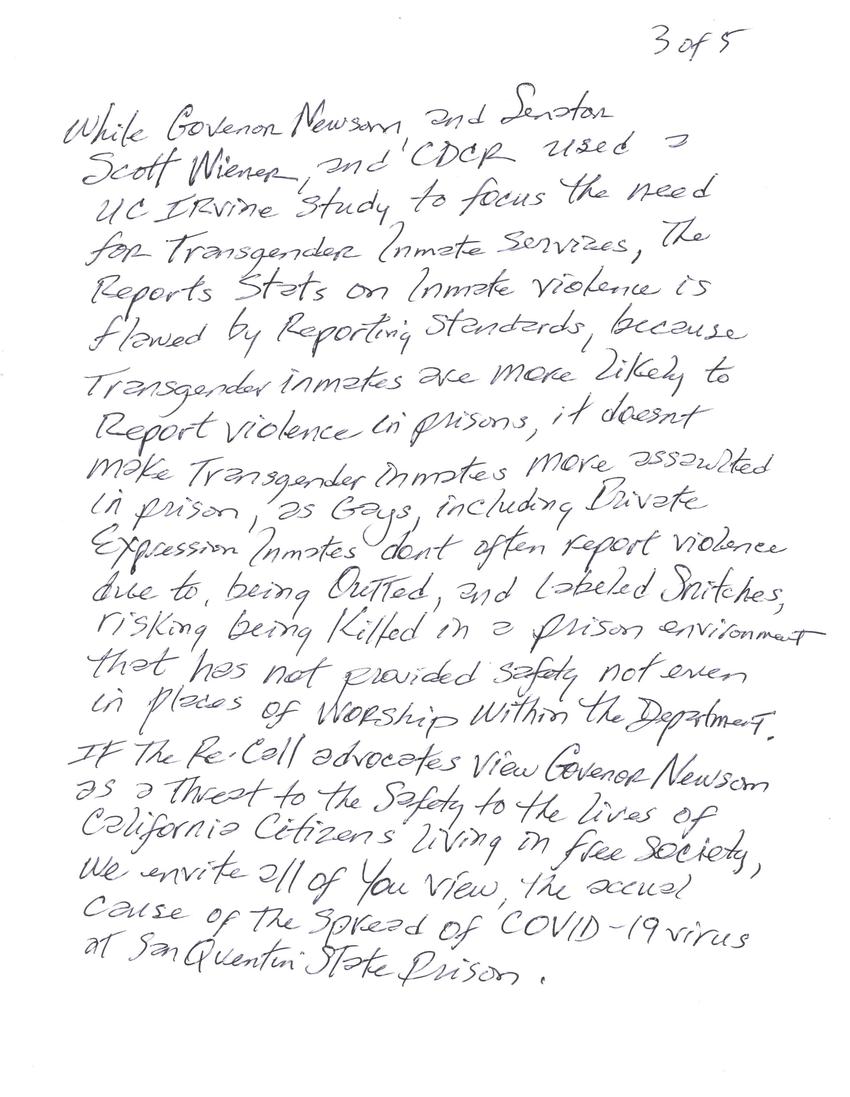 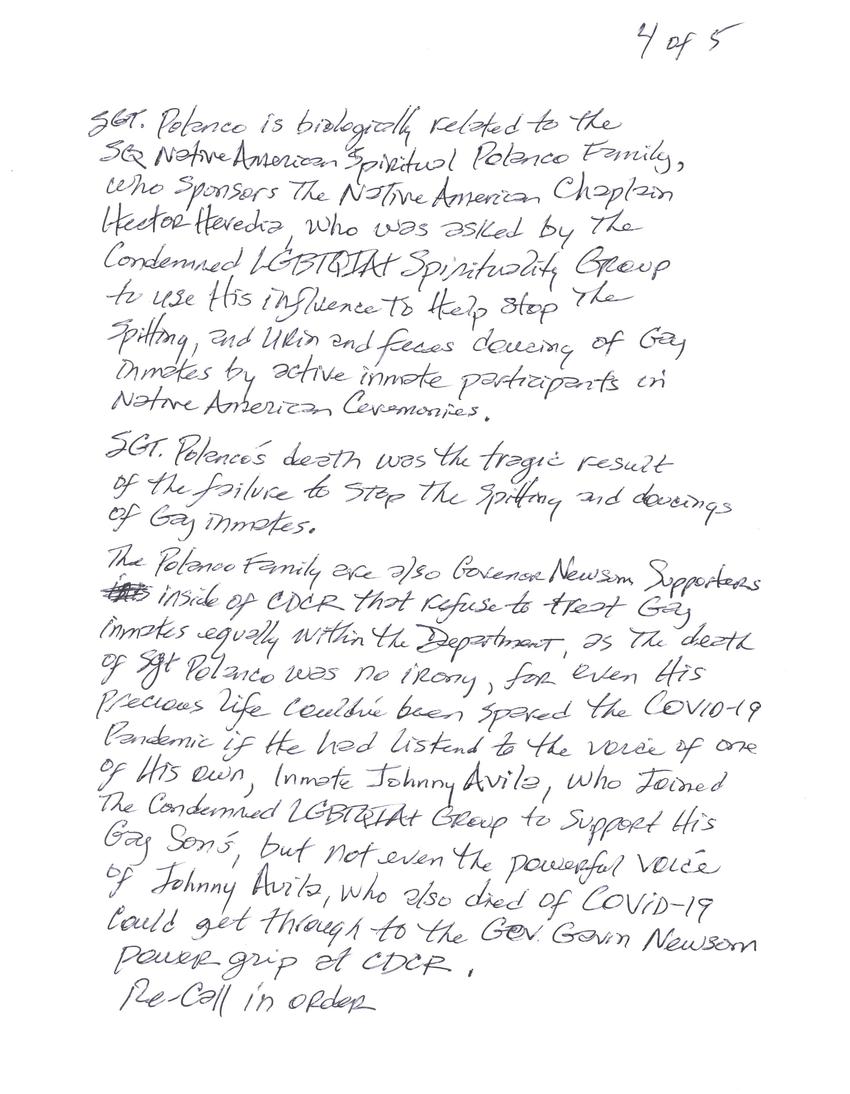 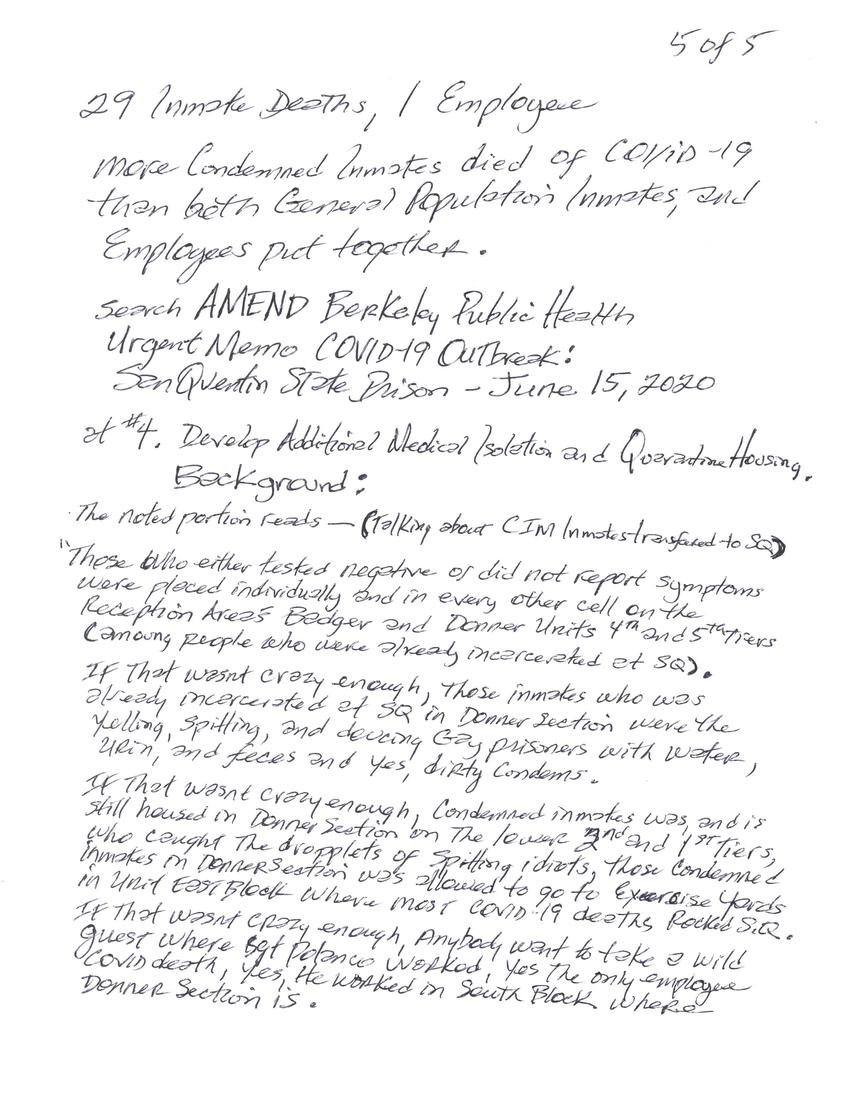 In Feb 2017, The Govenor's Office, as a
Defendent, along with California Department
of Correction and Rehabilitations Secretary, and
SanQentin State Prison Warden, intered
into a PRIVATE SETTLEMENT AGREEMENT in
case 4:15-cv-02725 CW-Lopez V. Brown JR.
This PRIVATE AGREEMENT Failed to end
violence against Gay, and MEntal Health
Care Inmates throughout the State,
including, Beatings, Spitting, and deucing
with water, urin, and Human feces, and
forced re-housing of hundreds of Gay and
MEntal Health Inmates into several degrees of
alternative housing programs at California
County Jails, Prison Redeption Centers, Leve 4,
and Level 3 prisons, and Death Row accross
The States over 30 prisons.
2 of 5
The PRIVATE SETTLEMENT AGREEMENT
also did not end the ZERO presence of
Gay affirming programming in the
Departments Religious, Mental Health, Vocation,
Education, and Recreation Programs, as
a direct result of pressure by
Lopez V BROWN Joining related cose
ASKER V Brown inner Deparment advocates.
The CDCR union, who backs Gov. Gavin Newsom
has yet to accept Gay affirming SQMedia
center programming generated by the forced
creation of a Condemned Population LGBTQIA+
Spirituality Group, who's primary focus is to
provide a safe space to Land for inmates that
require Gay affirming programs admidst
the violence and Homophobia, that has
recently been confused with Transphobia,
with intent by Department Officials to be
viewed as services provided for the entire
LGBTQIA+ Inmate prison population, under
Senate Bill #132, which does not serve
Gay, Lesbian Bisexual and Private Expression Inmates.
3 of 5
While Govenor Newsom, and Senator
Scott Weiner, and DCDR used a
UC Irvine Study to focus the need
for Transgender Inmate Services, The
Reports Stats on Inmate violence is
flawed by Reporting Standards, because
Transgender inmates are more likely yo
Report violence in prisons, it doesn't
make Transgender inmates more assaulted
in prison, as Gays, including Private
Expression Inmates dont often report violence
due to being Outed, and labeled Snitches,
risking being killed in a prison environment
that has not provided safety not even
in places of Worship Within the Department.
IF The Re-Call advocates View Govenor Newsom
as a Threat to the Safety to the lives of
California Citizens living in fee society,
We invite all of You view, the actual
cause of The Spread of COVID-19 virus
at San Quentin State Prison.
4 of 5
SGT. Polenco is biologically related to the
SQ Native American Chaplain
Hector Herechia, who was asked by The
Condemned LGBTQIA+ Spirtuality Group
to use His influence To Help stop The
Spitting, and Urin and feces deucing of Gay
inmates by active inmate participants in
Native American Ceremonies.
SGT. Polanco's death was the tragic result
of the failure to stop the spitting and deucing
of Gay inmates.
The Polanco Family are also Govenor Newsom Supporters
inside of CDCR that refuse to treat Gay
inmates equally within the Department, as the death
of sgt Polenco was no irony, for even His
precious life could've been spared the COVID-19
Pandemic if He had listened to the [?] of one
of His own, inmate Johnny Avile, who Joined
The Condemned LGBTQIA + Group to support His
Gay Son's, but not even the powerful [?]
of Johnny Avile, who also dies of COVID-19
could get through to the Gov. Gavin Newson
Power grip at CDR.
Re-call in order
5 of 5
29 Inmate Deaths, 1 Employee
More Condemned Inmates died of COVID-19
than both general population Inmates, and
Employees put together.
Search AMEND Berkeley Public Health
Urgent Memo COVID-19 Outbreak:
SanQuentin State Prison - June 15,2020
at #4. Develop Additional Medical Isolation and Quarantine Housing.
Background: The noted portion reads-(Talking about CIM inmates transferred to SQ)
"Those who either tested negative or did not report symptoms
were placed individually and in every other cell on the
reception Area's Badger and Donner Unites 4th and 5th tiers
(among people who were already incarcerated at SQ).
If that wasnt crazy enough, those inmates who was
already incarcerated at SQ in Donner section were the
yelling, spitting, and deucing Gay prisoners with water,
urin, and feces and yes, dirty condoms.
If that wasnt crazy enough, condemned inmates was and is
still housed in Donner section on the lower 2nd and 1st Tiers,
who caught the droplets of spitting idiots, those condemned
inmates in Donners section was allowed to go to exercise yards
If that wasnt crazy enough, anybody want to take a wild
guess where sgt Polanco worked, yes the only employee
COVID death, yes, He worked in South Block where
Sonner section is.