Where is the due process of law? 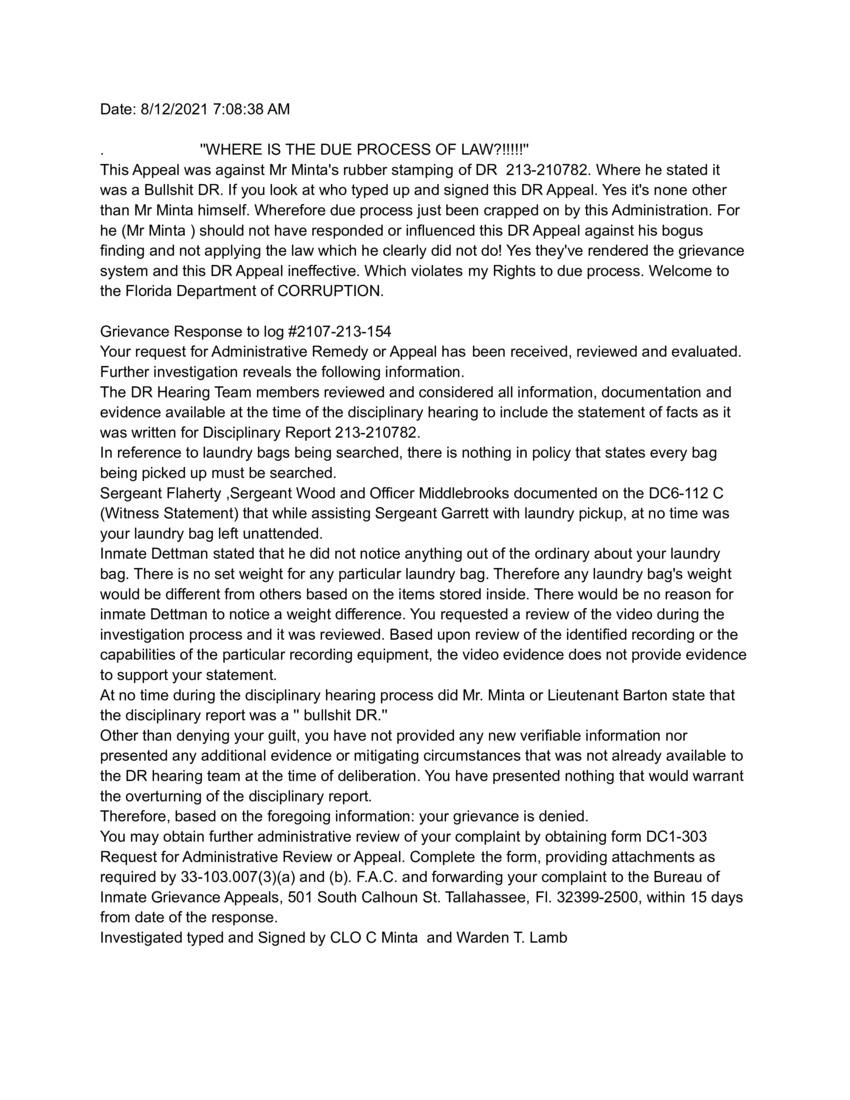 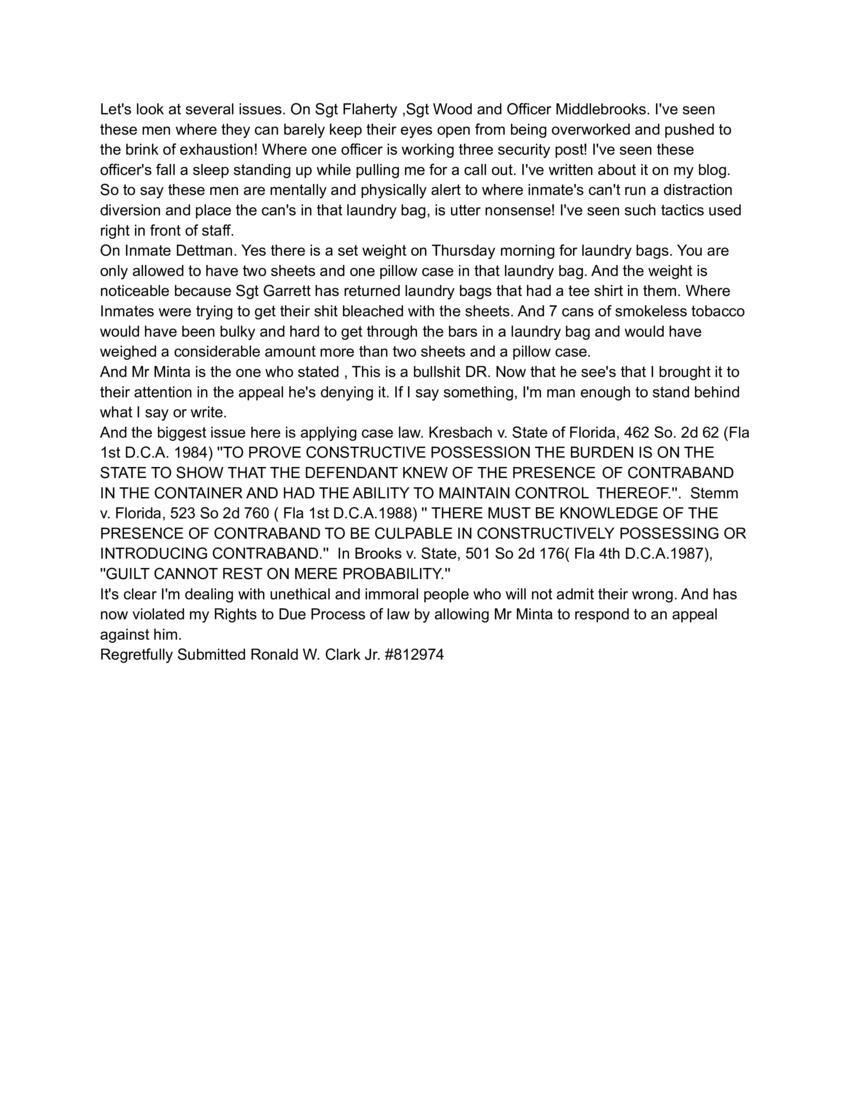 This Appeal was against Mr Minta's rubber stamping of DR 213-210782. Where he stated it was a Bullshit DR. If you look at who typed up and signed this DR Appeal. Yes it's none other than Minta himself. Wherefore due process just crapped on by this Administration. For he (Mr Minta) should not have responded or influenced this DR Appeal against his bogus finding and not applying the law which he clearly did not do! Yes they've rendered the grievance system and DR Appeal ineffective. Which violates my Rights to due process. Welcome to the Florida Department of CORRUPTION.

Grievance Response to log #2107-213-154
Your request for Administrative Remedy or Appeal has been received, reviewed and evaluated. Further investigation reveals the following information. The DR Hearing Team members reviewed and considered all information, documentation and evidence available at the time of the disciplinary hearing to include the statement of facts as it as written for Disciplinary Report 213-210782.
In reference to laundry bags being searched, there is nothing in policy that states every bag being picked up must be searched.
Sergeant Flaherty, Sergeant Wood and Officer Middlebrooks documented on the DC6-112 C (Witness Statement) that while assisting Sergeant Garrett with laundry pickup, at no time was your laundry bag left unattended.
Inmate Dettman stated that he did not notice anything out the ordinary about your laundry bag. There was no set weight for any particular laundry bag. Therefore any laundry bag's weight would be different from others based on the items stored inside. There would be no reason for inmate Dettman to notice a weight difference. You requested a review of the video during the investigation process and it was reviewed. Based upon review of the identified recording or the capabilities of the particular recording equipment, the video evidence does not provide evidence to support your statement.
At no time during the disciplinary hearing process did Mr. Minta or Lieutenant Barton state that the disciplinary report was a " bullshit DR."
Other than denying your guilt, you have not provided any new verifiable information nor presented any additional evidence or mitigating circumstance that was not already available to the DR hearing team at the time of deliberation. You have presented nothing that would warrant the overturning of the disciplinary report.
Therefore, based on the foregoing information: your grievance is denied.
You may obtain further administrative review of your complaint by obtaining form DC1-303 Request for Administrative Review or Appeal. Complete the form, providing attachments as required by 33-103.007(3)(a) and (b). F.A.C. and forwarding your complaint to the Bureau of Inmate Grievance Appeals, 501 South Calhoun St. Tallahassee, Fl. 32399-2500, within 15 days from date of the response.
Investigated typed and Signed by CLO C Minta and Warden T. Lamb.

Lets look at several issues. On Sgt Flaherty, Sgt Wood and Officer Middlebrooks. I've seen these men where they can barely keep their eyes open from being overworked and pushed to the brink of exhaustion! Where one officer is working three security posts! I've seen these officer's fall a sleep standing up while pulling me for a call out. I've written about it on my blog. So to say these men are mentally and physically alert to where inmate's can't run a distraction diversion and place the can's in that laundry bag, it utter nonsense! I've seen such tactics used right in front of staff.
On Inmate Dettman. Yes there is a set weight on Thursday morning for laundry bags. You are only allowed to have two sheets and one pillow case in that laundry bag. And the weight is noticeable because Sgt Garrett has returned laundry bags that had a tee sheet in them. Where Inmates were trying to get their shit bleached with the sheets. And 7 cans of smokeless tobacco would have been bulky and hard to get through the bards in a laundry bag and would have weighed a considerable amount more than two sheets and a pillow case.
And Mr Minta is the one who stated, This is bullshit DR. Now that he see's that I brought it to their attention in the appeal he's denying it. If I say something, I'm man enough to stand behind what I say or write.
And the biggest issue here is applying case law. Kresbach v. State of Florida, 462 So. 2d 62 (Fla 1st D.C.A. 1984) "TO PROVE CONSTRUCTIVE POSSESSION THE BURDEN IS ON THE SATE TO SHOW THAT THE DEFENDANT KNEW OF THE PRESENCE OF CONTRABAND IN THE CONTAINER AND HAD THE ABILITY TO MAINTAIN CONTROL THEREOF.". Stemm v. Florida, 523 So 2d 760 (Fla 1st D.C.A. 1988) "THERE MUST BE KNOWLEDGE OF THE PRESENCE OF CONTRABAND TO BE CULPABLE IN CONSTRUCTIVELY POSSESSING OR INTRODUCING CONTRABAND." In Brooks v. State, 501 So 2d 176( Fla 4th D.C.A.1987), "GUILT CANNOT REST ON MERE PROBABILITY."
It's clear I'm dealing with unethical and immoral people who will not admit their wrong. And has now violated my Rights to DUe Process of law by allowing Mr Minta to respond to an appeal against him.
Regretfully Submitted Ronald W. Clark Jr. #812974