Something Can Be Done About It 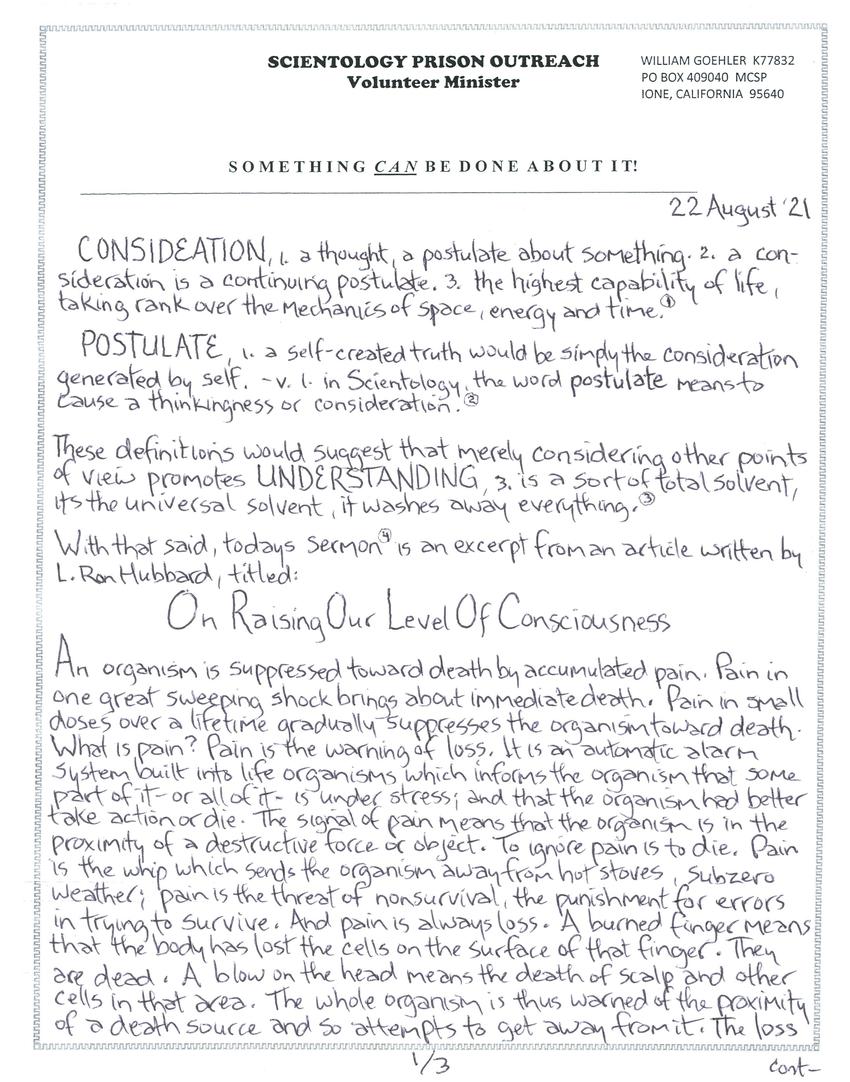 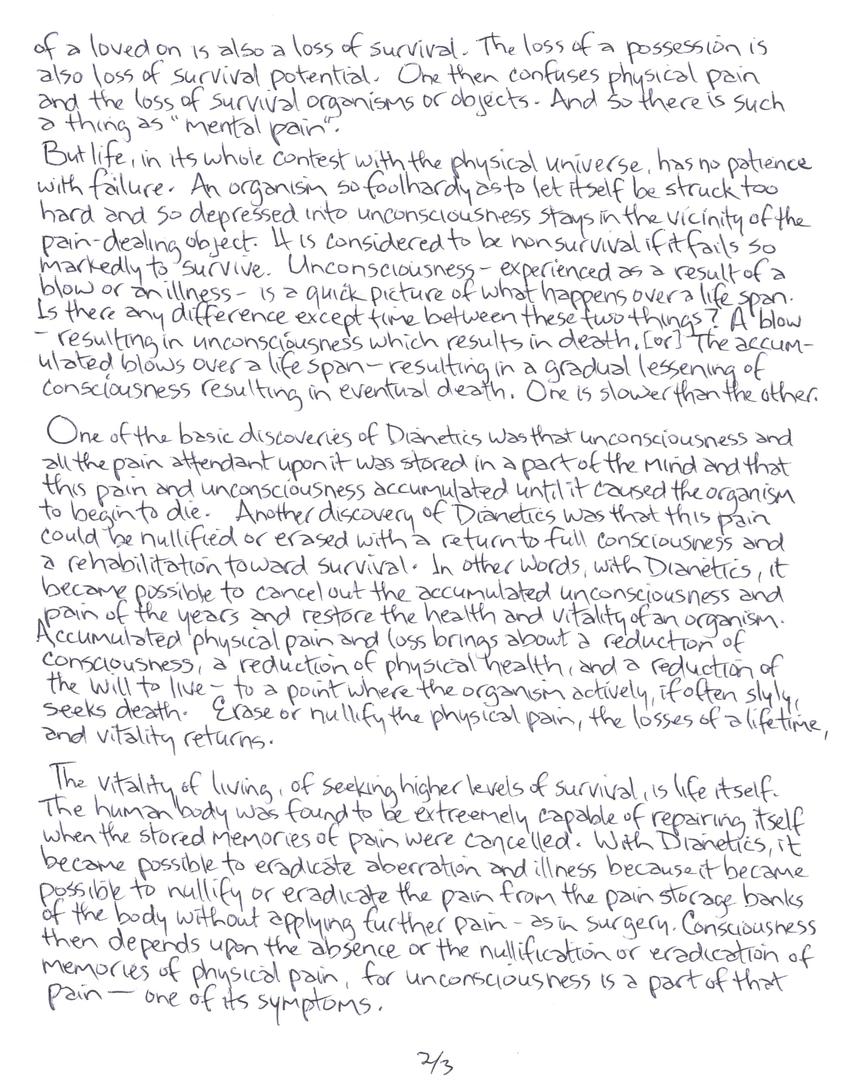 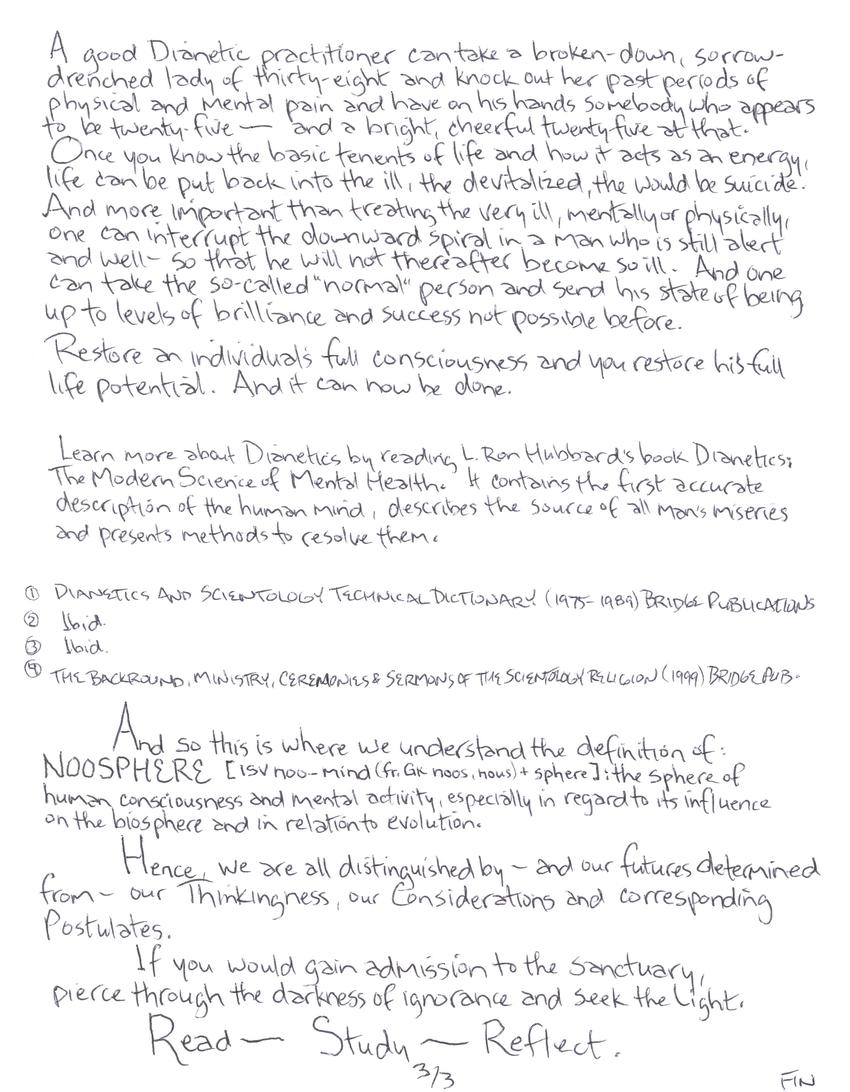 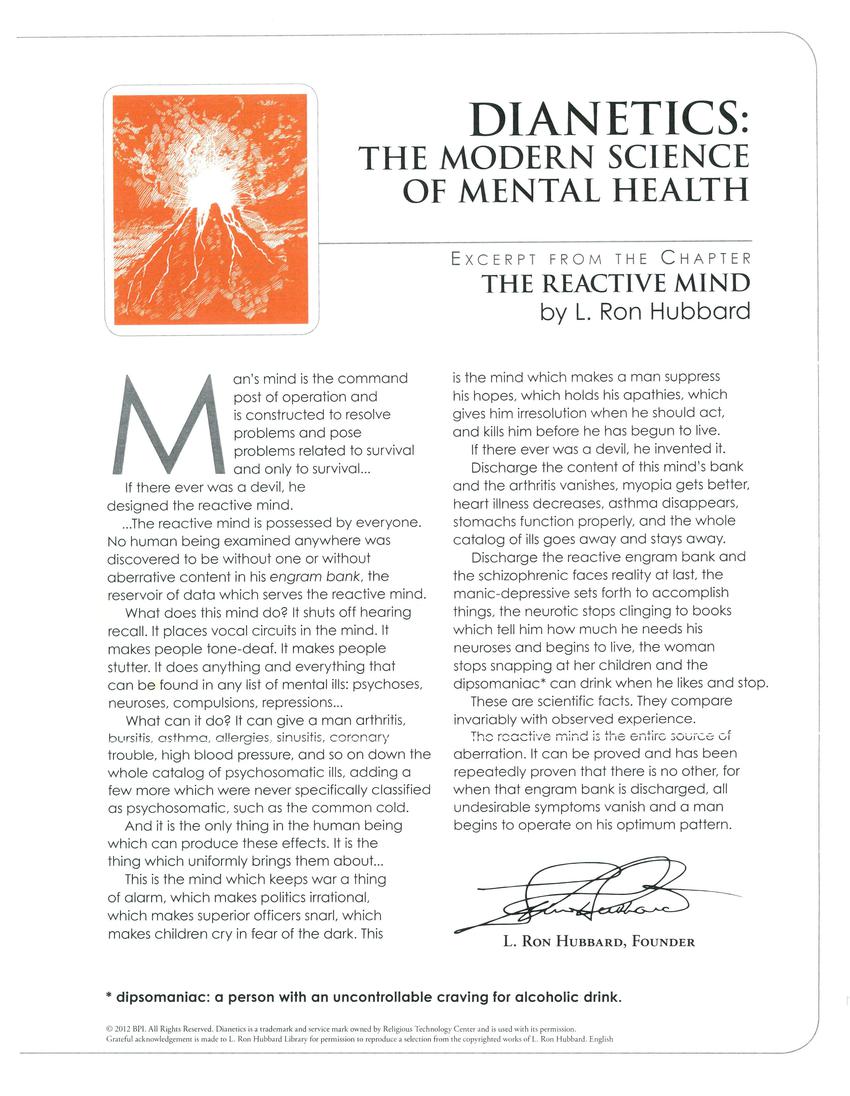 SOMETHING CAN BE DONE ABOUT IT:

CONSIDERATION, 1. a thought, a postulate about something. 2. a consideration is a continuing postulate. 3. the highest capability of life, taking a rank over the mechanics of space, energy and time.①
POSTULATE, 1. a self-created truth would be simply the consideration generated by self. -v.1- in Scientology, the word postulate means to cause a thinkingness or consideration.②
These definitions would suggest that merely considering other points of view promotes UNDERSTANDING, 3. is a sort of total solvent, its the universal solvent, it washes away everything.③
With that said, todays sermon④ is an excerpt from an article written by L. Ron Hubbard, titled
On Raising Our Level of Consciousness
An organism is suppressed toward death by accumulated pain. Pain in one great sweeping shock brings about immediate death. Pain in small doses over a lifetime gradually suppresses the organism toward death. What is pain? Pain is the warning of loss. It is an automatic alarm system built into life organisms which informs the organism that some part of it - or all of it - is under stress; and that the organism had better take action or die. The signal of pain means that the organism is in the proximity of a destructive force or object. To ignore pain is to die. Pain is the whip which sends the organism away from hot stoves, subzero weather; pain is the threat of nonsurvival, the punishment for errors in trying to survive. And pain is always loss. A burned finger means that the body has lost the cells on the surface of that finger. They are dead. A blow on the head means the death of scalp and other cells in that area. The whole organism is thus warned of the proximity of a death source and so attempts to get away from it. The loss
1/3 cont-

of a loved one is also a loss of survival. The loss of a possession is also the loss of survival potential. One then confuses physical pain and the loss of survival organisms or objects. And so there is such a thing as "mental pain".
But life, in its whole contest with the physical universe, has no patience with failure. An organism so fool hardly as to let itself be struck too hard and so depressed into unconsciousness stays in the vicinity of the pain-dealing object. It is considered to be nonsurvival if it fails so markedly to survive. Unconsciousness - experienced as a result of a blow or an illness - is a quick picture of what happens over a life span. Is there any difference except time between these two things? A blow - resulting in unconsciousness which results in death. [or] The accumulated blows over a life span - resulting in a gradual lessening of consciousness resulting in eventual death. One is slower than the other.

One of the basic discoveries of Dianetics was that unconsciousness and all the pain attendant upon it was stored in a part of the mind and that this pain and unconsciousness accumulated until it caused the organism to begin to die. Another discovery of Dianetics was that this pain could be nullified or erased with a return of full unconsciousness and a rehabilitation toward survival. In other words, with Dianetics, it became possible to cancel out the accumulated unconsciousness and pain of the years and restore the health and vitality of an organism. Accumulated physical pain and loss brings about a reduction of consciousness, a reduction of physical health, and a reduction of the will to live - to a point where the organism actively, if often slyly, seeks death. Erase or nullify the physical pain, the losses of a lifetime, and vitality returns.
The vitality of living, of seeking higher levels of survival is life itself. The human body was found to be extremely capable of repairing itself when the stored memories of pain were cancelled. With Dianetics, it became possible to eradicate aberration and illness because it became possible to nullify or eradicate the pain from the pain storage banks of the body without applying further pain - as in surgery. Consciousness then depends upon the absence or the nullification or eradication of memories of physical pain, for unconsciousness is a part of that pain - one of its symptoms.
2/3

A good Dianetic practitioner can take a broken-down, sorrow-drenched lady of thirty-eight and knock out her past periods of physical and mental pain and have on his hands somebody who appears to be twenty-five - and a bright, cheerful twenty five at that. Once you know the basic tenants of life and how it acts as an energy, life can be put back into the ill, the devitalized, the would be suicide. And more important than treating the very ill, mentally or physically, one can interrupt the downward spiral in a man who is still alert and well - so that he will not there after become so ill. And one can take the so-called "normal" person and send his state of being up to levels of brilliance and success not possible before.
Restore an individual's full consciousness and you restore his full life potential. And it can now be done.

Learn more about Dianetics by reading L. Ron Hubbard's book Dianetics: The Modern Science of Mental Health. It contains the first accurate description of the human mind, describes the source of all man's miseries and presents methods to resolve them.

And so this is where we understand the definition of NOOSPHERE [isvnoo-mind (fr.Gk noos, nous) + sphere]: the sphere of human consciousness and mental activity, especially in regard to its influence on the biosphere and in relation to evolution.
Hench, we are all distinguished by - and our futures determined from - our Thinkingness, our Considerations and corresponding Postulates.
If you would gain admission to the sanctuary, pierce through the darkness of ignorance and seek the light.
Read ~ Study ~ Reflect
3/3

EXCERPT FROM THE CHAPTER
THE REACTIVE WORLD
by L. Ron Hubbard

Man's mind is the command post of operation and is constructed to resolve problems and pose problems related to survival and only to survival...
If there ever was a devil, he designed the reaction mind.
...The reactive mind is possessed by everyone. No human being examined anywhere was discovered to be without one or without aberrative content in his engram bank, the reservoir of data which serves the reactive mind.
What does this mind do? It shuts off hearing recall. It places vocal circuits in the mind. It makes people tone-deaf. It makes people stutter. It does anything and everything that can be found in any list of mental ills: psychoses, neuroses, compulsions, repressions...
What can it do? It can give a man arthritis, bursitis, asthma, allergies, sinusitis, coronary trouble, high blood pressure, and so on down the whole catalog of psychosomatic ills, adding a few more which were specifically classified as psychosomatic, such as the common cold.
And it is the only thing in the human being which can produce these effects. It is the thing which uniformly brings them about...
This is the mind which keeps war a thing of alarm, which makes politics irrational, which makes superior officers snarl, which makes children cry in fear of the dark. This is the mind which makes a man suppress his hopes, which holds his apathies, which gives him irresolution which he should act, and kills him before he has begun to live.
If there ever was a devil, he invented it.
Discharge the content of this mind's bank and the arthritis vanishes, myopia gets better, heart illness decreases, asthma disappears, stomachs function properly, and the whole catalog of ills goes away and stays away.
Discharge the reactive engram bank and the schizophrenic faces reality at last, the manic-depressive sets forth to accomplish things, the neurotic stops clinging to books which tell him how much he needs his neuroses and begins to live, the woman stops snapping at her children and the dipsomaniac* can drink when he likes and stop.
These are scientific facts. They compare invariably with observed experience.
The reactive mind is the entire source of aberration. It can be proved and has been repeatedly proven that there is no other, for when that engram bank is discharged, all undesirable symptoms vanish and a man begins to operate on his optimum pattern.

*dipsomaniac: a person with an uncontrollable craving for alcoholic drink.
Ⓒ 2021 BPI. All Rights Reserved. Diametrics is a trademark and service mark owned by Religious Technology Center and is used with its permission. Grateful acknowledgement is made to 1. Ron Hubbard Library for permission so reproduce a selection from the copyrighted works of L. Ron Hubbard. English