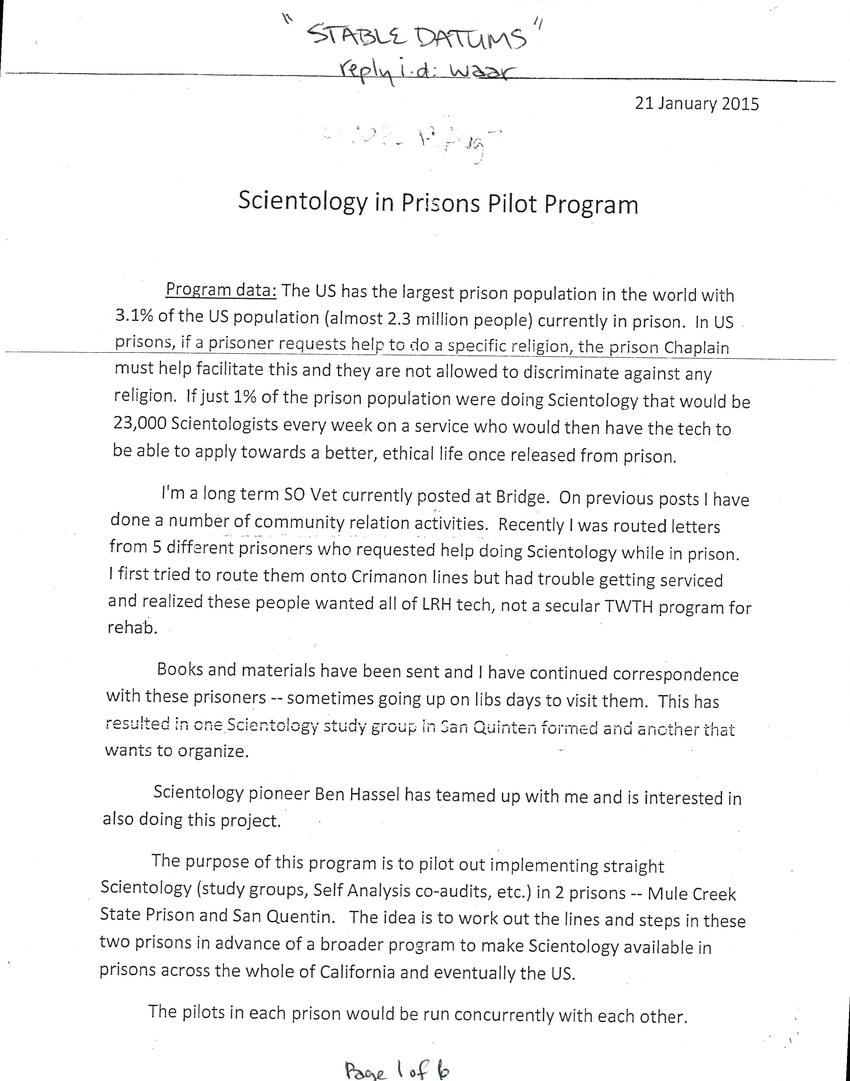 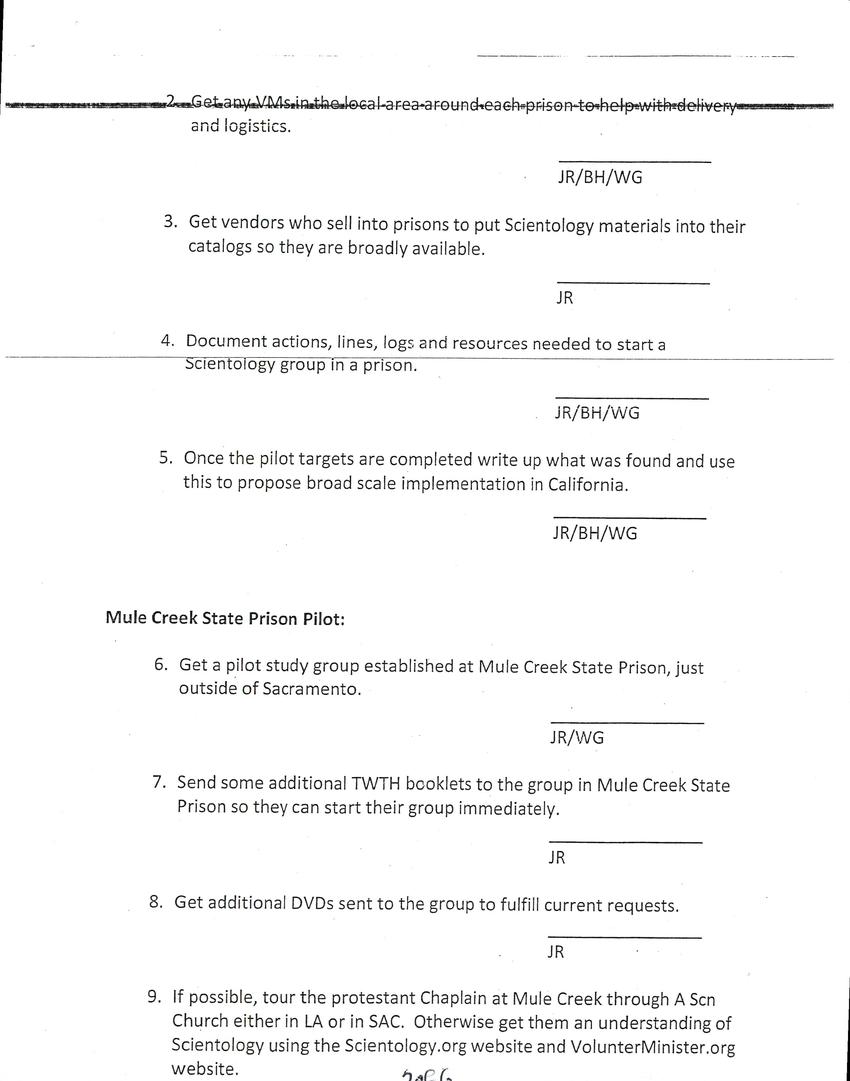 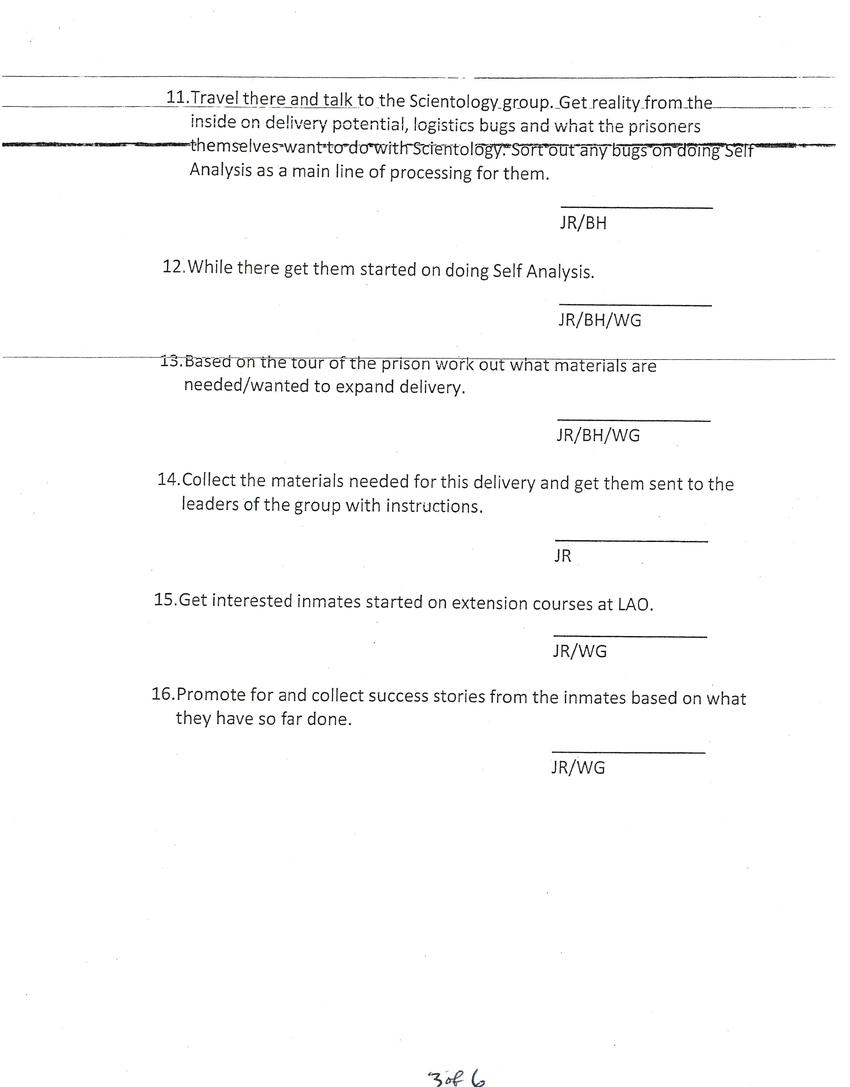 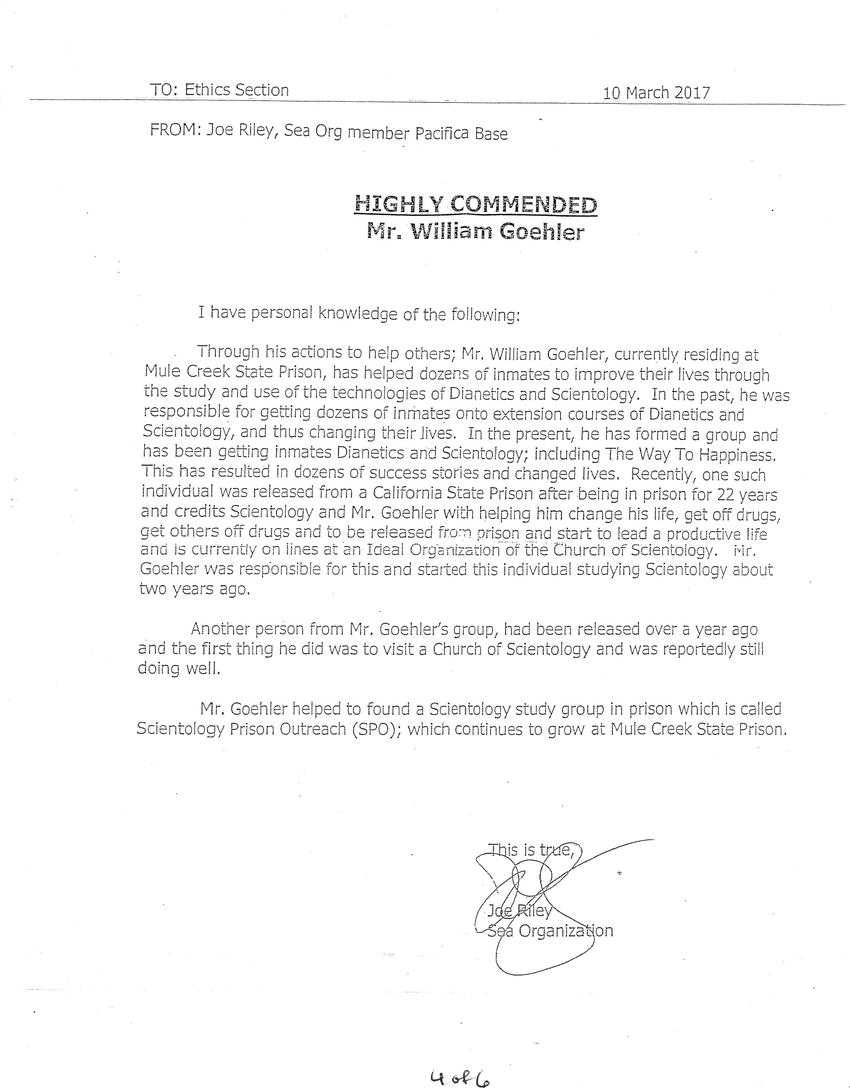 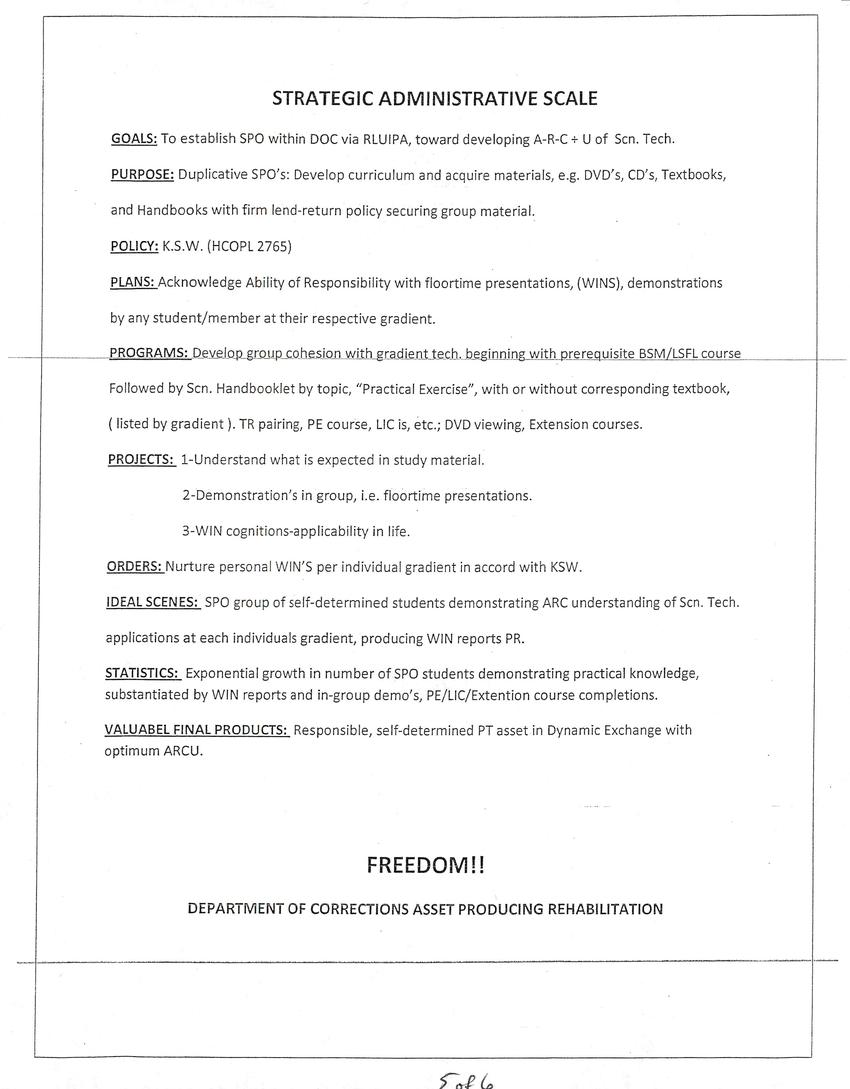 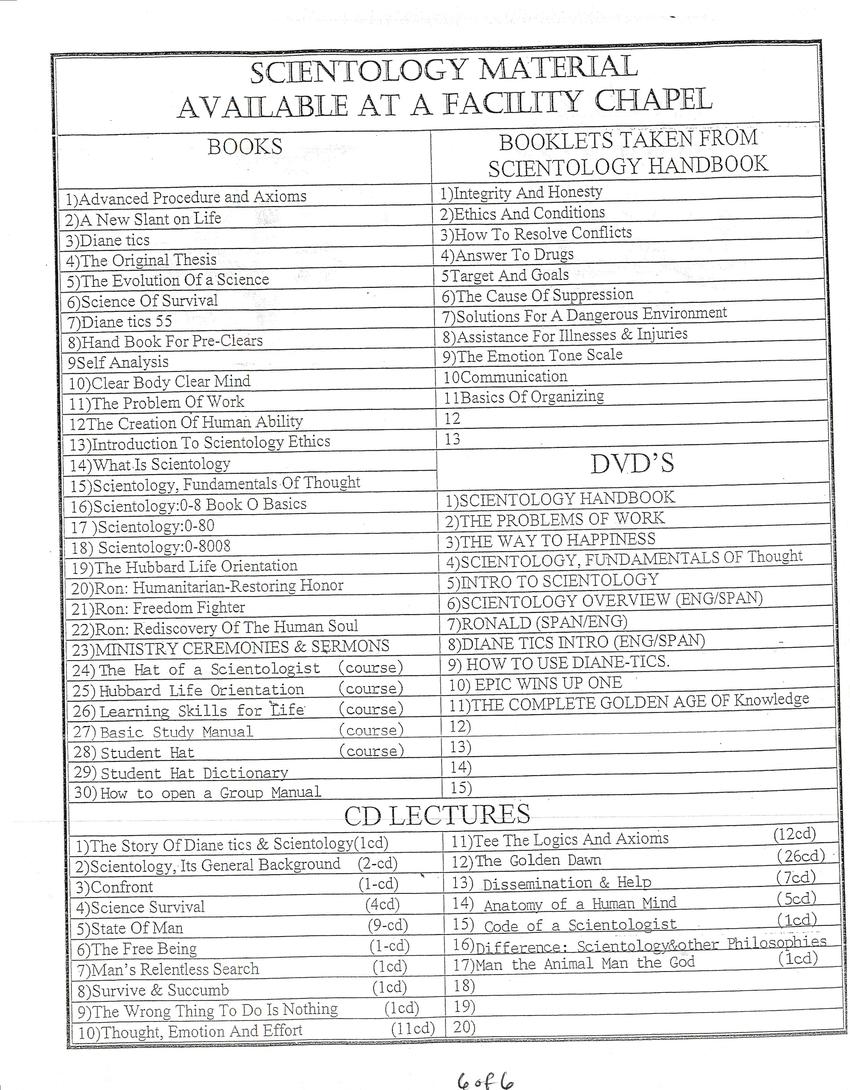 Program data: The US has the largest prison population in the world with 3.1% of the US population (almost 2.3 million people) currently in prison. In US prisons, if a prisoner requests help to do a specific religion, the prison Chaplain must help facilitate this and they are not allowed to discriminate against any religion. If just 1% of the prison population were doing Scientology that would be 23,000 Scientologists every week on a service who would then have the tech to be able to apply towards a better, ethical life once released from prison.

I'm a long term SO Vet currently posted at Bridge. On previous posts I have done a number of community relation activities. Recently I was routed letters from 5 different prisoners who requested help doing Scientology while in prison. I fist tried to route them onto Crimanon lines but had trouble getting serviced and realized these people wanted all of LRH tech, not a secular TWTH program for rehab.

Books and materials have been sent and I have continued correspondence with these prisoners -- sometimes going up on libs days to visit them. This has resulted in one Scientology study group in San Quinten formed and another that wants to organize.

Scientology pioneer Ben Hassel has teamed up with me and is interested in also doing this project.

The purpose of this program is to pilot out implementing straight Scientology (study groups, Self Analysis co-audits, etc.) in 2 prisons -- Mule Creek State Prison and San Quentin. The idea is to work out the lines and steps in these two prisons in advance of a broader program to make Scientology available in prisons across the whole of California and eventually the US.

The pilots in each prison would be run concurrently with each other.

2. Get any VMs in the local area around each prison to help with delivery and logistics.
JR/BH/WG

3. Get vendors who sell into prisons to put Scientology materials into their catalogs so they are broadly available.
JR

4. Document actions, lines, logs and resources needed to start a Scientology group in a prison.
JR/BH/WG

5. Once the pilot targets are completed write up what was found and use this to propose broad scale implementation in California.
JR/BH/WG

6. Get a pilot study group established at Mule Creek State Prison, just outside of Sacramento.
JR/WG

7. Send some additional TWTH booklets to the group in Mule Creek State Prison so they can start their group immediately.
JR

8. Get additional DVDs sent to the group to fulfill current requests.
JR

9. If possible, tour the protestant Chaplain at Mule Creek through A Scn Church either in LA or in SAC. Otherwise get them an understanding of Scientology using the Scientology.org website and VolunterMinister.org website.

11. Travel there and talk to the Scientology group. Get reality from the inside on delivery potential, logistics bugs and what the prisoners themselves want to do with Scientology. Sort out any bugs on doing Self Analysis as a main line of processing for them.
JR/BH

12. While there get them started on doing Self Analysis.
JR/BH/WG

13. Based on the tour of the prison work out what materials are needed/wanted to expand delivery.
JR/BH/WG

14. Collect the materials needed for this delivery and get them sent to the leaders of the group with instructions.
JR

15. Get interested inmates started on extension courses at LAO.
JR/WG

16. Promote for and collect success stories from the inmates based on what they have so far done.
JR/WG

I have personal knowledge of the following:

Through his actions to help others; Mr. William Goehler, currently residing at Mule Creek State Prison, has helped dozens of other inmates to improve their lives through the study and use of the technologies of Dianetics and Scientology. In the past, he was responsible for getting dozens of inmates onto extension courses of Dianetics and Scientology, and this changing their lives. In the present, he has formed a group and has been getting inmates Dianetics and Scientology; including The Way To Happiness. This has resulted in dozens of success stories and changed lives. Recently, one such individual was released from a California State Prison after being in prison for 22 years and credits Scientology and Mr. Goehler with helping him change his life, get off drugs, get others off drugs and to be released from prison and start to lead a productive life and is currently on lines at an Ideal Organization of the Church of Scientology. Mr. Goehler was responsible for this and started this individual studying Scientology about two years ago.

Another person from Mr. Goehler's group, had been released over a year ago and the first thing he did was to visit a Church of Scientology and was reportedly still doing well.

GOALS: To establish SPO within DOC via RLUIPA, toward developing A-R-C + U of Scn. Tech.

PLANS: Acknowledge Ability of Responsibility with floortime presentations, (WINS), demonstrations by any student/member at their respective gradient.

ORDERS: Nurture personal WIN's per individual gradient in accord with KSW.

1)SCIENTOLOGY HANDBOOK
2)THE PROBLEMS OF WORK
3)THE WAY TO HAPPINESS
4)SCIENTOLOGY, FUNDAMENTALS OF Thought
5)INTRO TO SCIENTOLOGY
6)SCIENTOLOGY OVERVIEW (ENG/SPAN)
7)RONALD (SPAN/ENG)
8)DIANE TICS INTRO (ENG/SPAN)
9)HOW TO USE DIANE-TICS.
10)EPIC WINS UP ONE
11)THE COMPLETE GOLDEN AGE OF Knowledge
12)
13)
14)
15)